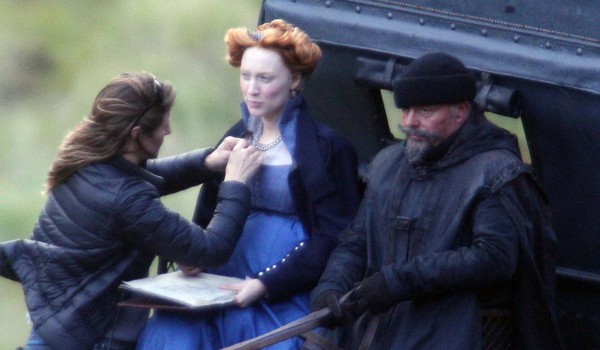 I know, I know, I should pace myself because Mary, Queen of Scots, starring Saoirse Ronan as my favorite Scottish queen and her cuz Elizabeth, played by Margot Robbie, won’t be released until November 2018. I already bitched about it when the first promo photos came out. But dammit, there’s more pictorial evidence of this shitshow, and I can’t deal.

First, let’s address the newest cast member we see — Gemma Chan plays Bess of Hardwick. Now we’ve mentioned Bess before as an incredibly interesting Renaissance woman worth her own movie, because she was ambitious, rich, and connected to several of the great dramas of the time. In this flick, she’s probably being brought in because she and her fourth husband were Mary Stuart’s jailers from 1569 until Mary’s execution in 1587.

My issue with Chan being cast as Bess is NOT because she’s of Chinese heritage (hell, so am I). That makes zero difference. My problem is that she’s too damn young, making it look like this movie is about three twenty-something gal-pals in fancy dresses. Hello, Reign, already covered that territory! Bess was born in 1527, Elizabeth I was born in 1533, Mary Stuart was born in 1542. That’s a 15-year spread, and yes, it makes a difference. At the very least, the ladies should look different from each other because of their ages. 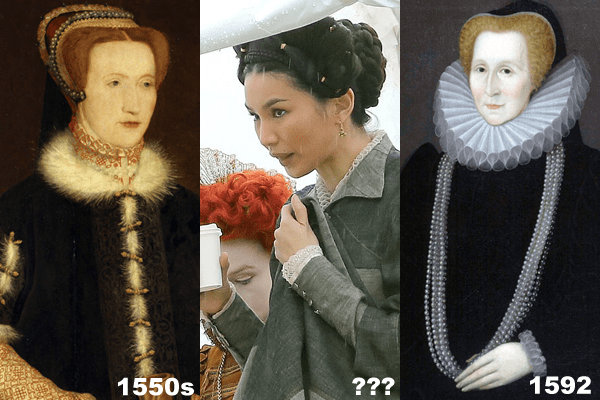 Actual portraits of Bess of Hardwick vs. behind-the-scenes photo of Gemma Chan as Bess.

OK, fine, they’re going full-on Reign here. I guess it just gives us more to snark. So let’s have at. You may have seen the next photo already, but to recap — it’s a high-school theater version of QEI’s Darnley Portrait gown! 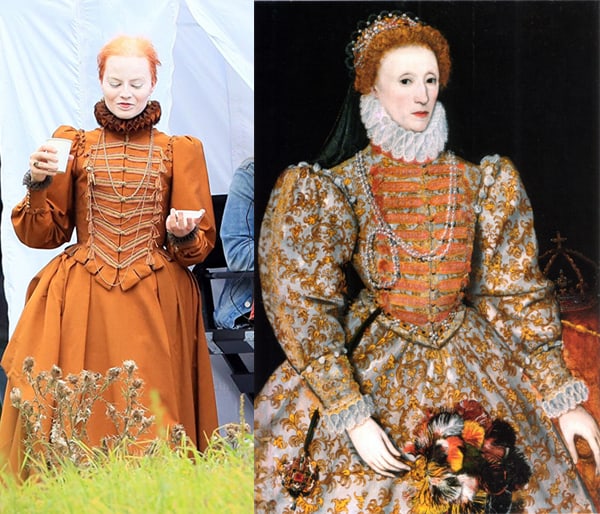 Why reproduce one of the three most well-known Queen Elizabeth I portraits and then do such a shitty job? Why? 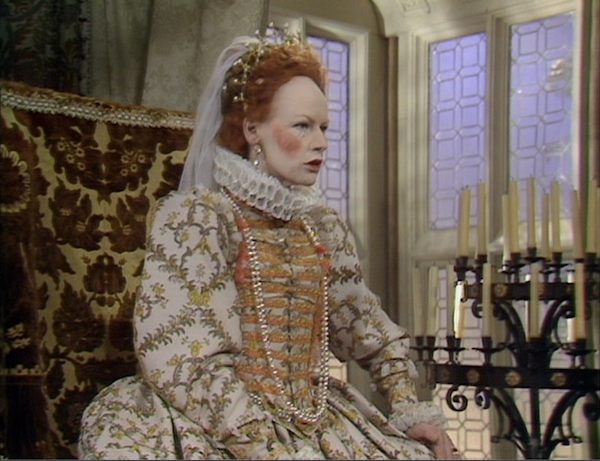 Especially when it’s been reproduced so perfectly on screen already back in 1971 for the BBC’s Elizabeth R? WHY BOTHER!?!

It must be said that this Mary, Queen of Scots movie’s costume designer is Alexandra Byrne, who did the costumes for Shekhar Kapur’s Elizabeth (1998) and Elizabeth: The Golden Age (2007), which is why this final QEI costume looks so familiar. I swear it’s a recycled design from those movies, down to the ladies in waiting and their wacky hair. 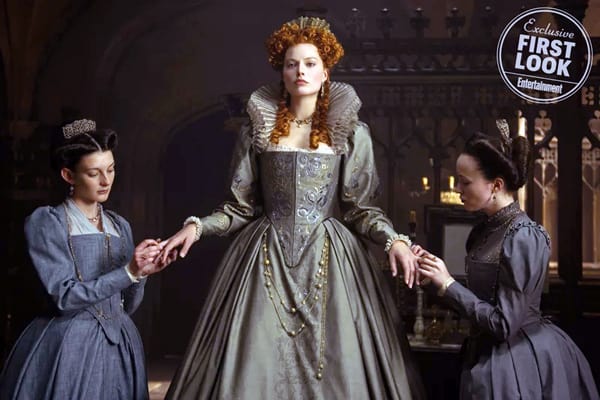 But what about our heroine, Mary Stuart herself? Sure, she’s a redhead (Sarah was very impressed by that minor achievement), but otherwise, her hair is crap. Oh, and legitimate contemporary sources and accounts that I’ve found point to Mary’s hair being “chestnut” not exactly orange-toned, FWIW. 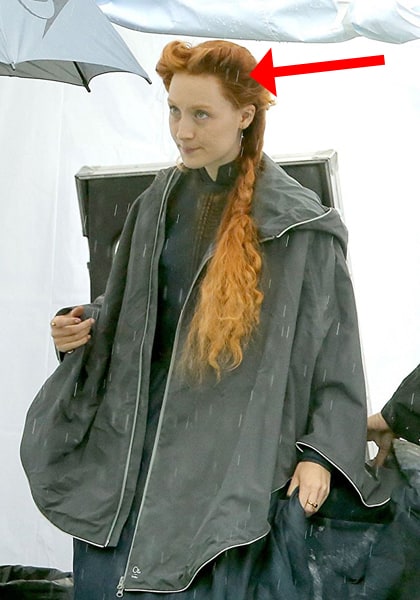 Saoirse Ronan as Mary, behind the scenes, and with only two regulation hairpins. 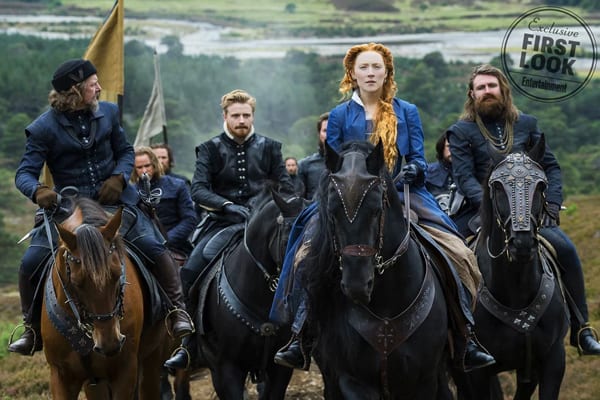 Riding through Scotland, hair flowing free, as you do. We can quibble about riding astride vs. side-saddle, but I have more niggling nits to pick.

The hair is hardly the only failure we need to talk about. We need a sitdown about the 16th-century English (and French and Netherlandish) concept of a “partlet” here, because Ms. Byrne or her team or director Josie Rourke or someone somewhere in the decision-making chain when it came to these designs is really unclear on the concept here. Or they are just fucking with me. IDK. 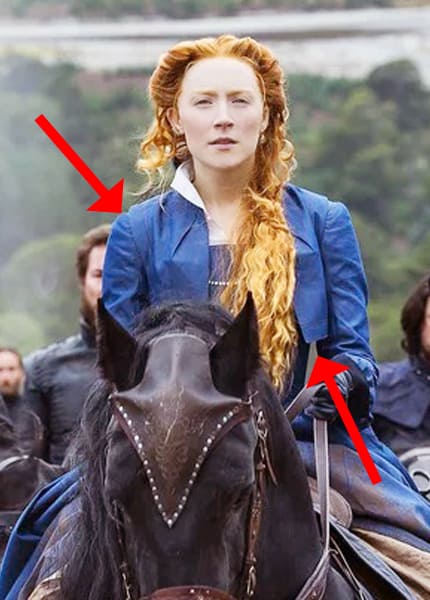 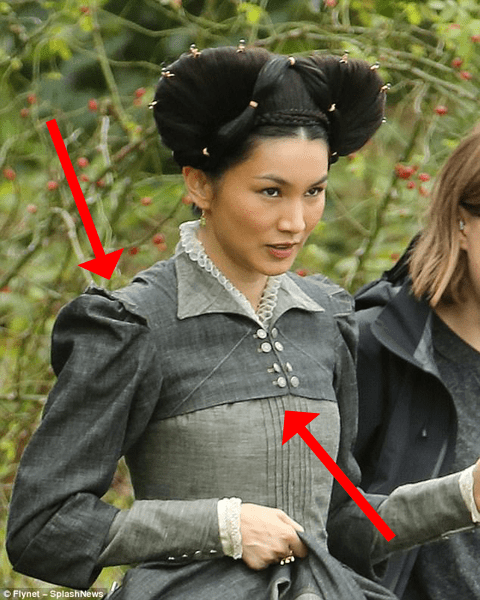 The phenomenon is more clearly illustrated in Chan’s costume (and yes, I’m ignoring her hair, as it’s the least offensive pictured here). 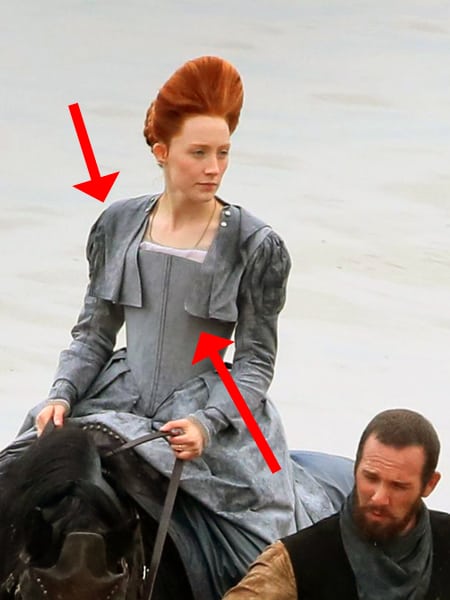 And again on Ronan. WT-ever-loving-FUCK?!?

This is what those movie costume “partlet” things remind me of: 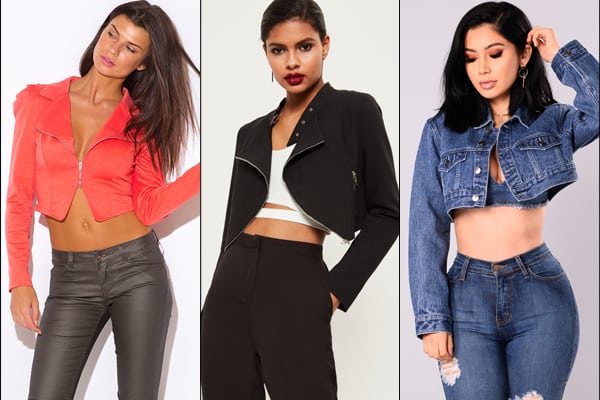 And that is not what a 16th-century woman would ever wear, nope nope nope.

In Renaissance terms, a partlet was a sleeveless cloth garment that filled in gown’s deep neckline. It was worn around the neck and shoulders, either over the bodice of a dress or tucked into the bodice. Partlets worn over a gown tended to be black velvet or wool, while partlets worn under were usually fine white linen. 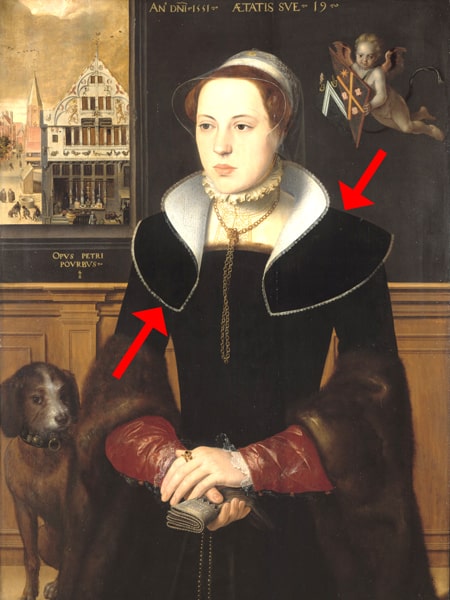 1523 , Netherlands, unknown lady, by Pieter Pourbus. Over partlet in black with white lining and gold trim all around. 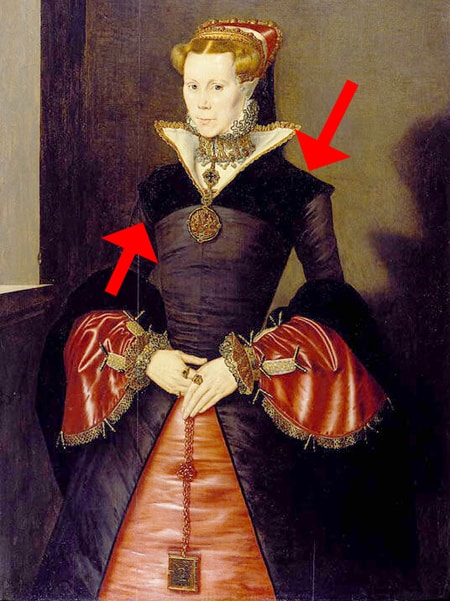 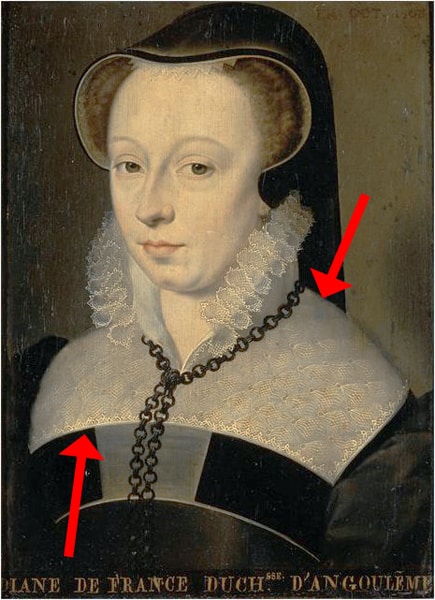 So yeah, whatever they’re wearing in the movie, it ain’t right. Maybe they have a cross-promotion deal with H&M or Forever 21 for cropped jackets? (GROSS, GAG, SHOOT ME IN THE FACE PLS.)

Oh and about that hair… 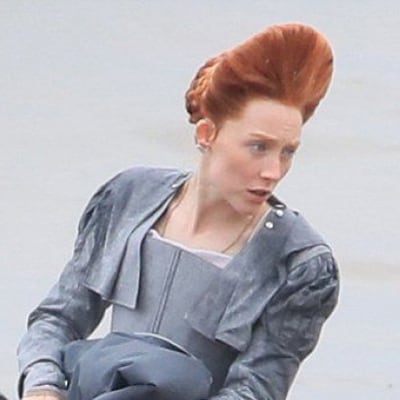 Sure, it could be historically accurate. If the film is set in the 1590s. By which point Mary Queen of Scots was totally dead, so there’s that. Also, the women’s clothes looked very different. Let’s compare: 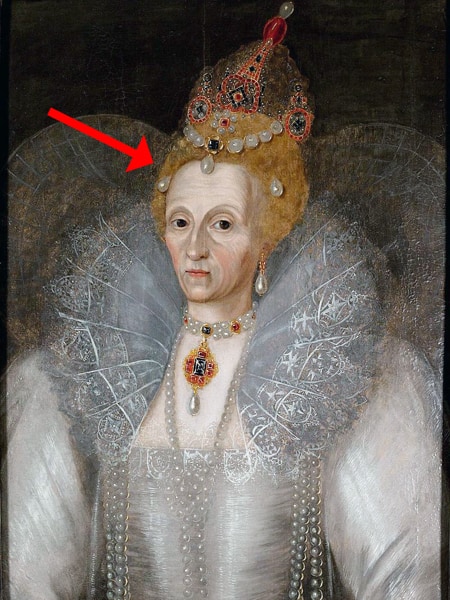 This is Queen Elizabeth I painted by Marcus Gheeraerts the Younger in 1595. Yep, same hairstyle as the movie! But notice how much older she looks here. Because she’s 62. 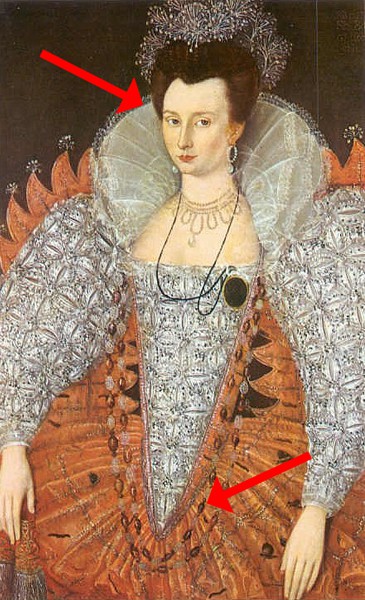 This 1595 painting of Mary Fitton, one of QEI’s maids of honor, shows that same hairstyle and the typical wheel farthingale gown it was worn with — which is not in evidence in this movie.

So top to bottom, I’m expecting terrible things from this flick. As if to add insult to injury, OF COURSE, there are metal grommets. OF COURSE there are. 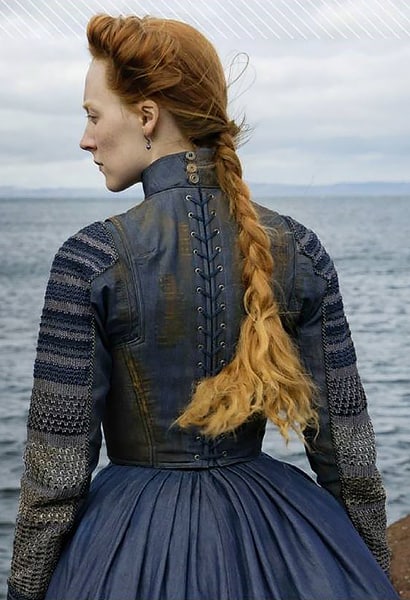 What most offends you about the upcoming Mary Queen of Scots movie?