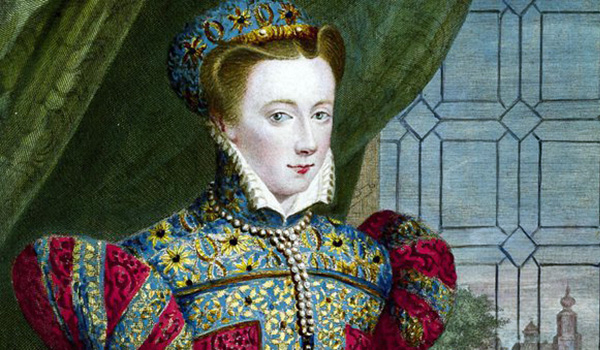 Yes, I have a thing about Mary, Queen of Scots. Known fact. I’ve also have a thing about 16th-century English and French fashion, which is what MQoS wore. So onscreen depictions of her that fuck it up irritate me, and The Serpent Queen (2022) was no exception. It’s right up there with the 2018 movie, with the very slight saving grace that she wasn’t the focus of the entire eight hours. But her wardrobe was pretty damn bad! If you squinted, sure, the shape was OK, other than her hair and lack of historically accurate headgear.

What made her look redonkulous was that she was dressed in a grab-bag of fabric scraps. Which is not a 16th-century aesthetic and just looks ugly IMO. For some historical background, most upper-class women’s gowns of this period were made from the same type of fabric, head to toe. Parts of this gown might be folded back or cut away to show other garments made of contrasting fabric, often highly decorated. In general, a high-status woman would wear an outfit made of two main colors or types of fabric: her main gown (black was a very common choice, though other dark colors were common) and a jewel-tone or bright contrasting color for a petticoat/forepart and sleeve accents. The collar of a woman’s smock or a separate partlet might also show at the neckline, and this was almost always in a shade of white, though it might be decorated with metallic or colored embroidery.

The overall effect looks like these women are wearing two colors on average, plus white and metallic trims. However, Mary Queen of Scots in The Serpent Queen is wearing too much. It’s eye-searing! I can’t stand it!

The first dress she’s show in only has two fabrics, but includes a garish plaid because, OH SHE’S SCOTTISH, SHE MUST BE SCOTTISH. 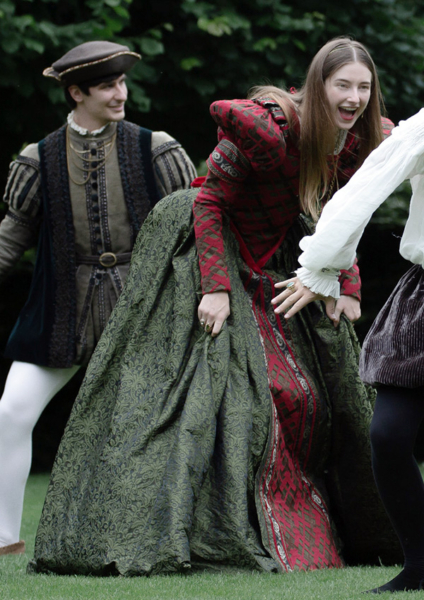 While there’s only two fabrics used, they aren’t used in a period fashion. Separate bodices weren’t a thing like this. And that plaid is 18th century at best. 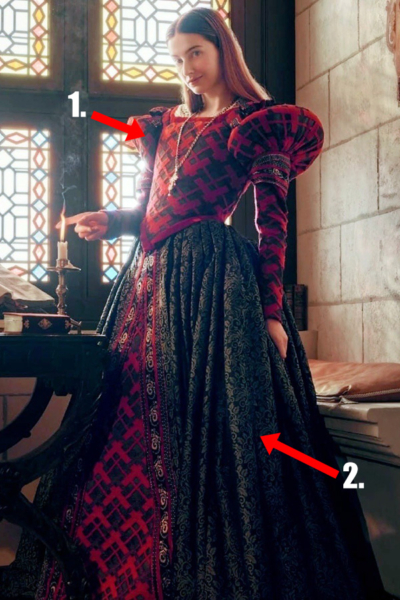 The next time we see her, she’s wearing all one color! Whew. Maybe this won’t be so bad… 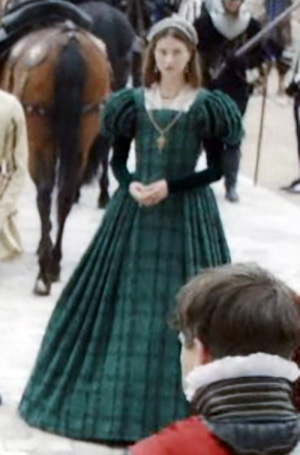 Oh wait. It’s a clunky PLAID wool (nobody’s heard of dress-weight wool?) with velvet sleeves and a contrast patterned fabric under the sleeve puffs. Anything under the puffs should be white or maybe a solid color. Also, WTF is on her head? It looks like a padded piece of hosiery turned into a headband. 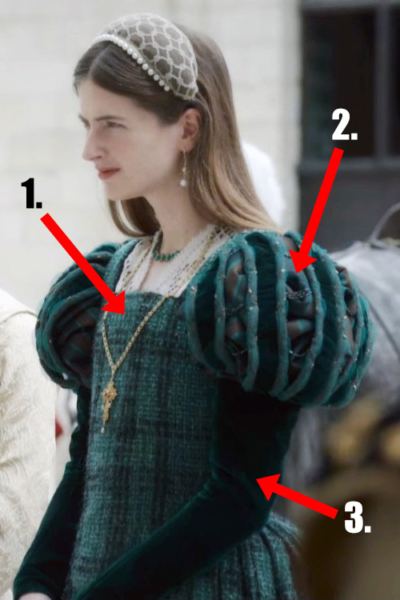 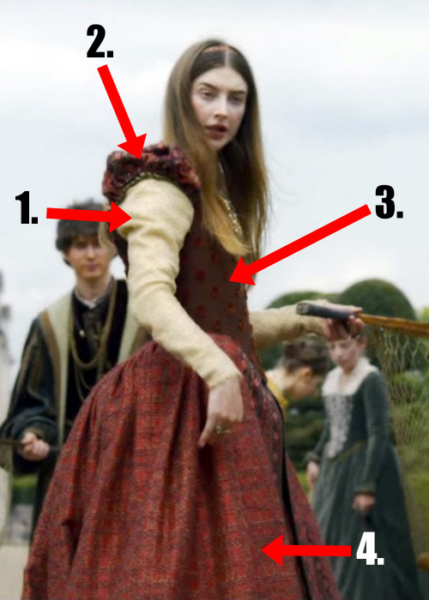 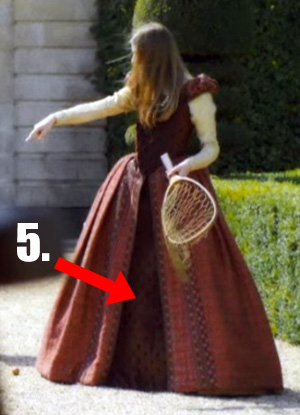 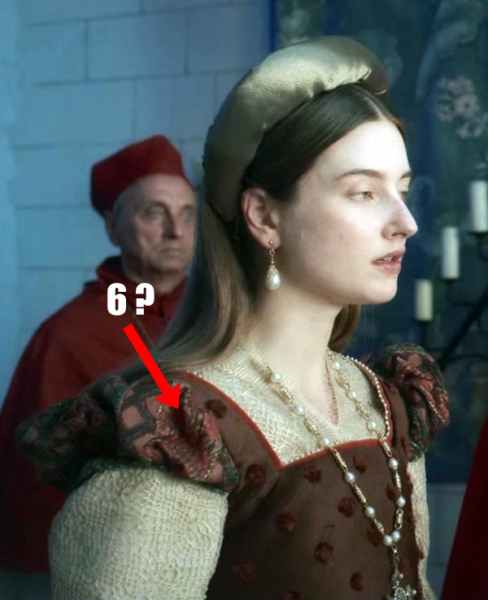 Here’s the gown she wears the most in the series, so it has the most fabric scraps! A green pattern for the bodice, accented with green velvet, a patterned green velvet for the sleeve puffs, burgundy pattern on the sleeves, solid green petticoat, and green brocade skirt. Wowzers. 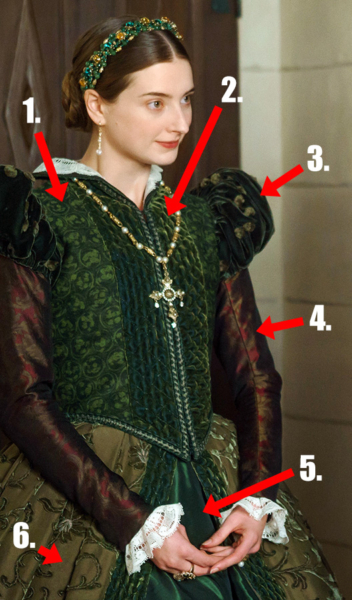 This one is slightly tame in comparison with a red and black pattern on the sleeve puff, a red diamond pattern for both the bodice and over skirt, some kind of silvery red pattern on the lower sleeve, and a pin-tucked red for the petticoat. 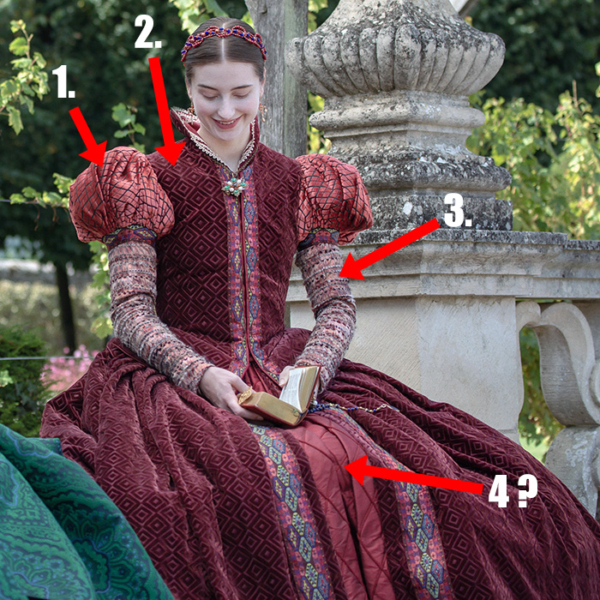 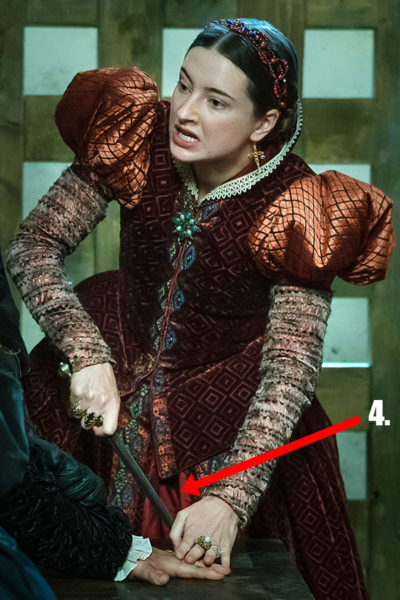 Her Christmasy red and green dress accomplishes a lot of fugly with fewer fabrics — reddish sleeve puffs, green and gold diamond pattern on the top of the bodice and on the lower sleeves, green damask on the bodice, and probably a solid green petticoat. 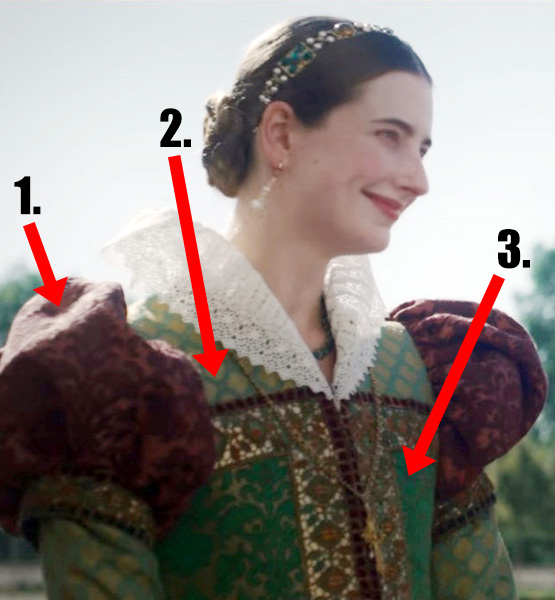 Her wedding/coronation gown is tame in comparison with just two red and gold prints! 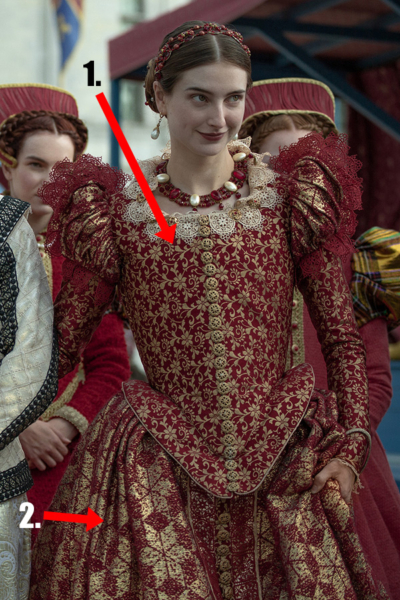 That green/burgundy gown she wears the most, she also wears at the king’s funeral with a burgundy partlet. 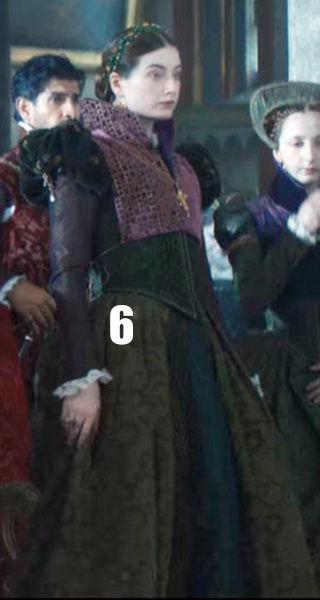 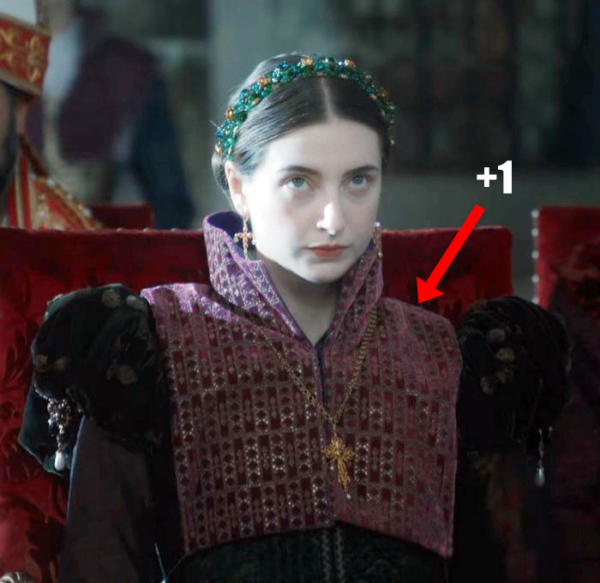 Her final gown is a sparkly mess of dark greenish/red print on the sleeve puffs, dark sparkle on the bodice and lower sleeves, a slightly different dark sparkle stuff on the skirt, and red petticoat. 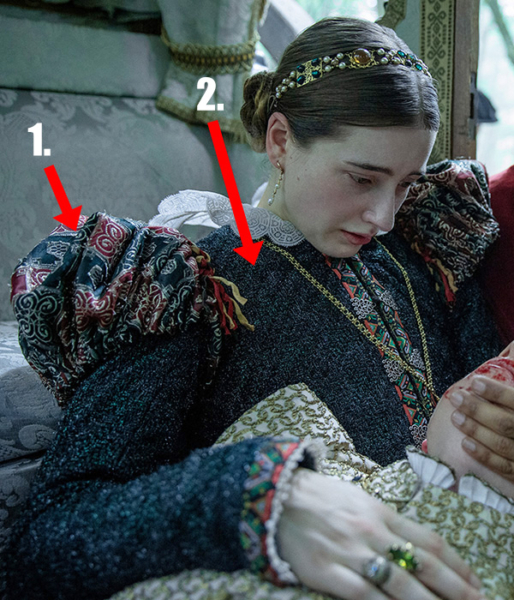 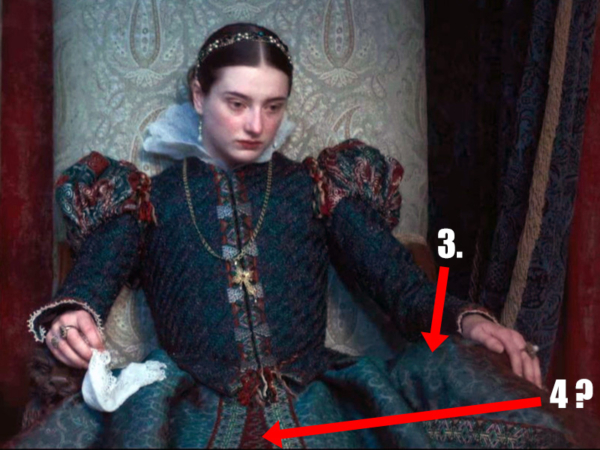 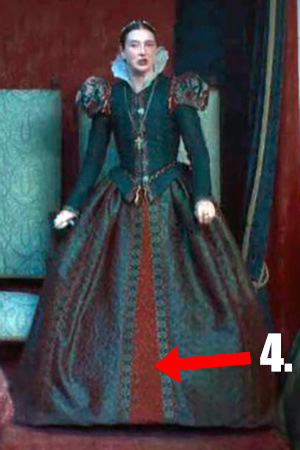 Are you inspired to use your fabric scraps now?