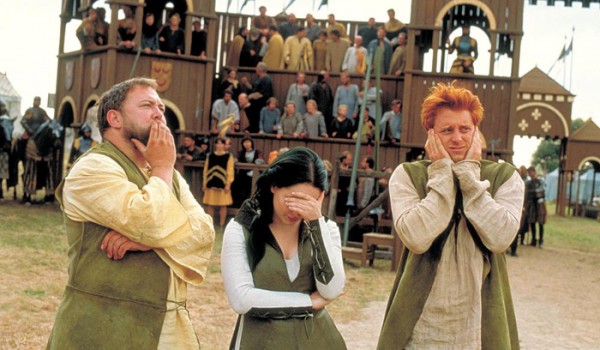 A long time ago, on an Internet far away, I was writing a feature about a really awesome website called Geoffrey Chaucer Hath a Blogge. Through a series of emails, I’d been interviewing the site’s author — Chaucer, as he maintained himself to be. My ever-dubious editor insisted we needed a photo of this guy for the story. Well, Chaucer told me he didn’t have any ‘portraits,’ but there was something which captured his image rather closely, and he pointed me to this:

I was crushed. The amazing, smart, and hilarious writer who I’d been conversing with and had championed to my bosses for this piece — Chaucer was pimpin’ himself as that dude in this shitty movie? UGH.

TL;DR, I didn’t run this article, and it doesn’t matter, because eventually that website I wrote for (the name rhymes with “Achoo!”) killed off those kinds of quirky features. So I’m writing here, ‘natch. And Chaucer’s Blogge continues, with the only reference to A Knight’s Tale being the soundtrack on Chaucer’s iPod. Which is fine, I guess, since I totally dig those songs too even if I highly disapprove of them in a movie purportedly set in the 14th century.

If A Knight’s Tale (2001) was a good ol’ comedy a la Monty Python or Mel Brooks (or Galavant even), yeah, I’d get it. The modern music and dumb costumes might work. But as an adventure-romance-buddy-movie, the anachronisms just add to the feeling that no-one has a clue what this movie is supposed to be. It makes for one hot mess that is neither funny nor fun to look at.

Don’t believe me? Here are five examples of why A Knight’s Tale sucks…

So, I take it the costuming isn’t supposed to be a big deal? The clothes should fade into the background and let the stellar acting and brilliant wit shine forth? Still waiting… 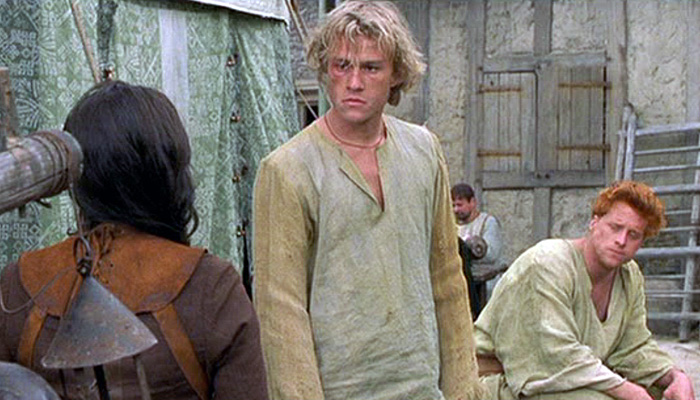 Are you mocking my only shirt? 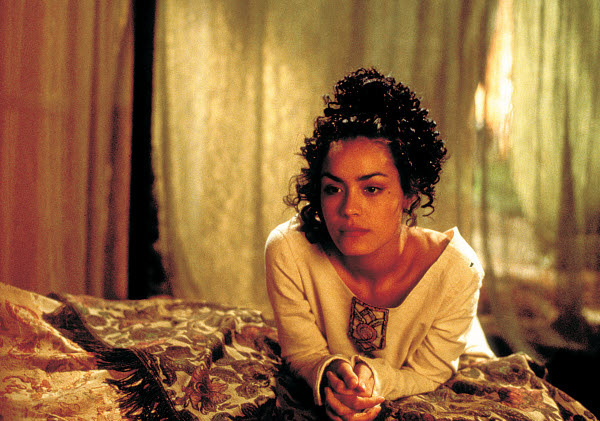 Chillaxing, listening to the Dead, smokin’ out. 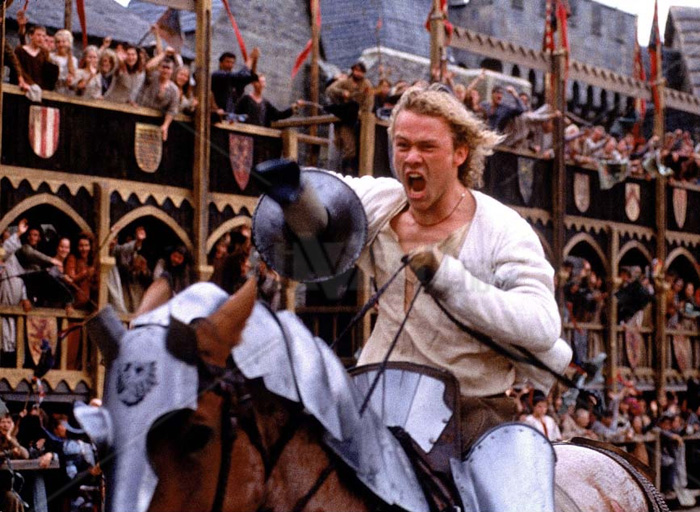 Because jousting without armor is always a good idea. 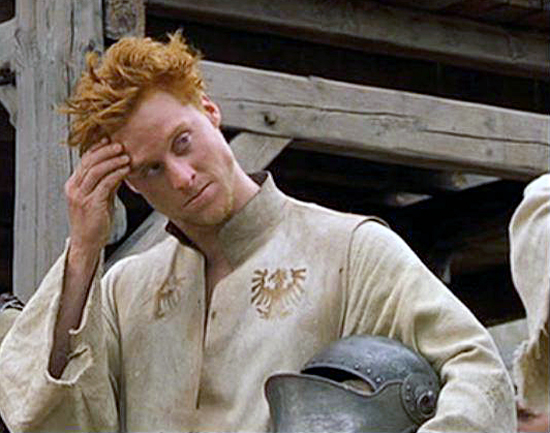 This is supposed to be my fancy outfit? I don’t see it either. 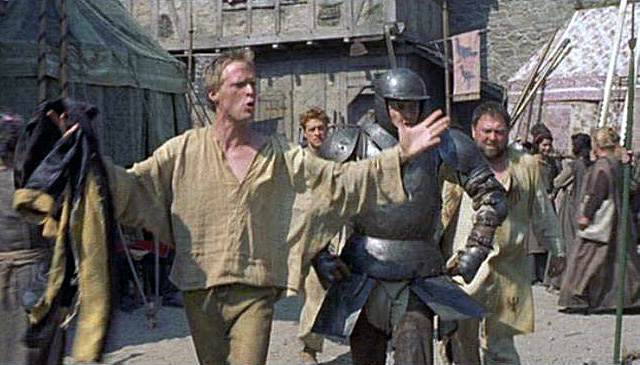 I feel compelled to point out how totally wrong this tunic is constructed for the period – the raglan sleeves & wide body, the short length. Also, Chaucer’s wearing khakis, & you can see the knight’s jeans under the chaps. Puh-leeze.

Tunics, fine, you’re lazy. But WTFrock are these dresses supposed to be? They’re not medieval, they’re not sexy modern clothes. They’re just weird. Or meh. 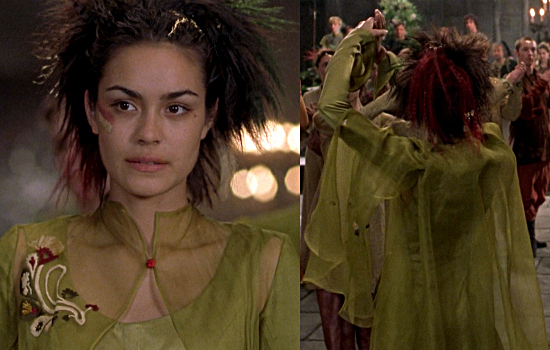 Is the face-painting too much? 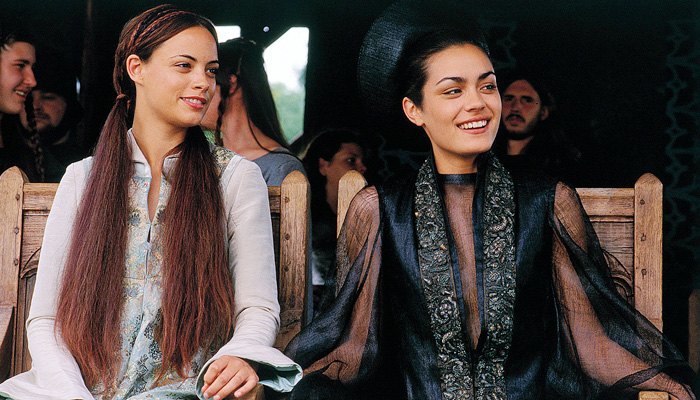 I SWEAR THEY SAID THIS MOVIE WAS SET IN 14TH-CENTURY ENGLAND.

The bodice doesn’t even fit, FFS. 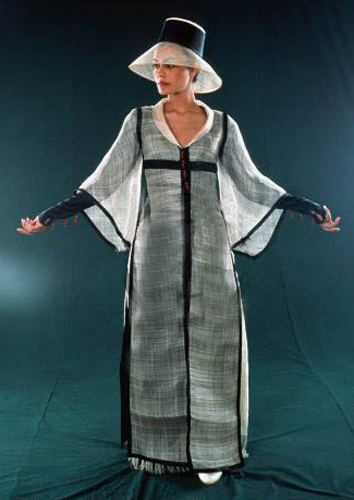 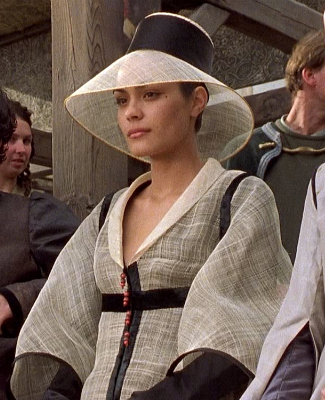 If the soundtrack was late ’90s techno, I might understand this hair. There’s a raver urban tribal thing going on among the cast. So why the classic rock? 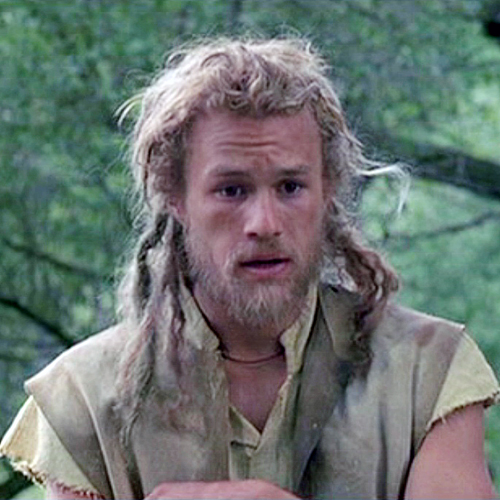 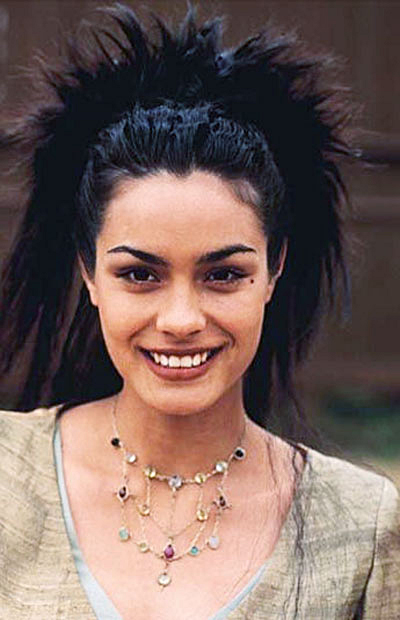 Was this really necessary? 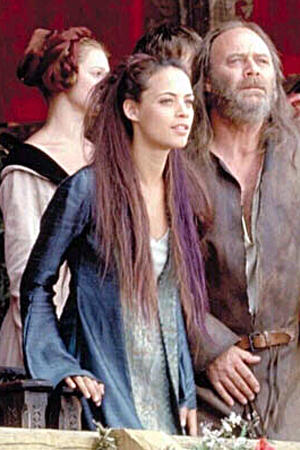 Is that purple hair chalk? Was that a thing back in 2001? 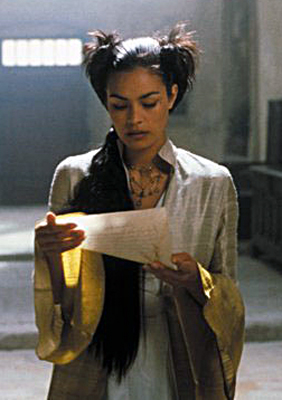 From unfortunate bigginses to 1950s saucer hats, nothing these people wear on their heads makes sense. WHAT IS THE POINT OF THIS MOVIE?!??!? 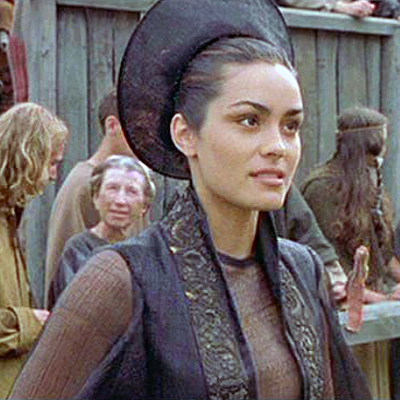 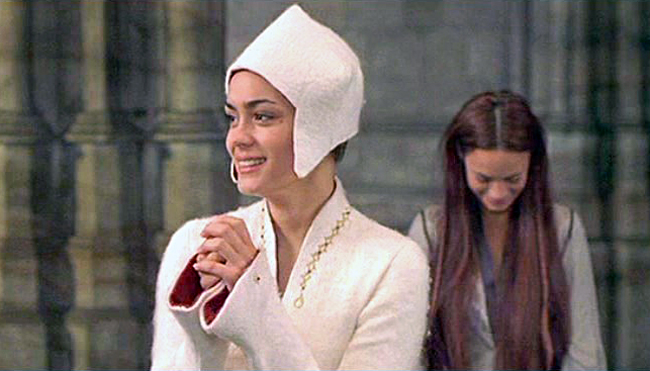 Maybe they’re trying for a 16th-c. structured coif here. But as we’ve discussed, you can’t wear one like this without it becoming an unfortunate biggins. Even the chick in the back knows that, duh. 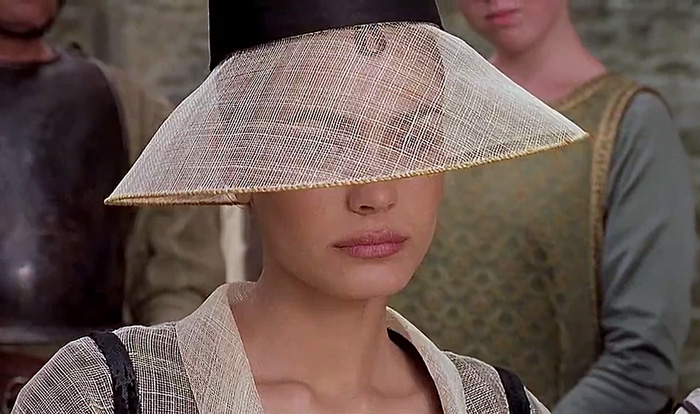 I can’t get over this white outfit & hat. The funny thing is, underneath the WTF brim, there’s a tiny black loop that could be part of a 14th-c. women’s headdress. But hey, one loop does not a historically accurate headdress make.

From Queen’s “We Will Rock You” before a big joust to David Bowie’s “Golden Years” during a formal dance ball, the soundtrack is all about the classic 1970s rock. Which I love as much as the next chick, but UGH it doesn’t work here. I’m sure the director thought they were being really clever with this shit. And again, if it were a Mel Brooks type movie, maybe it could have worked. But this movie cannot commit to being a balls-out comedy — it flops back and forth, trying to take itself seriously, trying to be a romance, trying to be a rousing adventure, hell, trying to be a road picture. So no. Just no. Quit fucking around with otherwise good music. You’re not good enough for it. 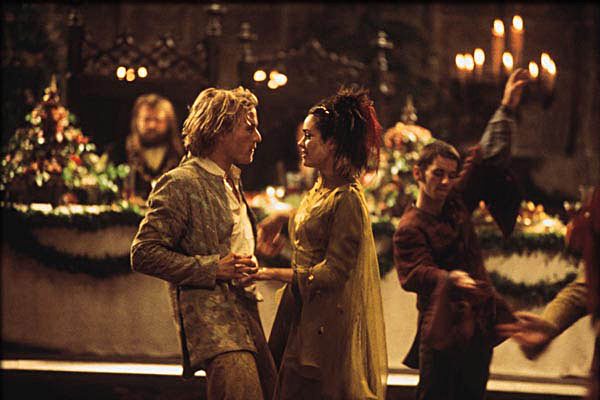 If you agree on why A Knight’s Tale sucks, vote for it in Your Daily Snark! And share what was the worst part of A Knight’s Tale for you! Or gasp did you enjoy the anachronisms? Don’t be shy — you can tell us!