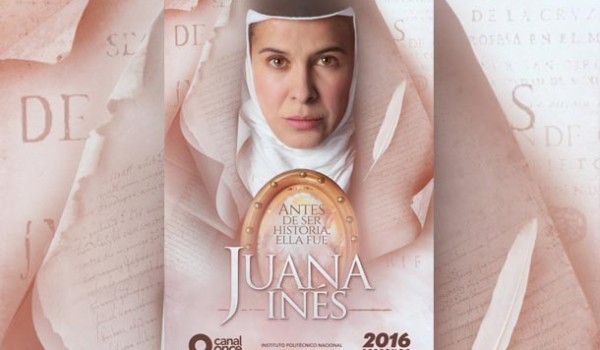 I can’t recall a film or TV series that has such extremes between the quality of the costuming and the quality of the acting and writing. I am seriously torn. On the one hand, the costumes in Juana Inés (2016) are probably some of the most egregious examples of bad film costuming I’ve laid eyes on in years. On the other hand, this series is utterly captivating and well-written and well-acted. So, including it in Snark Week sort of feels wrong, but then again, if I didn’t include it, you all would be missing out on some spectacularly bad costuming.

The series deals with Sor Juana Inés de la Cruz, the self-taught intellectual titan of 17th-century New Spain (modern-day Mexico), who also apparently had quite the love affair with not one, but two Royal Vicereines. Forced into a convent in order to “save her soul” (the usual line of patriarchal bullshit that smart, uppity women have been subjected to since the dawn of time), young Juana Inés (played by Arantza Ruiz) still has the favor of Vicereine #1 when she takes the veil.

Their relationship is a little confusingly portrayed, since Vicereine #1 comes off as a creepy older woman who is probably mentally ill, trying to seduce the young Juana. Their affair is less convincingly romantic and more like the sort of sexual harassment that would make it a candidate for the #MeToo movement. 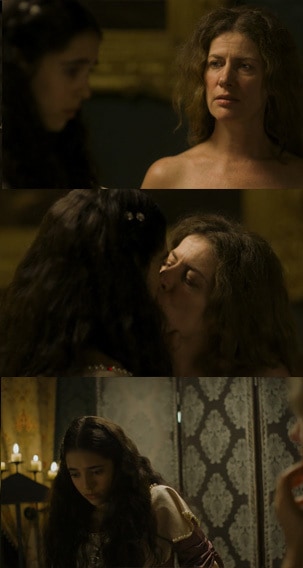 At this point in the show, I was wondering whether or not the plot was going to take the “she was coerced into a sexual relationship with the Vicereine out of fear of losing her position at court” angle, which would have been a bold move, since everything I’ve read about her earliest relationship with the first Vicereine seems to indicate that it was pretty consensual and probably not physical.

Unfortunately, the show never answers the question it raises about whether or not Juana was at all consenting; and from the constant look of fear and shame on the actress’ face whenever she was left alone in a room with the half-naked Vicereine (which the Vicereine manages to contrive a lot of excuses for in the first three episodes), I’m left wondering if the implication that she was coerced was exactly the intention. Either way, it made me squirm a lot. 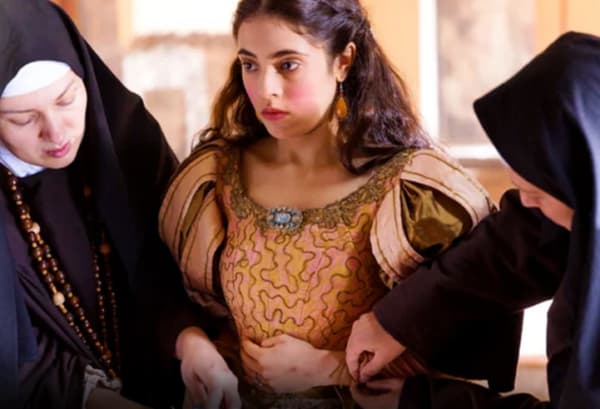 Did she go take the veil to escape a weird situation with her patroness? 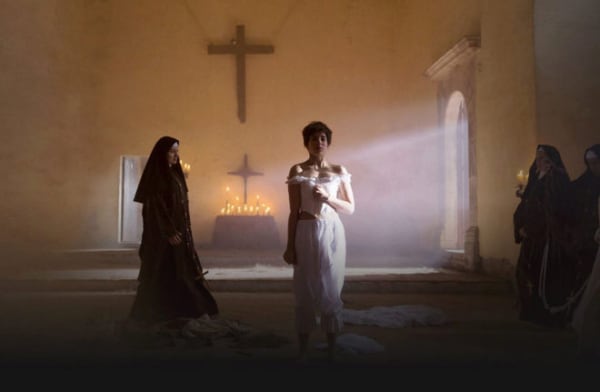 Eventually, Juana realizes that taking religious orders would put a necessary amount of distance between her and the creepy Vicereine, unless I’m missing something in the translation (again, I’m really going off body language here, so it doesn’t read like she’s at all conflicted about her feelings, just that she wants to get the fuck away from her patroness). She decides to stop fighting the Disney Villain and Confessor to the Viceregal family, Padre Núñez de Miranda, on the issue of taking the veil and manages to secure a compromise with him in order to join the Hieronymite order which is more liberal than the Discalced Carmelites she was originally going to be forced into. She’s able to continue to write and compose flattering poetry for the Vicereine and no longer has to worry about being caught in the same room alone with Virreina Creepy.

Everyone is happy with the arrangement, except for the Vicereine, who ultimately dies of grief when she and her husband are called back to Madrid, forcing a permanent separation from her beloved Juana. 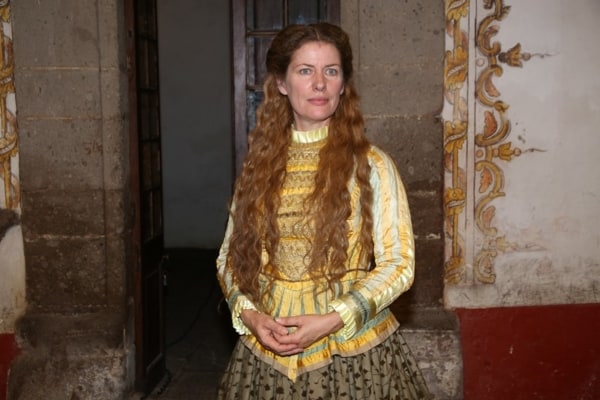 What’s more tragic? Being forcibly separated from the underage girl you’re obsessed with, or that dress?

The show then moves into the second half, with an adult Juana (played by Arcelia Ramírez), and the story goes in a completely different direction when Vicereine #2 comes on the scene. There’s no ambiguity about Juana’s feelings now. Vicereine #2 is young and pretty, and both she and Juana fall for one another hard. Of course, their love is not meant to be, because it’s 17th-century New Spain and one woman is married to the Church and the other is married to a Spanish bureaucrat.

There’s also a disapproving Mother Superior who knows what’s going on between the two and is constantly trying to put a stop to it, lest their affair be exposed and ruin the convent’s standing at court, while at the same time having to tolerate it because of the the patronage it brings from the Vicerregal family. 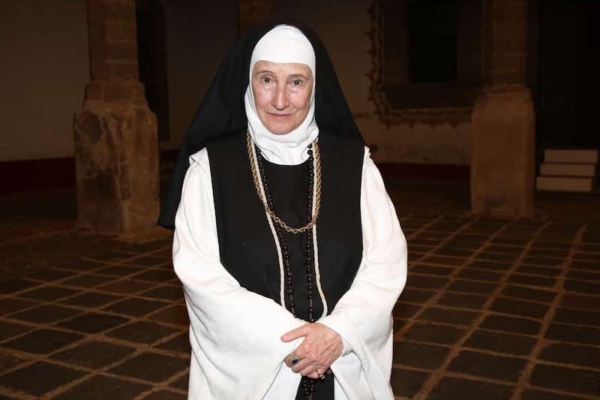 A lot of plot happens that I am skipping over because I really want to get to the costumes, so let me sum up: Vicereine #2 gets sent back to Spain after a few years, but takes Juana’s writings with her, ensuring that they are preserved from being destroyed by the Church. A third Viceroy is sent to New Spain and Vicereine #3 turns out to be an utter bitch. Then Juana dies a gruesome death from the plague and nobody lives happily ever after. 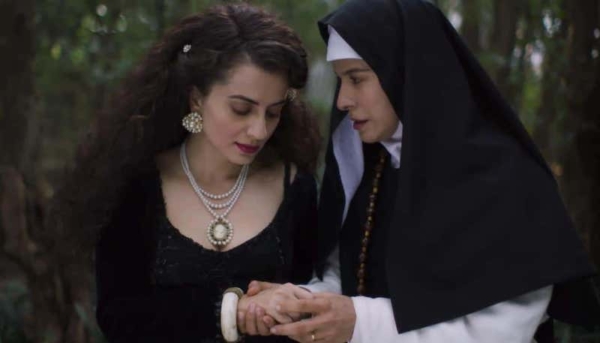 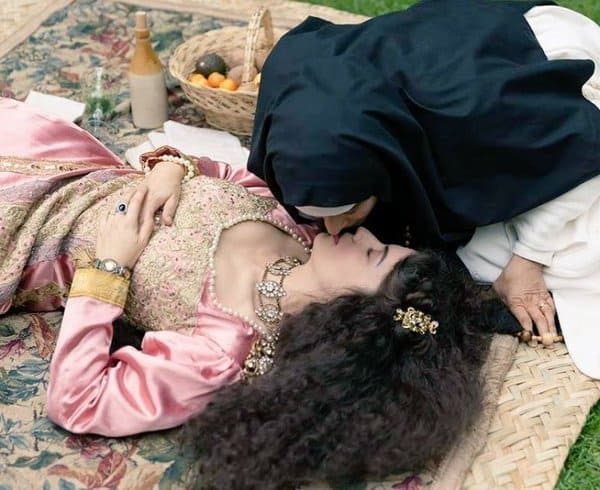 I was actually pleasantly surprised that the show actually depicted some tasteful PG-13 love scenes.

So, anyway, enough about the plot. Let’s look at how awful the costumes are. There’s lots of places to start, but I think Virreina Creepy’s Spanish court gown pretty much overshadows all the others. I’ll be honest, this is a tricky look to pull off in real life, but it’s not impossible if you know anything about, oh, I dunno, researching historical undergarments.

I had to make this gif so you could all see this dress in action. 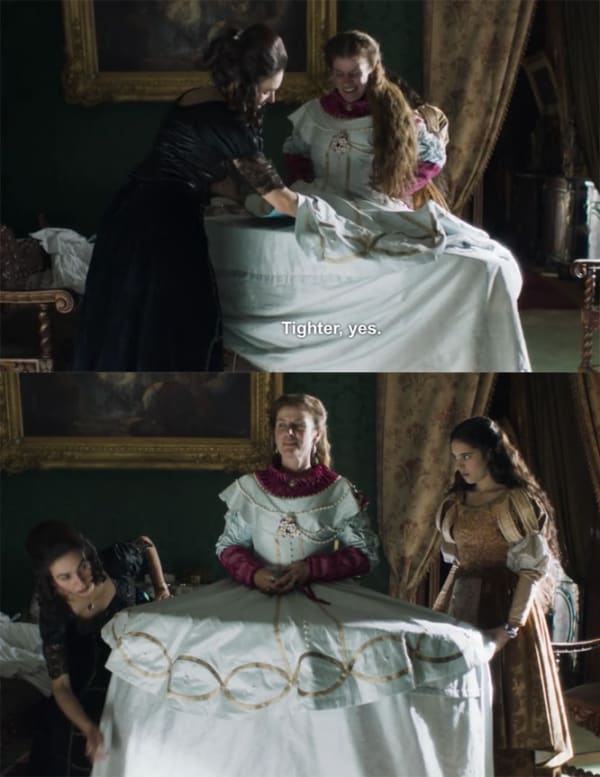 Tighten what now? Also, I’m pretty sure this dress is made from bedsheets.

So, what exactly is this gown supposed to look like? I think it’s going for this: 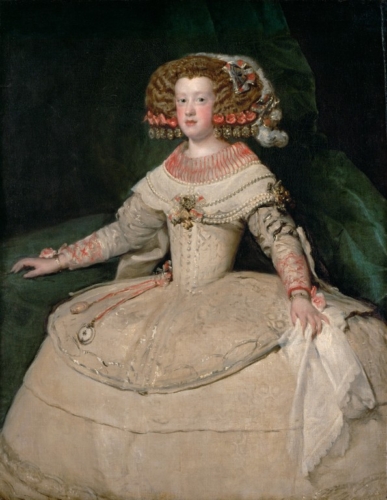 Like I said, it’s a tricky style to recreate, but it’s not impossible. For comparison’s sake, here’s my friend Joel, in his recreation of a mid-17th-century Spanish infanta gown, complete with the massive hair (because it’s all about the hair, though, isn’t it?):

One of the better gowns in the series was the dress Juana wears during her examination before she’s allowed to become the tutor to the viceregal children. It’s based on the portrait of Juana done by the 20th-century artist Jorge Sánchez Hernández, who did a series of paintings featuring Juana Inés throughout her life. However, I am contractually obligated to point out that this is not a period portrait, and the recreated dress fits badly. Like almost every dress in the series, it is way too long in the waist and has virtually no boning or stiffening built into it. The painted floral design is nice, though. 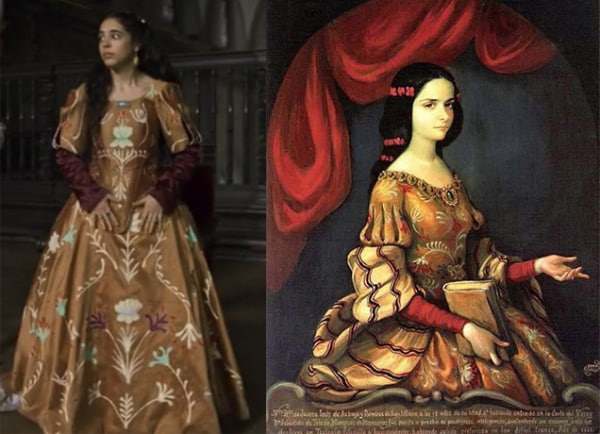 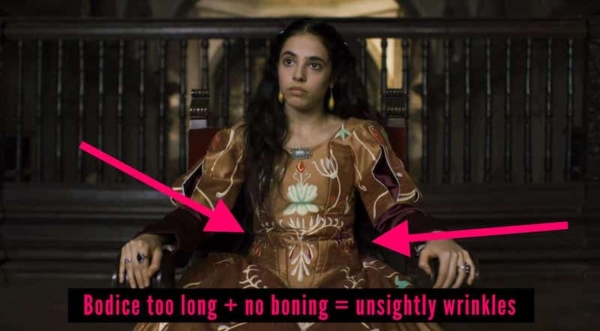 Apparently, this is complicated. 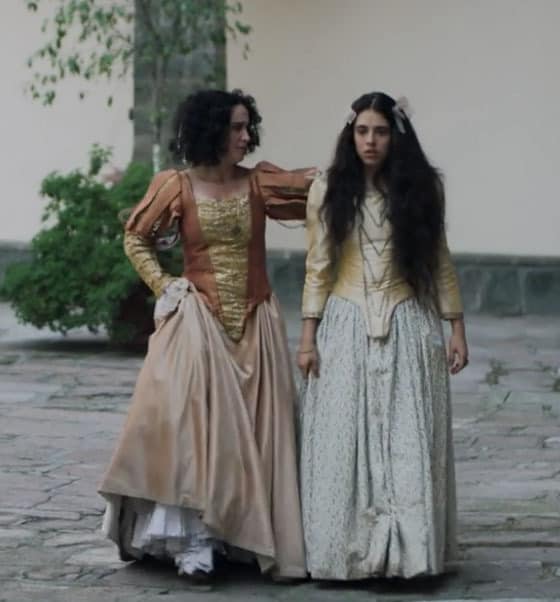 The long-waisted bodices are definitely a thing with this show. 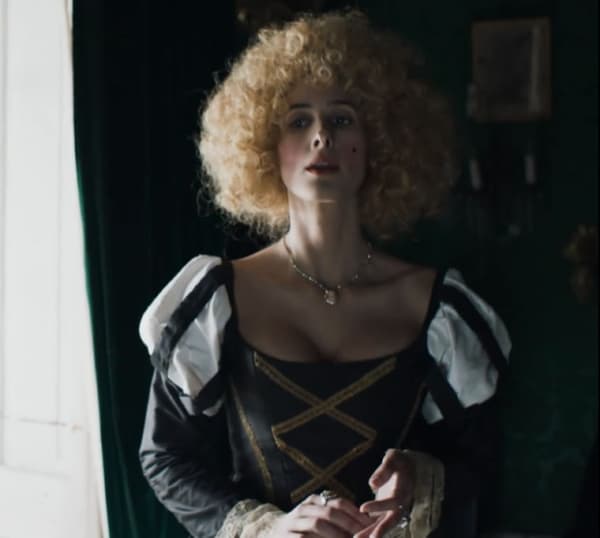 The Viceroy’s mistress and the previous “tutor” to the viceregal children. She has a series of trashy dresses for the two episodes she’s in, but this one was the least awful. That wig, tho. 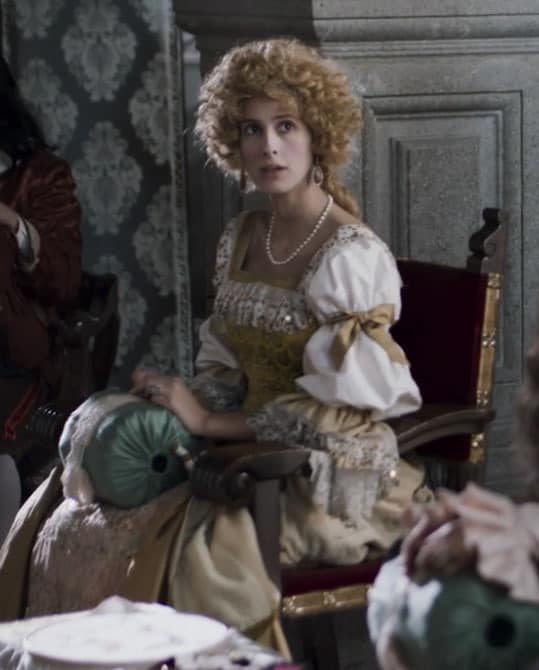 Just … why? Why would you do this to me? 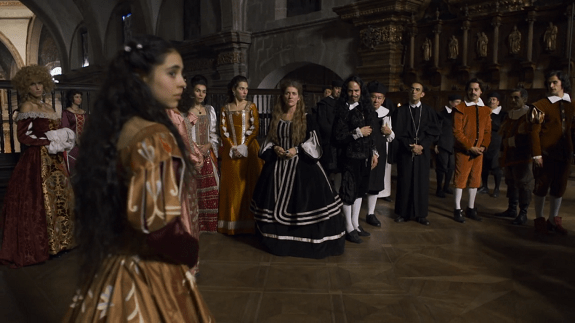 Even when the costumes are obviously referencing portraits, they veer off into What The Frock territory.

I’d love to be able to tell you who was responsible for the hot mess, but IMDB doesn’t list costuming credits. Though it’s pretty obvious that the budget was almost entirely allocated to shooting on location at the many fabulous extant palaces and churches in Mexico City. The scenery is fabulous, the acting is good, the writing is compelling … If you can ignore the costuming, definitely watch it. 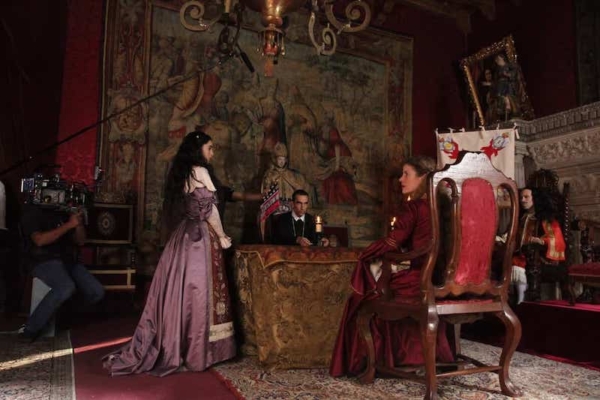 Have you tried to watch Juana Inés on Netflix?