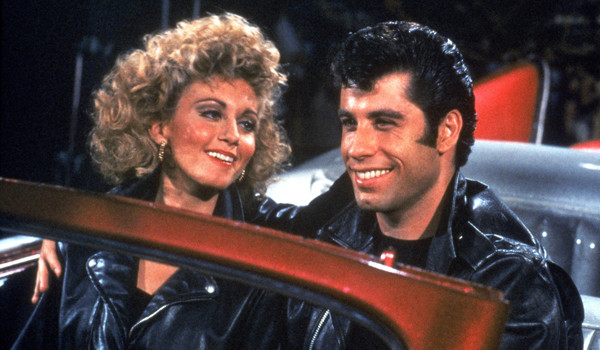 If you were a kid or pre-teen in the 1970s, you probably saw and loved Grease when it first came out in 1978. It was a bone-fide phenomenon. “You’re the One That I Want” was a pop hit on the radio, and the movie ranks as the highest grossing musical of the past 40 years. At summertime weddings I’ve been to, chicks my age start singing “Summer Lovin'” after a few glasses (bottles) of champagne. But I didn’t see this movie until last month, when I was bored and watched it on Netflix. Because I knew as a nine-year-old that I would hate it for exactly the same reasons I hated it now. OMG THE CHEESE.

Now, I can’t possibly do the story justice in snarking even during Snark Week, so I’ll just point you towards Tom & Lorenzo’s Musical Monday review of Grease. Meanwhile, I’ll just address the super mega cheeziod costumes and  hair. Because it’s unbelievable how cartoony, fake, and over-the-top bad this movie’s look is. It’s 1950s as seen through the 1970s, two crappy tastes that taste like complete shit together! 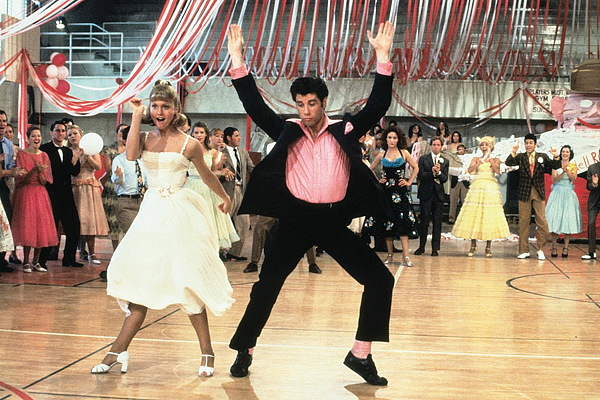 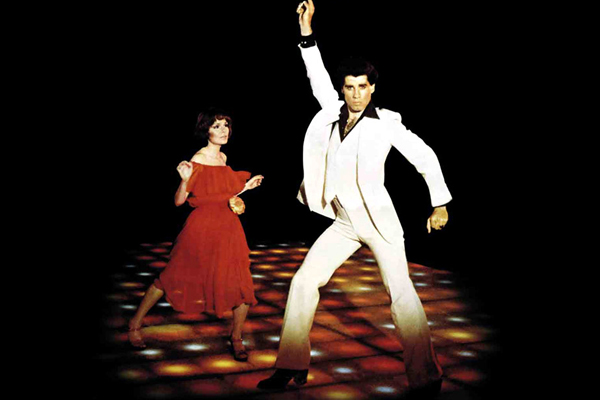 I blame Grease and the Happy Days Nostalgia Industrial Complex (which started in 1974) for turning the 1950s into one giant pink-and-turquoise, hot-roddin’, leather-jacketed mess of cliches forever in popular culture. Not that the ’50s are vitally worth subtle complexities, but compare to how Mad Men nailed the mid-century details of 1960 through 1970 for seven seasons without resorting to tired exaggerations. 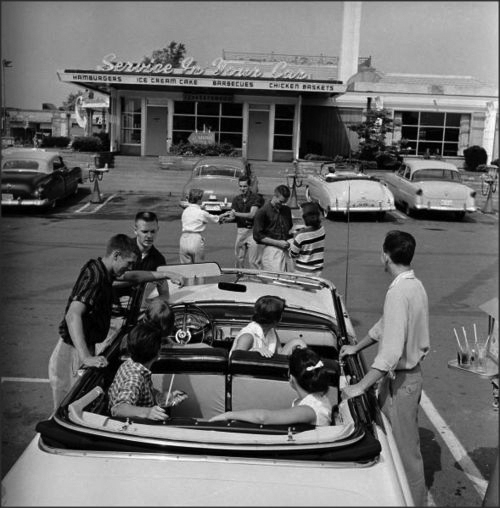 Actual 1950s patterns for young women – not getting that hot roddin’ vibe.

Grease didn’t try to rise above the stereotypes and instead made them worse — especially with all the 30-year-olds portraying high schoolers. I mean, c’mon, Beverley Hills 90210 got flack for the actors being older, but at least they were mostly late teens or early 20s. Stockard Channing as Rizzo was 34, so who cares if she got knocked up? 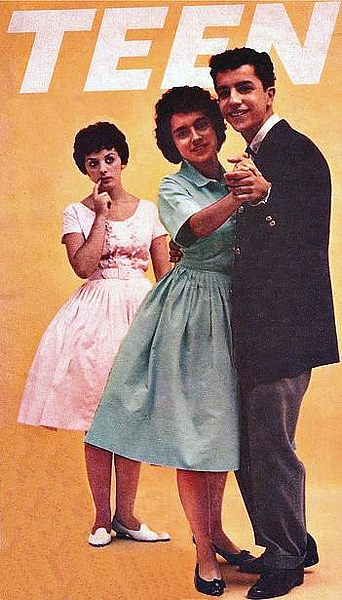 The silliest part, IMO, are the gangs, matched sets of aging greasers and over-the-hill Pink Ladies. These puffed-up musical misfits are all poseurs, wearing their logo jackets, just standing around, trying to look cool. The Sharks and Jets in West Side Story would wipe the floor with the T-Birds, and the West Side girls would bitch-slap the Pink Ladies while singing and dancing all the way back to Puerto Rico. 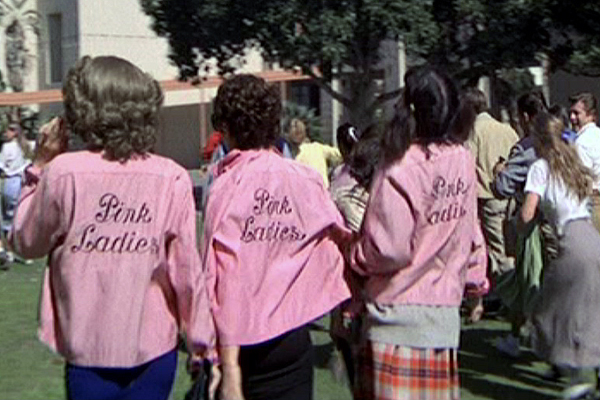 Girl gang? More like gang bang in the making. 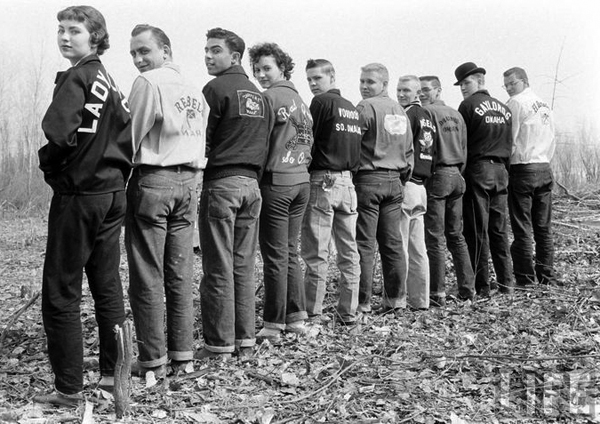 They may be younger, but these 1950s biker gang members were hardcore.

I guess the costumes aren’t as bad as they could be, compared to actual 1950s fashions. The look is dumb, but not horrific in every scene. What’s a real shit-show is the hair. From the grease-dripping pompadours of John Travolta and the T-Birds to the bombastically fake wigs on the Pink Ladies, the hair looks like somebody’s bad joke of a Halloween costume of the ’50s.

Yes, rocker boys slicked their hair back into a duck’s ass and up into pomps — Elvis Presley was most famous for this style. But if your hair was super shiny and looked like it’d drip a Deepwater Horizon size oil spill on your collar, then you’re doing it wrong. 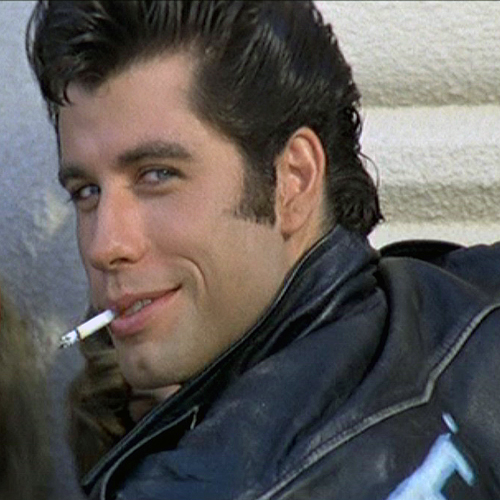 For Grease, they laid it on thick for Danny’s dippity ‘do. 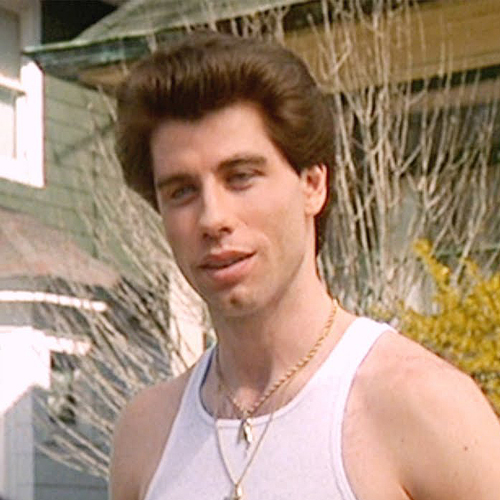 Same hair before the pomade in Saturday Night Fever (1977).

Teenage girls wore their hair in a variety of styles, none of which are realistically reflected in the Pink Ladies’ over-sized, face-eating wigs. Olivia Newton-John as Sandy gets a fairly accurate hairstyle at first, and a few background women get moderately non-stupid hair/wigs, but it’s the girl gang that’s off the hook. 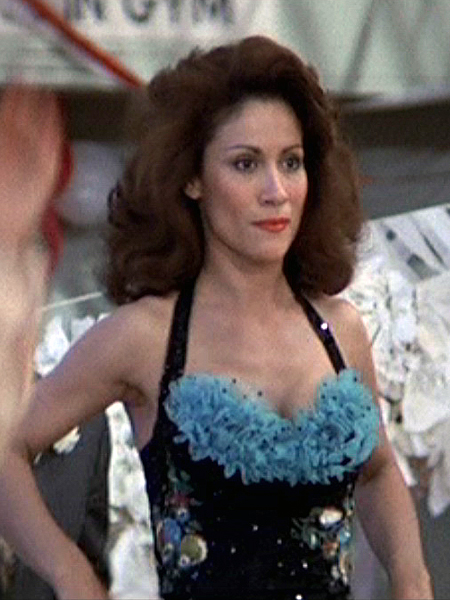 But first, “Cha-Cha” what’s up with the perm and pot scrubbers on your tits?

Marty has an enormously curled flip that’s so ’70s, it was all over the then-current network TV. Your mom and my grade-school teachers probably had this hairstyle. 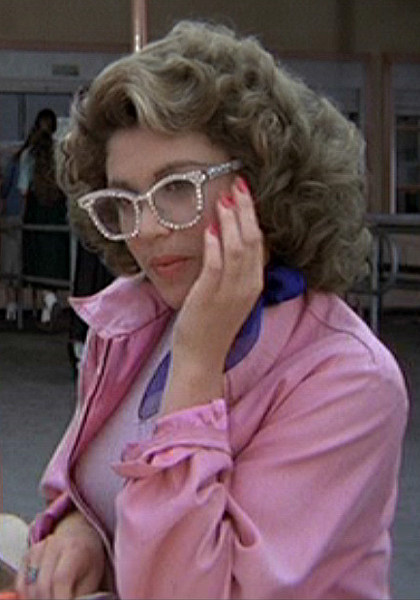 Didn’t Elton John wear these specs in the 1970s too? 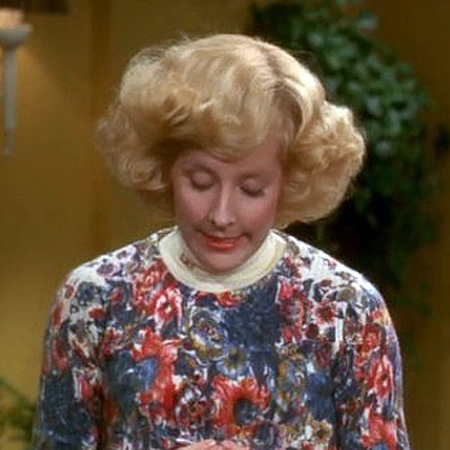 Jan wears frizzy pigtails in a freakish attempt to make her look younger — and is full of fail. 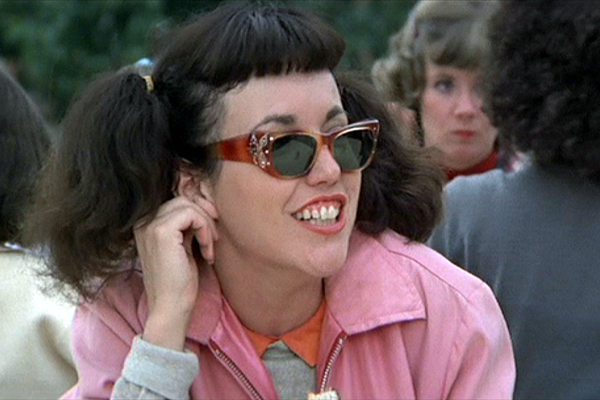 The actress apparently made a career out of frizzy hair — she played Magenta in the U.S. stage premiere of The Rocky Horror Picture Show. 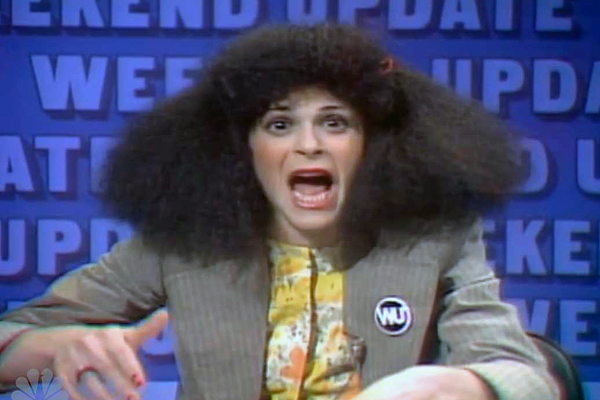 Gilda Radner wore it better in ’77.

But it’s Frenchy, the “beauty-school dropout,” who gets her own song-and-dance number and a zillion redonkulous wigs to emphasize how much of a loser she is when it comes to doing her own hair. 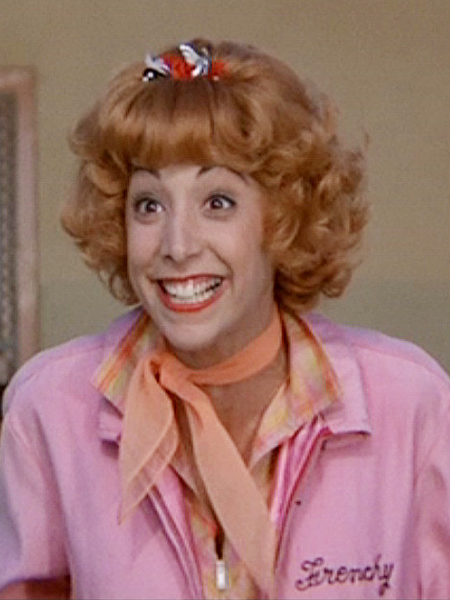 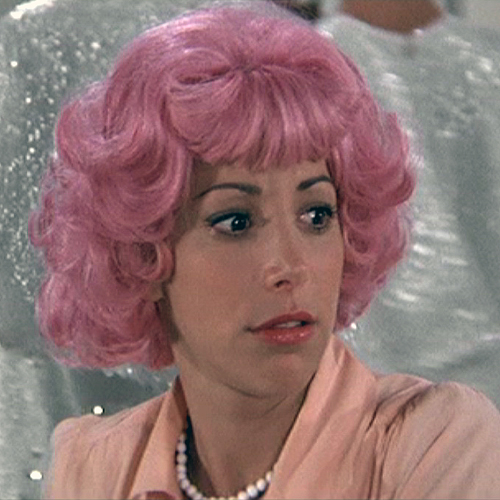 A case study in why you shouldn’t dye your own hair at home. 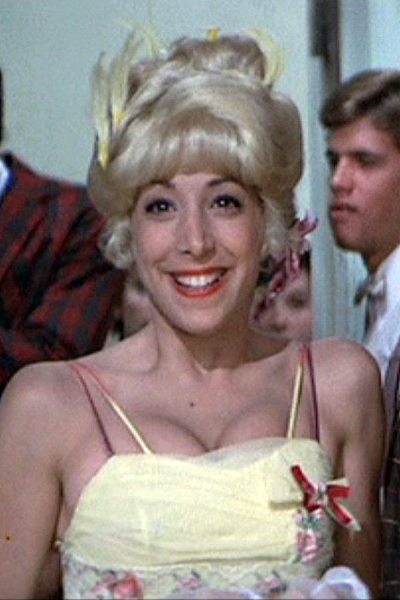 Queen of the Face-Eating Wigs at the Prom.

Only Rizzo isn’t wearing a completely crappy hairstyle, and her butch short cut is the most historically accurate, yet it merely serves to remind us how much older Stockard Channing is than her character. 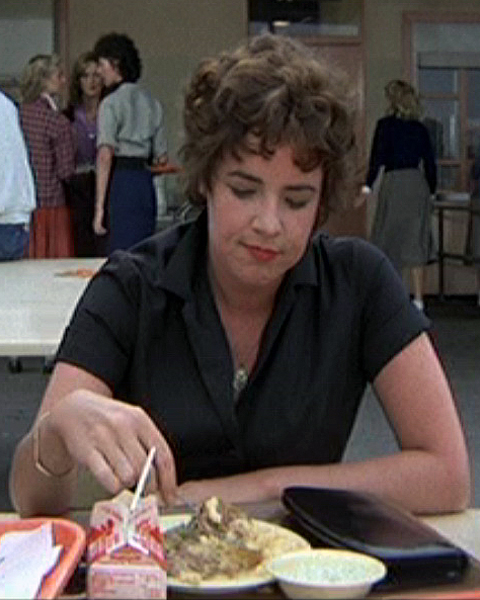 Too old for this shit.

Then, in the final episodes, the Pink Ladies makeover Sandy as a bad girl. Not only does she get black skin-tight latex pants and top, she also gets a huge curly disco mane of hair. The hell? How is this ’50s? The whole outfit looks like she’s in line for Studio 54, circa 1978, all she needs is a coke spoon and Andy Warhol on her arm. 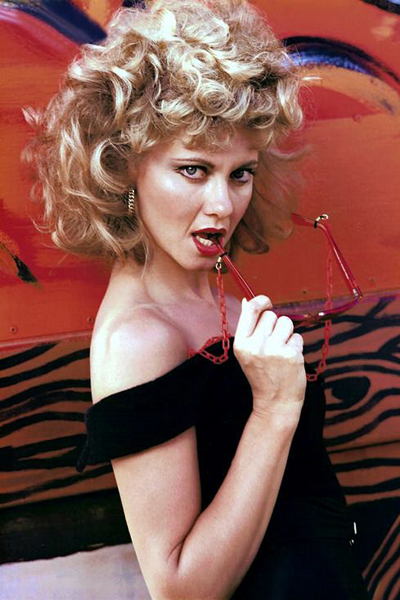 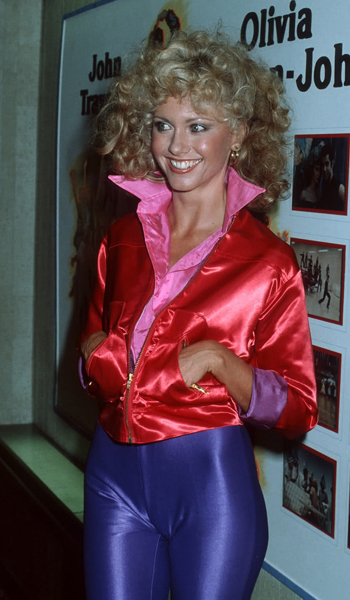 Olivia Newton-John at the Grease premiere party at Studio 54, June 13, 1978. Really didn’t have to wear anything different to “promote” the movie.

I usually love musicals, but damn, Grease almost ruins the genre for me. I’m used to the historical costume short cuts taken in musicals from the 1940s to 1960s (I’ll still snark them though). But the sheer weight of the horrible ’50s/’70s mashup sets my teeth on edge. Grease is too greasy for me! 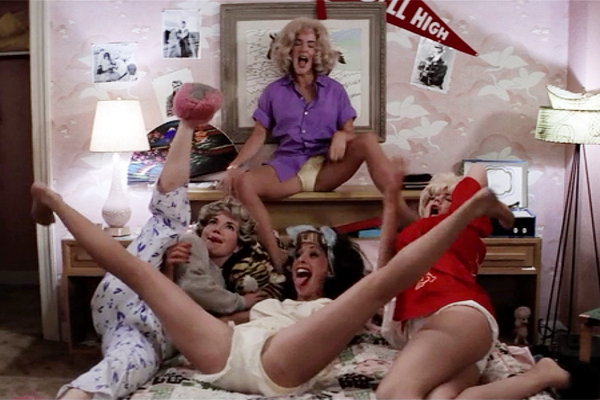 This kinda looks like the Frock Flicks Team at Costume College — at least we know we’re overgrown teenagers.

Are you hopelessly devoted to Grease? Or is watching this the worst thing you could do?