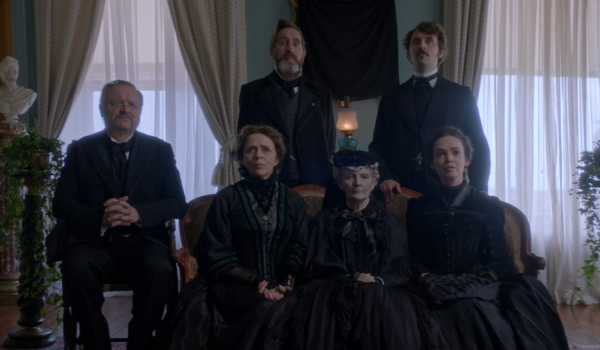 Acorn TV is one of the few streaming platforms that is willing to work with Frock Flicks by providing us advanced screenings, and Dead Still (2020-) came to us earlier last year before it premiered. Since I’m a well-known lover of the murder mystery genre, plus the added angle of Victorian death photography looked intriguing, I decided to give it a shot.

People, I tried, I really did.

I wanted so badly to like this show, and honestly, it wasn’t even about the costumes but, well, everything else. Most of the costumes were people wearing late “Victorian” mourning or menswear, with the exception of the main female character (but more on her specifically, in a bit). I have a minor quibble with the fact that the show is set in the 1880, but a lot of the non-mourning women’s fashions are more 1890s, but whatever. We can quibble about that shit all day, but in the end a 10 year difference between the costumes and the established year of the show is just splitting hairs. Did they get the look mostly right? Yeah, sure. 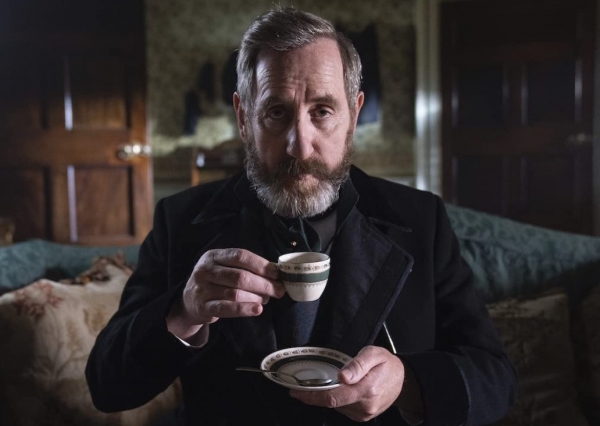 My face while watching this show.

What really bothered me was the fact that Dead Still had some pretty decent potential: Brock Blennerhassett is a photographer living in Dublin in the early days of photography (played by Michael Smiley, whose acting credits are lengthy but who will always be Tyres from Spaced to me), who takes photos of dead people for grieving families and winds up getting embroiled in an overarching murder plot. All of that sounds right up my proverbial alley, but it just did not deliver on really anything.

As I mentioned above, the thing that ultimately did me in was when I was 30 minutes through an episode, thinking the plot had already wrapped up some 10 minutes ago, and then realizing we had another 15 minutes of basically dead time to fill with some inane side story about the photographer’s idiot niece, Nancy, who comes from money but wants to be an actress (played by Eileen O’Higgins, who has a solid acting background in period dramas, but is apparently only notable for being Saoirse Ronan’s best friend, judging by the sheer number of articles about her that all have to mention it). 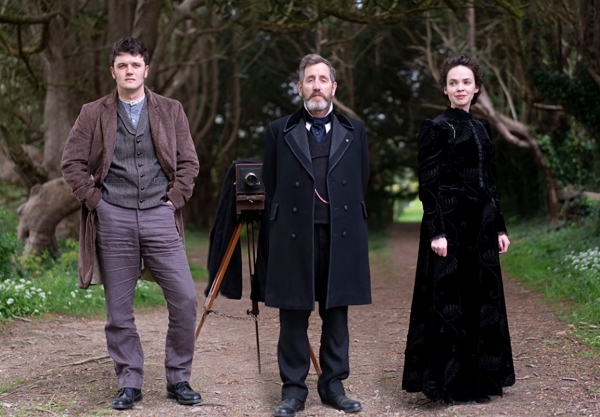 And it wasn’t just one episode … all of them were like that. The show seriously should have been run in a 30-minute format, because dedicating 45 minutes to these episodes just felt like an eternity. At one point I sort of spaced out and thought the episode I was watching had ended and then spent the next confused 10 minutes not comprehending why we hadn’t already moved on from whatever slapstick-y filler was thrown in there to kill time. God, the slapstick. If there’s any show that screams “slapstick,” it’s a show about a momento mori photographer and murder. 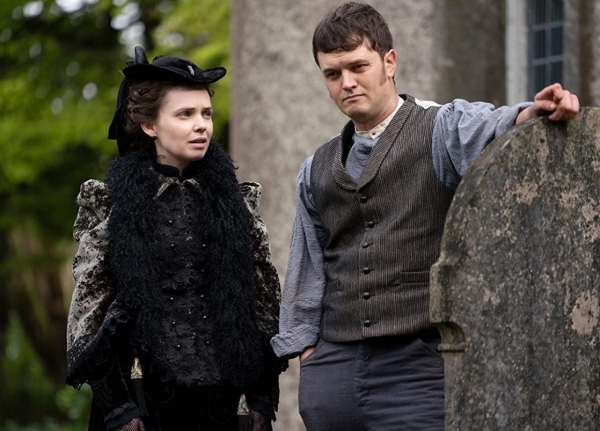 As I mentioned before, the bulk of the costuming was standard “Victorian” with a lot of emphasis on mourning clothing. The only characters that don’t wear somber suits or gowns are Blennerhassett’s sidekicks, Connall Malloy, a gravedigger with an interest in photography, and Nancy Vickers, Blennerhassett’s niece who swaggers around with a cigarette in one hand because she’s scandalous. 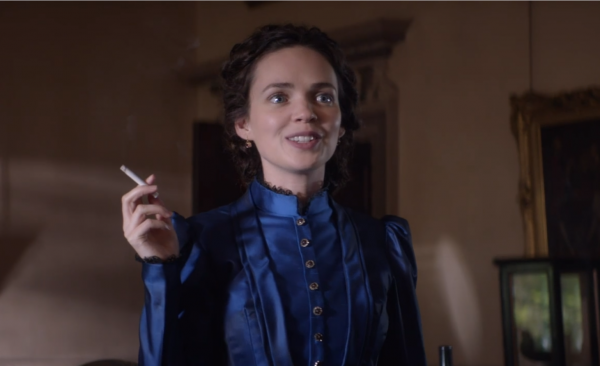 God, this character grates on my nerves, but she’s the only one who wears reliably interesting costumes in the entire show. The struggle here is real. 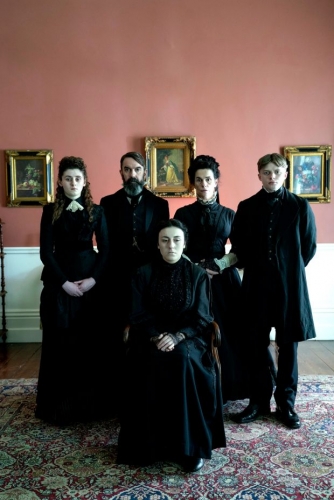 The costumes in this very early scene in the first episode gave me hope. 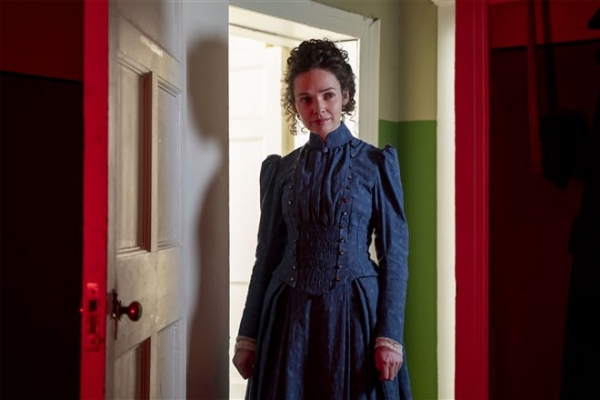 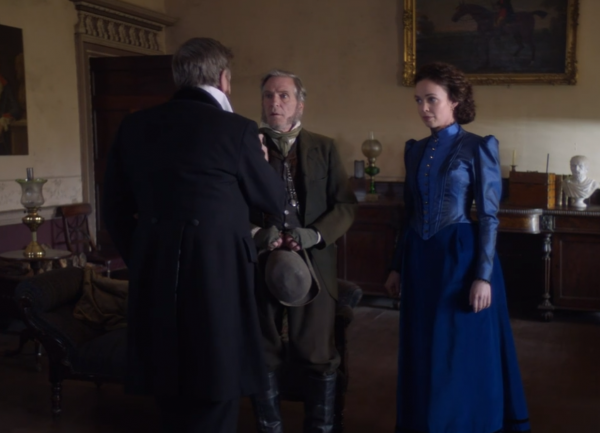 Her typical color is a rich blue. 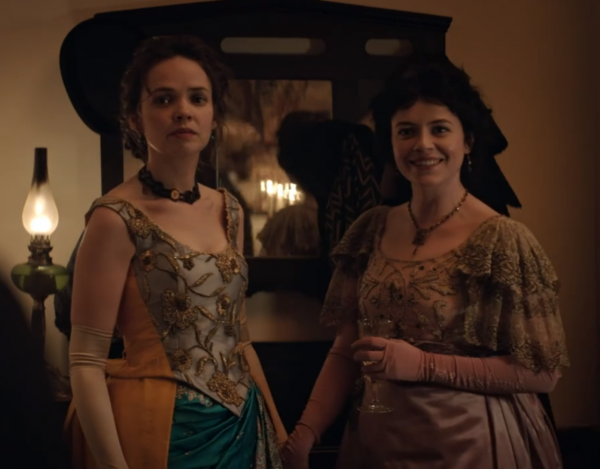 But then this … I question all of whatever is going on with Nancy’s party dress, because… 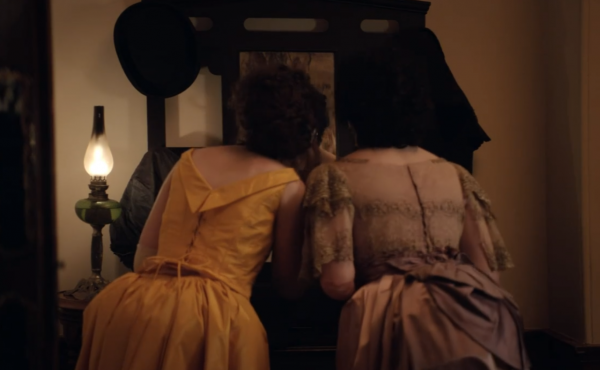 In the back it’s a completely different dress! 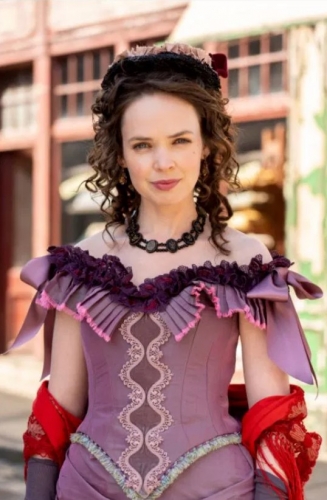 And then there’s this. She’s supposed to be under cover as a “working girl,” but it’s really obvious this is one of her party dresses being pressed into service by the addition of that red shawl. It’s meant to be ridiculous, but still.

It honestly surprises me that this show got optioned for a second season, and the reviews out there are fairly positive. I don’t think I’ll be sticking with this one.

Did you watch Dead Still? Share your thoughts with us in the comments!