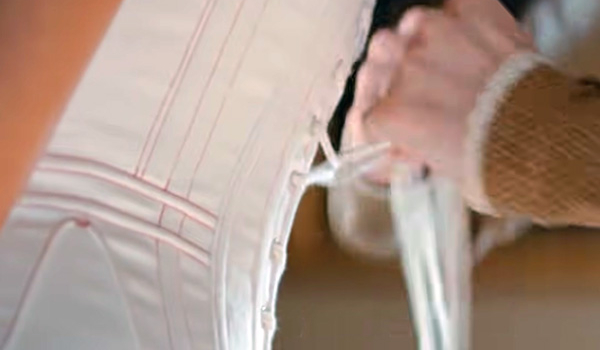 Ah, the venerable tradition of corset whining! All three of your Frock Flicks writers have worn corsets, sometimes for twelve hours or longer per day, sometimes for multiple days in a row. And we can tell you what any corset wearer who has any conception of historical ideas about female bodies can tell you: THEY’RE NO BIG DEAL.

Does a corset constrict you? Sure, sort of along the lines of the feeling you have in your arm when you’re having your blood pressure measured! Restrict your breathing? Sure, slightly! But we’ve all done HIGHLY aerobic dance in corsets, and let me tell you, there was no fainting involved. (Check out this video of the hugely popular 16th century “Volta” dance if you don’t believe me, or this short documentary about English Country Dance. I performed with an English country dance troupe for two years, and I danced with the energy equivalent to jogging with no problems — in a corset). Does it feel good to take off your corset? Sure, along the lines of taking off a bra or tight clothing!

Why do modern people assume corsets must be truly agonizing to wear? A large part of it comes from the late nineteenth century dress reform movement. According to an excellent review article in the Chronicle of Higher Education,

“Feminist dress-reformers blamed corsets for sapping women’s strength and keeping them from achieving equality with men… [while] 19th-century medical reports that attributed diseases as varied as tuberculosis, breast cancer, scoliosis, and prolapsed uterus — not to mention hysteria, insanity, and ‘impure desires’ — to tight-lacing.”

Another reason has to do with changing perceptions and expectations about bodies, particularly those of women. Historically, from the sixteenth century through the nineteenth, clothing for men and women featured varying levels of structure. There was no particular expectation of comfort, and the goal of clothing was rather to create a virtuous, appropriately sumptuous (to your class station), and beautiful (to contemporary eyes) appearance. Moreover, for women, corsets created a fashionable silhouette and what historian Susanne Scholz calls a “‘defensive wall’ around the female body,” which, she argues, “so sartorially supply the rigid body boundaries that are the preconditions of proper subjecthood in the West but which are found to be lacking in the ‘natural’ bodies of women” (“English Women in Oriental Dress,” in Early Modern Encounters with the Islamic East: Performing Cultures).

Meanwhile, although nowadays we generally have an expectation of physical comfort in our clothing, we have essentially internalized the corset. Instead of using our clothing to create a fashionable shape, we now have the expectation that our bodies should be “naturally perfect” through diet and exercise. (Although how many of us who wear bras, for example, rip them off the minute we get home? We still balance comfort with what is considered socially acceptable).

Costume designer Alexandra Byrne weighed in on this issue:

“I’ve been asked a lot about corsets and discomfort and I would say number one, a bespoke corset — a corset which is made for you — there is no reason in the world why that corset should not be comfortable… I think it’s a very easy soundbite to say, ‘my corset was agony,’ and people sort of want to hear that. But a bespoke corset really should be comfortable. There is something marvelous in feeling that sense of relief when you’re let out of it at the end of the day, but that’s not to say that you’re in excruciating agony when you’re wearing it.”

(Although I will note that I have worn both custom and standardized/sized corsets, and while the custom is lovely, they’re both FINE).

It’s also worth noting that corsets cannot, in fact, reduce your shape any more than your individual body type will allow. Meaning, unless you are doing serious waist reduction training, your corset isn’t going to reduce the size of your ribs. So those with less body fat generally have less reshaping than those with more.

With all that, let us all scoff at actresses whining about corsets!

“Tom told us that Suranne Jones, who played titular star Anne Lister aka Gentleman Jack, ran into problems with her corset and it started giving her hives. ‘Suranne, because she was doing so much physical work like jumping up and down on carriages and jumping over walls and striding everywhere, she did begin to get damage from the corset,’ he revealed. ‘Normally in period dramas you’re normally just sat down and looking pretty, but because Suranne was moving around a lot we ended up having to remake her corset and changing it to a ballet corset by putting stretch panels in it to make it movable. She was getting welts in the original one from really bad friction. You can’t really jump up and down wearing a corset” (Back Into The Closet).

“When unknown actress Ruth Wilson was chosen for the role of Jane Eyre, she…found herself in agony after being forced to wear a tiny 15-inch waist corset. Suffering with rashes and skin burn, the drama school graduate had to be issued with a new corset every two weeks. ‘Poor Ruth was in constant pain,’ said a BBC insider. ‘She is naturally a very slender size 10 but the 15-inch corset that wardrobe gave her was simply minuscule and utterly restrictive. Three people had to ease her into it every day and she had to breathe in, sucking her stomach in, while someone tied the corset up from behind. She could barley move in it, let alone eat or exercise, so Ruth spent the majority of her days on set in absolute agony. Several corsets were used during filming to try and relieve her pain but due to reasons of continuity, they all had to be the same, ridiculously small, size. She had red marks and painful-looking indents on her ribs and tummy from where the corset had been holding her in all day.’ …The fifteen inch corset reduced Miss Wilson’s natural waist size by eleven inches…” (‘Jane Eyre’s’ agony over 15 inch corset).

“Obviously, we had to wear corsets [in Maison Close]. I’d never worn a corset, and that was definitely a challenge, because you have to carry yourself in a completely different manner. And it was interesting, actually, because after the series (we shot for a few months), our waists changed–the way our waists were. Because they sort of tie you in so much and give you such a narrow tummy but then accentuate the hips. So my body actually morphed a little bit after the series. [laughs] It was incredible. And obviously, you’re carrying yourself really straight, and you can’t really lounge, so you’d have to sort of always have a very fixed and firm posture, which is very interesting.

[Interviewer] Sounds kind of painful…On behalf of all the viewers, thank you for enduring the corset.

[laughs] The most difficult was actually eating: eating with a corset on is a massive challenge!” (Brothers, Corsets, and Whips: An Exclusive Interview With Jemima West)

“Knightley…says wearing an obligatory corset is ‘positively awful.’ “It’s not really a surprise we were known as the weaker sex, because you literally cannot get a breath. So it’s sort of, as soon as you start getting emotional, if you’re doing an emotional scene, you can’t calm down. You can’t literally draw a breath to try and centre yourself again. It’s no wonder they were sort of fainting all over the place” (Keira Knightley loves period films, hates corsets).

“I actually fainted during my first fitting [for The Alienist] which gives you some indication [of what it was like to wear a corset]” (The Alienist’s Dakota Fanning says she “actually fainted” during her first corset fitting for new Netflix drama).

“Despite wearing period costumes for Lady Rose in Downton Abbey, nothing could prepare James for the ‘torture’ of wearing that corset in Disney’s Cinderella. ‘My corset was so tight, I could only have liquid food'” (That corset’s sheer torture for Cinders!).

“For the first month [of filming The Favourite], I couldn’t breathe, and I would smell menthol and it would make me think I was in a wide-open space and could breathe for a moment in time. After a month, all my organs shifted—it was gross, and if you don’t have to, don’t do it!” (Emma Stone Says Her ‘Organs Shifted’ and She ‘Couldn’t Breathe for a Month’ After Filming ‘The Favourite’).

[Note: Trystan and Kendra have now been joking for about a month, as they put on/take off corsets, “Well, guess my gall bladder just moved!”]

“The actress shocked fans of the 2001 musical Moulin Rouge! by revealing she broke a rib trying to get into her burlesque-dancer corset. ‘I re-broke my rib getting into it… I had this thing that I wanted to get my waist down to 18 inches, which Vivian Leigh had on Gone with the Wind and I was just like, ‘tighter, tighter'” (10 celebrities who opened up about the challenges of wearing corsets for roles).

“The Poldark star revealed she named her former corset ‘Cruella’ due to the pain it inflicted upon her… ‘[The corsets] are so tight I can only eat soup and smoothies'” (10 celebrities who opened up about the challenges of wearing corsets for roles).

“Elle Fanning said that wearing the constricting garment for her part as Catherine on Hulu’s ‘The Great‘ changed her body and she had to ‘learn how to breathe differently'” (10 celebrities who opened up about the challenges of wearing corsets for roles).

Join us in scoffing at allll this corset whining!