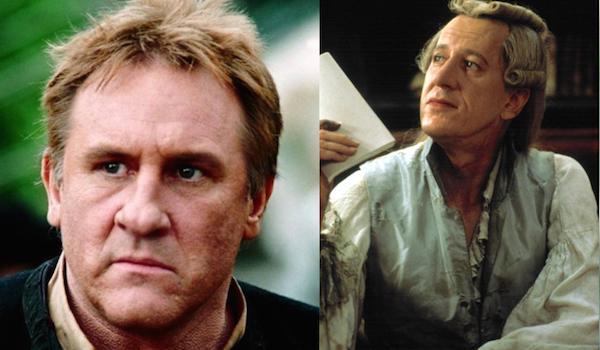 It is a truth universally acknowledged that I can’t stand Geoffrey Rush or Gerard Depardieu. This can sometimes make historical costume movie watching difficult, as there seem to be years where no movie can be made without them. The problem is I Just Can’t Stand Them, so any of my reviews of anything that involves them usually just consists of me can’t-even-ing, which I realize isn’t very nuanced. So Trystan is making me write this post in an attempt to articulate why they annoy me, and which will probably annoy you, because really, I have no basis for disliking them other than a general “UGH” reaction.

This is literally my face as I try to write this post. I’m not kidding.

But in celebration of Man Ick Monday (our Snark Week variation on Man Candy Monday), and because Trystan is a big meanie and is making me, I shall attempt to explain why I can’t stand Geoffrey Rush and Gerard Depardieu. This post will probably suck, because it’s just a visceral reaction that is incredibly hard to explain, so bear with and move along if you just don’t get me.

Okay, so Depardieu has had his moments (mostly, Cyrano de Bergerac, 1990) where he has harnessed his skills for good and not evil. But most of the time, I feel like both Rush and Depardieu are just Overacting Up the Wazoo. Have either of them heard of the term “nuanced performance”? Because it seems like they missed that class at acting school and went straight to Make It Super Obvious So the Audience Doesn’t Miss It!! In Vatel (2000), Depardieu may not jazz-hand all over the place, but he’s so fucking serious about being a thespian. Every line of dialogue just feels so overly crafted that my ass puckered through the whole thing. And then don’t get me started on his swashbuckling, randomly-French-accented, attempting-to-be-noble take on Christopher Columbus in 1492: Conquest of Paradise (1992). It was an interesting movie, weird costumes nonetheless, but I just felt like he went in saying, “I’m Gerard Depardieu! I couldn’t possibly attempt an Italian or Spanish accent, mon dieu! DO YOU KNOW WHO I AM??!!” Alright, so the Pirates of the Caribbean franchise is all about overacting — it’s supposed to be cartoony. And (at least in the first film), I loved Johnny Depp‘s over the top take on Jack Sparrow.

But Geoffrey Rush just chewed scenery like he’s chewing this apple, and it was as gross as this image is to watch.

TRY A LITTLE HARDER, GEOFFREY. WE CAN’T HEAR YOU IN THE BACK. And then fucking Quills (2000). We’ll get to the skeeze factor in a minute, but Rush’s imprisoned Marquis de Sade was all jazz hands, all the time. He’s immoral! He’s intelligent! He’s licentious! He’s the king of #nofucks! Yes yes we get it. CALM DOWN.

Probably more Depardieu than Rush, but both of them just feel like the personification of an unattractive, probably short and strangely bumpy, shlong. We are generally pro-penis here at Frock Flicks, so I’m not talking about the actual item itself. It’s just, and I’m sorry if this wounds the worldview of any men reading this, but here’s the deal: there are guys who are penis-y, and not in a good way. Usually you work with them (because who would voluntarily spend any time with these fuckers). They’re the personification of white male privilege, in that they have no idea that their smug sense of self-satisfaction is actually totally misplaced and irritates the fuck out of everyone around them. The fact that you happened to be born with a penis does not make your every thought genius, nor does it make you smarter or more worthy of airtime than me. Sorry, tangent!

So, yeah. I feel Depardieu in particular has probably never examined his own sense of smug superiority in the random fact that he was born with a particular set of genitalia. (Note: I have no basis for this judgement. Maybe they’re both committed feminists who spend their time volunteering at women’s shelters.) In Camille Claudel (1988), Depardieu plays August Rodin, happy to use and abuse the genius of Claudel and then throw her away when the shit gets real. Again, 1492: Conquest of Paradise. Why show a real take on Columbus when you can play the noble, tragic, misunderstood, anachronistically sensitive explorer? Am I blaming the actor for the script/direction? Hell yes I am. In The King’s Speech (2010), Rush was well cast as the know-it-all speech therapist who whips King George VI into public-speaking shape, but that doesn’t mean I enjoyed watching him. Rush actually was pretty good at Sir Francis Walsingham, spymaster to Elizabeth I, in Elizabeth (1998) and Elizabeth: The Golden Age (2007)… …except that I irrationally blame him for the totally made-up scene where he goes to visit Marie of Guise in Scotland, seduces her (WITH WHAT??!!), and then KILLS HER (NEVER HAPPENED OMG WHAT THE FUCK).

Yeah, and that brings me to my other point here — FILMMAKERS, PLEASE STOP CASTING THESE TWO AS SEXUAL PEOPLE. I’m sorry, but I hate the fucking trope of “old ugly guy still manages to fascinate and intrigue young hot woman simply because he has a penis.” IT’S BEEN DONE, IT’S STUPID, AND I HATE IT WITH THE FIRE OF MANY SUNS. In Vatel, Depardieu’s chef is older, uglier, and lower in status than Uma Thurman’s mistress-to-the-king. Yet somehow she’s still STRANGELY ATTRACTED to him. NOT BUYING IT.

But really, I may never recover from my one viewing of Quills. Kate Winslet, I thought! 18th century, I thought! Oh dear god. She’s the random employee at a late 18th-century prison (who apparently can’t afford an actual dress or jacket and is wandering around in her corset through the whole movie — the literal equivalent of you or I wandering around in our bra), he’s the Marquis de Sade. Who, yes, is supposed to be old and lascivious and slightly crazy. But christ on a crouton. Watching Rush go all madman-in-the-attic and, in particular, sleaze it up on poor Kate Winslet just gave me ALL the dry heaves. Yes, the role calls for him to be old and gross but also brilliantly interesting. But I still feel sexually harassed after watching him leer and grope poor Winslet.

I can get very excited about a big, weird nose on a guy (see Adrien Brody: YES, PLEASE). But there’s something about the bulbousness of Rush and Depardieu’s noses, which always seem to be looming at the camera and therefore at me, that just give me all the heebie jeebies. Rush actually was funny and well cast in Shakespeare in Love (1998), but THAT NOSE. Oh yes, Pirates of the Caribbean. Let’s take a highly unattractive nose and pair it with gross makeup and a pubic-hair beard. THAT’LL HELP. But the real deal, as seen in films like Camille Claudel, just gives me The Fear.

Alright, give me all the shit for irrationally disliking your two favorite actors EVAH. I welcome the shit-show that will be the comments section.