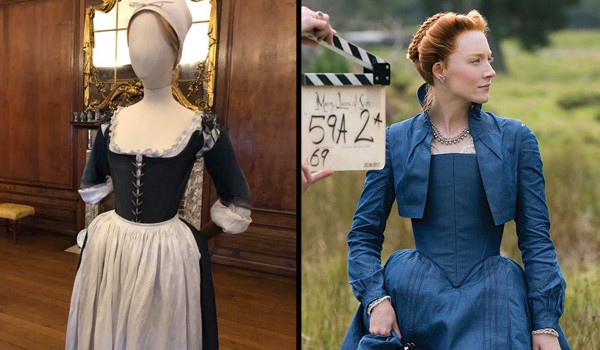 We get it when movie and TV costume designers don’t always have a huge budget to make costumes out of historically accurate materials. We don’t like it, but we understand. There are ways to work with a limited budget so it’s less obvious onscreen, and every designer worth talking about has tricks to get the best bang for the buck.

But purposefully using obviously modern materials to make historical costumes is a whole different kettle of fish. We’ve discussed endlessly the idea that sometimes a director has a VISION that the costume designer is working with to create in characters’ clothing. Fine, but that VISION should make some point about the story and the designer needs to execute it flawlessly. Don’t half-ass things!

Case in point: Two 2018 historical costume dramas, both focusing on female rulers, both with historical costumes that are not strictly accurate but one has a VISION that makes sense and works and one that just looks like shit — The Favourite (2018) and Mary Queen of Scots (2018). Guess which is which? Obviously, when you have Sandy Powell at the wheel, you’re gonna get great results, so The Favourite looks spectacular, in addition to being an excellent film overall. Meanwhile, Mary Queen of Scots is the predictable train-wreck.

You can listen to our podcasts about each one for details, because I’m just going to talk about one thing that shows how The Favourite wins and Mary Queen of Scots fails…

OK, just for shits and giggles, let’s start with a little historical background, courtesy of the Levi Strauss archives (they should know, right?). A lot of people think the word “denim” comes from “serge de Nimes,” a fabric woven in the French town of Nimes as far back as the 16th century. This may or may not be true. Serge de Nimes was made of silk and wool, so it’s not exactly what became known in the late 18th/early 19th centuries as “denim,” a cotton fabric in a twill weave. Around the same time as serge de Nimes was being woven, a fabric called “jean” was exported from Genoa, Italy, to England in large quantities in the 16th century. This fabric was a fustian, being a cotton, linen, or wool blend. Both fabrics were known for strength and durability due to their weave — they were always utilitarian. By the 18th century, denim or jean fabrics were made of all cotton and used for men’s clothes, particularly work wear. That evolved into the denim work pants with rivets that Levi Strauss created, and you know the rest of the story.

TL;DR — Denim was primarily worn by working-class men until the mid-20th century.

Thus, Sandy Powell using it for the early 18th-century servants in The Favourite is plausible, if not strictly accurate, while Alexandra Byrne using it for both queens’ 16th-century court gowns in Mary Queen of Scots is batshit insane.

Oh, but let’s go back to that VISION THING, shall we?

In Women’s Wear Daily, Byrne notes that all but five costumes were made of denim (I’m guessing the last few that Elizabeth wears) and says:

“The story is so strong that I didn’t want it to be ‘here comes another queen in another frock.’ I wanted to try and limit the materials I was using so I could manipulate the materials to tell the story. It’s such a current story; I wanted it to have a real accessibility to the clothes. I think sometimes period costumes can become a bit distant and a bit historical. All of those things kind of landed me in the world of denim.”

You probably know how we feel about making things relatable. If not, go read some of our opinions here. 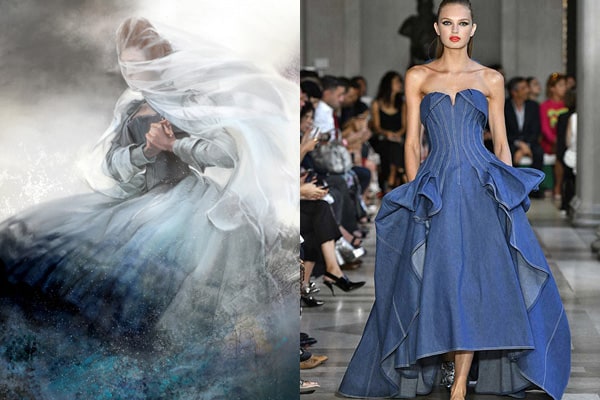 Byrne elaborates on the theme in the Hollywood Reporter:

“Given all of the artistic, contextual and budget choices, I landed on the idea very quickly of using denim. It’s not true to period, but artistically, the reason why I chose it was that I wanted the clothes to have an immediacy and accessibility.”

Not only relatable and accessible, but sexy! Because there’s only one definition of sexy to Alexandra Byrne, and it’s gotta be denim jeans, I guess. It’s certainly not historical costume, per Byrne in the Focus Features press kit:

“Number one is that I wanted to make the costumes sexy for this period. Actual Elizabethan is not sexy to me.”

Yeah, well not the way she’s doing it.

Byrne also has this idea that only modern fabrics can take the stress of filming on location for a movie. No idea why — I mean, really, it’s not like silk and wool weren’t used waaaaaay before modern HVAC was invented, right? That’s actually what was worn in all kinds of temperatures and all kinds of weather. They’re ancient natural fibers. As we rant in our MQoS podcast, wool is exactly what Scotland has been known for since time immemorial. Wearing wool in Scotland suits the climate.

But here’s Who What Wear talking about Alexandra Byrne and her design process:

The movie was filmed in Scotland and Byrne anticipated the weather posing a risk to the wardrobe and thus decided that they had to make everything (rather than rent). “They didn’t have dry cleaners back then,” she laughs. “They would’ve gotten wet in their clothes, the sun would’ve dried them, they would’ve sweated in them. I think they would’ve become quite molded to the body, which is difficult when you’re making costumes.” This led her to the idea of using denim. “When you take off your favorite pair of jeans, they don’t lay flat; they’ve got a sculpture to them. I wanted the clothes to have that life and belonging. If I limited the fabrics I was using, then I could manipulate a fabric to tell the story.”

Riiiiiiiiight. Let’s use denim because it wears better in wet weather than wool. Anyone ever worn denim jeans in the rain? Compare that to wearing a good wool coat. Which one sheds water, which one soaks it up? The jeans will be a soggy, uncomfortable mess, while the coat will keep you toasty and dry. 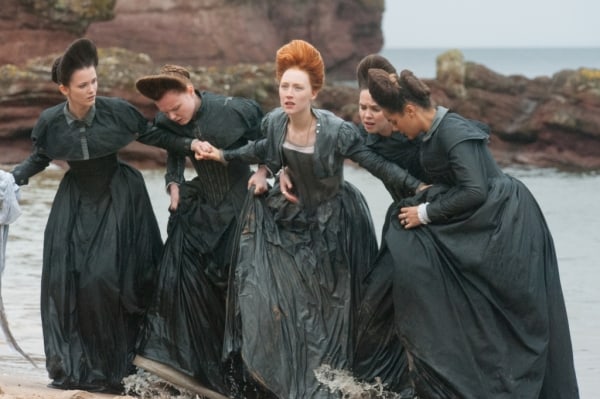 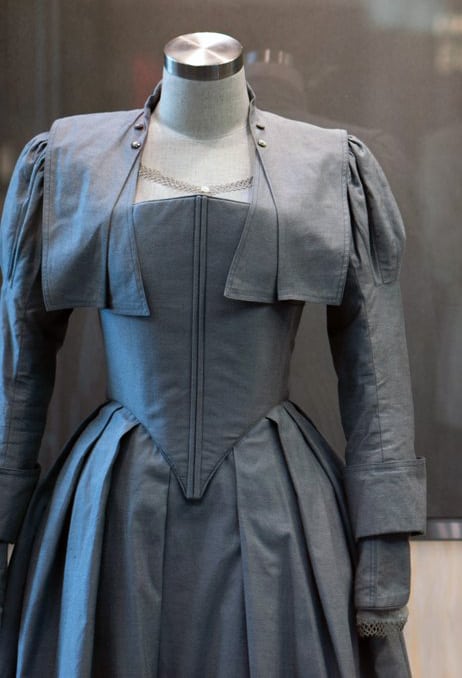 Seeing this MQoS costume on display doesn’t convince me of denim’s wonders.

In the Hollywood Reporter, Bryne started to say that denim was a hassle, but then went on to chat about all the totally non-historical shit she used:

One of first things we did was to make a men’s Elizabethan doublet in denim. It was horrible, and I went, whoa, maybe this isn’t going to work. But once I calmed down, I realized what I had to do was use denim with the historical and work out a balance of ancient and modern. … The brilliant thing about denim, there are so many kinds in different colors and weights. We were using a lot of factory surplus, and we had the luxury of very un-Elizabethan stretch denim.”

Let’s compare with Sandy Powell. First, she used non-historical materials because she was on a limited budget. Director Yorgos Lanthimos was making a small indie film with The Favourite and spent most of his money on the location, leaving Powell to squeeze a pretty damn stunning wardrobe out of a tight budget.

She told Entertainment Weekly about her cost-cutting tricks:

“I sent my buyers out to thrift stores to buy up anything in denim, so we had hundreds of pairs of distressed jeans, so I got all the shades of indigo and blue. They were all made for the kitchen staff: all the women’s corsets and bodices were made of denim, and the men’s britches and jackets were made from old cut-up jeans.” 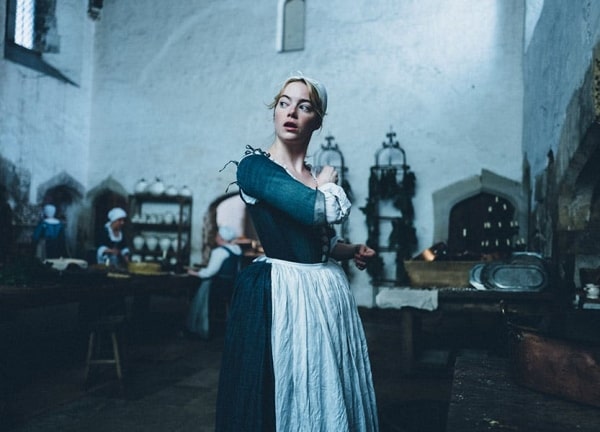 Abigail (Emma Stone) starts out as a kitchen maid & wears a dark blue gown. You wouldn’t know it’s denim unless you’d heard it from Sandy Powell.

These recycled fabrics saved money, and it was done with a purpose. As the Seattle Times comments in this interview with Powell:

Abigail, a character played by Emma Stone, begins her court career at the humblest level: as a servant in the kitchen. She’s wearing a dark-blue dress, like all the other kitchen staff, made of denim. “I wanted it to look like they were wearing workwear,” said Powell. “I used jeans that we bought from thrift stores and cut those up and turned them into the bodices and the men’s waistcoats of the kitchen staff, and the skirts.” 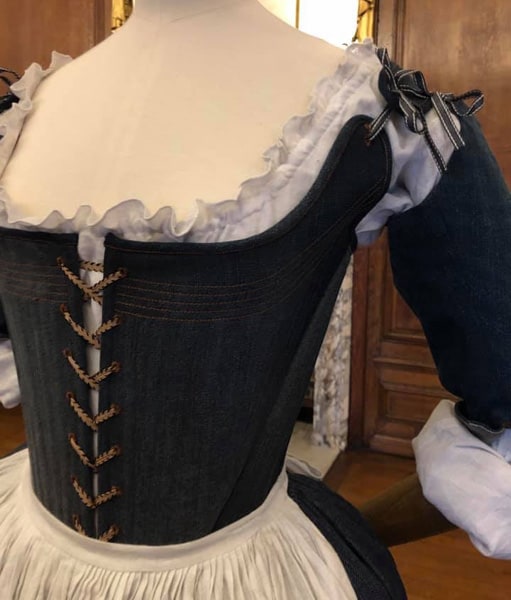 Our friend Loren took pix of this costume from The Favourite on display at Kensington Palace. I guess you can tell it’s denim, but it still works as a servant’s costume.

Sandy Powell purposefully used a working-class fabric on costumes for lower-class characters. It was appropriate and affordable. It blended in.

If you’re going to fuck around with historical costume, try not to be so blatant about, OK? Because we will notice, and we won’t take your lame excuses anymore. Level up.

So, denim in historical costume movies, have at it!