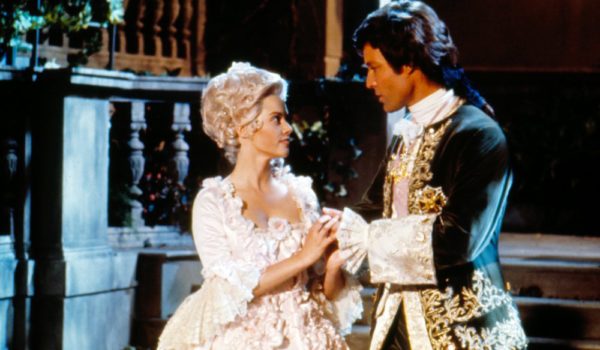 I thought this was going to be excellent Snark Week fodder, but to my surprise, The Slipper and the Rose (1979) is actually a pretty decent costume flick. It’s also a musical, which is not my usual cup of tea (that’s more Trystan’s thing than mine) but even though the plot was formulaic, the songs were pretty average (despite being written by the Sherman brothers), and the 4-minute title intro taxed the limits of my attention span, the costuming went beyond my expectations.

The Good Costumes in The Slipper and the Rose

The women’s dresses were surprisingly accurate, considering the unevenness of this period of cinema when it comes to costuming. Costumes were designed by Julie Harris, who had an impressive resume, but will forever be dear to me as the costumer of The Great Muppet Caper. I am such a sucker for a red dress, and unfortunately we only glimpse this one at a distance. Margaret Lockwood rocking it as the Wicked Stepmother. The Queen’s gown during the “Bride Finding Ball” song was stunning. I LOVE ANNETTE CROSBIE SO MUCH IT HURTS. The Queen Mother had an assortment of nice gowns that were hardly shown in full-length. Here’s one of the rare exceptions. And the Queen Mother’s lady-in-waiting also had a nice gown. As did these unidentified courtiers. A very pretty and elegant light pink taffeta gown for Cinderella’s big debut at the ball.

I give the costume designer props for attempting to recreate The Swing by Fragonard. Cinderella’s wedding dress was a nice take on a robe de cour.

The women’s hair and headdresses were, with rare exceptions, lovely. Chief hairdresser Barbara Ritchie would probably be best known from her work on Star Wars: The Empire Strikes Back. Even the extras got nice hairdos! Margaret Lockwood was fabulous as the Wicked Stepmother. Have I mentioned how much I love Annette Crosbie? The wacky hairdos were used judiciously, mainly on the Wicked Stepsisters where being an exaggerated caricature worked. The same goes for the hats on the Stepsisters. I love that frilly lace bonnet, but dear god you couldn’t pay me enough to wear one. I’m definitely getting a Norma Shearer Marie-Antoinette vibe with the wig.

I quite liked the King’s banyan… The Bad Costumes in The Slipper and the Rose

Some of the wigs were just WTF. I, too, am confused by this wig.

A significant number of the men’s costumes were made out of couch fabric. When contrasted with the women’s costumes, it really made them stand out. And not in a good way.

There was a definite shortage of bobby pins… What? I always make sure to leave my long hair down and perfectly curled whenever I’m cleaning the floors. Cinderella’s “spring time” work dress is a little too Simplicity 1776 Bicentennial for me.

The Ugly Costumes in The Slipper and the Rose

The historical mullets on Prince Edward and his sidekick, John. Ah, the classic “stick a weft of hair to the back of a guy’s head and put a bow on it” approach to 18th-century hair.

But the guys weren’t the only ones with unfortunate hair… Thankfully these ladies were just extras. I don’t know if I could have handled the eyestrain if they had had more than 2 seconds on film.

All in all, the film had far more hits than misses. You can currently find it on YouTube if you’re so inclined to watch it. It’s a nice way to spend 2 hours with a little eye candy.

What do you think of The Slipper and the Rose? Share in our comments!