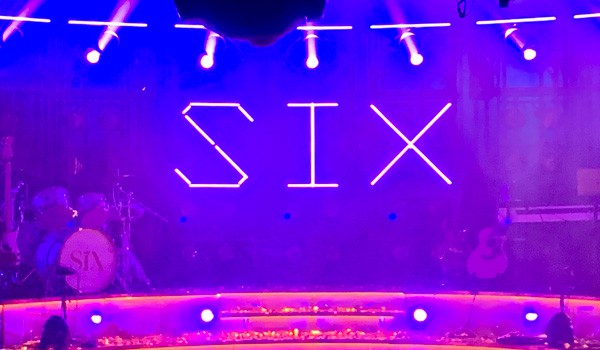 We usually stick to historical movies and TV because that’s our charter. But occasionally we venture out of our West Coast domiciles and hit the theater, or at least I have recently, and due to popular demand, I’m reviewing one of my excursions. Last month, I saw Six: The Musical in London at the Arts Theater and had a blast! This is a 75-minute musical about the six wives of Henry VIII — all from the ladies’ point of view. 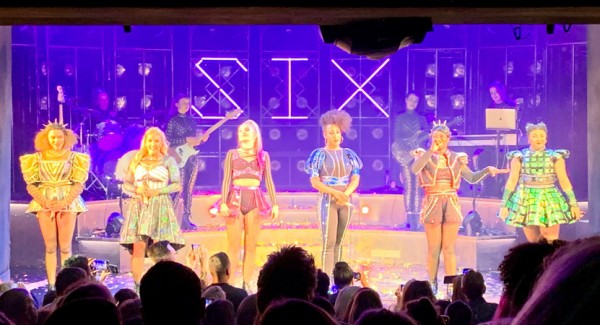 Catherine of Aragon, Jane Seymour, Katherine Howard, Catherine Parr, Anna of Cleves, & Anne Boleyn (I took this photos the finale, when the cast encourages the audience to do so).

The setup has all six queens performing a concert together, and each one is competing to see who is the ‘best’ because she had the ‘worst’ time with Henry. They sing a song about their suffering and trials (sometimes literal), and while that sounds kind of pathetic at first, the performances and lyrics turn the received history on its head. Each queen’s song shows the woman taking matters into her own hands, and she asserts her own place in history and (literally) has a powerful and surprisingly nuanced voice.

Catherine of Aragon’s song “No Way” has a Beyoncé-like riff as she is the most take-charge of the queens. Anne Boleyn’s ultra-pop, social-media referencing adorable “Don’t Lose Ur Head” reminded me of a Taylor Swift song. The sappy ballad “Heart of Stone” by Jane Seymour was my least favorite — it smelled of Celine Dion, and the lyrics were all about how Seymour was truly in love with Henry, ew. But then there was the HI-LAR-IOUS “Haus of Holbein” bit with fluorescent neon ruffs (the only big nod to period costuming, and a decade off at that). Followed by Anna of Cleves doing a raunchy Rihanna-esque number called “Get Down” that has the catchy “I’m the queen of the castle” line that’s been stuck in my head ever since. Katherine Howard follows up dressed in homage to Ariana Grande, singing “All You Wanna Do,” which sounds like a clever pop song, but the lyrics are an insightful look at power dynamics and sexual abuse. The survivor Catherine Parr wraps up the story a la Mariah Carey with “I Don’t Need Your Love,” bringing all six queens together. They moral of the story is they don’t need Henry to frame their stories around — they can be their own individual women. The soundtrack can be found on iTunes, Spotify, etc., so check it out!

Much like Broadway’s Hamilton, the casting is color-blind and inclusive, which reinforces the impact of the songs IMO. The night I saw the show, a curvy Asian woman kicked ass as Anne Boleyn and I personally appreciated the hell out of that. And the show lets the audience be part of the show by allowing photos and filming of the finale, so here’s my iPhone recording for y’all:

As you can see from this clip, the costumes are NOT meant to be historically accurate. These are rock/pop concert outfits first, with little nods towards the historical figure second. It works in context, especially when they’re singing and dancing. 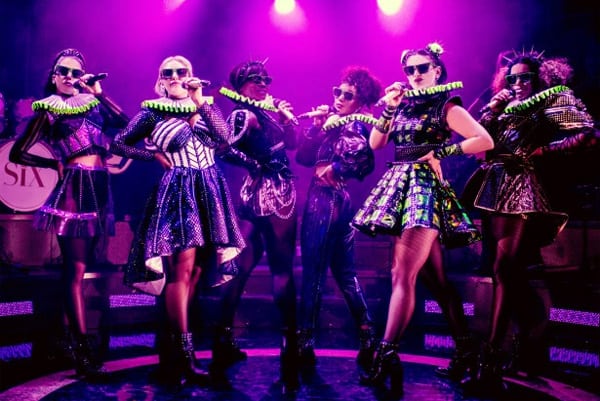 “Haus of Holbein” ruffs, not accurate for the Tudor court, but it’s a good gag for musical theater. Photo by Idil Sukan 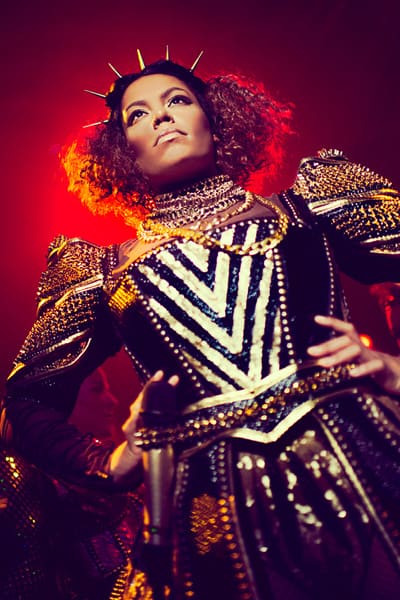 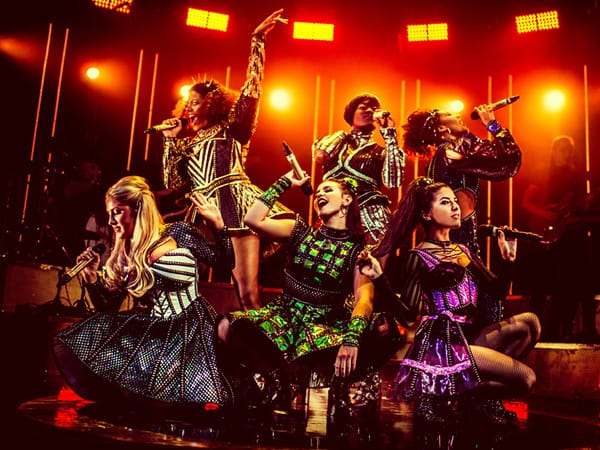 Would you see Six if it tours in your town?