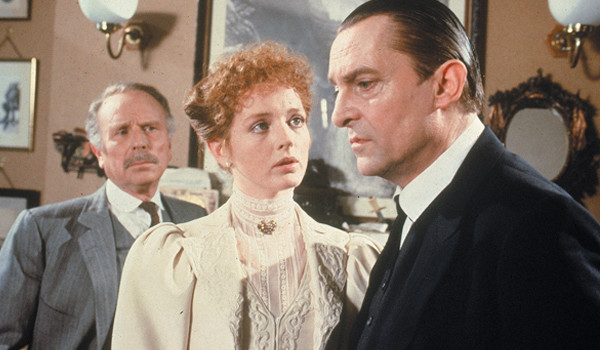 99% of murder mystery stories do not interest me. Sorry folks, it’s true! Not my cup of tea for a myriad of reasons. Mostly though, I don’t get into the stories. The puzzles seem so contrived, and I prefer either an emotional story or political intrigue for my costume drama. Unfortunately, that leaves a huge swath of historical movies and TV shows out of the Frock Flicks purview since murder mystery tales are very frequently set in ye olden times, whether it’s Sherlock Holmes, Agatha Christie (including Poirot), or Miss Fisher (yes, I did review that show, go check it out!).

We got some requests to review Benedict Cumberbatch’s 2015 Sherlock Christmas special that was inexplicably set in the 19th century. I did TiVo it and was going to force myself through it, but I got distracted. And guess what distracted me? A Sherlock Holmes serial starring Jeremy Brett from 1993! What can I say? I do love a classic.

This was part of the Granada Television / ITV production from the UK that had over 40 episodes, all featuring quality actors with excellent costumes and sets. I didn’t watch the whole series, just a few episodes, which gave a fine taste of the show. The specific one I want to look at here is towards the end of the series, a two-parter titled, The Master Blackmailer, based on the Arthur Conan Doyle story The Adventure of Charles Augustus Milverton. It’s a high-society mystery where a wicked art dealer played by Robert Hardy (Elizabeth R, Harry Potter) has dirt on everyone. And, relevant to my interests, his victims are mostly women in really nice 1890s clothes.

While I’m admittedly not a big Sherlock Holmes fan, I do admire Jeremy Brett. He’s a fantastic actor, he’s suave, he’s smart, and his Holmes has the right mix of the character’s arrogance, weird quirks, intelligence, and hidden depths.

This tale has multiple layers of deceit, but let’s focus on the ones with the best costumes, shall we? Who wouldn’t want to be at this picnic??? Charlotte & Colonel Dorking are going to be SO happy!

Except Col. Wonderful has a hobby he hasn’t mentioned to Lottie… Quite possibly the most artsy drag show ever. Digging the Klimt vibe here. Mikado? Me too, honey. The colonel’s lover, backstage at the show. Nice shoes! “Three little maids from school are we.”

Letters, we get letters! Both Charlotte and Eva are wearing perfect print gowns; Lottie in plaid, Eva in floral. Uh-oh, shit’s going down. This gives us a chance for a better look at Eva’s dress with its elaborate collar and excellent use of coordinating print on the upper and lower sleeves. So Dorking is a dork, but Charlotte’s plaid dress and pleated leg o’ mutton sleeves are spot-on.

Holmes and Watson get on the case. Not that anyone asked, it’s just something they do, I guess. He pretends to be a plumber and, uh, plumbs the maid for info.

Meanwhile, Milverton sets upon another victim, who is not-so-coincidentally connected to the last one. Eve’s ‘good morning, you’re being blackmailed’ dress. Note the handy mirror-shot of the gown’s back pleats.

Holmes and Watson try to get info on Milverton at the unveiling of Lady Diana’s new portrait. Have we mentioned how crappy “historical” paintings are in costume dramas?

Eva faints while riding (thanks to Milverton) and is taken to her aunt Diana’s house. Holmes and Watson follow because they’re nosey that way. Eva goes to Sherlock Holmes for help with this whole blackmailing thing. Holmes and Watson confront Milverton, which doesn’t have any good costumes, but there’s some snappy dialog, so y’know, you should watch this show. Afterwards, the detectives meet their client at a museum (it’s a theme) to discuss what happened. Eva brings Charlotte for moral reinforcements. Back at her fiance’s grand home, Eva is worried. For being depressed about the blackmailing thing, Eva is really well-dressed.

But gamely playing along with Holmes’ plan, Eva invites Sherlock, Watson, and Milverton all to her pre-wedding ball. Lady Diana views the ball from behind a moving painting — I need one of those things. Eva’s ballgown, in the only promo still I could find for this show.

During the ball, Holmes and Watson break into Milverton’s estate, but they’re not the ones who get the job done in the end. I’ll let you watch the show to see how it turns out — this one is available for streaming and (as you can see from the watermarks) can be found on PBS. I definitely recommend Jeremy Brett as Sherlock Holmes!

Are you a Sherlock Holmes fan? What’s your favorite series?