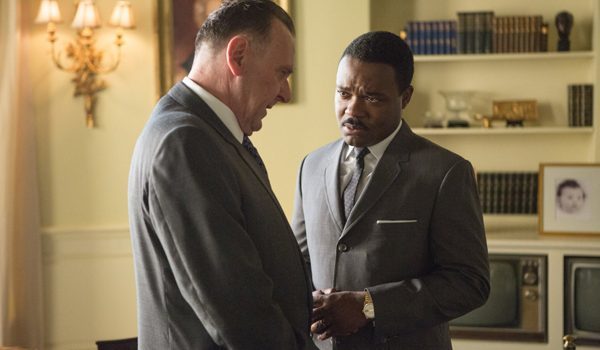 Portraying historical people on film and in TV is always open for criticism, even more so if it’s people within living memory. Thus the 2014 film Selma was criticized for not putting Lyndon Baines Johnson in the most flattering light. But the timeline of events in the film is accurate, and multiple sources rebut the Johnson supporters pointing out that, yep, Martin Luther King, Jr. did pressure LBJ to speed things up on voting rights. 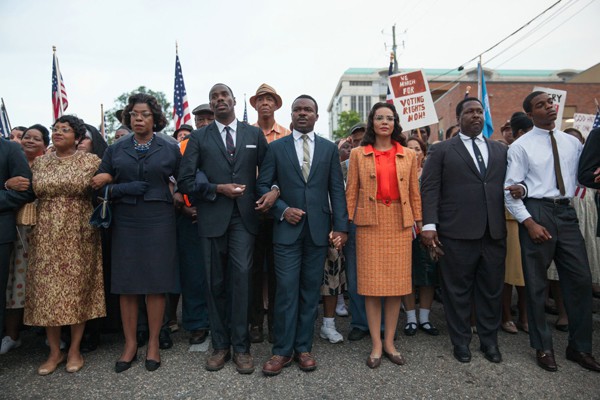 We at Frock Flicks have often criticized films based on actual historical events for not getting things correct, and we’re totally on the side of movies and TV using historical facts whenever possible. And while I wasn’t there on the Edmund Pettus Bridge in 1965, nor was I in the Oval Office overhearing LBJ and MLK discuss events, I can say that watching this film gives a deeper insight into what happened at those times than just watching Eyes on the Prize (1987), for example, an incredibly well-researched documentary that I also recommend. Selma is one of those rare fictionalizations that carefully and appropriately fills in the gaps and leaves you with a better sense of historical events than you might have started with. Even if you’ve read up on the Selma marches, this film’s depiction of the events has something new and relevant to say. 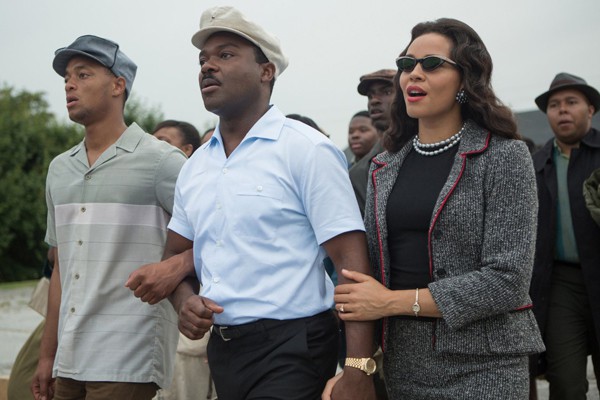 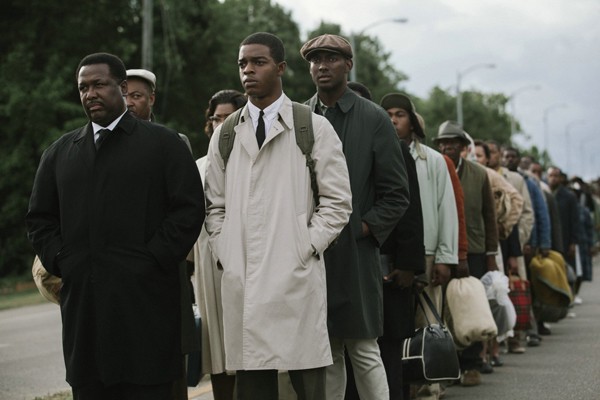 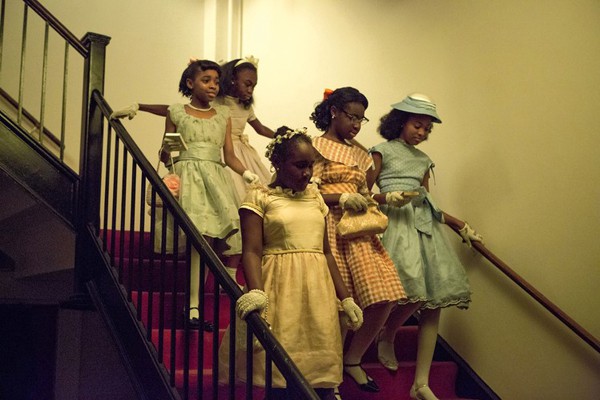 These little girls are discussing hairstyles before tragedy strikes. The scene is at once charmingly realistic and gut-wrenching.

As with recreating historical events, recreating the look of actual people who are well-known and who were extensively photographed raises the bar. Costume designer Ruth E. Carter used her own collection of Ebony magazines from the period as well as news footage of the marches, most of which was in black and white, as reference material. She also depended on authentic vintage clothing to make sure the crucial crowd scenes looked accurate. On MassLive, Carter described this process:

“Principal actors usually get costumes that are reconstructed. Sometimes they wear vintage. … There’s no way, in the time span and budget that we had, to give any one actor all custom-made clothes. … I was resourceful and tried to cut corners where I could because when you find something real from the period it’s better than anything you could find that’s been produced now to look like it was from that era.”

It was also important to make the costumes relevant to the place and character of the people, whether they were in crowds or at the White House. For example, Carter said: “Because of the nature of the marches, we paid careful attention to what the actors wore. These were poor people so we pulled a lot of plaid shirts, overalls, and work clothes. You know, dresses that a lady might wear at home.” And while all the men are wearing suits and ties, accessories were chosen carefully. Carter explained:

“Skinny ties were trendy. I was dressing religious leaders and government leaders so I didn’t want the people who were in office, like Lyndon B. Johnson and George Wallace, to look like they were following some young trend.” 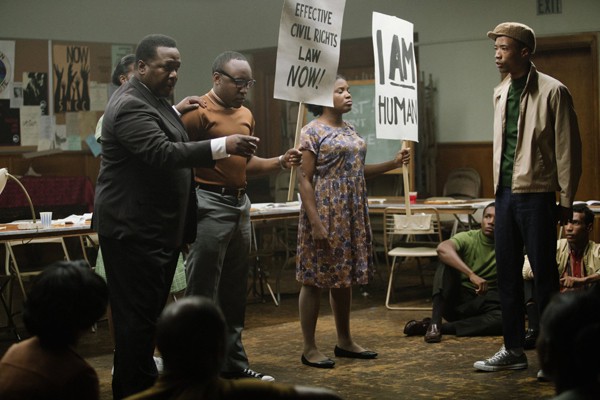 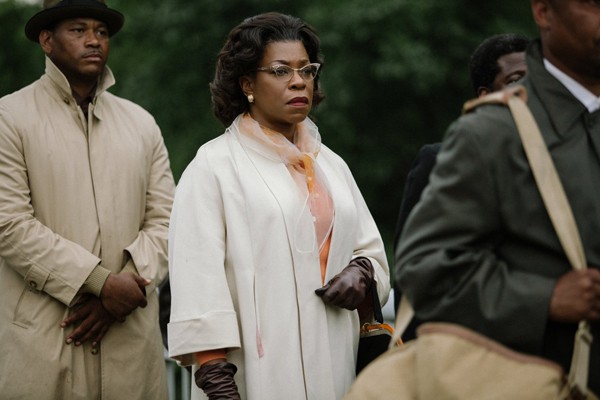 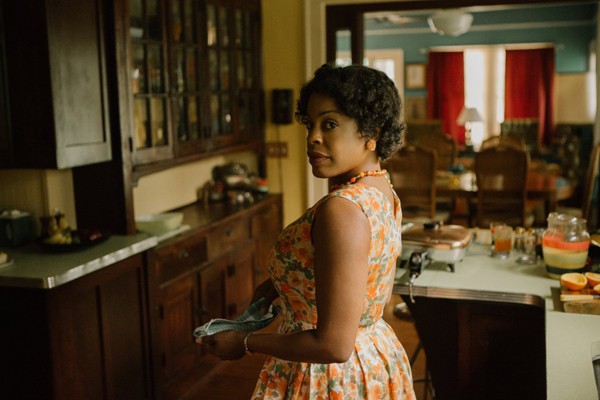 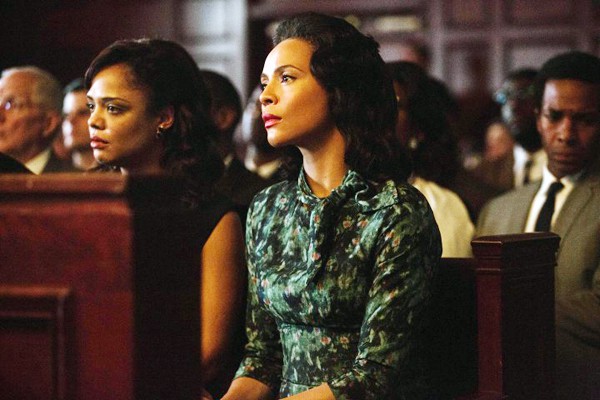 This dress on Coretta was a modern fabric, overdyed to get a more period shade.

One character who was not dressed precisely according to the historical research was Coretta Scott King (played by Carmen Ejogo). Martin Luther King Jr.’s wife was often called “the first lady of the civil rights movement,” and Selma‘s director Ava DuVernay wanted the first time Coretta is shown in the film to be impressive. The film opens with Mr. and Mrs. King dressing before he accepts his Nobel Peace Prize. For that event in real life, Coretta wore a simple dark suit with a matching black hat covered in feathers. In the film, she is glamorous in an evening gown that Carter constructed from a 1960s beaded bodice attached to a new full-length skirt. Carter explained to WEBN: “Ava felt like we should dress her in something a little more opulent, we thought she would look a little unusual in that dark suit.” 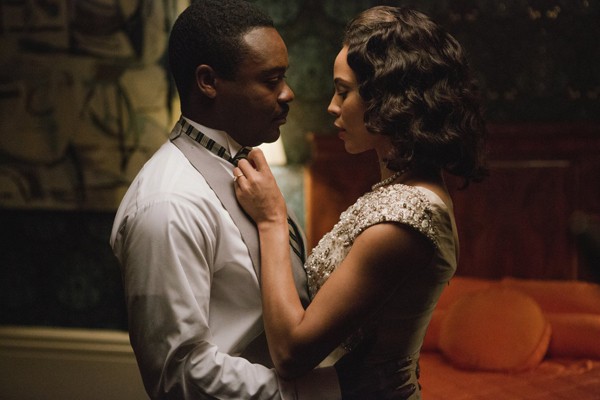 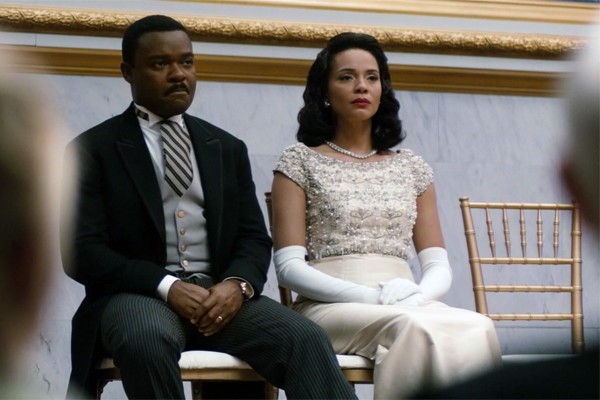 For more about the costumes in Selma, watch this interview with Ruth E. Carter:

Have you seen Selma? What did you think?