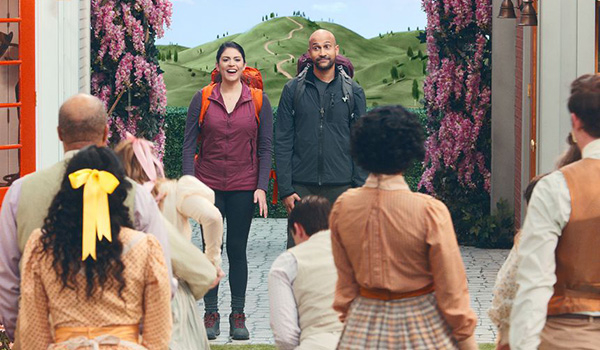 I’m the designated Frock Flicker who loves musicals, so it was just a matter of time before I watched Schmigadoon! (2021) on Apple TV. And predictably, I loved the crap out of it! But I don’t think anyone who is NOT a fan of classic movie musicals will derive much enjoyment of it, so take that as a warning.

The premise of this half-hour show (only 6 episodes long) is that a modern-day couple stumbles into a magical town where it’s like living inside a movie musical. People break out into song-and-dance numbers constantly and without realizing they’re doing it or thinking it’s unusual. And this couple — who, in their 21st-century life, are having a little romantic trouble — can’t escape the town until they find “true love.” If you think this sounds hokey, it is, and if you don’t like hokey, don’t watch. But if you take a risk on this show, you’ll be rewarded with high-quality musical bits and some grade-A snark of same, plus a story that isn’t quite as predictable as ye olde timey musicals actually are.

The cast is stuffed with brilliance on all levels. First, the modern couple are Cecily Strong (Saturday Night Live) and Keegan-Michael Key (Key and Peele) so they’re hilarious. The town’s repressed homosexual mayor (Mayor Menlove!) is Alan Cumming, who’s best known on Broadway for his performance as the queer Emcee in Cabaret. The dour preacher’s wife who hates everyone different is Kristin Chenoweth, who started her singing career in gospel before going on to Wicked. Comedy icon Martin Short shows up as a leprechaun, and Jane Krakowski does a turn as The Countess, parodying The Sound of Music with a dash of Hitchcock. 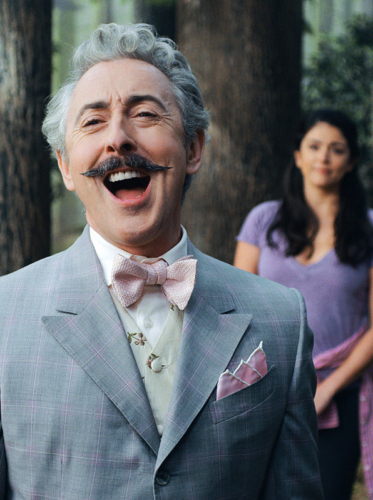 I’ll admit this show barely qualifies as a frock flick, but I’m going with it. The town of Schmigadoon — the name and premise are a riff on Brigadoon (1954) — isn’t specifically in a different time period than the 21st century. Yet all the townspeople dress in decidedly non-modern clothing that ranges from 1880s to 1950s inspired or mixing from those eras. It seems like the more repressive a character, the older of a historical era their costumes harken to. For example the super conservative Mrs. Layton (Chenoweth) and her cronies wear full 1890s gowns, while the sexually suggestive farmer’s daughter Betsy (Dove Cameron) wears something like 1950s pinup clothes. 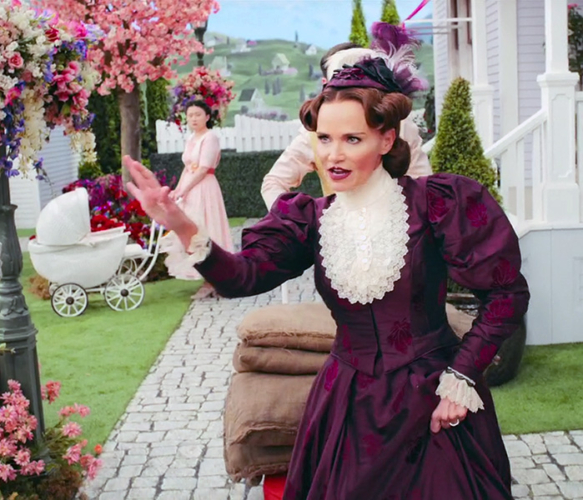 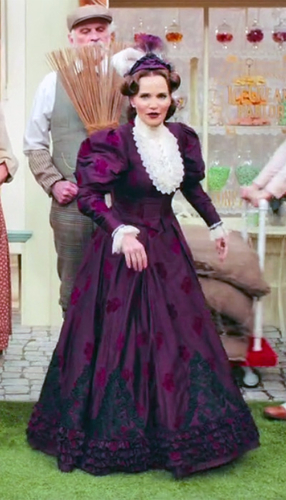 That skirt is gorgeous with lace appliques & ruffles, plus a giant black petticoat underneath. If I had time / energy, I would cosplay the hell out of her! 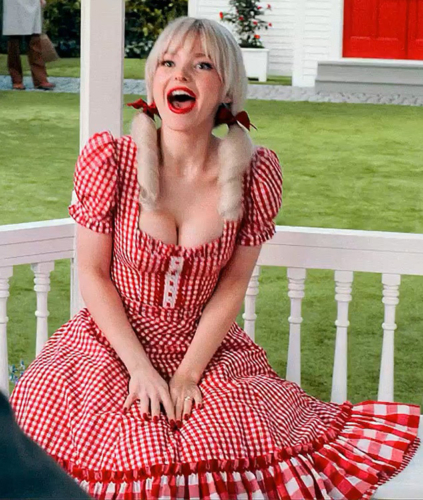 On the other hand, Betsy is all low-cut frills & schoolgirl pigtails. Shucks.

The townspeople (aka, the chorus) are dressed in light colors, providing the perfect background for whatever’s going on. The women have either a generic “Victorian shirtwaist and long-ish skirt” outfit or a vaguely 1950s full-skirted dress (all with lots of petticoats and bloomers on display when dancing), while the men’s outfits have vests, bow ties, and starched collars. 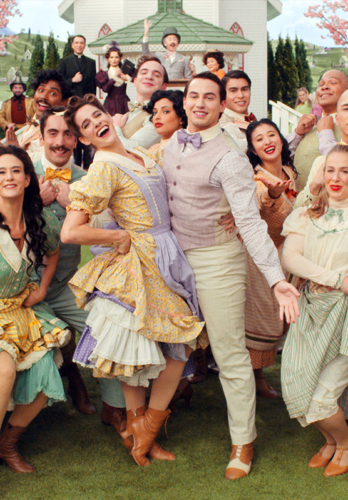 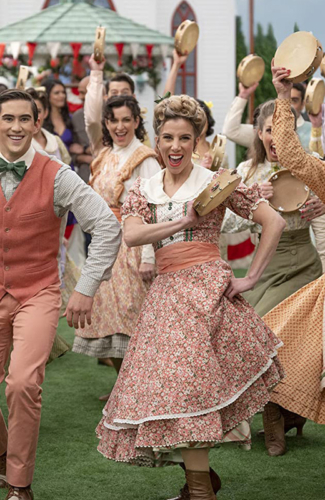 A couple exceptions to the pastels include the Mothers Against the Future, a group of biddies aligned with Mildred Layton, who, like her, are in full fussy Edwardian getup. Yeah, I love their costumes. 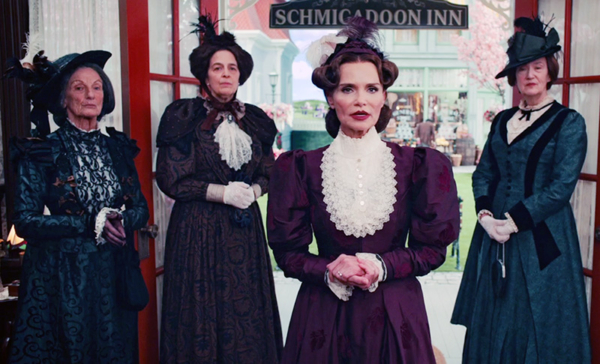 They’re all in black, burgundy, teal, & buttoned up. 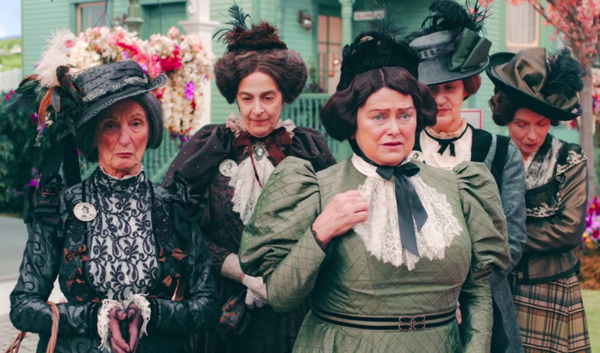 The mayor’s incredibly patient wife also stands out in her orange, 1880s-inspired gown: 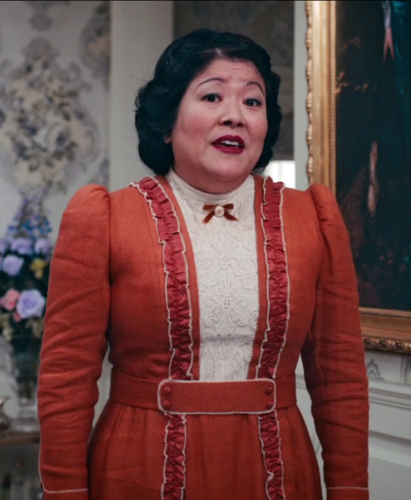 Simple princess lines get the idea of a historical style across. 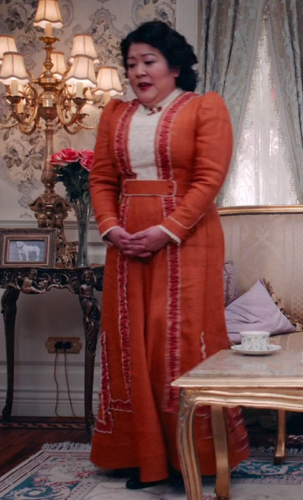 A few full-length glimpses show period-style trimming on the skirt & back.

And the independent school marm wears another of my (obviously) fave outfits: 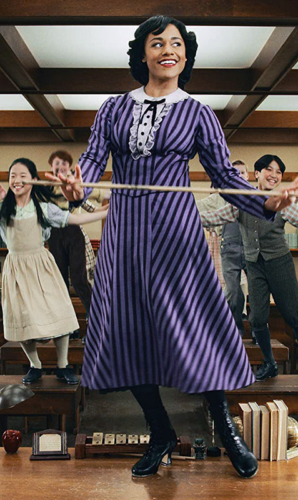 Her purple stripey dress is like a Victorian-inspired 1940s day dress.

If you’re already a fan of musicals, you’ll be amused by the direct references in song to things like Oklahoma, Carousel, The Music Man, and The Sound of Music. The show does poke fun at musicals, but with the affection of those who have deep knowledge of the subject. If that’s not you, maybe skip it.

Does Schmigadoon! sound right for you?