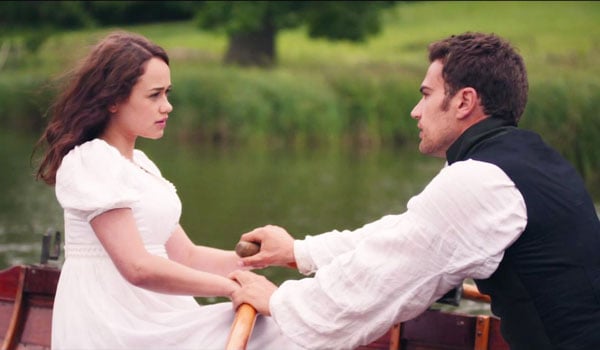 Welcome to my oh-so-spoilery review of Sanditon (2019), episode 7. Catch up with previous episodes here.

After the maddening pace and number of bad plot choices in episode 6, episode 7 gives us progress on the couples. The episode gives us a movement forward for nearly everyone. 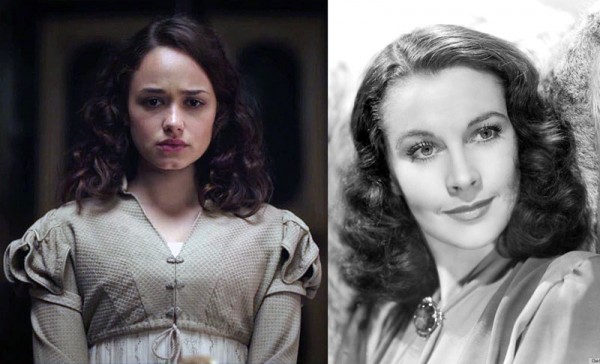 Confused Charlotte is confused, but has found her hot rollers, and a nice spencer, with a good sleeve detail. Her silhouettes throughout the episode are really nice. 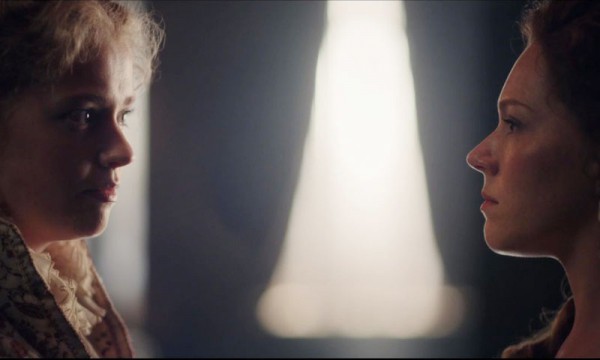 Claire and Esther argue again, and Esther learns that her brother has made a deal with Claire for a 50/50 split of the fortune. (Ha! She started with a 1/5th and keeps upping her stake.) Esther also learns that he had sex with Claire, something Esther never did with her bother. It seems Esther is finally realizing that he really is #handsomebutslimy. 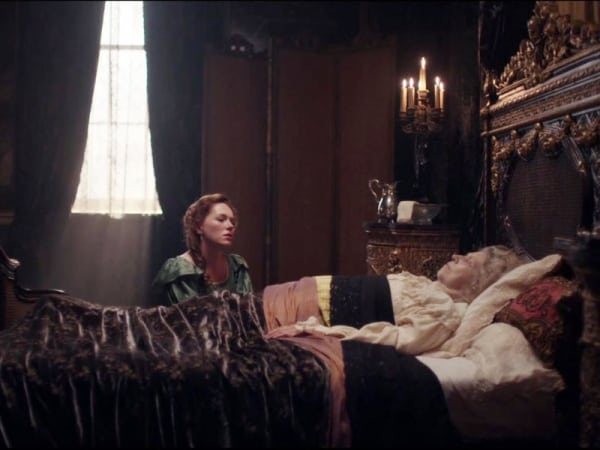 “There is not a single person on this earth who loves you.” — Esther

Esther spills everything she knows to the Dowager, who is suspected to die any minute. She recalls how the fortune has poisoned them, and good people have become mean-spirited and vile over it.

The next morning the Dowager has miraculously made a full recovery and clearly has heard every vile word her relatives have said to her. She even knows about the sex on the parlor room floor and complains that it will have to be refinished. LOL.

She justly disinherits Mr. Handsomebutslimy, and sends Claire back to live with her poor relations, penniless. 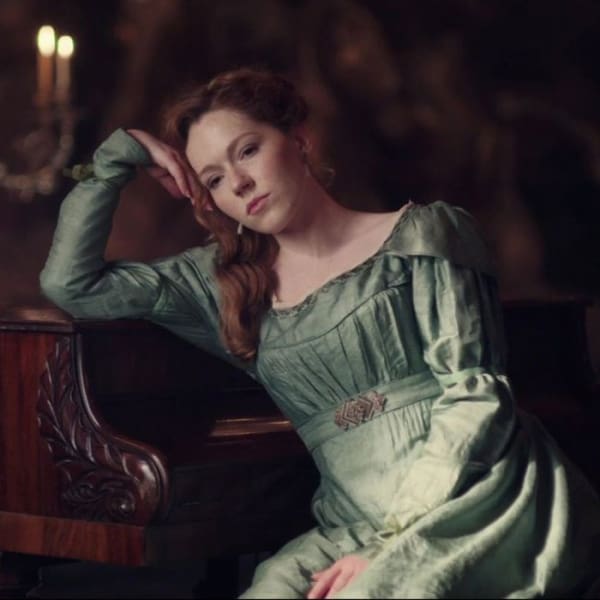 Better look at Esther’s dress. The waist is lower, perhaps showing in her style that she is ready to move forward. Her brother is a slime bag, she has ruined her relationship with the Dowager, and depression is setting in. 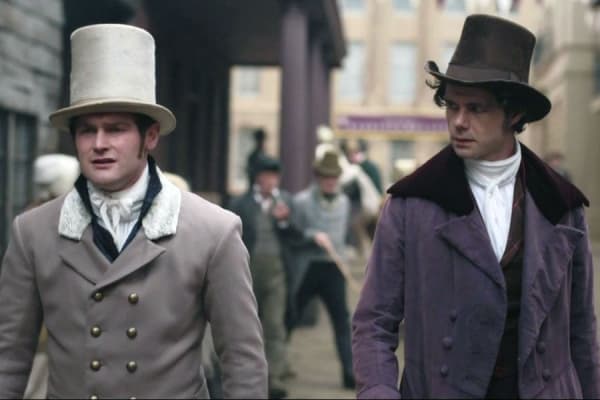 Meanwhile, Lord Babbington arrives for the regatta and tells his friend he has given up on Esther. The suits here finally show that Lord B is a lord, and he can dress very well. However, both of these men are of means, and their outfits are very different.The lapels on the vents and jackets are wildly different from each other. Babbington looks amazing here, but is he dressed too far forward in time for the setting? 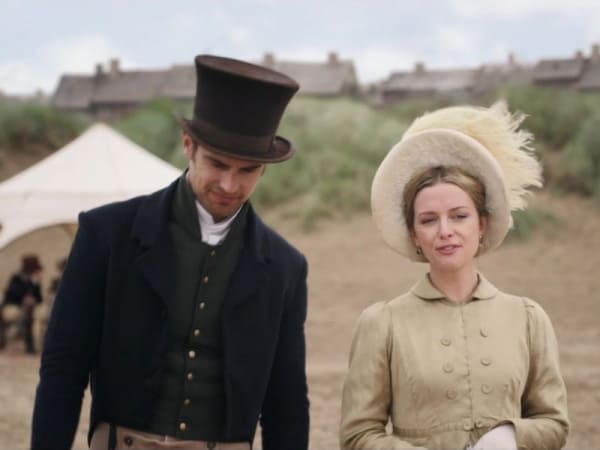 Mr. Hero spends time with his former sweetheart, who plans to marry him now that her first husband has died. Note that her hair is nicely up, she is wearing a proper bonnet, and the buttons on her pelisse are completely crooked. I paused, zoomed in, and even got a second screenshot to make sure — yup — completely off kilter. Also, the actress’s hair has about every color of highlight, lowlight, and frosted color to it, plus roots showing. Get her a wig! 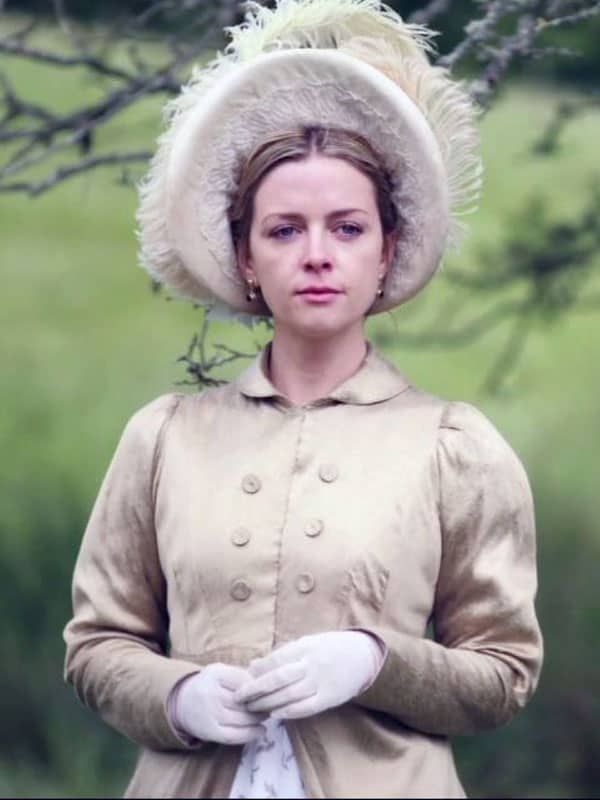 Crooked buttons, and her outfit could use a bit of lace at the base of her neck. 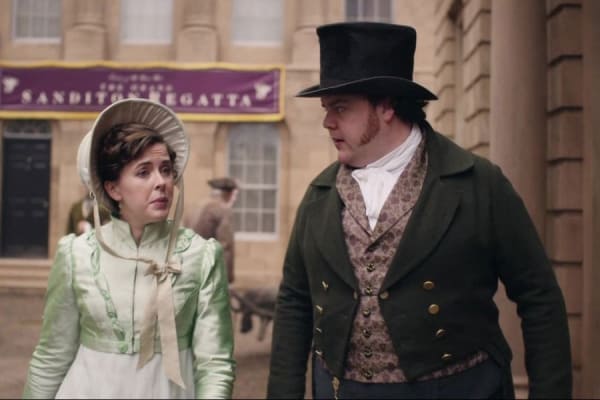 My favorites, the younger Parker siblings, are flighty and worried as always. 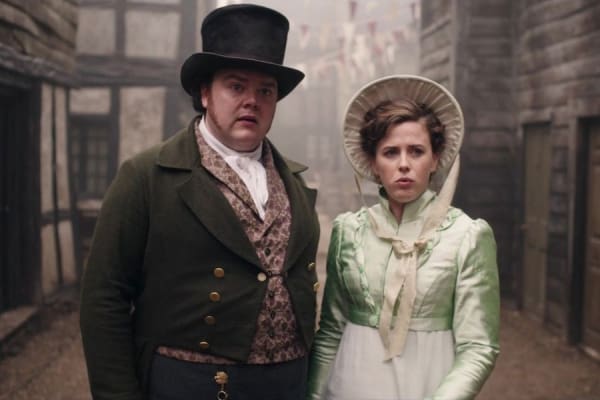 Then they see Lady Sarah has arrived in Sanditon for the regatta! Once again our Mary Sue has saved the day by bringing all of fashionable London to town.

I love their new outfits here — very in keeping with the time and the story, and they just look like such nice (albeit silly) people. 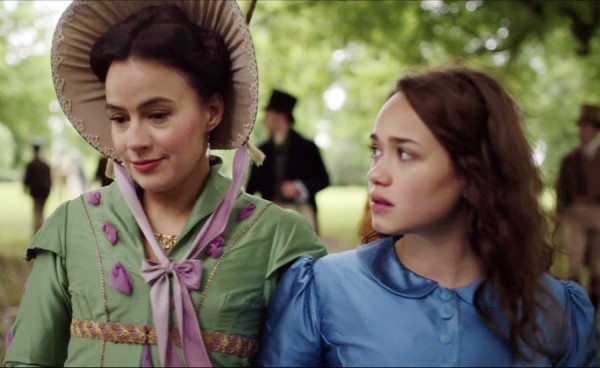 Lady Sarah, dressed nicely in almost fitting rental clothes, tells the audience and Charlotte, that she is not here for the regatta. She came all the way from London to continue her conversation with Charlotte. Really? Sigh. 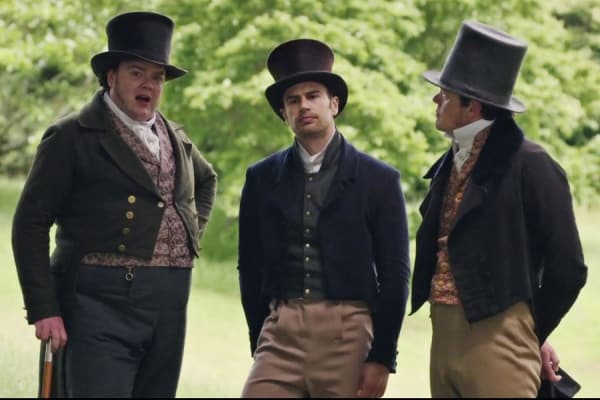 A nice shot of the three Parker brothers on the day of the regatta. Why is Mr. Hero’s waist so low on his body in comparison to the other two? It is too modern and looks out of place. 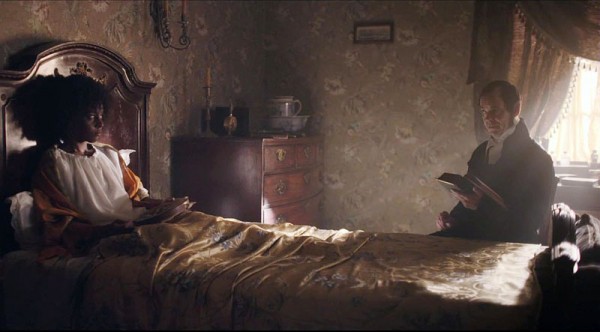 What is Georgina up to? Being bored to bits by the reverend. At least she has some idea that her reputation has been ruined. 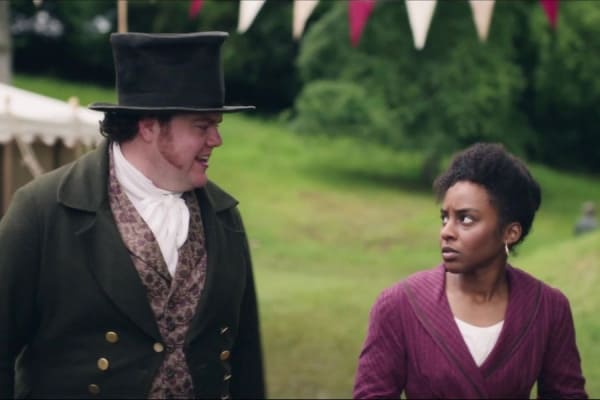 But wait — this is the couples episode! In comes young Parker with a silly ruse to get Georgiana dressed and out to the regatta. She exclaims that he is quite possibly the most confounding man she has ever met. I have high hopes for romance, but she does look pretty hostile. 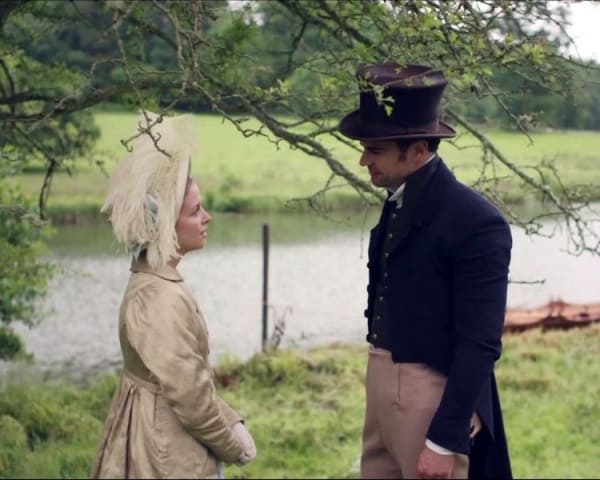 Mr. Hero avoids the question of if he wants to marry her. Love her hat feathers! 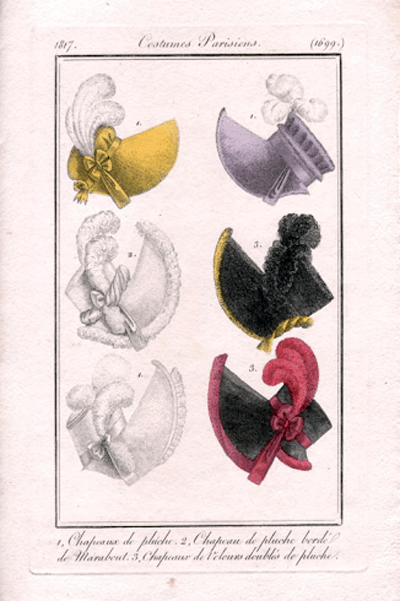 We see many of the women in this episode wearing better hats than before. This brim shape is a very particular one and was very in fashion. Sure, the show has the brims too short, but we give a little when it is important for a camera to be able to see their faces.

Meanwhile at the regatta, Lord Babbington has a meaningful (but hard to screenshot) moment with Mr. Handsomebutslimy. Babbington learns just how awful the brother has been to Esther, emotionally abusive for apparently ages. I give Babbington a ton of credit for seeing how that has clearly affected Esther, and going to see her. 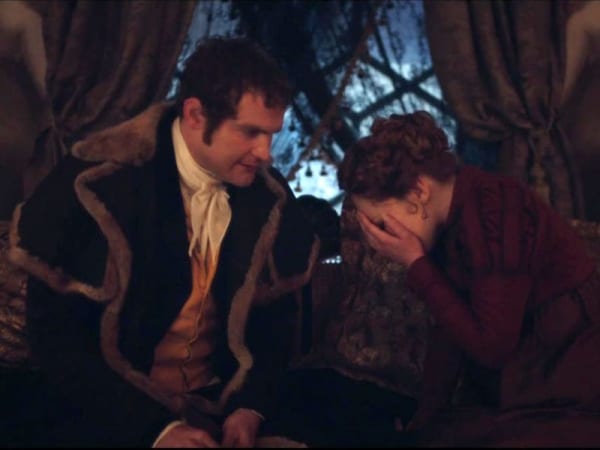 Babbinton then visits Esther and finds her packing and in a complete ruin. He comforts her by understanding and saying “He alone has had the power to determine your self worth and he has abused that power in ways I can’t even guess at.”

Ah, the power of a good moment of empathy and understanding.

He even has a handkerchief. 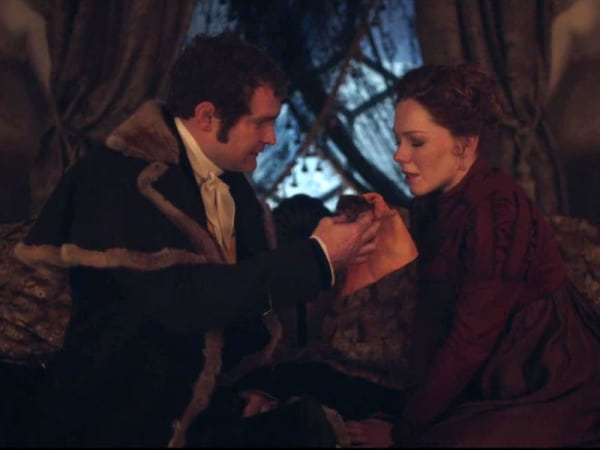 “Your brother is not going to make a victim out of you. I’ll not allow it.” — Lord Babbington. Seriously, crushing hard here. He was handsome before, but this kind of determination and caring? Romance novel stuff. 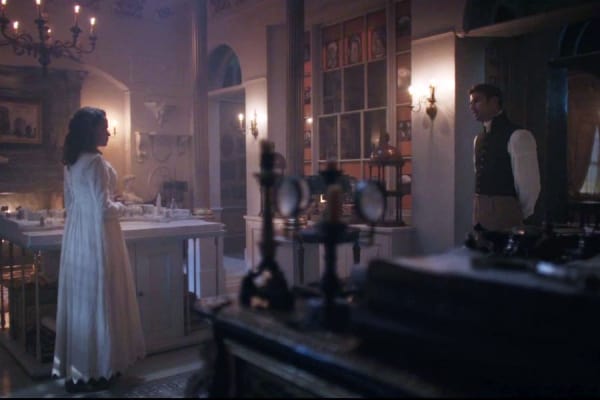 Compare that with the single most selfish Mr. Hero ever, whose best line is “I believe I am my best self, my truest self when I’m with you.” And then he leaves. And I am glad.