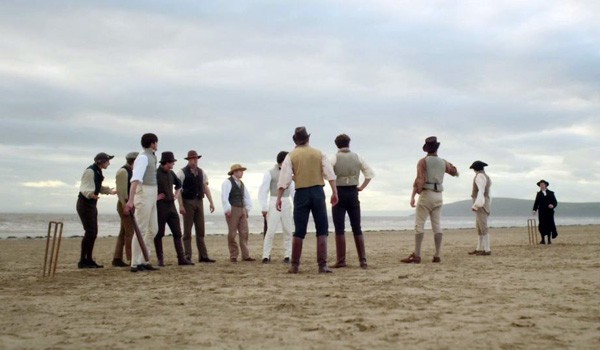 Welcome to my oh-so-spoilery review of Sanditon (2019), episode 5. Catch up with previous episodes here.

Georgiana and Charlotte discuss a letter from Georgiana’s beaux. Clearly, if we are going to play to the tropes, we will have Charlotte run off with the man, in an inappropriate fashion, and Mr. Hero will save the day. Me? Jaded? Nope, that is really what Georgiana is planning for the day of the town cricket match. 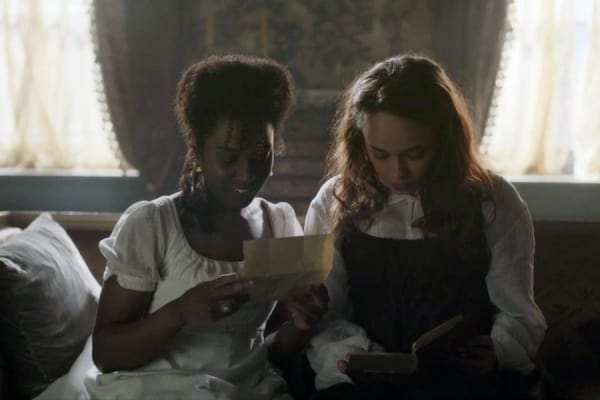 Meanwhile, Lady Denham reminds the two unrelated relations that they need to marry for money and the money will not be hers. 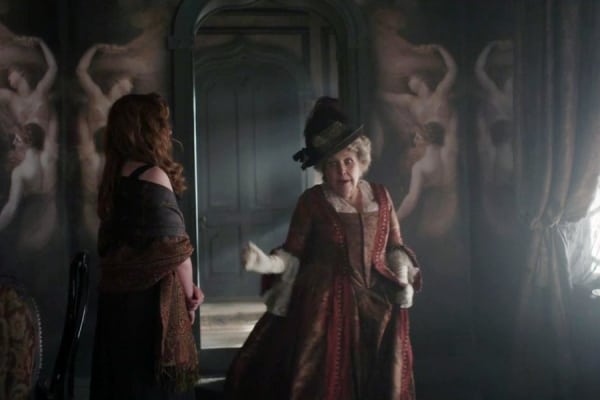 She is super pleased to hear of Lord Babbington’s interest, as am I if we get more screen time. Look, it is the naked odd nymphs again. 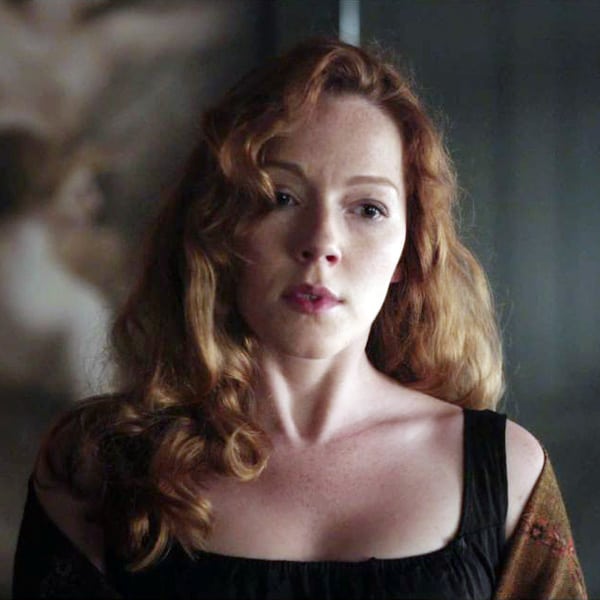 I love a good Hollywood wave hairdo, but seriously. Not here. 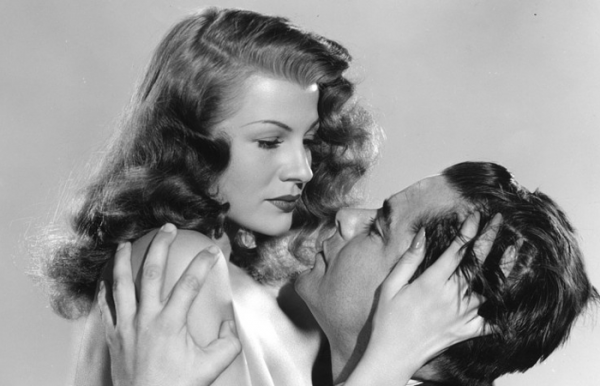 This would have been so much better: 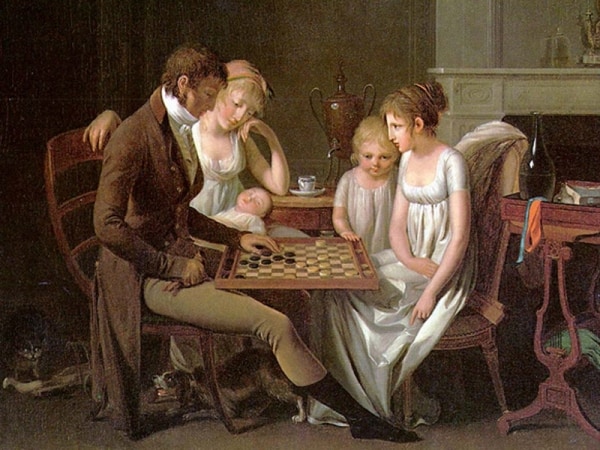 1803 – A Family Game of Checkers by Louis Leopold Boilly

Note: The maid looks fine, though her cap looks too big around: 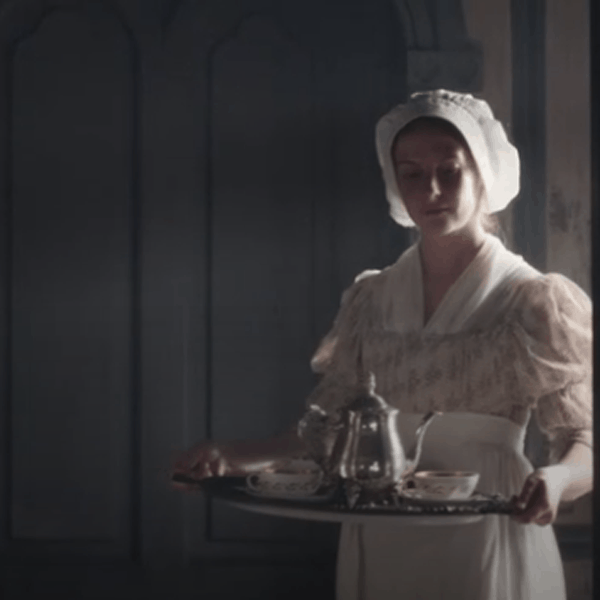 I have started trying to figure out what time of year it is supposed to be. Maybe August? There were mentions that the summer season was almost over. In this one scene, we have Mr. Handsomebutslimy in a shirt and robe, but his sister in no shirt at all and the maid in elbow-length sleeves. The levels of warm vs. cool clothing are all over the map.

The frolicking nymphs on the walls are clearly warm enough with fully naked females. Surely there are subtler ways to indicate that Claire is feeling vulnerable and hurt? 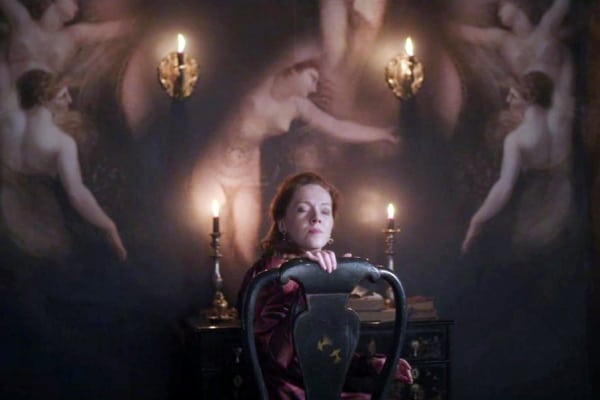 Financial tensions in the town are getting to a breaking point with Young Stringer letting Mr. Parker know that the workers are threatening to boycott the annual cricket match between the gentlemen and townsmen of the village of Sanditon. Meanwhile, Stringer wears another unusual hat shape. I’ve started noting his neck wraps, too, very nice one here. 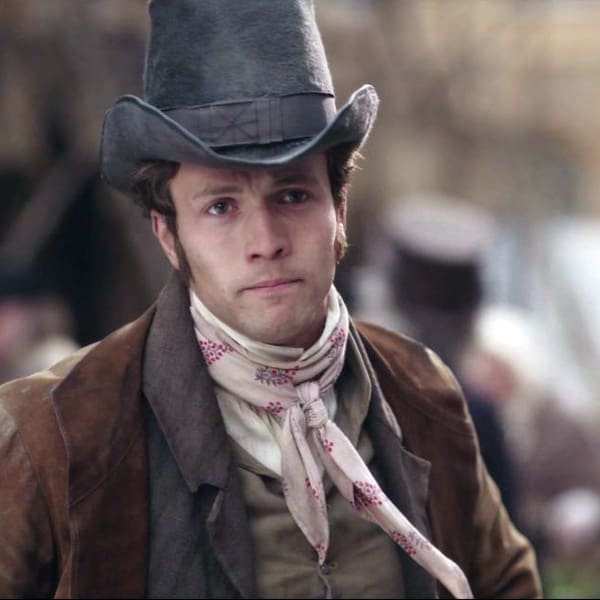 Everyone arrives at the cricket match — look at the lovely outfits on the ladies. Really pretty good here. Georgiana put a hat on, please, it is windy. 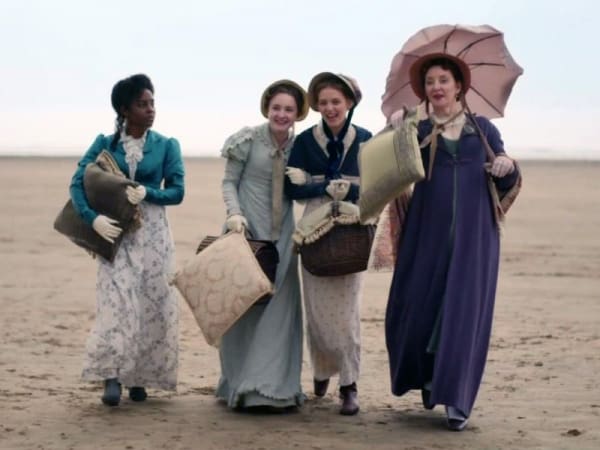 The men look pretty good here too — with Mr. Hero finally in the colors of the time. 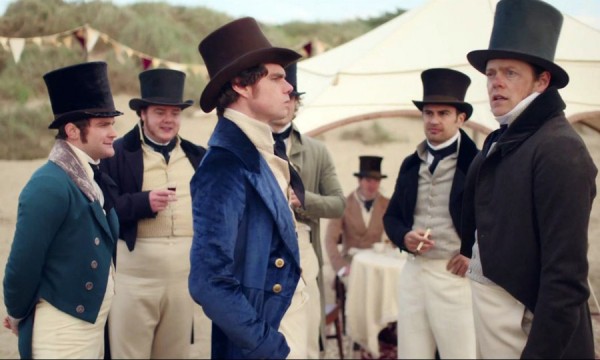 Here is where the cracks in Mr. Parker’s building scheme really show, with the workers showing up very, very late to the match. For full drama potential, the non-payment of workers comes out, and Mr. Parker leaves in an embarrassed huff.

This means the gentleman’s team needs one more player or they lose the match. Time for Mary Sue moment number 5 — of course, Charlotte will play and win the cricket match.

This means she can:

Charlotte wins at cricket in spite of her inability to find hairpins. 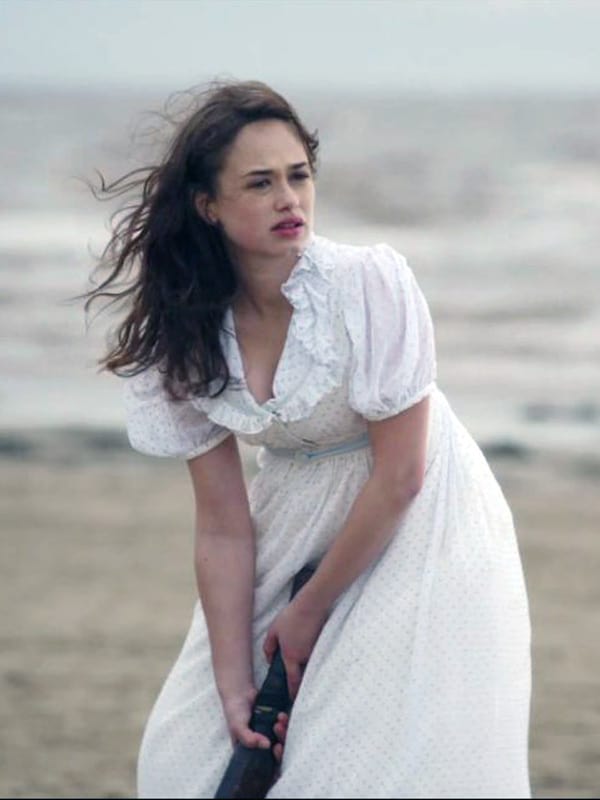 It is a lovely, period-appropriate dress, in a small print on white cotton. Look how squinty and unflattering the hairdo though. At least give her a ponytail! 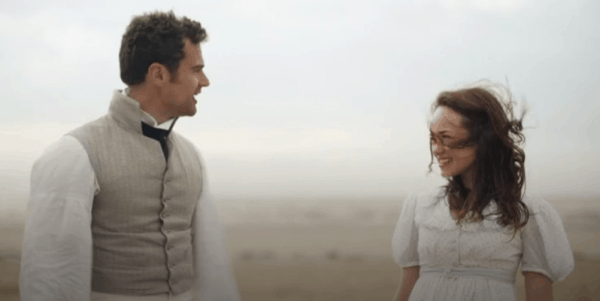 Did women play cricket in 1819? Yes! In mixed-gender teams? No. Compare with this lovely portrait of women playing from 1779. 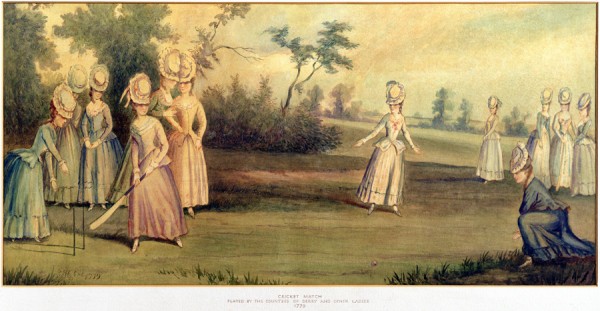 1779 – Cricket Match Played by the Countess of Derby and Other Ladies, via Wikimedia Commons

Aaaaannddd, of course, Georgiana runs off with her dreamboat. 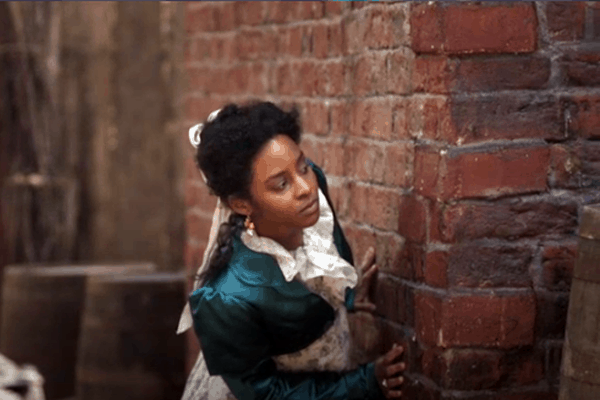 Mr. Handsomebutslimy and Claire flirt (ew) over the fact that if Esther marries Lord Babbington they will be the only two poor relations left. 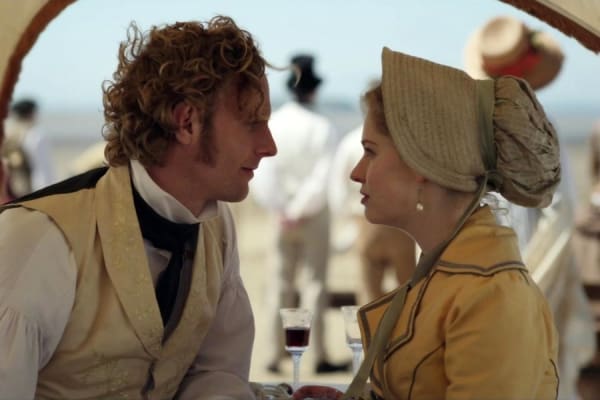 They have Claire flirting hard with the guy who tried to force himself on her? Um, ew? These people are not likable. 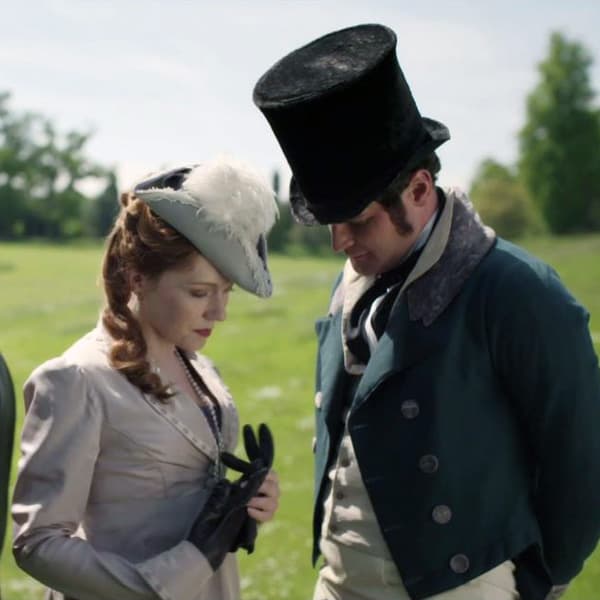 Two pretty people in very bad hats have a nice romantic chat. A tricorn and Victorian updo? Really? And poor Lord Babbington in his disintegrating hat. Their romance is delicious, and not even bad hats can tear me away. swoon 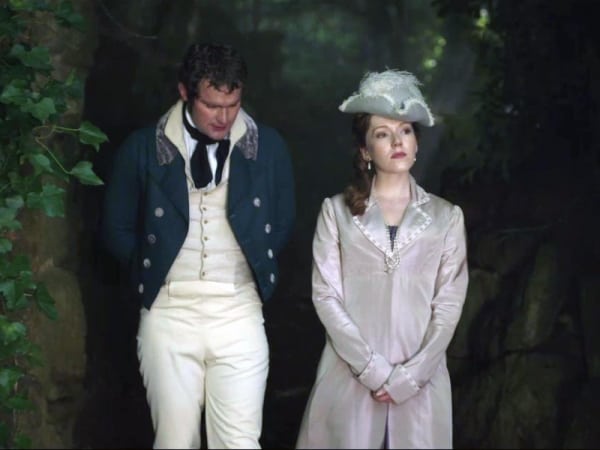 Esther throws epic shade, while slyly grinning at him. It is adorable! 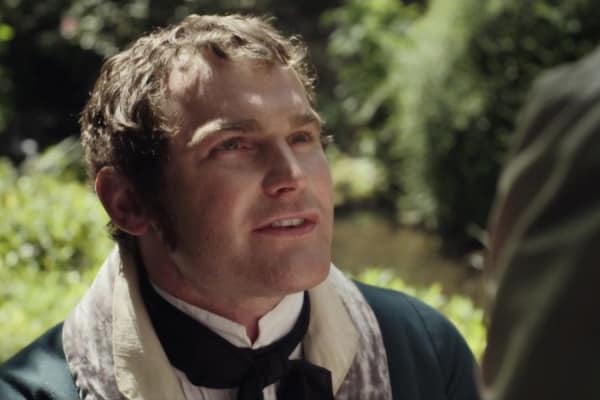 Hold the phone, we have a proposal! A lovely, romantic, Mr. Handsome & Swoony proposal! Squeeeee! Oh, wait, I don’t like this show. Oh wait, sometimes, I LOVE this show! Now, how was Lord Babbington able to leave the cricket match without another woman joining the team? Who cares at this point. Just go with it.

The incestuous/not-related siblings go around about the budding romance, naturally, with Mr. Handsomebutslimy getting jealous. Ew. To note in this and other scenes is how dark the settings are. All of the characters, when indoors, are in the darkest of places of their stories.

Excellent work here as these dark scenes are very difficult to get right with the lighting. This was quite likely the work of cinematographer Maja Zamojda, according to IMDB. She also worked on Frankenweenie, proving that the world is small. 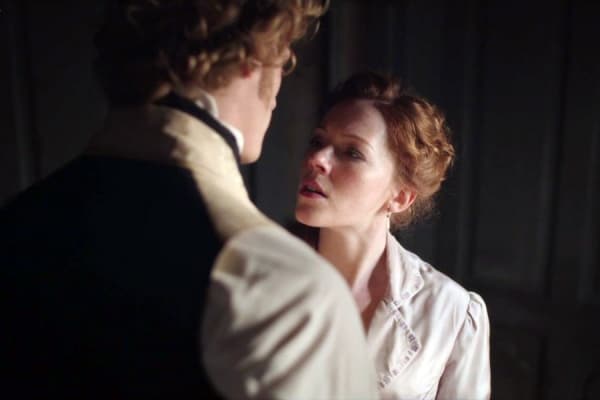 The lighting completely supports this moment between the actors. He is blonde, but here his hair matches her red. Note how their hair design is mirrored between the two. Her hairstyle is way out of time period, but as a choice for the scene, it is quite clever. 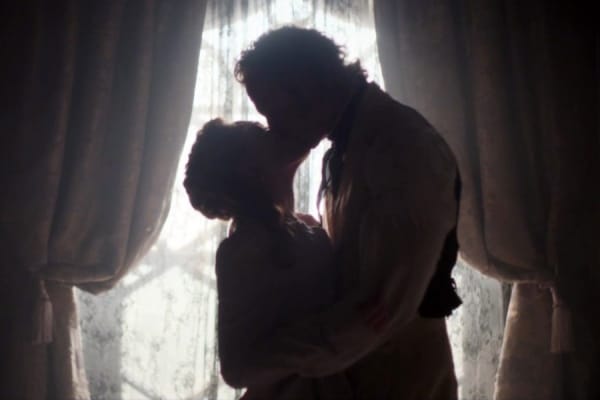 “As god as my witness, I’ll never sleep with my brother again!” — Jason Gasper, boyfriend. See? It is impossible not to heckle this show! 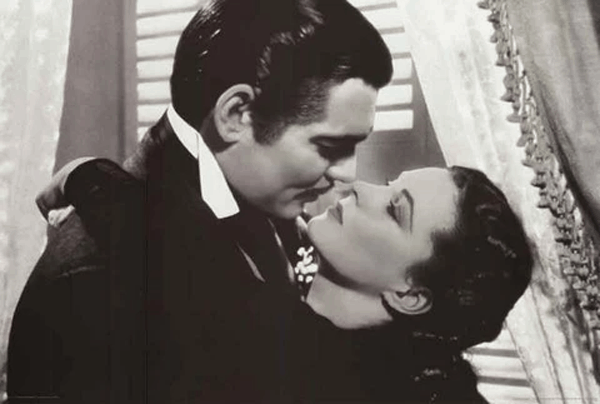 Kisses next to a window are difficult to light well — Sanditon’s designers are able to really ramp up the drama with lighting. 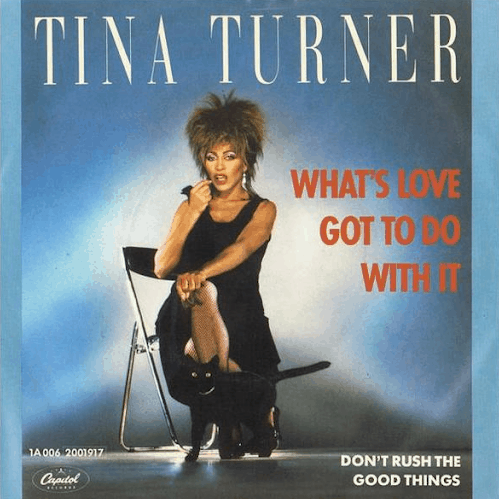 “What does love have to do with anything?” — Dowager Countess

Esther turns down the marriage proposal because this is episode 5, and the Dowager is so upset over it that she takes ill to up the drama. 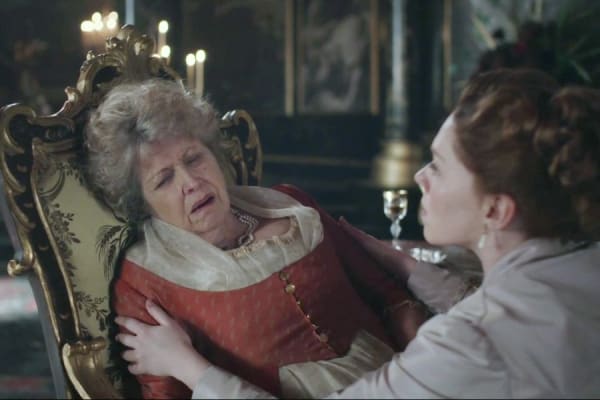 Notes on the Dowager’s dress — it has an old-fashioned 1780-1790s feel to it and lots of great period detail. Higher waistline than her other dresses and great layering to the expensive, sheer fabrics of her chemise and lace fichu. Also of note is that you can see in her posture, even slumped here, that she is wearing stays. She isn’t tight-laced and not spilling cleavage all over the room. This is a great example of stays making the silhouette on an older lady in a way that is normal day-to-day wear. 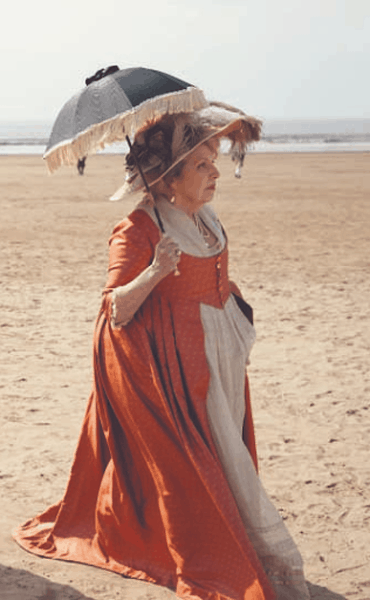 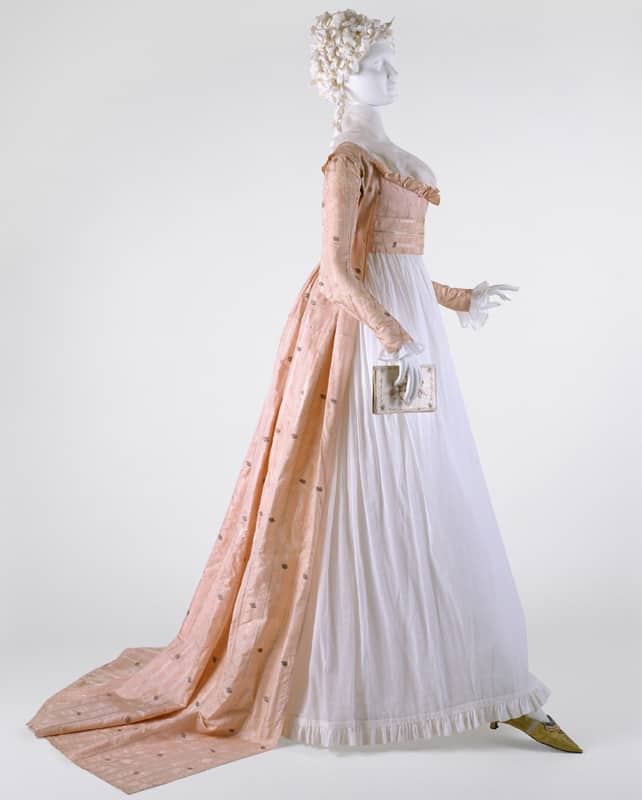 To conclude: We clearly need yet another cliffhanger to this episode, so Charlotte runs away alone to London to try to find Miss Lambe. Maaaarrrryyyy Sssuuuuuueeeeeee!!!!!!

We still have a couple more episodes of Sanditon to power through!