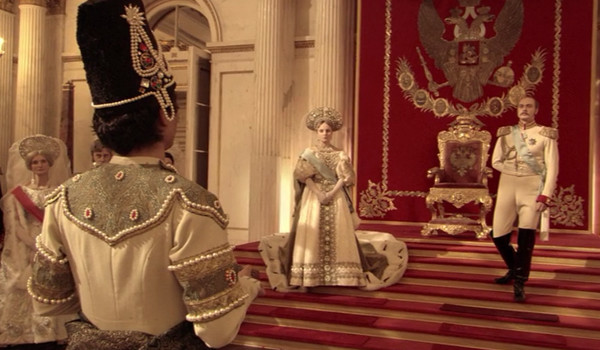 You’re cruising along through Netflix, and you innocently pause at a movie with an intriguing preview image. It kinda looks like a historical costume movie, a Russian one. You have an hour or two to kill, and don’t mind reading subtitles tonight, so you hit “play” and hope for the best. The result is like taking a tab of acid (from what I’ve heard, ehem) — because slowly, inexorably, weird things build up to a crescendo of WTFrock am I seeing here? What’s going on? Is this a documentary or fiction? Who are these people? What’s the deal with the hand-held camera / first-person thing? What period of history is this supposed to be? What the hell is everyone wearing and why?

Ladies and gentlemen, you are watching Russian Ark (2002). 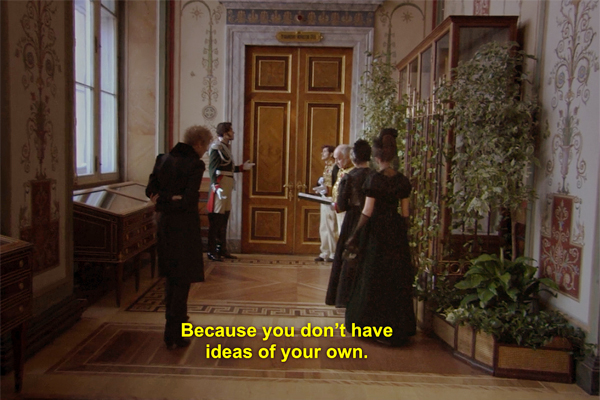 Critics praised this film for its innovation and freshness. Roger Ebert wrote, “Apart from anything else, this is one of the best-sustained ideas I have ever seen on the screen …. [T]he effect of the unbroken flow of images (experimented with in the past by directors like Hitchcock and Max Ophüls) is uncanny. If cinema is sometimes dreamlike, then every edit is an awakening. Russian Ark spins a daydream made of centuries.”  Russian Ark won numerous awards at film festivals and other artsy-fartsy places. Because OMG the pretension level is off the hook! And I’ve spent most of my life as a seriously pretentious art-fag, so I should know. I just spent the whole 96 minutes wondering who the hell slipped something in my drink. This movie goes beyond merely artsy into realms of fantastical drugged-up historical dream sequence with no rhyme nor reason. 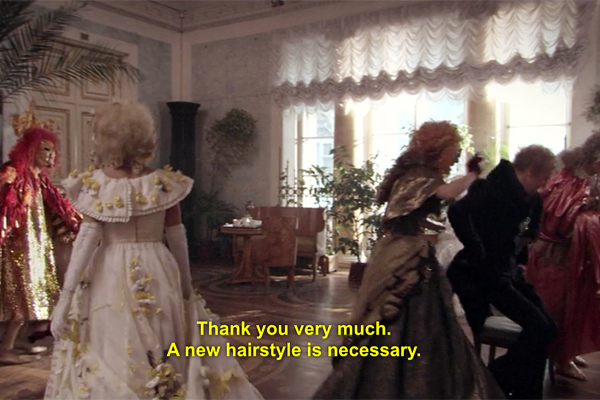 But don’t trust these carnevale crazies to do your hair.

The viewer is following a guy, “the European,” around the Winter Palace of the Russian State Hermitage Museum in one never-ending Steadicam shot. So it feels like you are wandering around the palace/museum, which seems like a great idea, right? And at first, it kind of looks like you’re in an earlier period, sometime in the 19th century, judging by the costumes. The first people you see are wearing vaguely Victorian gowns with exaggerated hairstyles that made me think of the 1830s. But that European guy is in stylized but basically modern clothes, so it’s unclear what era you’re really in. And it changes up every few scenes. 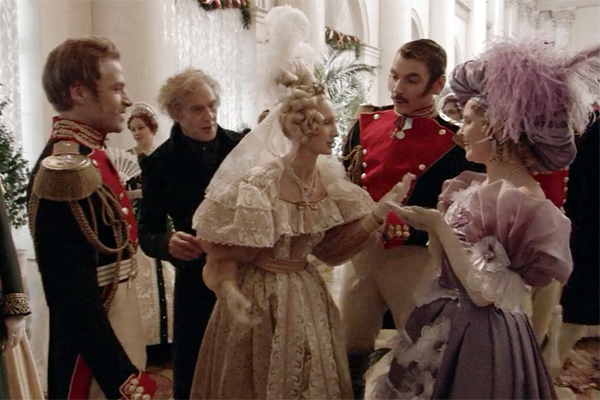 You follow these two couples from the beginning & end up at the grand ball with them at the end. Why? Because art?

The camera keeps moving, and you’re backstage at a performance being held for — wait for it — Catherine the Great. Who really needs to pee, she exclaims. So you’re in the 18th century? The costumes are not exactly period, and the wigs are that bright white fakey style. But don’t worry, you’ll leave that era fast enough (if you were ever really in it; don’t ask me, it’s the drugs talking). 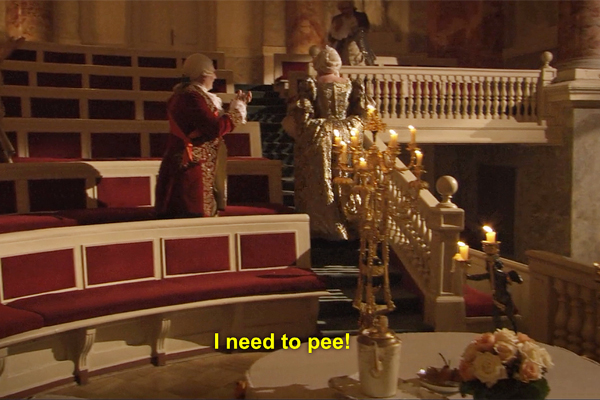 “I am the Empress and Autocrat of All the Russias! Where the hell is my chamber pot?” 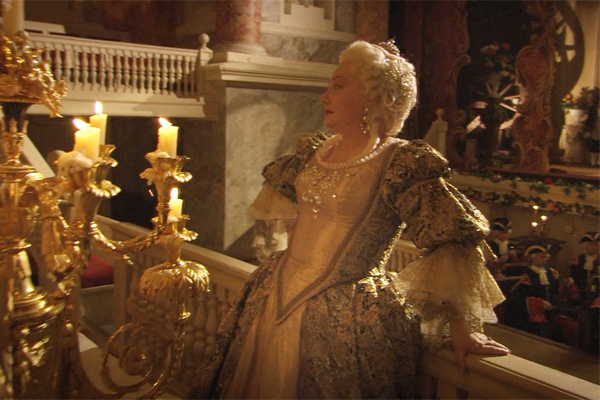 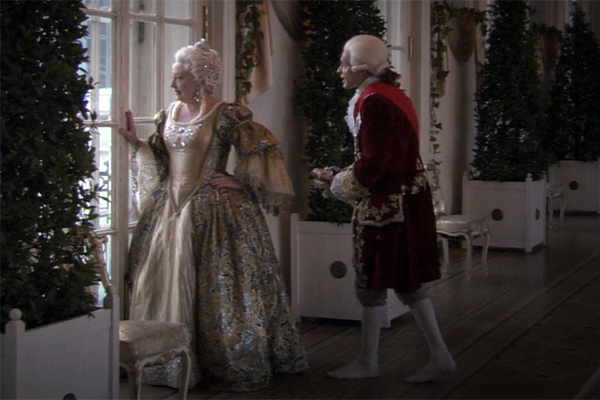 I have no idea why her courtier is running around in stocking feet, carrying his shoes. But I’m sure that’s an important plot point that would have helped my understanding of this film. Right?

You / the narrator / the cameraman and the European roam around the museum part of the Hermitage A LOT, including the modern part with 21st-century tourists looking at the art. The European talks with some old dudes about art and says they smell like formaldehyde (he’s really into smells — is he on drugs?). You all make a little detour for the European to try and get some action with a blind chick off in one of the palace’s galleries. No idea what’s going on, but it takes about 20 minutes of the film wandering around there, including getting lost in some storage rooms. 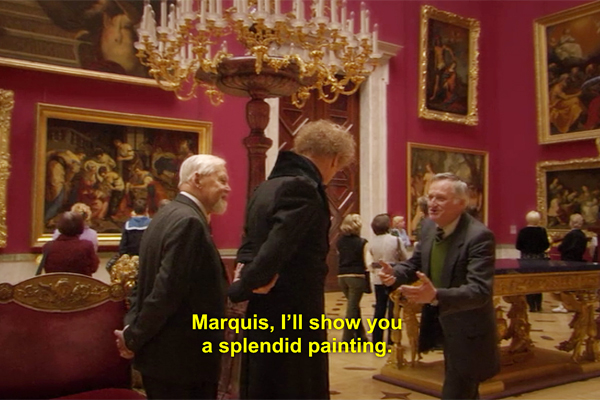 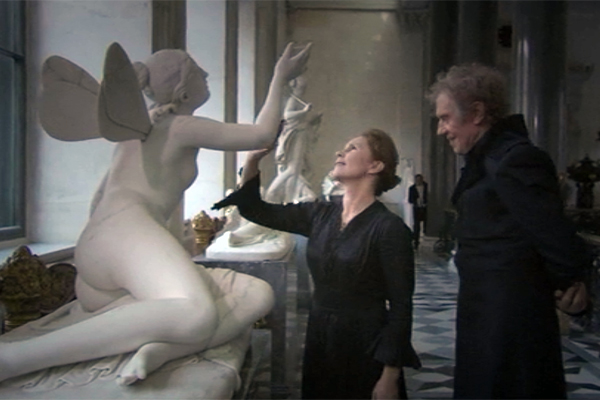 Opening random doors leads to watching a super-formal military/court ceremony and the preparations for a giant fancy dinner using Serves china. The European is totally impressed by that, but we don’t get a closeup, so it could be crap for all I know. Then you follow some dancing girls dressed like fairies (no lie) who lead you to Tsar Nicholas II and the fam having breakfast (hush, no spoilers about the Bolsheviks!). 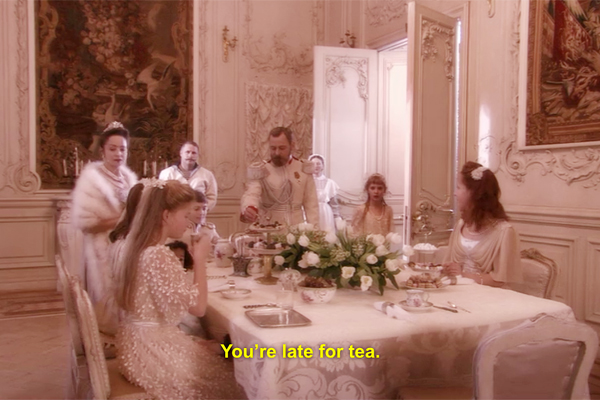 This might have been the only scene that made sense, except it lasted for about 10 seconds.

Finally the movie ends up at what is supposed to be Tsar Nicholas’ last grand ball at the palace circa 1913. Except the costumes are all the ones we’ve seen throughout the movie, which are a mishmash of 1820s through 1890s plus a lot of prom dresses fancied up with more feathers and ruffles. Historical accuracy is not this film’s strong suit; tripped-out historical-style fantasy is where it’s at. An orchestra plays, costumed figures dance, it goes on and on, the scene is lovely though, to me, it looked like nice footage from a particularly nifty costume ball I might have been to at some point (maybe it’s the drugs again?). I mean, I like a dance scene in historical costume movies as much as the next person, but this thing goes on. And on. And on. This ball is in real-time. 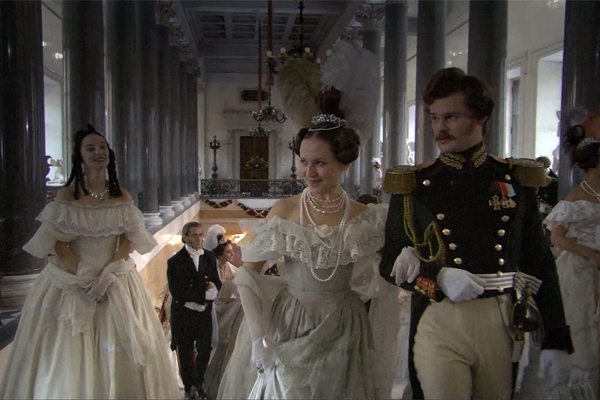 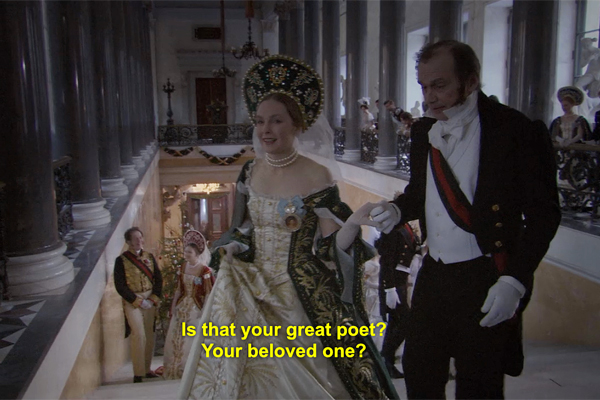 They’re referring to Pushkin, so maybe this is the 1830s? 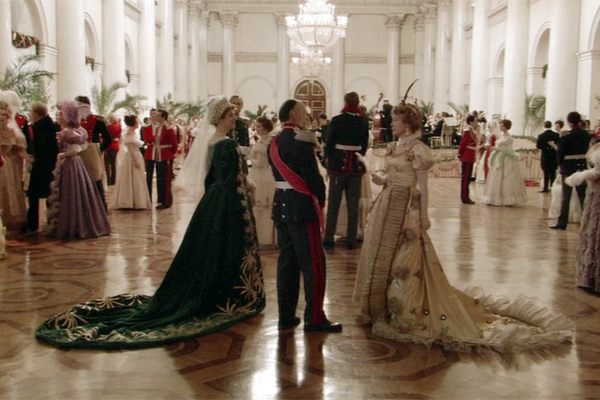 But here’s the ball everyone’s walking into, & the theme is apparently “formal wear of the 19th century with bonus Russian bits.” 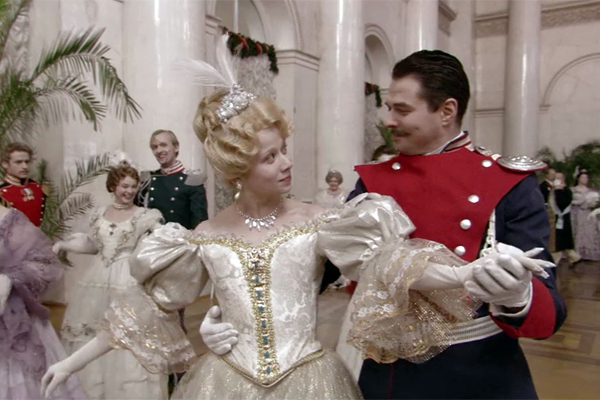 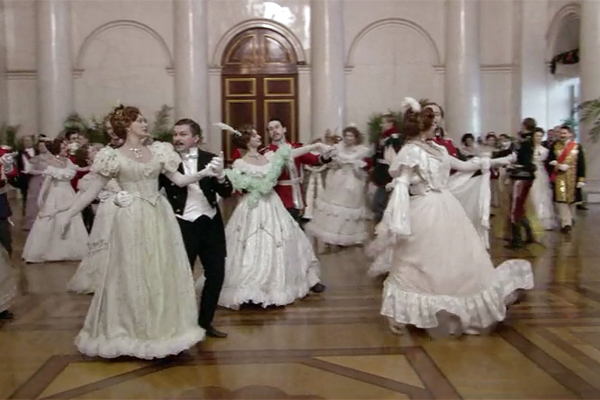 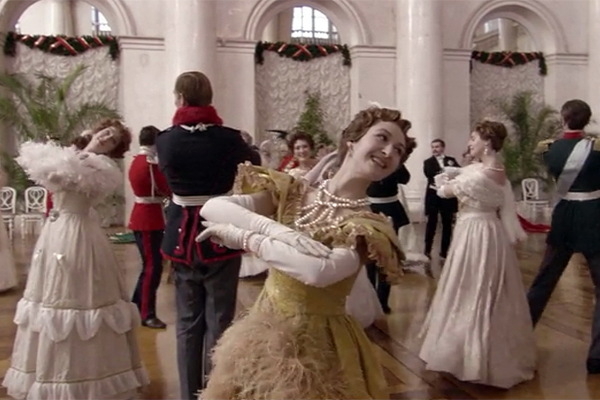 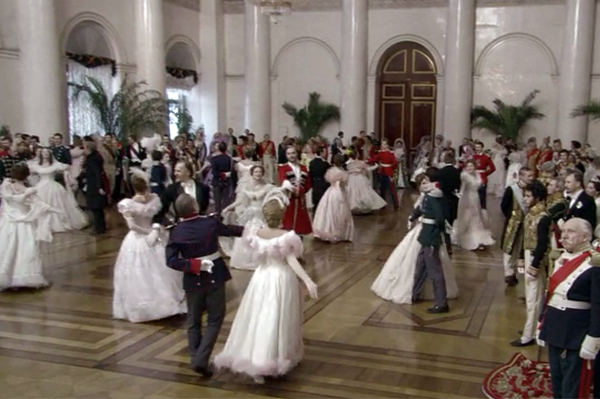 If I was there, I probably would have had a good time. But watching it is a bit like watching unedited home movies. 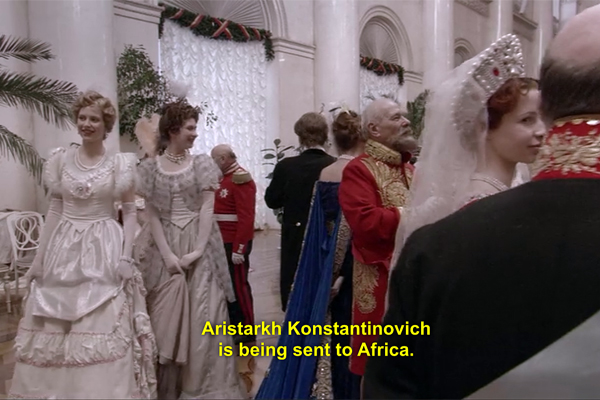 WTFrock is going on with those gowns on the left? 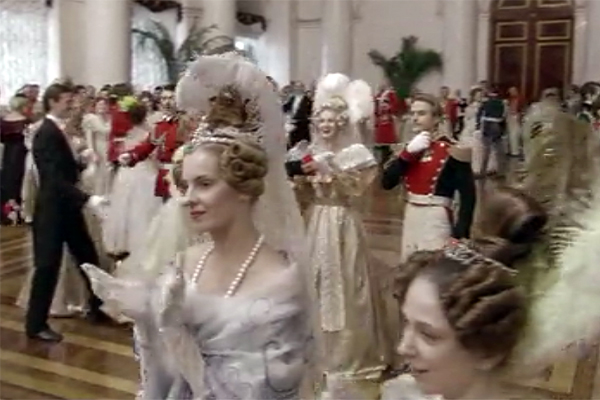 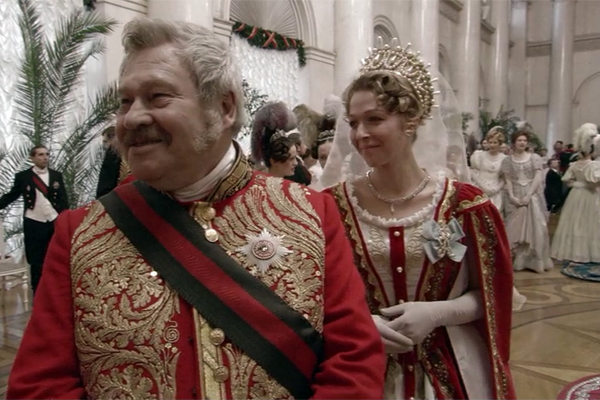 And then everyone leaves. And you’re watching them leave or, rather, you’re walking with the massive crowd, down the massive staircase, as everyone slowly walks out. Also in real-time. You’re walking. Just walking. WTF movie? What just happened? I don’t get it! 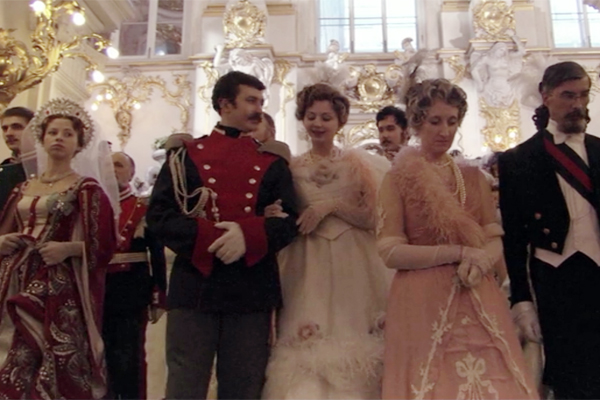 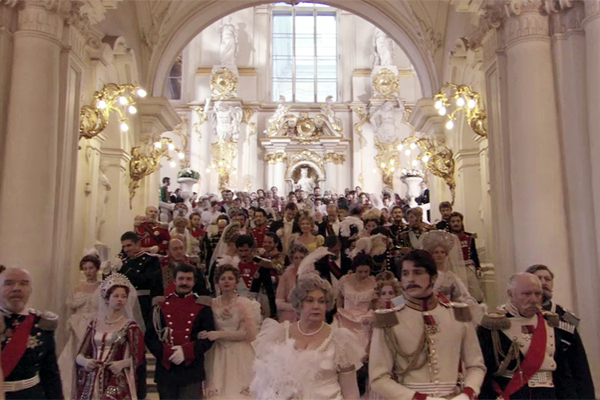 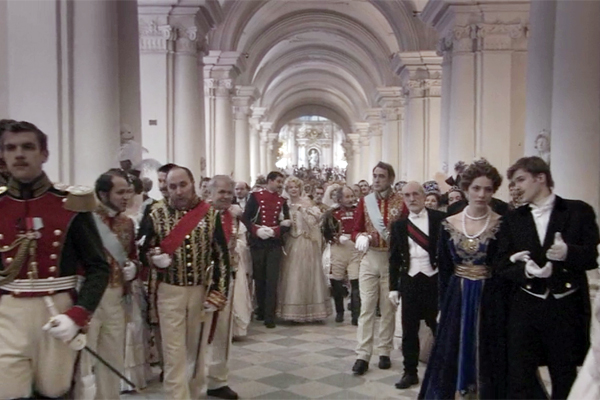 Russian Ark isn’t the worst way to spend an hour or two. The fact that this is the longest uninterrupted shot in film history is pretty cool. But if you’re looking for plot or dialog or a consistent time period, nope, not gonna get that. Consider this one giant historical costume Russian fantasy drug trip, and you’re good to go!