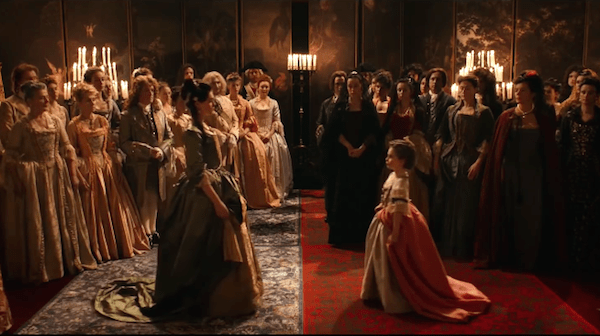 The Royal Exchange (L’echange des princesses) is a 2017 French film that’s based on a novel by Chantal Thomas (author of the source material for Farewell My Queen). It’s about early 18th-century royal marriage matchmaking: set in 1721-1725, it tells the real story of Mariana Victoria of Spain, who was engaged to French King Louis XV; and Louise Elisabeth d’Orléans, daughter of the French regent who was married to Spanish King Louis I. As there are no spoilers in history, I’ll tell you: Mariana was only 4 (or 3?) years old, sent to France, and eventually returned to Spain as the French didn’t want to wait to marry off Louis XV. Meanwhile, Louise was 11. Her husband ascended the throne about three years later, but died shortly thereafter of smallpox; Louise was sent back to France.

Holy crap, a super interesting real-life story that hasn’t made it to film yet — I’m pleasantly surprised and will watch the shit out of this movie when it finally makes it to the states! (It was released in late December in France, but hasn’t yet made it’s way elsewhere).

There’s a (subtitled) trailer and a series of three clips (only in French) to whet your appetite:

I’m a little irritated that they’ve cast actresses who are too old for their parts — Anamaria Vartolomei (Louise, who should be 11 to 15) was about 18 during filming, and Juliane Lepoureau (Mariana, who should be 3 or 4 to 7 or 8) was about 9. Of course, seeing a 9-year-old in any way considered marriageable is crazy, but not as crazy as her real age; and Louise seeming to be in her late teens definitely undercuts the age factor in that story! On the other hand, yeah, it would probably be hard to find someone in the 3 to 4-ish age range who could carry the part.

Costumes in The Royal Exchange

The designer is Fabio Perrone, an Italian designer who has done a number of historical films that are either French or I haven’t heard of them, including Young Blades (2001), Paradise Found (2003), and Black Venus (2010). Before that, he worked under Caroline de Vivaise, who designed a number of historical films, including The Princess of Montpensier and The Cat’s Meow.

Of course, the budget was limited (in an interview, the director said that the budget was 7 million euros, but he knew the film would only work if the costumes were realistic and well done). According to an interview with the designer, this was the first time he used online sources (Instagram, Pinterest) for his work. He did research at museums including the Louvre and Prado, and spent six months preparing the costumes.

Let’s take a look at what we can see so far! In general, I think they’ve done a nice job with a limited budget. Basically, I’m seeing the proverbial “general 18th century” mishmash without some of the important elements that would make these costumes 1720s-specific. On the other hand, there are some things they did really well!

Basically, you should see four basic styles of women’s dress (at least for French dress; I don’t know enough about Spanish dress in this era to comment intelligently).

First, you have formal court dress. This was based on late 17th-century gowns, and consists of a fitted, boned bodice with rounded neckline that hits on the shoulder point (not above, not below); elbow-length sleeves that often featured rows of gathered lace; wide skirt over hoops, which were recently introduced and transitioning from rounded to side emphasis; and an overskirt that is pulled back on the hips and extends into a long train. Read more in my rant about back-lacing in the 18th century. 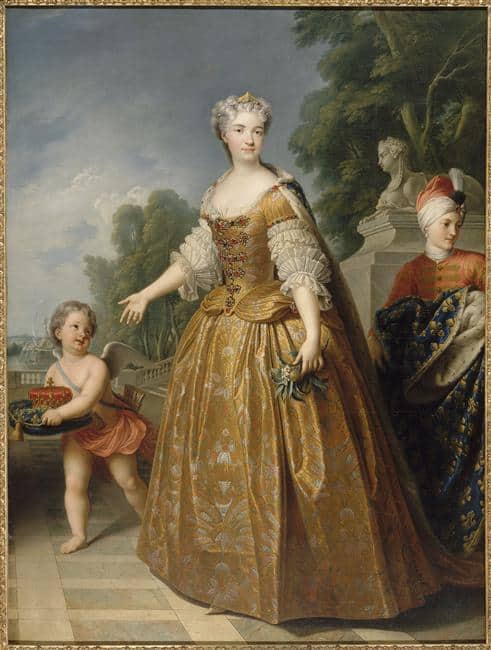 Some of what I think is court dress is great! Check out how ca-UTE Lepoureau/Mariana is in her formal robe de cour! 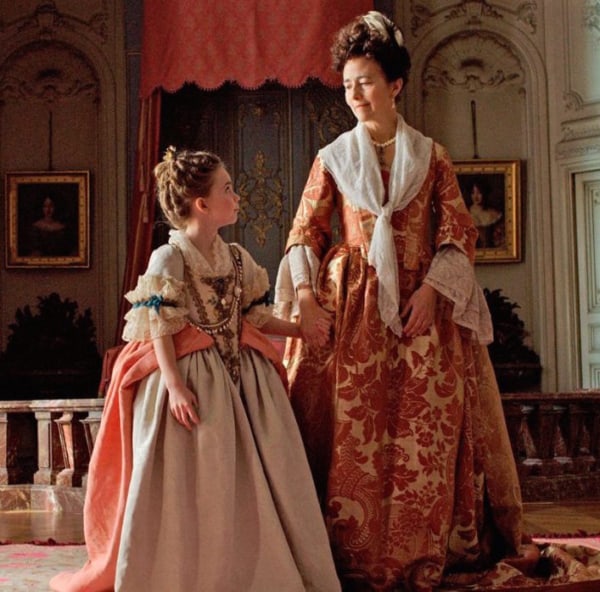 Looking at Mariana on the left, yep, she looks great! LOVE the hair!

And then they’ve got a scene of Mariana and Louis being painted for a portrait: 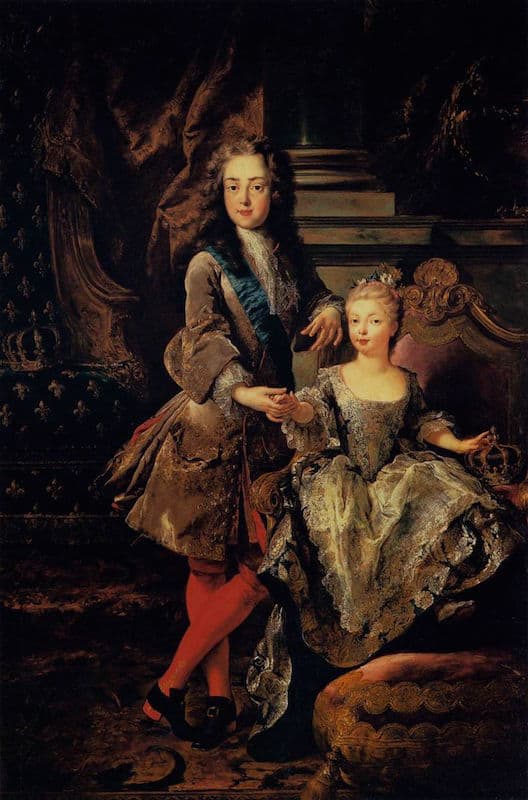 Portrait of Louis XV of France with his “fiancée” Mariana Victoria of Spain by François de Troy, 1723, Pitti Palace

On the other hand, I’m not sure what Louise is wearing: 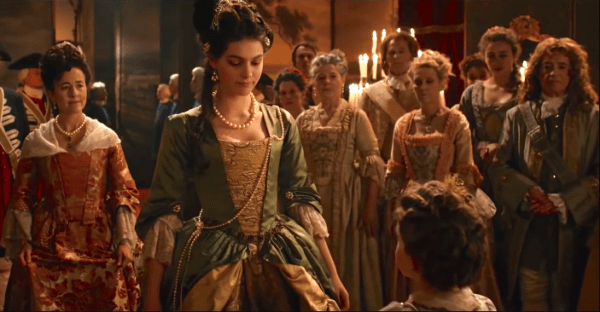 The stomacher is all wrong, as is the neckline. 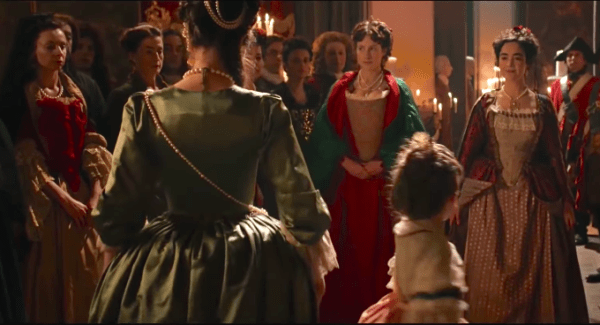 And, shockingly, it SHOULD be laced closed in back!

The next style is a holdover of the late 17th-century fitted gowns. Often it has a jacket with a short skirting. I’m including a bunch of examples because it’s a style you don’t see represented very much today: 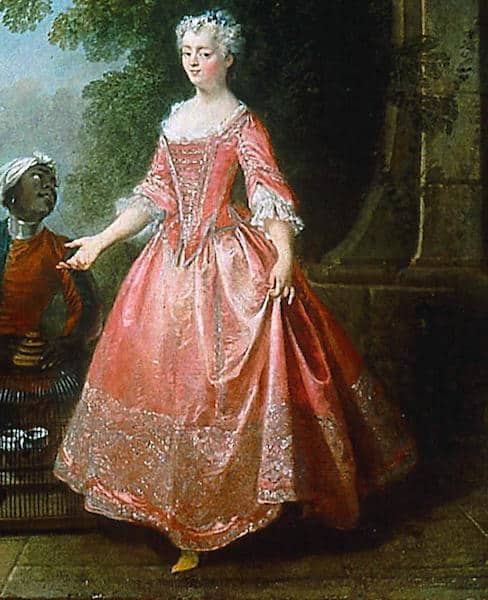 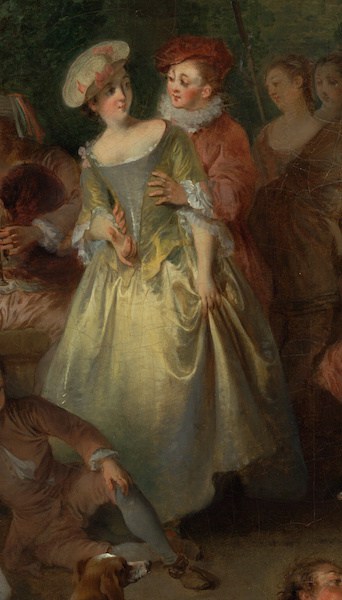 Dance before a Fountain by Nicolas Lancret, c. 1724, Getty Center 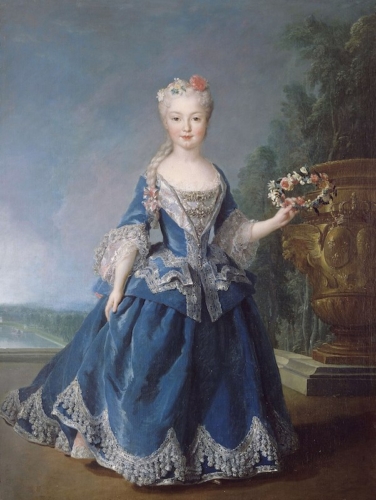 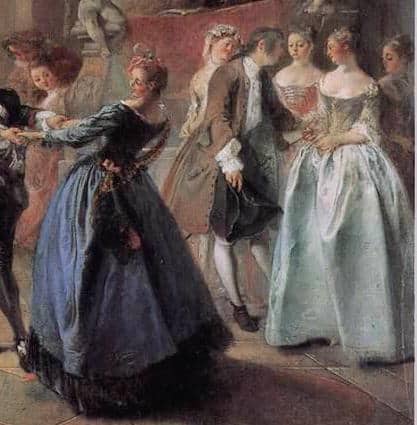 Dance in a Pavilion by Nicolas Lancret, 1730-5, Charlottenburg Palace

Is that what these are supposed to be? 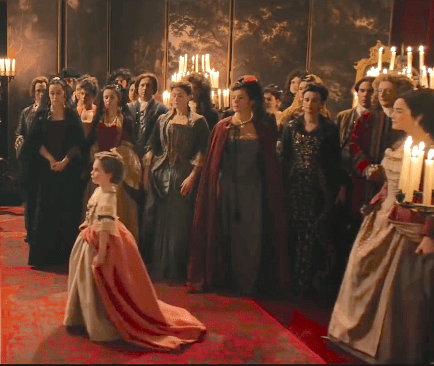 The ladies in the background, I mean. These are the Spanish. 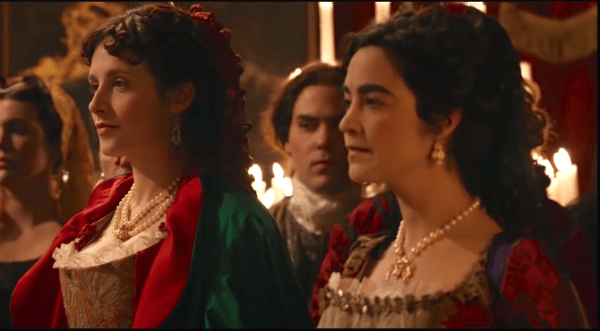 The third main style of this era is the robe volante or robe battante, which was the precursor of the robe à la française/sack-back style. It looks like a super loose version of the française, with wide pleats in front and back. Read more in my rant about back-lacing in the 18th century. 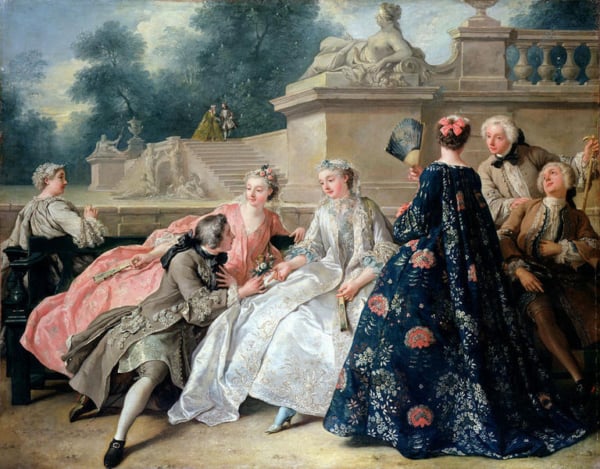 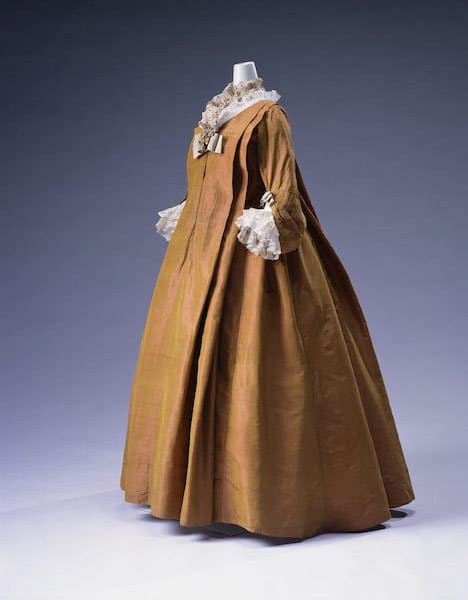 You don’t see a WHIFF of the robe volante in the film, and that’s a BIG miss. I can see why — to modern audiences it would just look like a whole lot of muumuu. But it’s the key style for this era.

Style #4: Hybrid Between the Manteau and Robe Volante

Don’t ask me what the hell to call it, but in art of the period you see gowns that basically look like slightly more fitted/formalized versions of the manteau, which was essentially a dressing gown worn open in front with a sash that turned into an actual dress (Read more in my rant about back-lacing in the 18th century). They look like more fitted versions of the robe volante, and so I think show the transition from manteau to robe à la française: 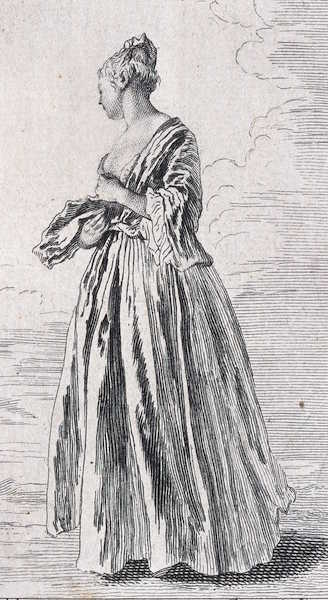 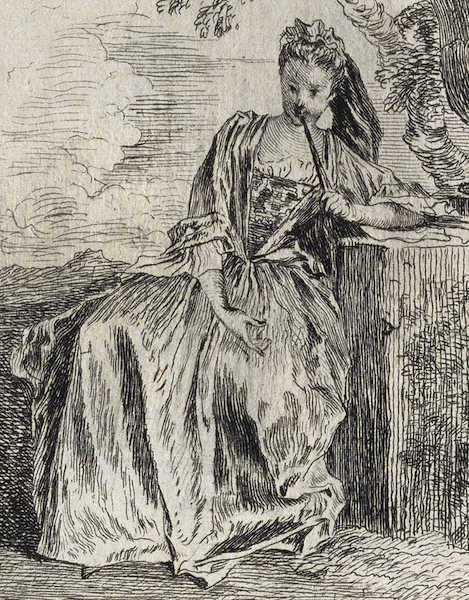 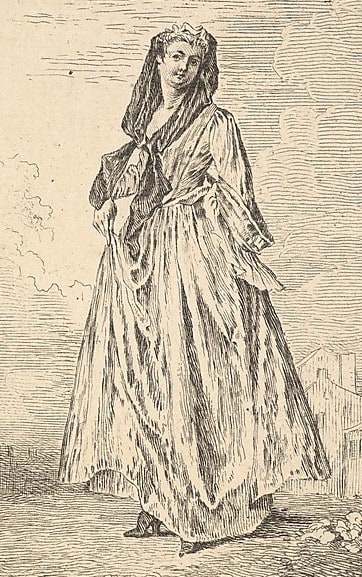 I guess if I think charitably, all of these dresses might fit into this category, but they look like mid-century robes à la française (or English nightgowns) to me: 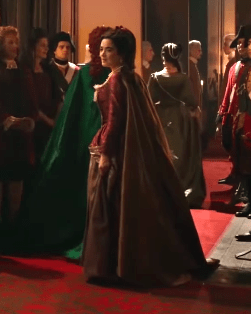 Is that a cape or part of the dress? 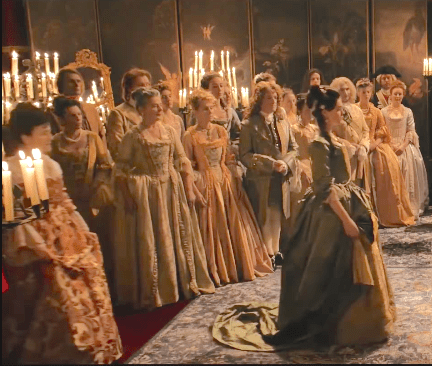 All those dresses are too fitted and structured to suit the 1720s. Try 1740s. 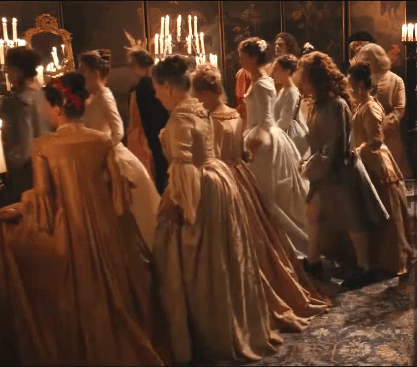 Nice wide pleats on the lady on the left, but otherwise all those fitted backs are all wrong. Also, no engageantes (sleeve ruffles) yet as worn on the left-hand lady.

This lady-in-waiting’s dress is a straight-up 1740s-50s robe à la française. Which didn’t yet exist. 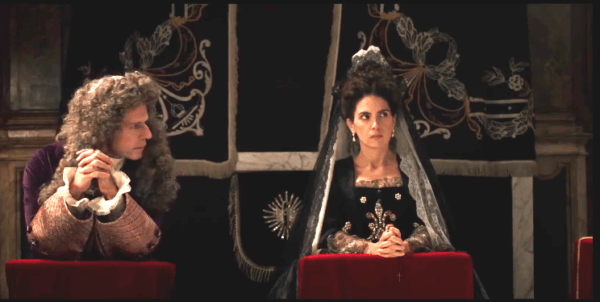 Are we in Spain here? Not sure. 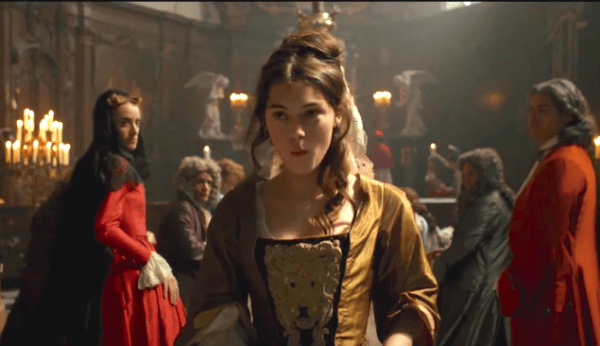 oooo that’s clunky and not in a good way.

Women’s riding habits were very much based on menswear styles, although worn with skirts: 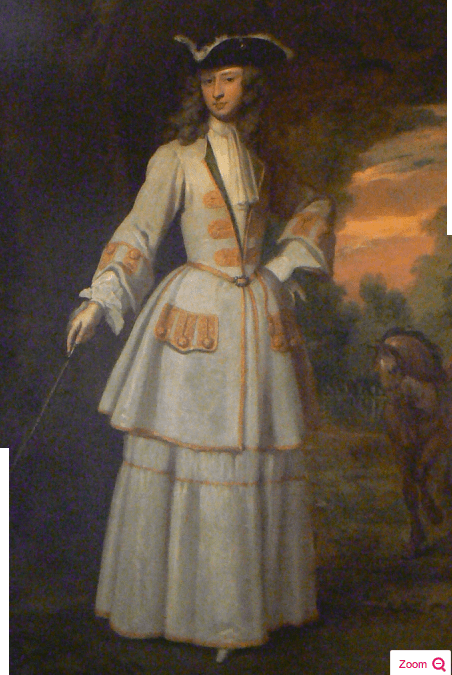 Henrietta Cavendish, Lady Huntingtower by Godfrey Kneller, 1715, National Trust (UK). Ok, so it’s English, but it’s very similar to what was worn in France too. 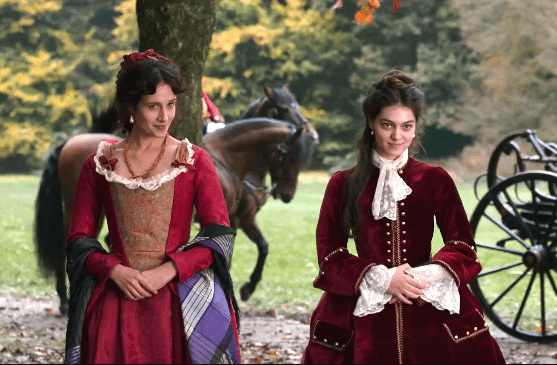 LOVE THIS RIDING HABIT. Not commenting on lady on the left, with her front opening/stomacher gown…

…with inappropriate back lacing. Also, wtf with the ball fringe snood?

Looks like you’ve got older characters with higher hair and veils that are reminiscent of the fontage headdress, popular in the 1690s-1700s: 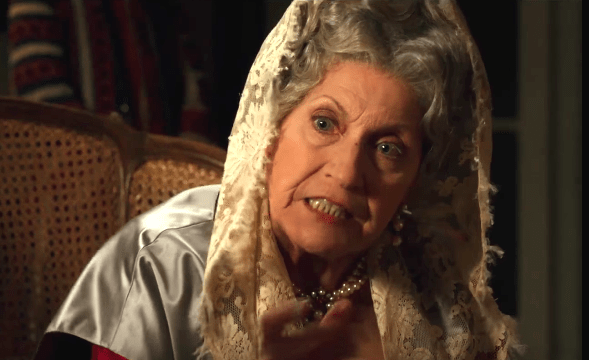 Fine? I wish there was a bit more fabric in the coats, as this was a VERY full-skirted era for men’s jackets.

For comparison: check out how full the below-the-waist portion of these jackets is: 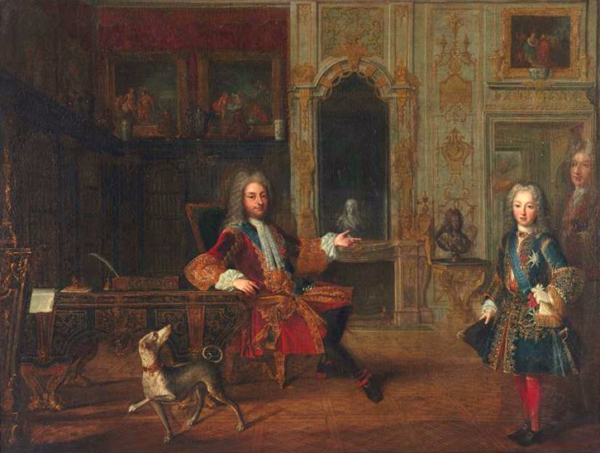 And then in the film: 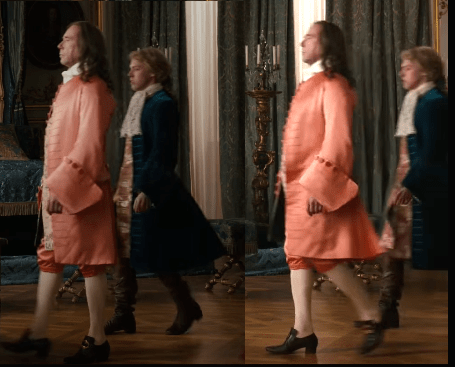 Also, most of the wigs look good — although there’s a lot of tousled, un-wigged hair throughout! No one ever owned a comb, historically! Side note, EVERYONE’S hair should be powdered up the wazoo, at least the French for formal occasions. 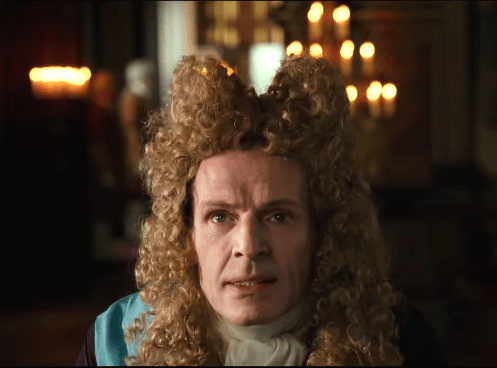 What’s your thoughts on The Royal Exchange?