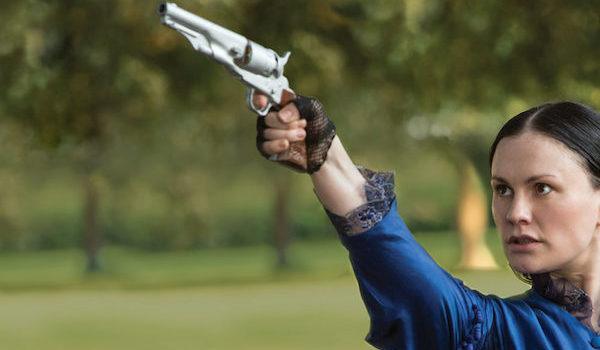 Sorry, kids, I got distracted from my episode by episode review of the new, rebooted Roots (2016)! But I really should talk about episode 4, just to be completionist. Sadly there is no Gallery of Shittily Dressed Extras or anything else excessively fun to snark, which tempers my enthusiasm…

In this final episode, a number of years have passed. Chicken George has spent all this time in England. He’s finally able to purchase his freedom and he returns to the South to track down his family. Cue racist dirtbags, the Civil War, and the end of slavery. Throw in some family reconciliation and a bit of spying, and you’ve got your episode! 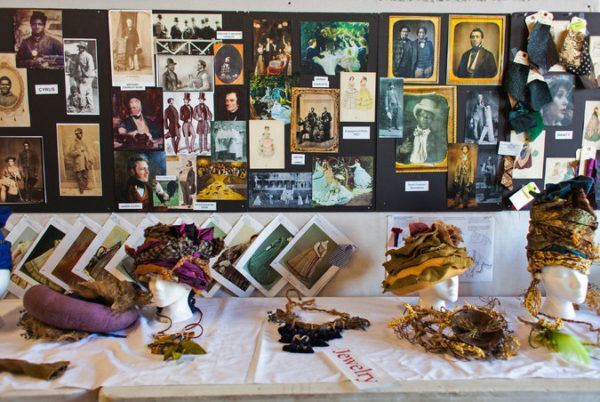 The costume designer’s inspiration board. 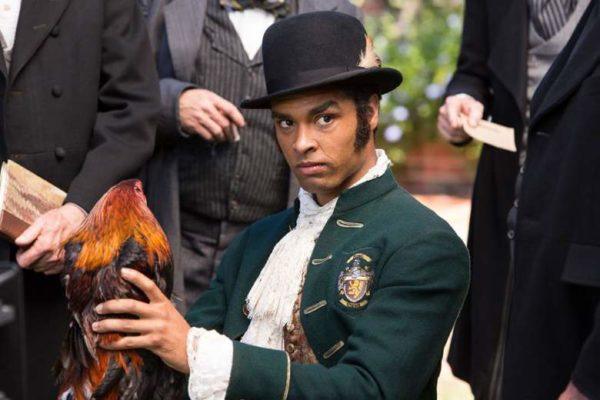 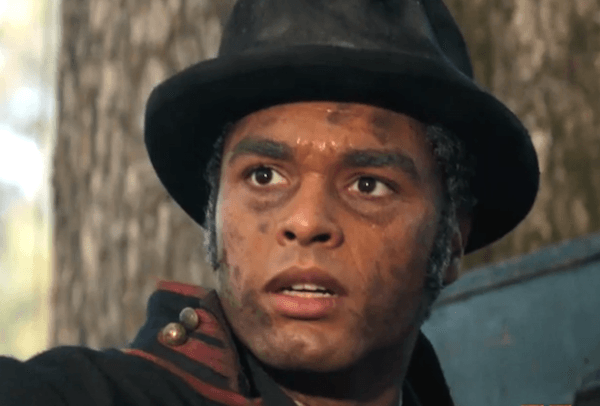 See what I mean? Not the greatest character makeup ever. 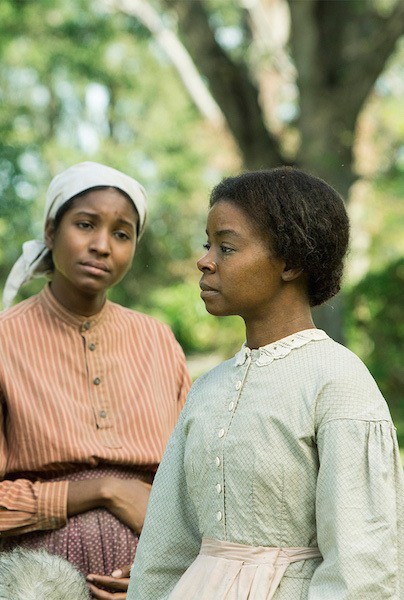 Back in the States, George’s wife Matilda (right) is a quite well dressed house slave (her daughter-in-law, left, is lower down the social scale). The scenes showing Matilda and George’s reunion were really touching. 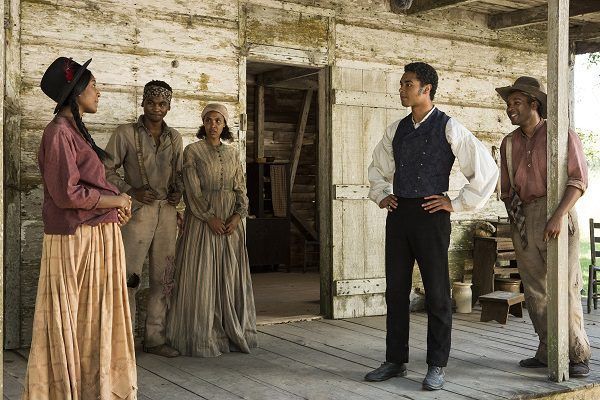 Most of George’s family are field slaves. They did a wonderful job showing how hard it would be to reconnect with your children after so many years away. 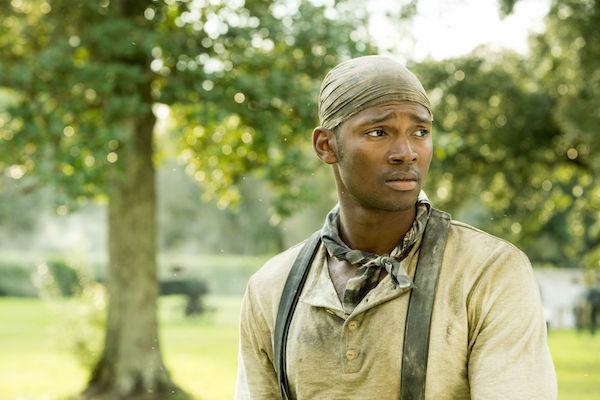 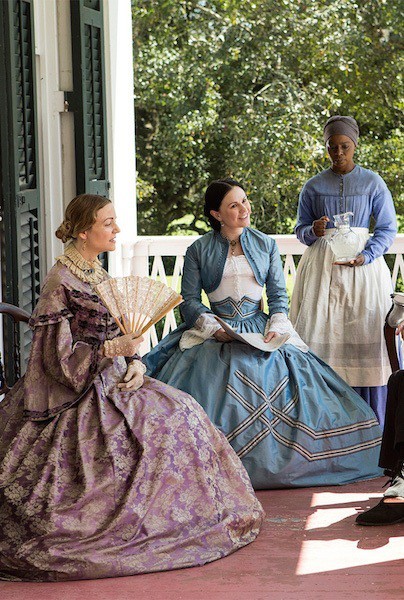 Anna Paquin plays Nancy Holt, the fiancee of the owner’s son (I think that’s the owner’s wife on the left). They did a very nice job with the upper-class white women’s wardrobes. I feel like Paquin’s top and sleeves are a bit TOO fitted for the era, but otherwise, I like the Zouave (bolero) jacket and Swiss waist, and lady-on-the-left looks pretty great (minus the Battenberg lace fan from Oriental Trading Co.). 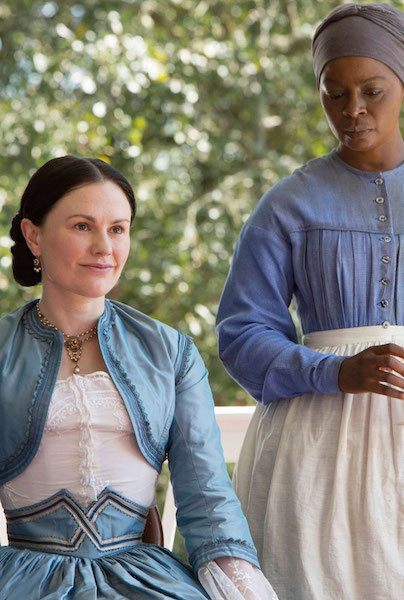 Paquin’s hair is a great silhouette for the era, and I like the trim on this ensemble. Again, note how tight her “blouse” is … I’ve never seen that in the period! I’m guessing it’s to avoid the whole overly puffy 1860s silhouette, which, hey, I don’t love either. 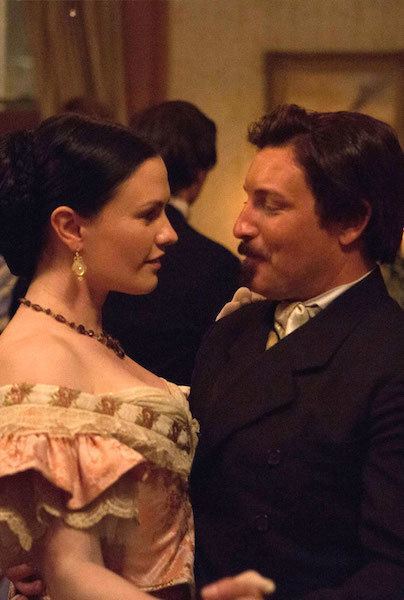 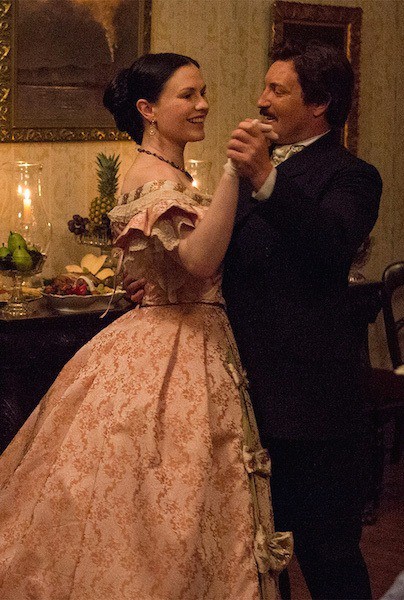 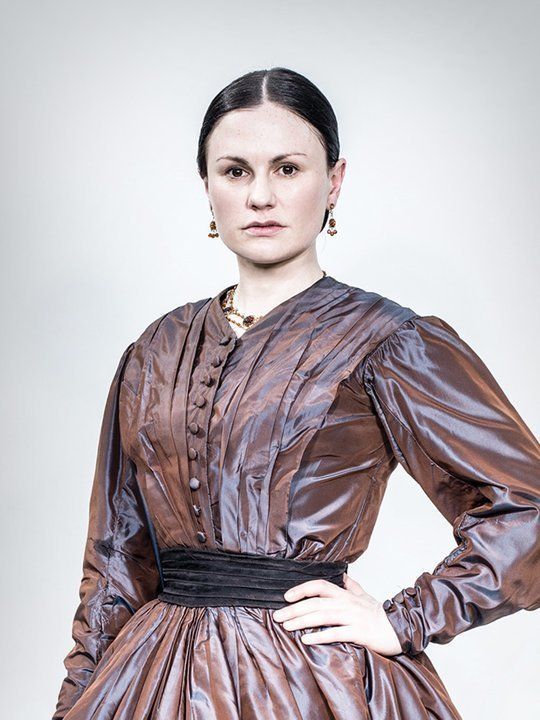 This dress totally reminds me of Charlotte Bronte’s going-away-dress. The changeable taffeta is perfect for the era, as is the pleated bodice and coat sleeve. 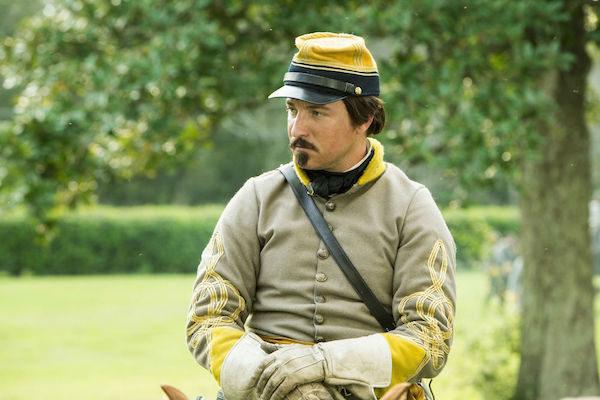 The extra-racist owner’s son is only too happy to join the Confederate Army. He’s almost a caricature of an evil racist, except there absolutely were such people and why sugarcoat things? 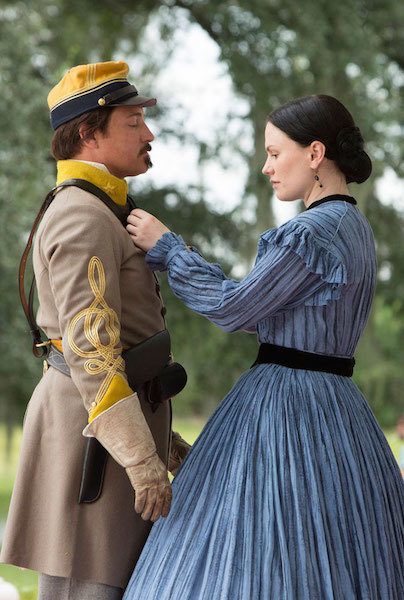 Paquin’s cotton dress seems like a good choice for summer in the South. I like that the fabric is really lightweight. 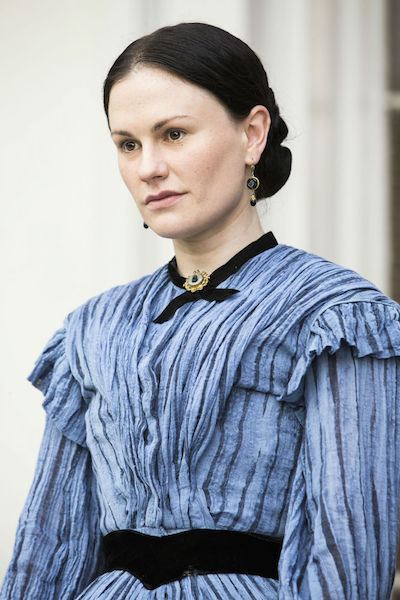 Nice accessories, too, including the earrings, velvet ribbon with brooch, and velvet sash. 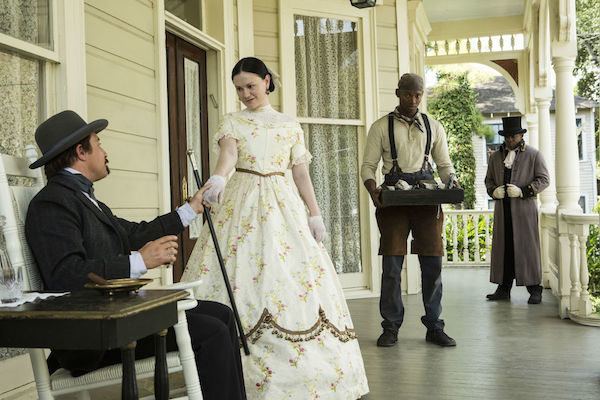 Okay, so this is the dress that confuses. While I like the contrast of the darker trim, it’s kind of clunky. But it’s the sleeves and chemisette/neckline fill-in that are really weird… 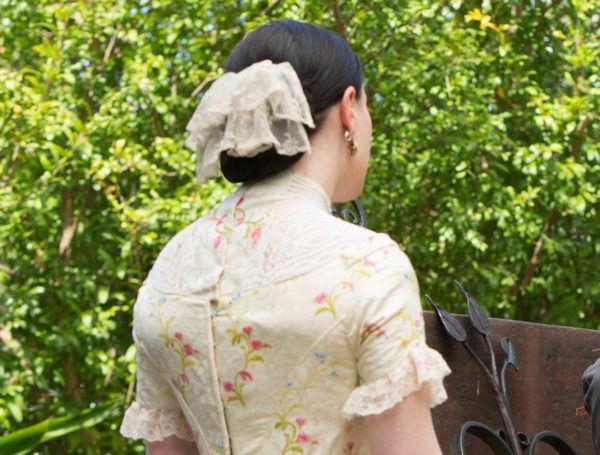 That tight short sleeve seems wrong for the era, and the chemisette/guimpe (lace fill in) is weird in that it has pieces of the dress fabric in back – why? I’d like it better if it were all lace.

I pinged my friend Bridget Bradley-Scaife, who knows a ton more than I ever would want to about US Civil War era women’s costuming, and here’s what she said about this dress:

Yes, they did have short sleeves. Often used on sheer dresses with low necks or jewel-neck dresses. Often worn by younger women and girls. The high collar is strange with this style of dress. Also a back-opening dress indicates a young girl or teen, not a woman. Back openings are for children’s dress in this era except for formal wear. The trim is a bit heavy for this style of gown … Truthfully it looks more like a 1840s style dress than a 1860s. Maybe not, just looked at the seam lines … was thinking that because of the back-opening which you do see in the 1840s.

Bridget sent me a bunch of images of what this style of gown should look like in the 1860s: 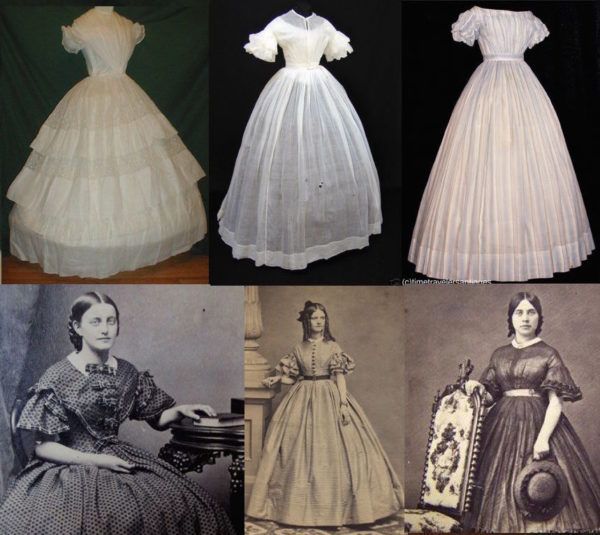 Finally Bridget says that the below image is the “Closest thing I found to the one on the show but is probably late 1840s/early 1850s”: 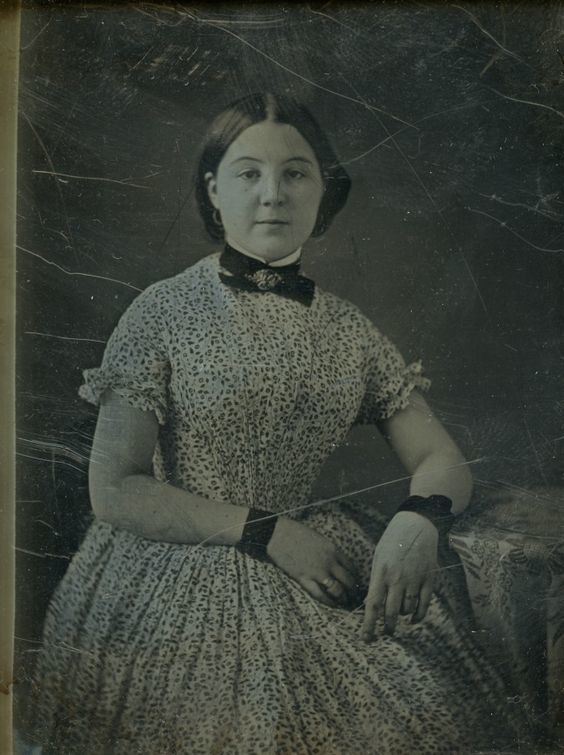 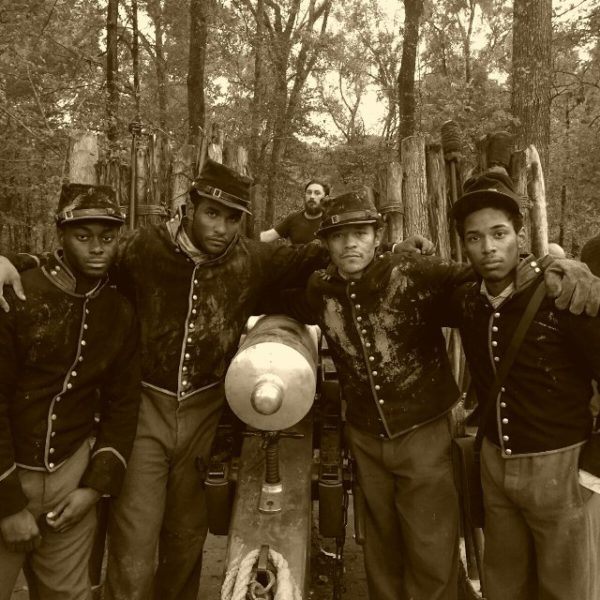 George joins the Union Army, although the focus is mostly on how the African American soldiers weren’t armed and how frustrating that would have been. 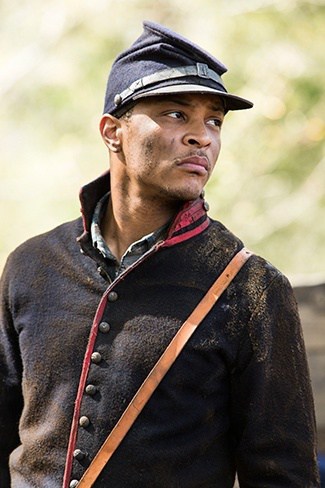 George befriends a fellow soldier while in the Army. I can’t comment on the uniforms, because I know nothing. 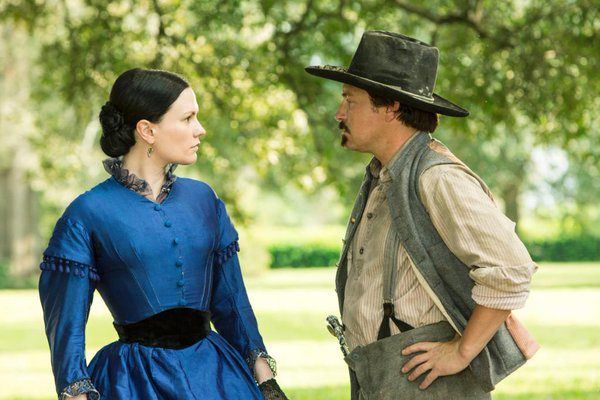 Paquin’s final dress. I like the hint of a V neck, and although the sleeves seem a little short, I love everything else about this ensemble. 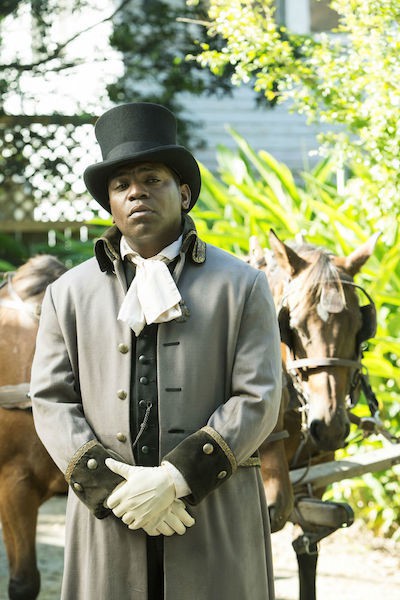 And, that’s it for me and Roots!

Have you watched the 2016 Roots yet? What did you think of the last episode, and that short-sleeved dress?