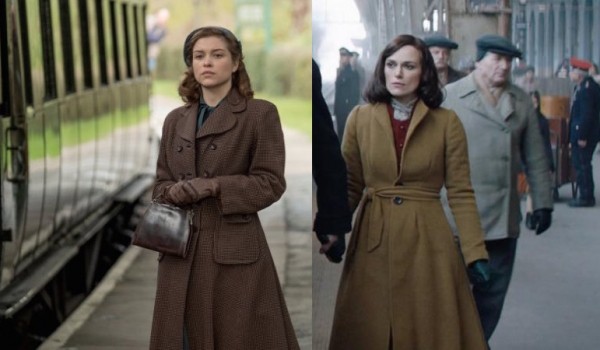 Red Joan stars a mostly-wasted Judi Dench as a woman who, back in the 1940s (her younger self played by Sophie Cookson), spied for the Russians. It’s a lot more complicated than that — Joan was a naive physics student at Cambridge who fell in with communists, one of whom she falls in love with (Tom Hughes of Victoria and Dancing on the Edge). Side note, MEN ARE BASTARDS (yes, #notallmen). These friends create the connections, but she actually has moral reasons for doing what she does … which I don’t want to give away! Although Dench doesn’t get to do much with her modern-day framing, the story is interesting (it’s LOOSELY based on a true story! Google it!), the acting is well done, and the costumes are very nice.

I had to watch The Aftermath after reading Emily Writes’ review, in which she extolls of the virtues of a sex cabin in the woods. Dude, eff the sex cabin, let’s talk HOT TABLE SEX. Ahem. Keira Knightley is an Englishwoman who moves to just-barely-postwar Germany to join her husband, who is involved in de-nazification efforts and reconstruction. They share a home with a German widower (Alexander Skarsgård of The Legend of Tarzan, and if you haven’t read Emily Writes’ review of this film, GO READ IT NOW but be prepared to CACKLE [the V! the V!]). All is not well in Keira’s character’s marriage, and when she starts to get close to Skarsgård’s … well, let’s just say:

What’s less successful is their attempt to show the war’s effects on Germany. Actually, the shots of a completely-destroyed Hamburg are VERY moving, but the subplot involving some hardcore nazis plays out weirdly (I feel like some key stuff got lost on the editing room floor).

Now, let’s look at the costumes!

The costume designer was Charlotte Walter, who has done good things with I Capture the Castle, Easy Virtue, and The Guernsey Literary and Potato Peel Pie Society, among others.

According to the film’s production notes, Walter wanted a “relatively pared-back approach” and it shows — the costumes are effortlessly natural, the kinds of everyday things real people would and did wear in the 1940s. Even the bits of glamour that pop up, mostly on Tereza Srbova as Sonya, are credible — no one is wearing designer gowns here.

“We very much wanted to make her still be feminine and her fitting into a man’s world, so first we played with more boyish outfits and it was like ‘No, I wanted to keep her very much a girl growing into a woman in a man’s field.’”

What I really liked was seeing time pass and Joan’s character mature on-screen. According to Walter:

“We start with young Joan in Cambridge, a rather naive girl with little blouses and skirts, straight out of school really. Then she gets work and that leads to her being more grown up … We started our fitting in the late nineteen thirties, a very young Joan” (production notes).

Where you really see this happen is with Joan’s hair, which starts off in short, tight pincurls that look very late-1930s, which then gets longer and more relaxed as the film progresses. The hair and makeup designer was Sallie Jaye (Loving Vincent, Gosford Park), and she focused on making the hairstyles look natural and realistic:

“I like to make it look authentic period. I wanted her hair to look like she’d done it herself. I got lots of reference pictures from students in Cambridge at that period. We changed her look as she gets older and becomes a woman, more experienced. We wanted her hair to look really natural but of the period, so we did a Lauren Bacall-style thing. Sophie let us cut and perm and colour her hair because she wanted to make it look exactly like the period” (production notes). 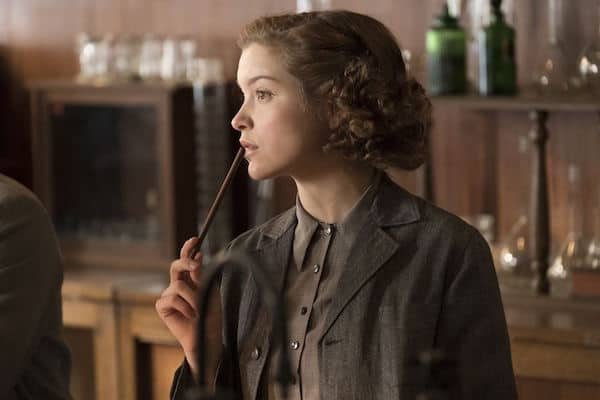 Which get longer and looser as the plot develops. 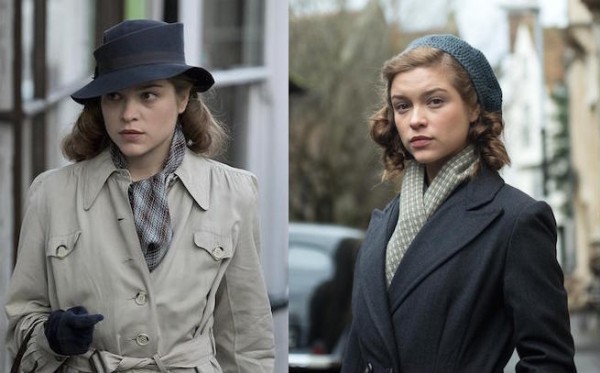 The costumes are incredibly realistic — they’re chic, but within reach of a real person.

Joan wears a lot of wartime-appropriate blouses with interesting tucks. 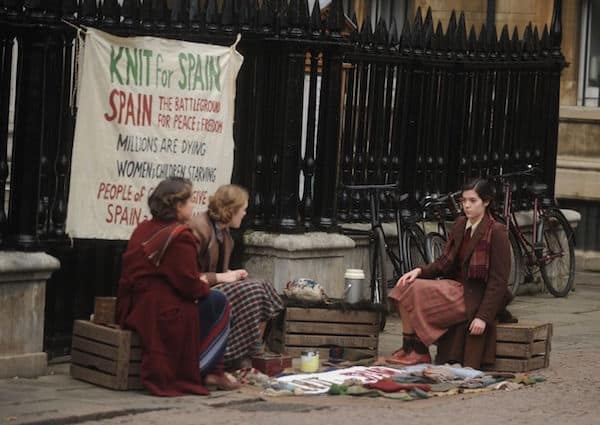 The knitwear is FAAAABULOUS, so it’s only appropriate that these girls are knitting for Spain (i.e., the Spanish Civil War) in the background of one scene. 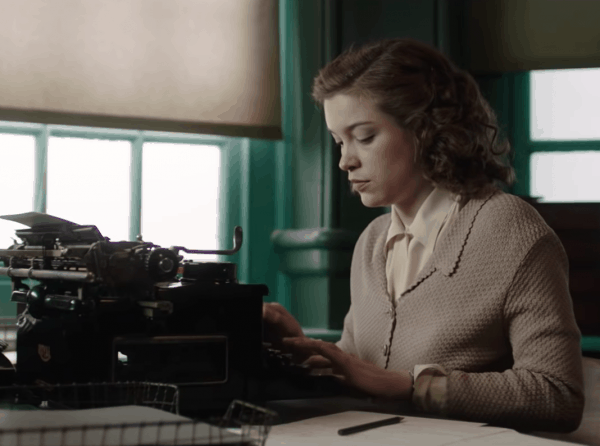 For example, this sweater…

But even more so, THIS SWEATER!!! 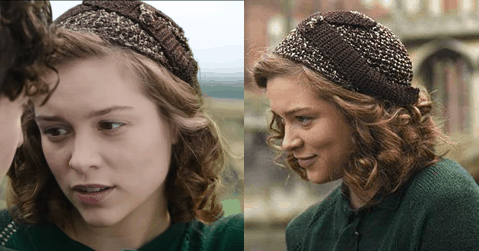 And if there isn’t already a pattern for this hat on Ravelry.com, I’ll be shocked. 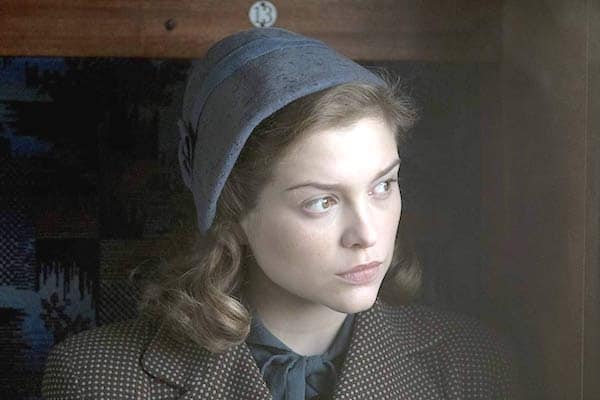 Joan wears all kinds of interesting headwear, including this almost-bonnet. 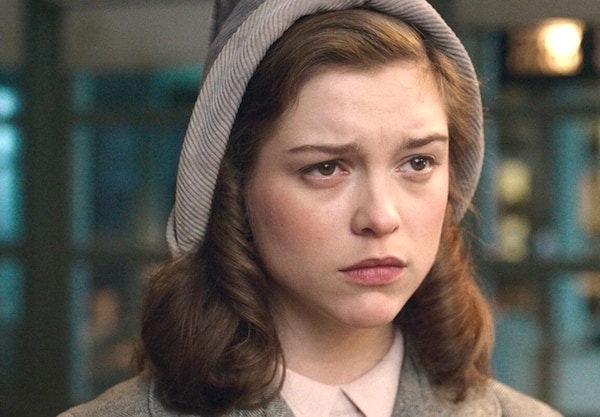 And this soft hood.

Even ultra-glam Sonya is achievably glam! 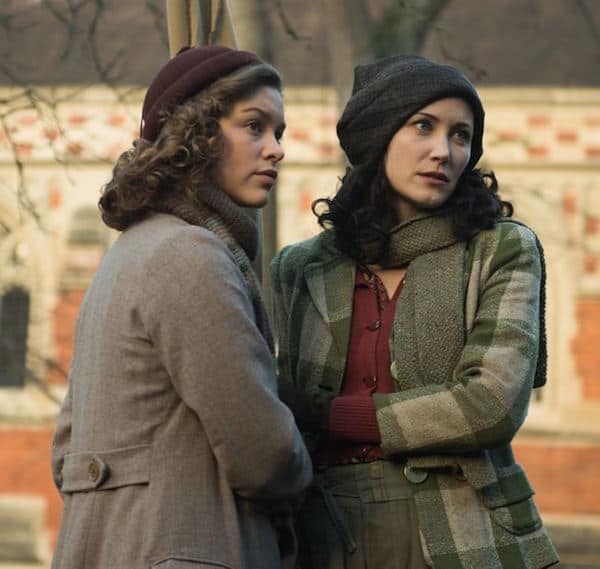 She also spends time in realistic outfits like this one. 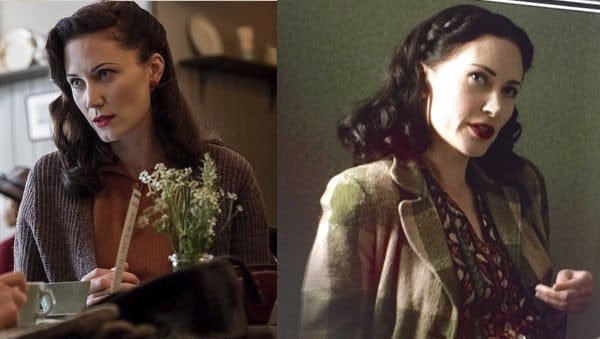 Mostly it’s all about touches like her hairstyle and fabulous lipstick. 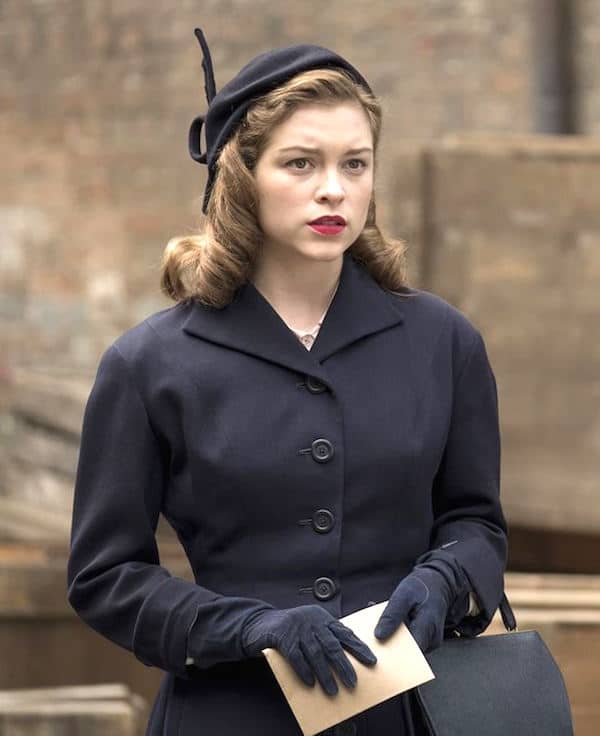 Near the end of the film, Joan wears this super elegant look — but again, it’s still REAL.

Costumes in The Aftermath

The Aftermath, on the other hand, is anything but realistic … luckily, the costumes are GORGEOUS, so I’ll let it slide. Apparently Knightley herself wanted to show the war’s effects through wardrobe, telling the Sydney Morning Herald that she “suggested she should have three threadbare dresses with visible patches,” but the costume designer — Serbian Bojana Nikitovic — told her “No, we’re not doing that.” Instead, Keira is GLAM GLAM GLAM — although most of that is daywear glam, so it’s not QUITE that insane. What’s funny is that the director, James Kent, claims he too wanted to keep the costumes realistic, according to the production notes:

“As a former documentary-maker, I didn’t want to over glamorize this world. It would be quite easy to make [German teenager] Freda look like a rather beautiful teenage girl, and Rachael [Knightley’s character] a far too made-up version of a middle-class English housewife. Keira was very keen on that, too—she wanted to feel real, bereaved and accessible to an audience.”

But that’s not at all what ended up on screen.

Unfortunately Nikitovic hasn’t done much (if any?) English language press. The only interview I was able to find was in Italian, so this is all badly Google translated. She did a ton of research:

“Despite all the things that happened, the bombings, the chaos that reigned in that period, there are still lots of documents, documentaries, cataloged books and historical artifacts preserved for decades. Real photos of that period where everything was completely destroyed. I was able to visit places where objects, fabrics and ruins of the period were kept, it was exciting. Thanks to this I was able to undertake a path that led me to the costumes made for La Conseguenza. Most were created in the studio, but some are original pieces, such as some uniforms and tights worn by Keira Knightley” (Bad Google translate version of La Conseguenza: quando è il vestito a parlare).

She focused on demonstrating:

“the difference between social classes. I am not speaking only of the poorer classes or those who were forced to live on the streets, but also the same difference that exists between the various military personnel and their wives, obviously based on the degree covered” (Bad Google translate version of La Conseguenza: quando è il vestito a parlare). 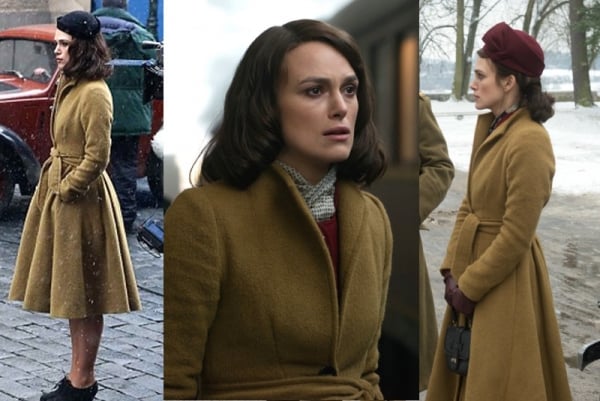 Keira’s character Rachael arrives in this GORGEOUS camel-colored coat with a flared skirt and standing collar. If knock-offs of this aren’t already available, I’ll eat her cute hats! 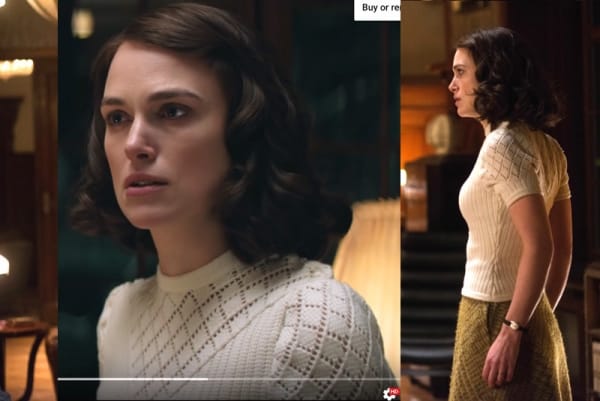 Alert Ravelry, because there’s a lot of great knitwear in this too. 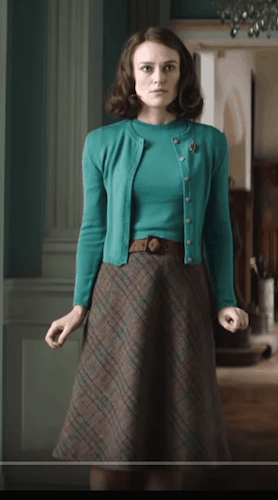 I liked this: simple green twinset with brooch and bias-cut plaid skirt.

This was probably my favorite outfit because of the amazing detailing on the green jacket — definitely zoom this photo!! There are inset pleats and a geometrically shaped waistband!! 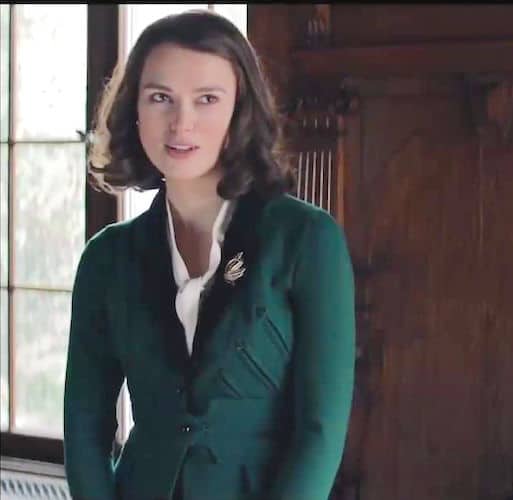 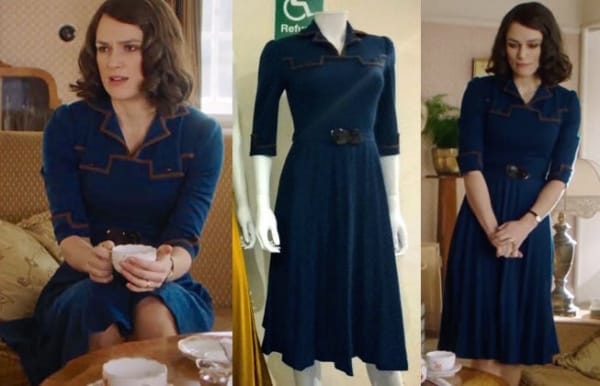 This blue dress had great detailing on the collar, chest, and cuffs. 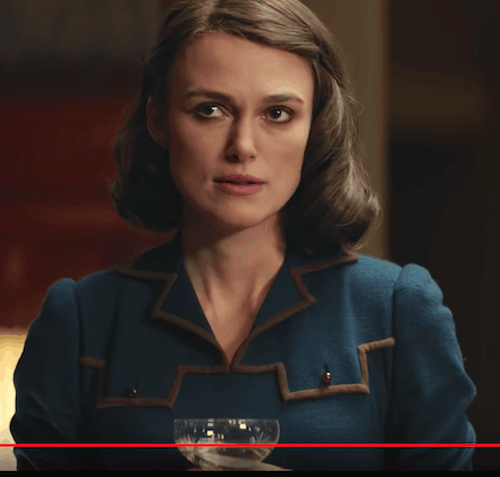 A better view of that detail – note how the chest trim is actually a pocket flap (see the button?)! 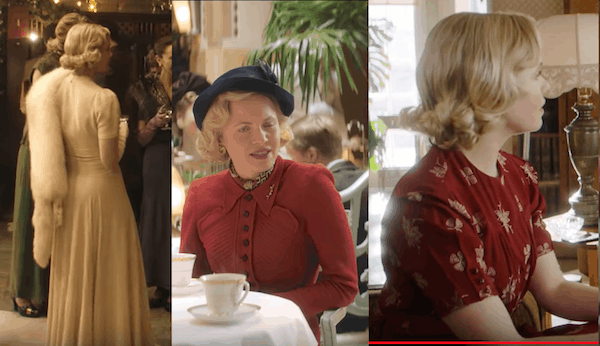 Kate Phillips (Wolf Hall, War & Peace, The Crown, Peaky Blinders) plays another English army wife who is Rachael’s main friend. Her wardrobe is relatively similar, although she wears a lot more reds. Also note her white evening dress on the right, and compare it to… 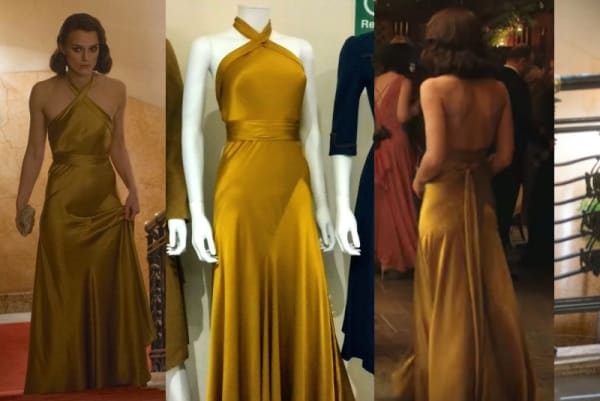 Keira’s ultra slinky evening gown! I immediately thought of the famous green 1930s evening dress from Atonement, and I was 100% right:

Nikitovic meant the gown to be:

“a tribute to the emerald green dress she wears in the movie Atonement. That dress is a masterpiece! But I wanted to represent a different dress, something original and mine. It took me a long time to find the perfect fabric and model” (Bad Google translate version of La Conseguenza: quando è il vestito a parlare). 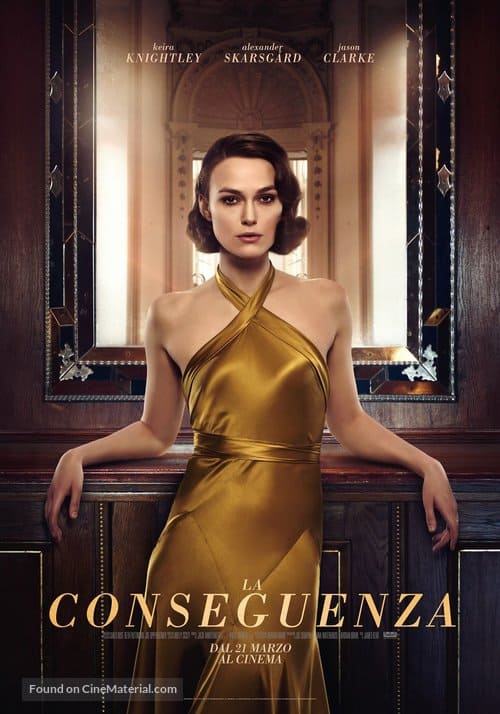 It’s stunning, although I immediately questioned why her character would be wearing a dress THAT out of style — this is SO 1930s. Yes, fashion/textile rationing, but… 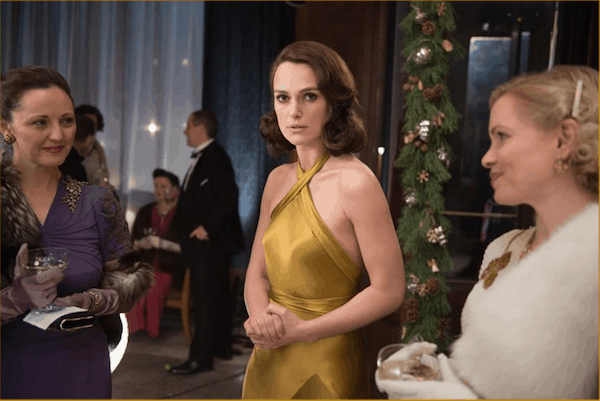 Oh well, Knightley was made to wear these kinds of styles, and she rocked it.

Have you seen Red Joan or The Aftermath yet?