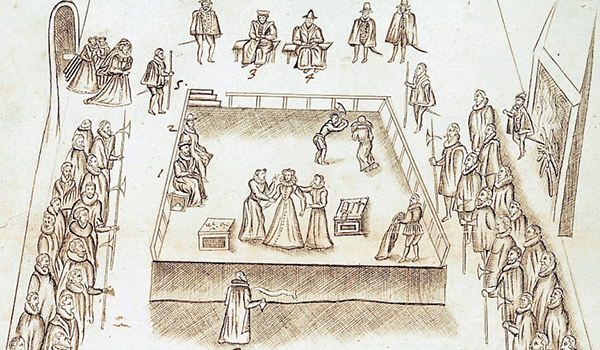 On February 8, 1587, Mary Queen of Scots was executed, which has, of course come up a few times in films and TV shows depicting her life. What’s interesting is that the outfit she wore to her death has been pretty well documented since the actual event occurred — but, of course, that doesn’t mean that every on-screen version gets it right.

What does the history say? Mary Stuart’s execution was a rather public event, and several different people wrote down what they saw in letters and contemporary records. Some of these were critical of Mary (such as English Protestant supporters of Queen Elizabeth) and others were a bit more flattering to her (like her Catholic friends). In Antonia Fraser’s seminal 1969 biography, Mary Queen of Scots, she sums up the scene as:

“Her satin dress was all in black, embroidered with black velvet, and set with black acorn buttons of jet trimmed with pearl; but through the slashed sleeves could be seen inner sleeves of purple, and although her shoes of Spanish leather were black, her stockings were clocked and edged with silver, her garters were of green silk, and her petticoat was of crimson velvet.

Stripped of her black, she stood in her red petticoat and it was seen that above it she wore a red satin bodice, trimmed with lace, the neckline cut low at the back; one of the woman handed her a pair of red sleeves, and it was thus wearing all red, the color of blood, and the liturgical color of martyrdom in the Catholic Church, that the queen of Scots died.*

*But it was a dark red, a sort of crimson-brown, not scarlet as is sometimes suggested.”

The footnotes in Fraser’s book refers to the Letter-books of Sir Amlais Paulet, who was Mary Stuart’s jailer from January 1585 until her death in 1587. The letters were edited by John Morris in 1874. The original description of what Mary wore on her dying day is:

“As to her dress, he says “she stood on the black scaffold with the black figures all around her, blood-red from head to foot. Her reasons for adopting so extraordinary a costume must be left to conjecture. It is only certain that it must have been carefully studied, and that the pictorial effect must have been appalling.” And he quotes from the Vray Rapport the words, “Ainsy fut executee toute en rouge.”

The rouge was not “blood-red,” but a dark red brown. Blackwood says that she wore, with a pourpoint or bodice of black satin, “un juppe de vellours cramoisi brun,” and the narrative called La Mort de la Royne d’Escosse says the same. There it is in the June inventory, “Une juppe de velloux cramioisy brun, bandee de passement noir, doublee de taffetas de couleur brune.” In the inventory taken after her death it is wanting. As it happens, if she had wished to be “blood-red,” she might have been so, for in the wardrobe there was “satin figure incarnte,” “escarlet,” and “satin incarnte.” These figure in both the June and February inventories.”

OK, so she was probably trying to make a point, given that she knew the event was something of a spectacle and she was always very conscious of her own status in the world. But she also didn’t push it to crazy heights by wearing bright red — given her background as a born-and-raised queen, perhaps that didn’t suit her dignity. She made her point distinctly, regally, true to her faith, and without excess.

How has this been portrayed on screen? Well, it starts out good and then goes to hell!

I’m only including this one for amusement’s sake. It’s an early film by Thomas Edison, and Mary is portrayed by the wife of his company’s treasurer. The beheading effect is created with one of the first jump-cut camera tricks ever used on film and was truly startling to early audiences. However, I have no idea what color the costume is (not that it appears all that 16th-century in style).

It should come as no surprise that this insanely excellent miniseries has the best depiction of Mary’s execution garb. As with all the costumes in the show, Mary’s clothes in her brief appearance are historically accurate as possible. For her execution, she walks in wearing a black gown that is removed to show a dark red kirtle, then her ladies attache red sleeves to her gown. It is precisely as described in Fraser’s biography. She enters wearing black — it appears to be a surcote or loose gown, which works better than a doublet on TV for expediency. Putting on her red sleeves. This feature film takes a more theatrical approach, as is typical. Mary does arrive at her execution in black and disrobes to reveal a red gown, although the design is more of an approximation of 1580s than a precise reproduction. This two-part HBO series won several awards for costume, but I feel like O’Neill concentrated all his best work on Helen Mirren as Queen Elizabeth and gave very  little attention to Mary Stuart, whose execution was a key plot point in the first episode. She gets the red reveal but the quality of both outfits feels subpar compared to everything else in this show. What this execution lacks in historical costume, it makes up for in gruesome axe-wielding. Again, a surcote, which I’m fine with, but it looks like bathrobe velour and I side-eye that funky ruched trim. Here’s where things really go off the rails. Director Shekhar Kapur didn’t claim to be making Elizabeth (1998) or this sequel as truly period pieces, but whoa, WTFrock is going on with this red chemise for Mary’s execution? It looks like she’s stripping down to a fantasy grecian pre-raphaelite kind of underwear — none of which is appropriate for a 16th-century queen. It’s also really bright red! Off the shoulder? Really? So filmy, so sheer!

Including just to be complete since the show did execute Mary in the series finale. She only had a black dress though, satin with a scoop neckline and giant bell sleeves. Whatevs. When this is the least offensive dress of the bunch, you know something’s amiss. Yep, there’s a zipper. Off with her head!

It’s a repeat! Did Alexandra Byrne not have enough budget for a new dress? Or was she just feeling lazy? I don’t care because it’s still wrong. Also the black gown literally RIPS AWAY to reveal this red chemise like some velcro striptease. I laughed out loud in the theater. Fine, sure. But why is she wearing what looks like the Order of the Golden Fleece? Guess it’s not the exact same dress as in Golden Age — look at that crochet trim at the neck and sleeve!

What historical moments on screen make you go “huh”?