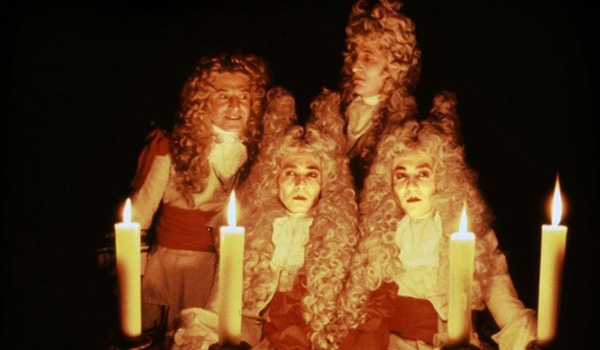 So many readers have requested that we review The Draughtsman’s Contract (1982), and the few photos floating around the interwebs intrigued me. Famed art-house director Peter Greenaway’s first full-length film is set in 1694 and filmed at Groombridge Place, a 17th-century manor near Kent, England. 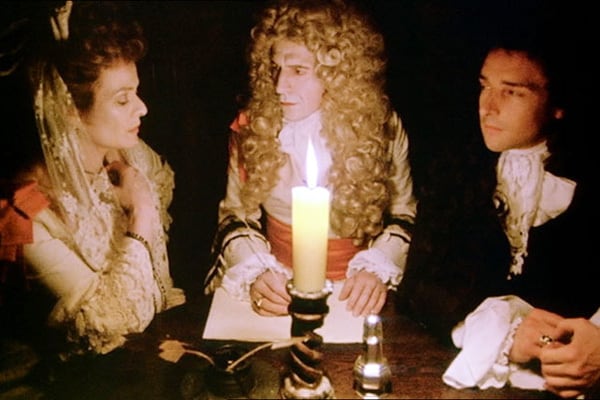 The contract of the film’s name is between the draughtsman Mr. Neville (Anthony Higgins) and Mrs. Virginia Herbert (Janet Suzman), as she requests drawings of her home estate to impress her negligent husband. Part of the contract, however, requires that she sexually service the artist, which she’s not particularly happy about. Halfway through the contracted period, her married daughter adds a secondary agreement, based on certain suspicions. There’s a mystery at the heart of the story, which is left ambiguous, and the whole thing is incredibly arch, artsy, and deliberately obtuse. This is really one of those flicks where you need to sit back and let the art wash over you.

Costumes in The Draughtsman’s Contract

The film is set at a specific date for plot reasons, but the costumes are an exaggerated style that just riffs on the period. According to director Peter Greenaway in The Guardian:

“The year is 1694, a significant year in English history for lots of reasons. It’s the year the Bank of England is founded. It’s several years after the battle of the Boyne, so the Dutch Protestant aristocracy is now firmly in place in England. That year also saw the introduction of a comparatively minor law that was very significant for women and very significant certainly for this film: the Married Woman’s Property Act. This finally meant that women could inherit property and have limited control over inheritance, their own children and certainly property. The film revolves around these ideas of female and male inheritance.”

The costumes evoke the period but they do veer away from it. Greenway expressed this, in the same article, as: “We tried very hard to create a sense of artificiality about this community, by taking the costumes of the period, but extending them and exaggerating them.”

As such, only the outlines of the actual historical fashions are necessary. For example… 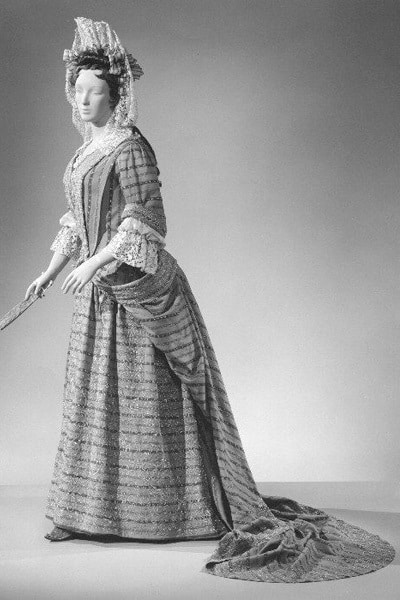 The women’s gowns are generally in the shape of this 1690s mantua, via the Met Museum. 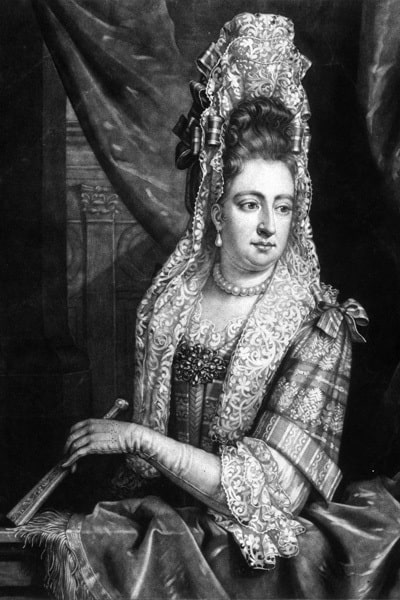 This etching of Queen Mary, via V&A, circa 1698, shows an elaborate fontange cap like those worn in the film. 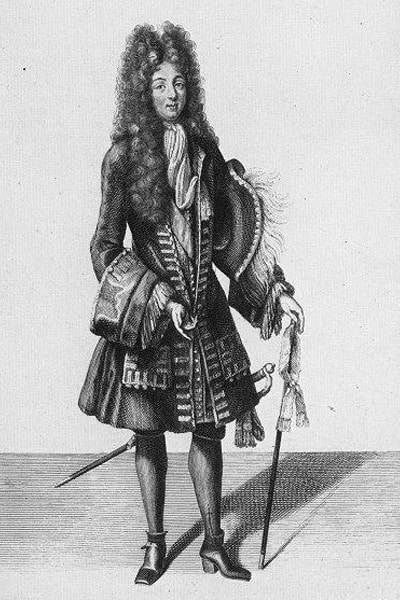 The men’s costumes hew mostly to the historical look of this 1690s men’s suit. 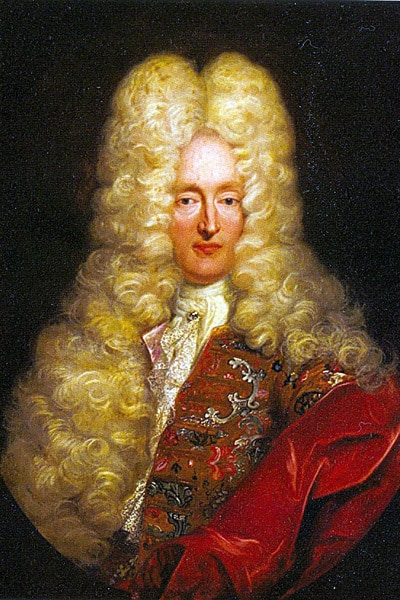 And this 1694 portrait of Anton III von Montfort by Franz van Stampart gives a closeup of the fat-bottomed wig styles worn in the film.

Unfortunately, it was hard for me to discern a ton of details in the DVD — the movie was originally filmed on Super 16mm, blown up to 35mm for theatrical release, and digitally remastered, so there’s a distinct loss of fidelity. For example, I could see there was plenty of lace, but not what quality or historical appropriateness. Greenaway had said in The Guardian: “For women, lace was hugely important. The more lace a woman could display, the richer not only herself but her husband and her husband’s estate.” 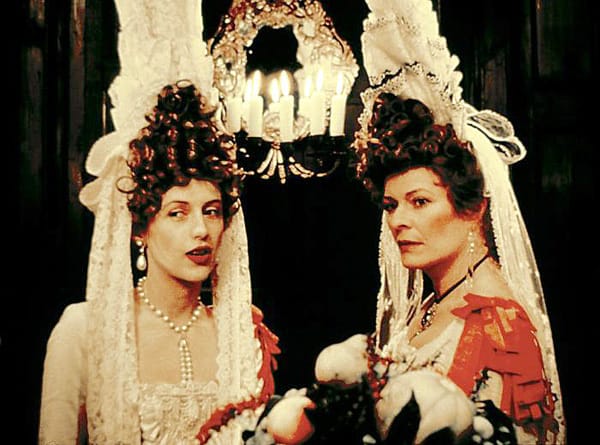 The fontanges are gorgeously tall. They do drip with lace. But I couldn’t tell anything about the lace, due to candlelit scenes and digital fuzz. 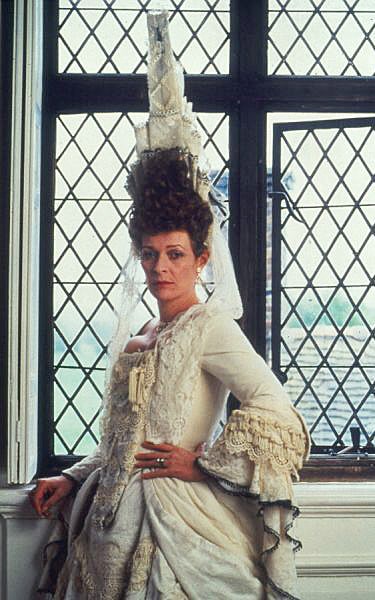 Promo stills have better details than screencaps, like the multiple layers of lace and fringe on the sleeves and bodice here. 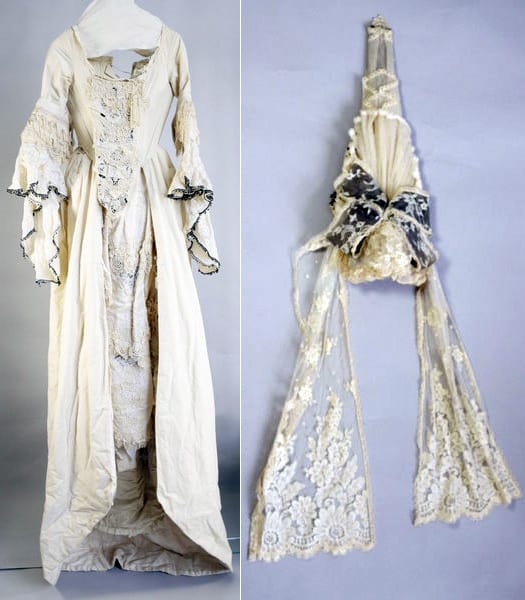 The V&A Museum has this gown and fontange worn by Janet Suzman — not on display so a little worse for wear, but some fine details are more apparent in the closeups. 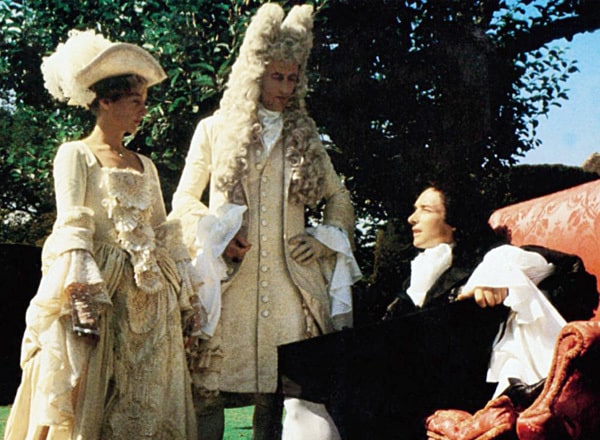 Early in the film, the daughter and her husband are in white, while the the draughtsman (seated) is in black. 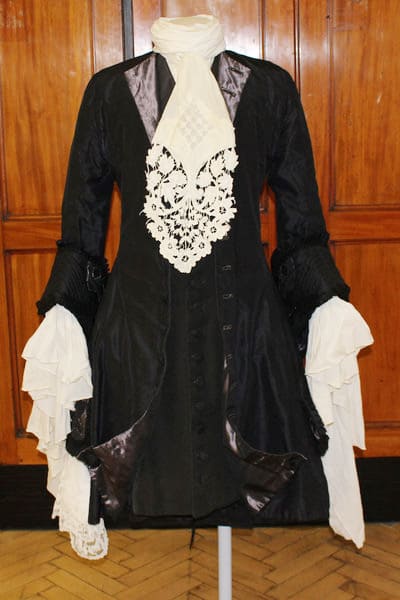 The V&A Museum has the suit worn by Anthony Higgins, which shows more detail, like the velvet and fabulous lace. 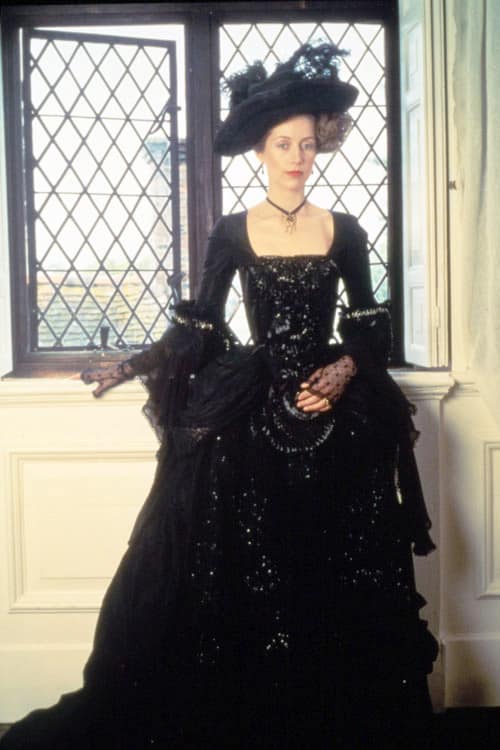 The daughter’s mourning gown is stunning. The shape of her gowns all look a bit more 18th-c. than 17th though.

The director further explains this, in The Guardian:

“There is also colour-coding in the film. In the first half, the aristocracy are all dressed in white. But the draughtsman always wears black. And then halfway through the film, after the essential, pivotal plot change, the costume colour-coding changes completely so the draughtsman turns up in white when everybody else is in black. Like a classic outsider, he always gets it wrong.”

Costume designer Sue Blane is best known to me as the creator of the sweet transvestite looks for The Rocky Horror Picture Show (1975). But “blane old Sue” also did costumes for Lady Jane (1986) and a ton of London theater and opera, and she’s no slouch. The fontanges are off the hook in The Draughtsman’s Contract, giving the men’s fat-bottomed wigs a run for the money. Also, full petticoated men’s coats are in action, and trained mantuas are rockin’ the manor house. However, someone decided smocks aren’t sexy during the sex scenes, so there’s a lot of corset chafing going on, ouch. 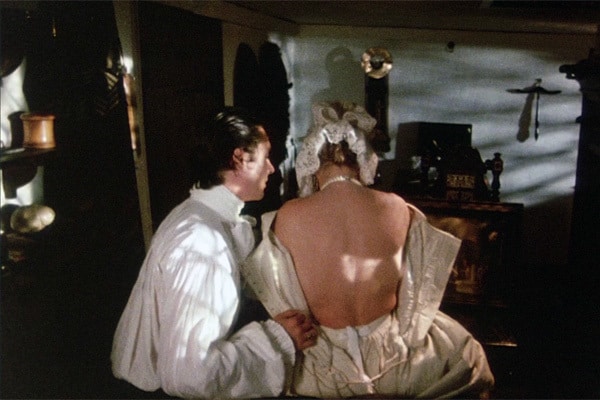 I should be happy there aren’t metal grommets, right? 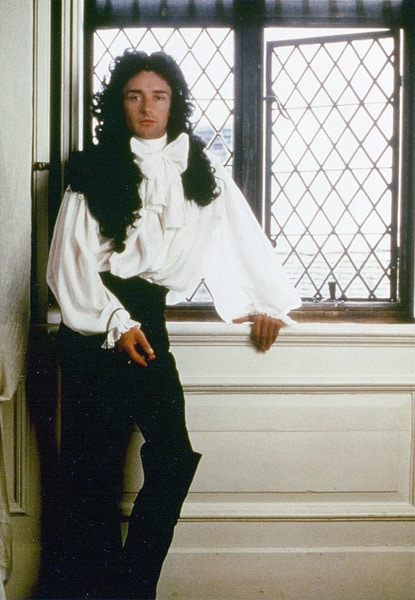 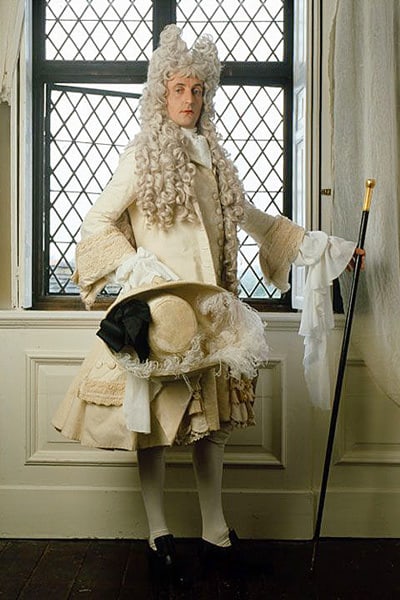 The son-in-law’s costume is an exaggerated take on 1680s, with the tall wig, long sleeves, and full coat skirts. 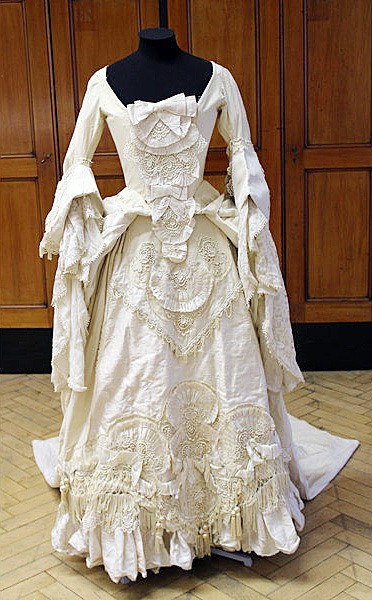 Another costume at V&A Museum — worn by a minor character but still showing tons of embellishment (honestly, a lot more than is visible on screen!). 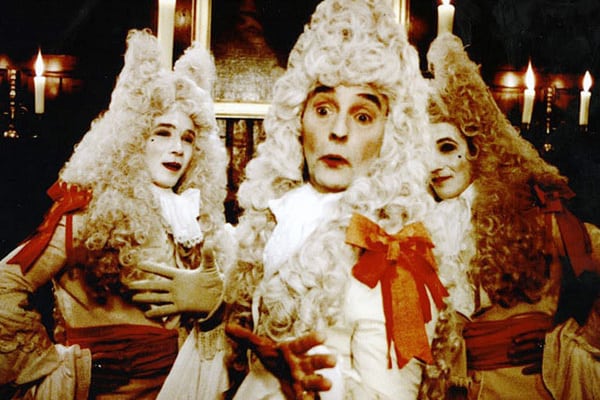 So will you re-watch The Draughtsman Contract now?