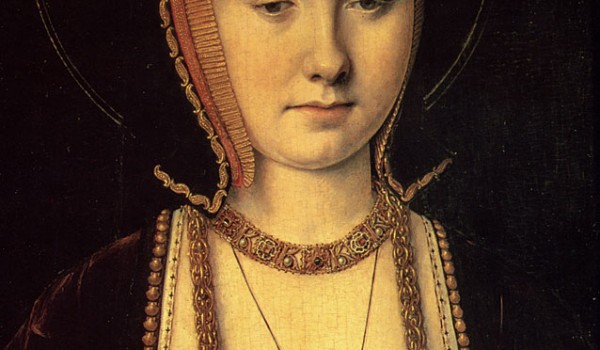 Catherine of Aragon — the first, and often one of the most underrated, of King Henry VIII’s wives. Here, we rank Catherine of Aragon’s screen performances to see which actresses most resembled the real person.

When I was young, I read Antonia Fraser’s Six Wives of Henry VIII, Alison Weir’s Six Wives of Henry VIII, and Karen Lindsay’s Divorced, Beheaded, Survived: A Feminist Reinterpretation of the Wives of Henry VIII. I fell in love with Catherine as a tragic figure (Henry VIII = world’s biggest shmuck!) who at the same time had a spine of steel (never agreed to a divorce, never stopped considering herself queen, refused to go meekly into that dark night). Oh, and she was born with the way cooler name “Catalina,” which is far more interesting than “Catherine.”

Most depictions of Henry and his wives start when things get interesting, when Anne Boleyn comes on the scene and Catherine is relatively old. However, when Henry and Catherine married in 1509, they were very much in love. Well, as much as the shallow, spoiled Henry ever could be, which was narcissisticly. He loved the idea of rescuing this beautiful princess, and everything seemed rosy. And, in fact, while Henry wasn’t a saint, it wasn’t until 1525 — 16 years, mind you — that he really gave up on Catherine. Again, see above re: shallow bastard.

Now that I’m older, I’m of a more mixed opinion about Catherine. I still admire her spine of steel, and still feel sorry for the way Henry treated her. But, I also wished she would have been a little bit more realistic, so that she didn’t have spend her final years suffering, and her daughter Mary hadn’t had such a crappy childhood and turned out so messed-up. And, then maybe Henry wouldn’t have turned on Anne Boleyn (and daughter Elizabeth) so quickly (okay, yes, appeasing spoiled brats is probably not the best option).

But, of course, you can’t rewrite history! Or can you? Because filmmakers sure love to do so!

Catherine of Aragon was once young, pretty, and admired by her husband. She was fair complexioned and had strawberry blonde hair. Perhaps this is due to the fact that her maternal great-grandmother (Catherine of Lancaster) was English. Perhaps it was due to the fact that there are all kinds of colorations amongst Spanish people. Also, she started out curvy, and definitely got fat by late middle age.

Possibly Catherine of Aragon (or her younger sister Juana). Either way, this is a good idea of what she looked like as a child. By Juan de Flandes, c. 1496. Possibly a young Catherine, about 4-9 years before her marriage to Henry. Alternately, it could be Henry’s sister Mary. Very few of these physical traits have ever made it to film. Most filmmakers seem determined to depict her as SPANISH (ole!) with olive skin and black hair, and as old and dried up by making her skinny-bordering-on-bony.

Luckily, there are a few productions that got it right (or, at least, better).

Ranking Screen Catherine of Aragons, from Hell No! to Yes! Yes!

(Note: I’m skipping black & white productions, as I can’t pick on the hair color there)

HELL NO: Irene Papas in Anne of the Thousand Days (1969). Black hair, olive skin, bony. I’d divorce her too, just out of total confusion — “Wait, I married a curvy redhead, and then I woke up next to her complete physical opposite. WTF?”

APPARENTLY WE’RE IN FANTASY LAND. WHATEVER. Ana Torrent in The Other Boleyn Girl (2008). Wrongity wrong wrong. ARE WE EVEN TRYING HERE? Annabelle Dowler in David Starkey’s The Six Wives of Henry VIII documentary. Listen, Starkey. I know you’re a pop historian, and I know you’re a misogynist, but come ON. I find it very hard to take your history seriously when I’m looking at that hairstyle (or lack thereof). In fact, I rate you as worse than The Other Boleyn Girl (2003), just for having offensive hair. I CAN’T EVEN. Yolanda Vazquez in The Other Boleyn Girl (2003). I’m letting a lot slide here, just because I’m so relieved I don’t have to look at much of her hair. PLUS 2 FOR A NICE GABLE HOOD, MINUS 1 FOR DARK BROWN HAIR. Joanne Whalley in Wolf Hall. TEETH GRIND: Maria Doyle Kennedy in The Tudors (2008). She’s a lovely, talented actress… but she’s Irish and she looks it. She’s got black hair. She’s got a beautiful regalness (regality?) that is a different look from Catherine. Granted, if they’re trying to show that Catherine wasn’t just a boring old hag, then, I will let this slide a little bit. Not too much, though. Don’t go getting cocky. Frances Cuka in Henry VIII and his Six Wives (1972) again. She gets older, but she still has red hair! She’s still curvy! She’s still halfway-decent-looking! She actually looks a little too good! Annette Crosbie again in The Six Wives of Henry VIII (1970). SHE LOOKS LIKE THE AGE 40ish PORTRAITS OF CATHERINE. SHE’S STILL CURVY. HER HAIR HAS WASHED OUT BUT IT’S STILL RED. SHE’S DEPRESSED BECAUSE HENRY’S A JERK (wouldn’t you be?). SHE LOOKS OLDER AND TIRED AND SAD. THANK YOU, BBC, THANK YOU. APPARENTLY I’VE BEEN A VERY GOOD GIRL THIS YEAR!