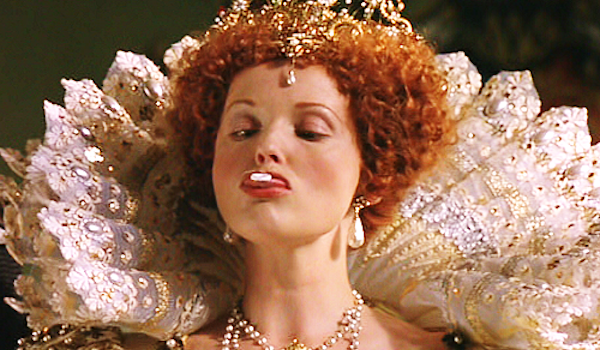 Usually, when we think of Queen Elizabeth’s life, we think of it in terms of high drama. Her fragile claim to the throne, the illegitimacy stigma that followed her for her entire life after her mother’s execution, her staunch choice to remain celibate when she was the marriage catch of Europe, her conflicting desire for love and duty … All gripping facets to a complicated, remarkable woman.

However, I’m going to dedicate this entry to a depiction of QEI that breaks with the typical dramatic spin: Queenie, portrayed by Miranda Richardson in Blackadder II. 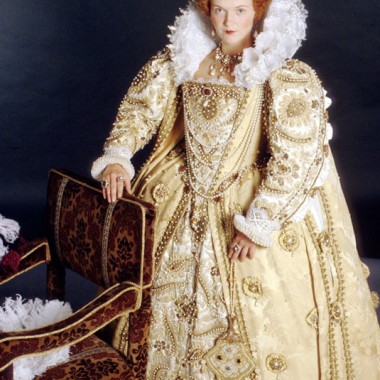 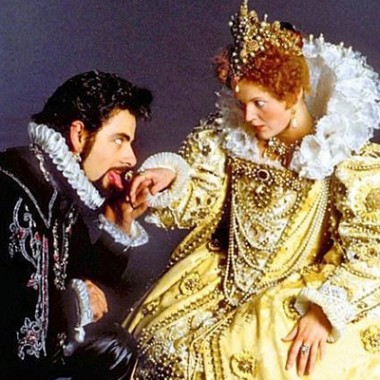 Queenie is meant to be a comical caricature of Queen Elizabeth I. She’s ditzy, fluffy, sociopathic, and toys with Lord Edmund Blackadder in cruel and hilarious ways. She is the highly unstable center of focus for the main characters and their scheming, playing them off one another in a way that suggests she’s not as stupid as she acts. She’s also given some of the best lines in the show that play off actual quotes from QEI, such as the famous speech Elizabeth gives the troops at Tilbury.

The really remarkable thing about the entire Blackadder franchise, not just the second series set at the Elizabethan court, is that this is a show with serious costuming chops. For all the silliness, the costumes by Annie Hardinge are superbly fitted and beautifully constructed, and clearly show an eye for the correct historical silhouette. Hardinge’s work in the first, third, and fourth series is great, but I think she really shows her talents in the second series, as she was given a fantastic female character that’s usually the center of everyone’s attention. This, coupled with the choice to set the show aesthetically in the 1590s, gave her a lot of visual territory to go way over the top. And of course, we can’t fail to mention that Lord Percy’s famous orange suit is one of the best recreations of Robert Dudley’s portrait out there. 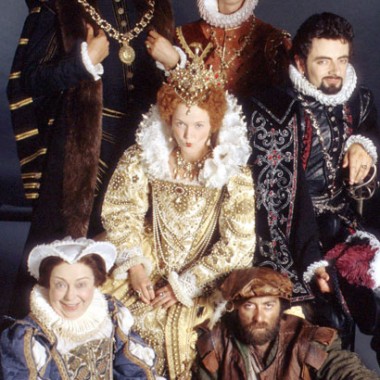 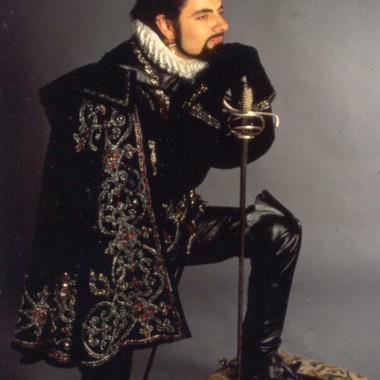 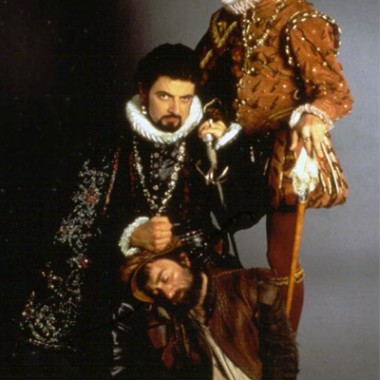 It’s also worth noting that Hardinge is the costumer on several of my other favorite British TV series, including the epically surreal The Mighty Boosh and the scathingly funny Black Books. She also has costumed Austenland, Shaun of the Dead, Extras, Spaced, Jonathan Creek, and some Doctor Who thrown in there for good measure.

And finally, if you’ve ever wondered where our podcast sign-off “Byeeeeeeeee” comes from, well…