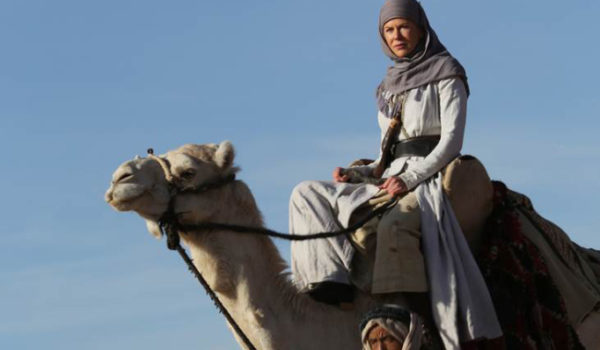 Queen of the Desert is a 2015 film starring Nicole Kidman as Gertrude Lowthian Bell, an early 20th-century English woman who explored in the Middle East. It’s been released Very Slowly, because it’s gotten lackluster reviews, so it’s probably been a while since we’ve heard anything about it. The film was directed by SUPER arty director Werner Herzog, and the costume designer was Michele Clapton of Game of Thrones fame (how’s that for a mix-up?).

Now, I used to be a big Nicole Kidman fan because of A) Team Redhead and B) Dead Calm. However, as she went blonde, stopped wearing amazing dresses at the Oscars like that embroidered chartreuse satin number, and started botoxing up the WAZOO, the love faded. Now, the last thing I want to do is perpetuate the weird double standard that we have for female celebrities in the US: if you’re not 12, you’re mocked for showing any signs of aging but also mocked if you do anything resembling plastic surgery/botox/etc. Showing signs of aging generally means no work for you (I’m sorry, but Helen Mirren and Susan Sarandon haven’t only been moisturizing), so most women have to do something (botox, plastic surgery, chemical peels) to keep a toe in the game (and they’ll probably be retired anyway).

SO, I am not here to mock Kidman for having to negotiate this damned-if-you-do-damned-if-you-don’t situation. On the other hand, I got pretty frustrated watching her try to act in films like Cold Mountain and Grace of Monaco because if an actress can’t move her face, it really gets in the way of her performance. So color me happy to find that in Queen of the Desert, she actually can move her eyebrows and mouth. 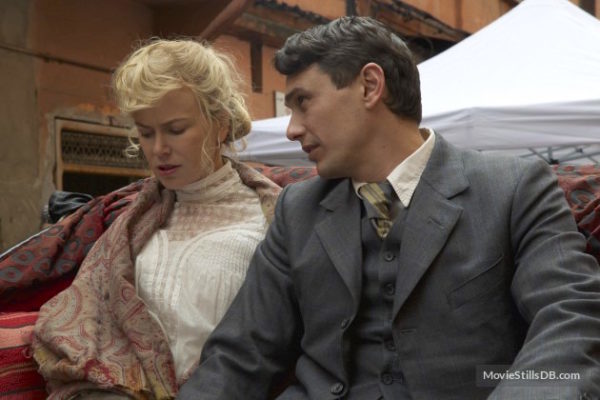 On the other hand… when the movie starts, Gertrude is supposed to be 34. Kidman doesn’t look her real age of 49, but she does look like someone who is minimum over 40 and has had some work done. So, it made it hard for me to accept her as a young-ish woman in the first part of the movie, especially as she’s paired with James Franco as civil servant Henry Cadogan. I can’t figure out how old Cadogan would have been in 1902, but Franco is 38 and he reads as waaaaaay younger than Kidman. 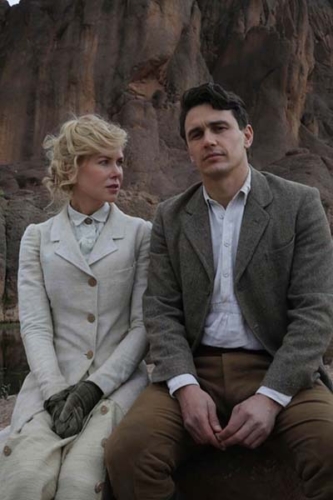 Moving on … let’s talk plot. Gertrude Bell was the daughter of a wealthy Englishman. She attended Oxford and was clearly very intelligent and independent. The film begins in 1902, with Gertrude at home and going stir crazy. Her father sends her to stay with her uncle (the ambassador? consul?) in Tehran, and she immediately falls in love with the Middle East. She meets Cadogan, Things Happen, and she finally decides to wander the desert … ostensibly to learn about the various peoples who live there and to experience the beauty of the desert.

While Bell is certainly a fascinating character and of course a biopic would and should focus on her, this film jumps right onto the Orientalism bandwagon and keeps on trucking. Oh, there’s lots of discussion about how Bell is the only person to really care about understanding the people that live in the Middle East, so much so that an end title card tells us (patronizingly) that she is “still remembered among the Bedouin tribes as the European who best understood them” (or something like that). However (and you knew this was coming, don’t you)… 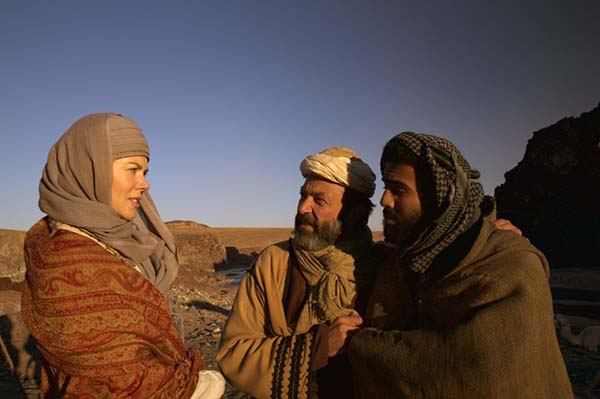 I can’t tell you anything about these guys except they LURVE Bell. 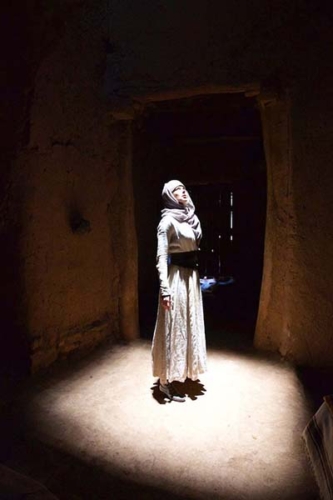 It’s all about Bell, and nobody else.

Who are these women? I have no idea.

There are good things about this movie. There’s a lot of beautiful shots of the Moroccan desert where it was filmed, and a lot of arty lighting and framing… but it doesn’t get tedious the way some arty-obsessed-with-the-landscape films can get. Bell is a fascinating person, and her story is certainly worthy of telling. Robert Pattinson (my boyfriend but only when he sparkles) plays T.E. Lawrence (aka Lawrence of Arabia), but before you freak out, he’s kind of okay and he isn’t on screen for very long. And Damian Lewis is dapper as another possible suitor for Ms. Bell. 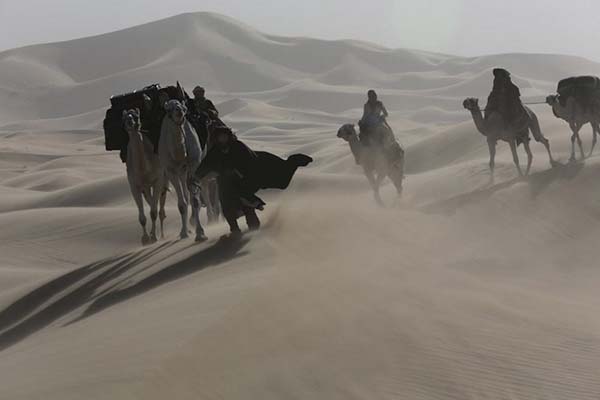 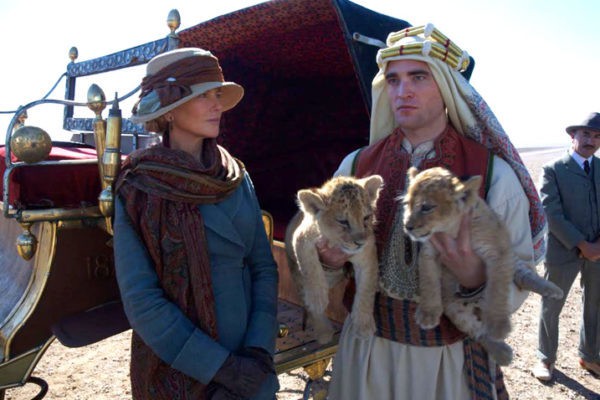 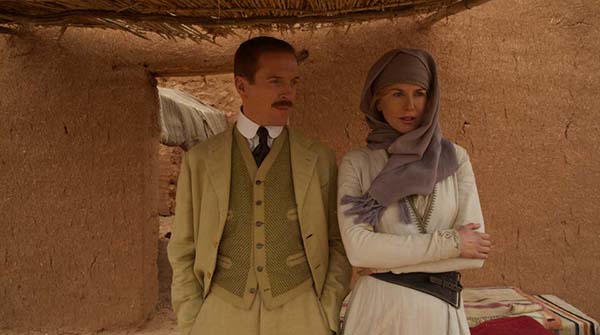 Helloooo, consul (or whatever)!

However, I’ve got a few final nitpicks (when don’t I?) before I talk costumes: 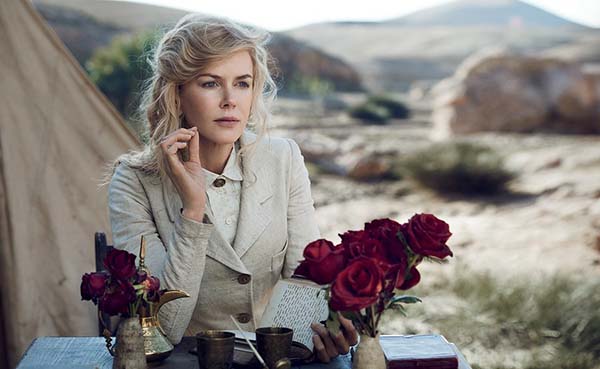 Now, Costumes in Queen of the Desert!

The film begins in 1902 and continues through World War I (so, 1918ish?). According to costume designer Michele Clapton, “We did actually do correct period pieces for her … and all the Europeans that she met [in the film] were incredibly correct” (“Queen of the Desert” Costume Designer Michele Clapton on Working With Werner Herzog and Corseting Nicole Kidman) — and she’s right. Clapton did a spot-on job portraying the early 1900s: 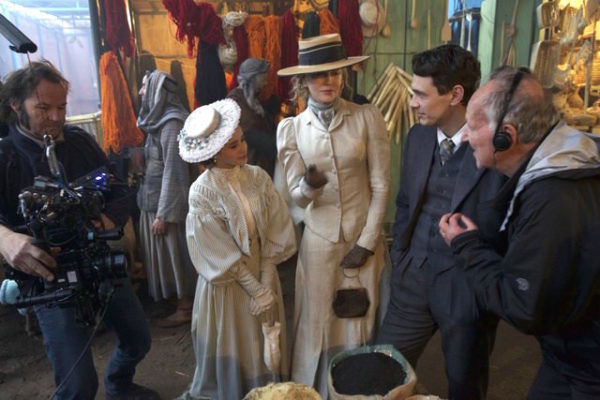 c. 1902-ish. Okay, so Kidman is a bit fashion-forward, but her cousin (the shorter woman on her left) had this amazing pale blue and white striped suit with large puffed sleeves.

Another shot of the cousin’s suit.

Clapton did a particularly good job with evening wear. At the beginning, Kidman/Bell is still entrenched in European society, and she attends multiple formal evening events at the Tehran embassy. Clapton perfectly captured the silhouette and layering typical of the very early 1900s: 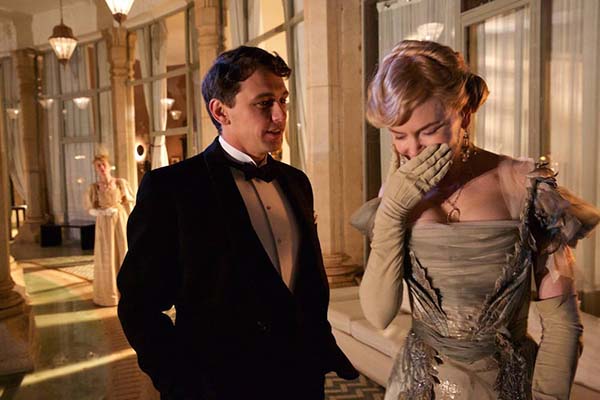 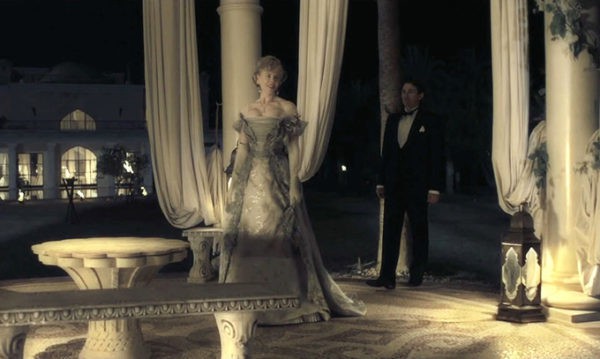 Bell’s cousin got some similarly appropriate clothing, although much more delicate and lighter colored as befitted her character: 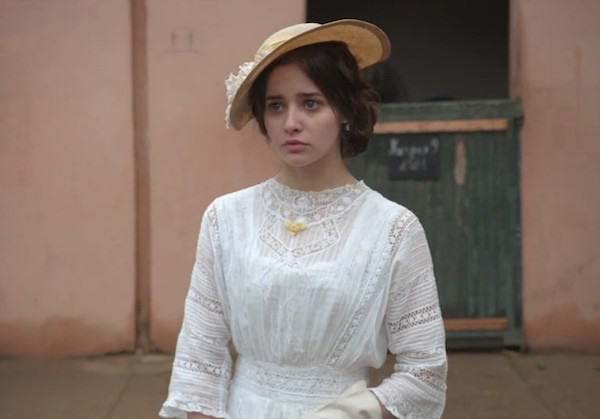 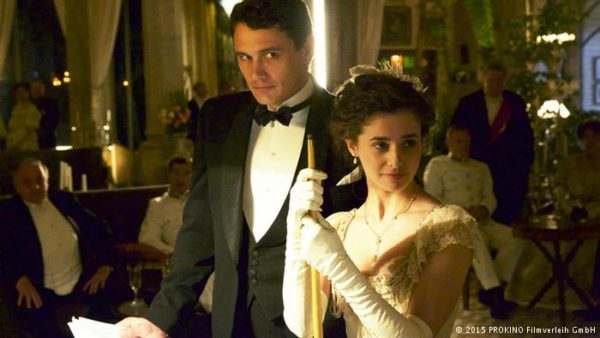 For the second half of the movie, Kidman/Bell wears mostly one Middle Eastern-style outfit. Designer Clapton spoke about the director’s vision for this ensemble:

“When I first spoke to him on the phone, he said, “I just want this one costume, and she’s a bride of the desert.” One costume for a whole film was quite a challenge … It didn’t end up being one costume, because it couldn’t be. But it was the main costume, and probably was worn for three-quarters of the film, I’d say … But it just allowed us this slight artistic license that we wanted for her when she was in the desert, that she embraced the ways of the desert visually more than she probably did in reality” (“Queen of the Desert” Costume Designer Michele Clapton on Working With Werner Herzog and Corseting Nicole Kidman). 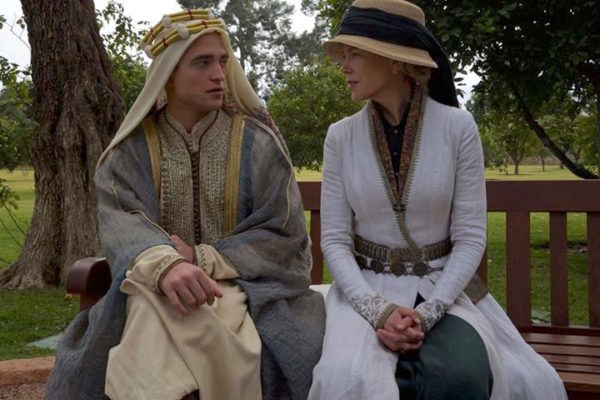 It’s a pretty ensemble, although I’m confused how it would stay white when it’s basically the only thing she’s wearing. 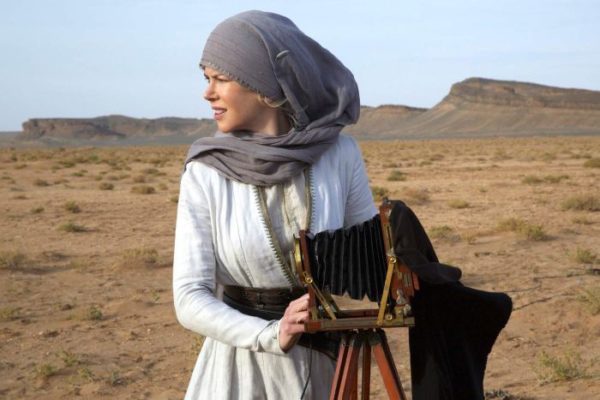 Other than the cleanliness issue, the main thing I raised my eyebrows at (and only slightly) were the two leather belts that Kidman/Bell wore most of the time — they seemed awfully steampunk to me. 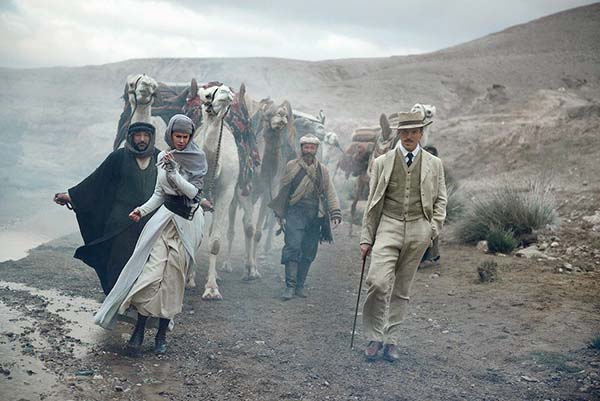 Clapton said that she took inspiration more from men’s clothing for this ensemble: “It was the men’s costumes more than the women’s costumes that actually I decided to take the influence from, looking at the way the Bedouin are, their traditions and the embroidery” (“Queen of the Desert” Costume Designer Michele Clapton on Working With Werner Herzog and Corseting Nicole Kidman). 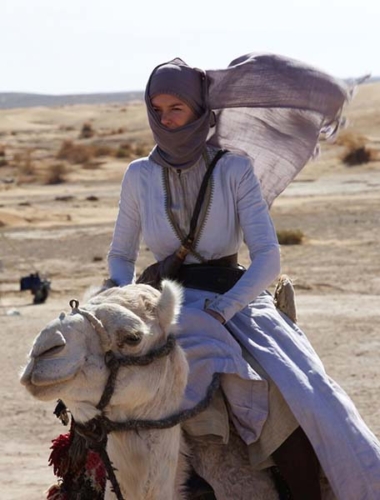 Near the end of the film, Kidman/Bell gets a new, Middle Eastern-inspired outfit made from an Indian- or Persian-style printed cotton … and I WANTS THE PRECIOUS, but to make an 18th-century dress for myself! 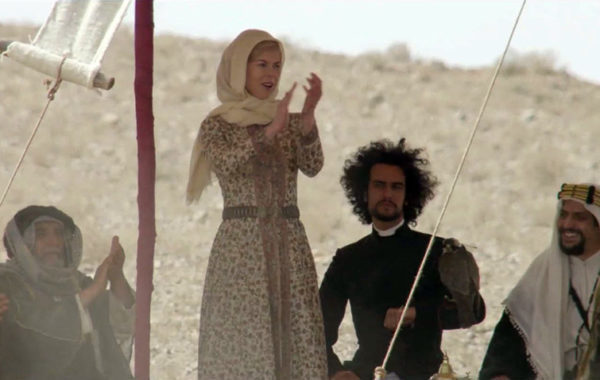 Gorgeous fabric. The guy on Kidman’s left/our right, however, had hilarious hair.

Have you seen Queen of the Desert? What did you think of Game of Thrones‘s costume designer Michele Clapton’s foray into historical costume?