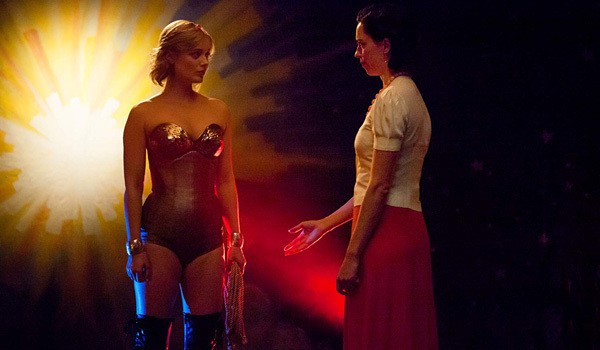 True or not, Professor Martson and the Wonder Women (2017) is a well-crafted story. As with all biopics, there’s some controversy about how much of this film is accurate to what really happened, and in this case, it’s mostly about sex. And to me, that’s the part that makes it a good movie — not necessarily the sex (it’s not explicit) but the love story between the two women, which is conjecture according to a family member. Told through flashbacks, we see Professor Bill Martson (Luke Evans) teaching psychology at Harvard, where his wife Elizabeth (Rebecca Hall) has been refused the PhD she’s earned, and it’s implied that she’s contributed significantly to his research and work. They take on a teaching assistant, Olive Byrne (Bella Heathcote), who they don’t realize is related to feminist pioneer Margaret Sanger. Soon enough, the three fall into a love triangle, though not the most typical one — things start between Olive and Elizabeth then include Bill, and throughout the entire movie, the relationship between the women is paramount. Historical accounts differ, suggesting that Bill started an affair with Olive and gave Elizabeth an ultimatum to let the new girl move in or he would leave his wife. But it suits writer-director Angela Robinson better to tell the story as “how did he [Martson] get to Wonder Woman, and how he got there was through his relationship with these two women.” It comes off far less patriarchal and male gaze-y when the two women are in love with each other and choose to be in this three-way relationship of their own accord. The film probably makes their story into more of an idealized polyamorous threesome than it may have been. So, enjoyable to watch as a movie, but don’t kid yourself that this was how it went down or that this was precisely the inspiration for the Wonder Woman comic.

The action begins in the late 1920s and progresses through the 1940s, showing a nice progression of clothing and hairstyle changes. I’d like to have seen a little bit of aging on the actors, like a touch of grey hair or a little paunch. The costuming includes one or two bits of period fetish undergarments, though it’s barely risque. The prototype of the Wonder Woman outfit is as wild as it gets. This middy blouses is probably the trendiest thing Elizabeth wears. Stripes are a strong motif for Elizabeth starting in the ’20s part of the movie. Beautiful details on this coral ’20s sweater for Elizabeth. Olive wears this long pleated skirt with both blouses and sweaters, as you would in the ’20s. Another behind-the-scenes image — Bill in academic tweeds, Olive all in white, Elizabeth in rich coral & blue. The only hat Olive wears in the ’20s part of the film, appropriately a felt cloche, and with this swingy jacket. Home from work, a kiss for the breadwinner! Cute ’30s print apron. The ’30s burlesque scene that inspires Martson is rather subdued. As Marston develops the Wonder Woman comics in the early ’40s, the women are dubious. Elizabeth is in a secretarial outfit, while Olive has a jaunty print. Elizabeth wears the pants in the family literally and figuratively. Here, in the ’40s. Love the stripe inset on this ’40s dress and Elizabeth’s hairstyle (reminiscent of Wonder Woman’s as well). In the final scene in the late ’40s, Elizabeth wears a softer style, but more formal, while Olive is almost back to her youthful sporty gear.

Are you a fan of Wonder Woman? How much do you know about the history behind the comic?