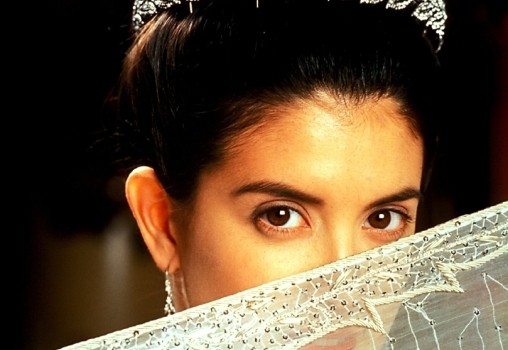 This gorgeous little flick, Princess Caraboo (1994), is one that I feel is often overlooked by those who love Regency Era films. Set in the early 19th century, the plot centers on a mysterious young woman who materializes on the property of local gentry, the Worrell family, clad in rags and speaking no discernible language. Her beauty and strange manners instantly captivate the townsfolk, and she is readily accepted into upper-crust society as a curiosity with potential access to riches in the Oriental spice trade. The imaginations of the townsfolk run wild, and it is almost immediately decided that she is Princess Caraboo, young noblewoman from Indonesia that had been captured by pirates and managed to escape, turning up on English shores disorientated and far from her homeland. Shenanigans ensue as everyone around her takes the story and runs with it, and Caraboo allows them to believe it, until it is revealed that she is not exactly who she says she is.

The plot is loosely based on the real life Mary Baker, an impostor who managed to convince members of the British gentry into believing she was the runaway daughter of an Indonesian sultan. 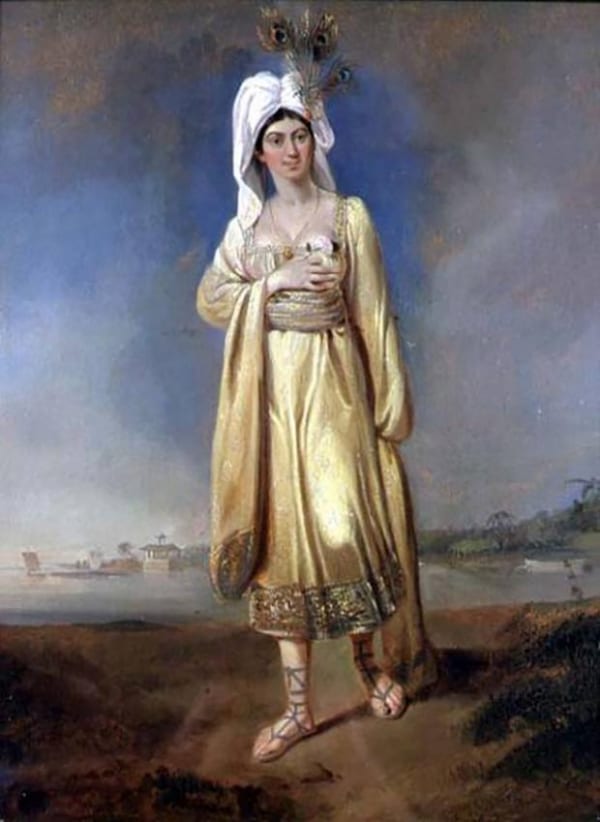 A portrait painted of Mary Baker c. 1817, in the guise of Princess Caraboo.

Phoebe Cates stars as Princess Caraboo/Mary Baker, opposite Stephen Rea as Mr. Gutch, a reporter investigating her story. Kevin Kline is cast as Frixos, the Greek butler who remains highly skeptical of Caraboo’s authenticity while his employers attempt to ingrate themselves with the mysterious young woman. 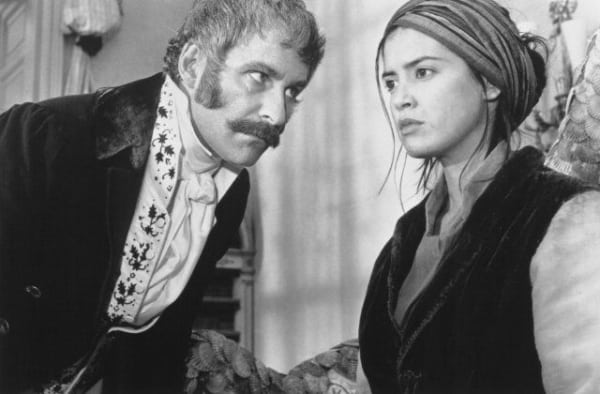 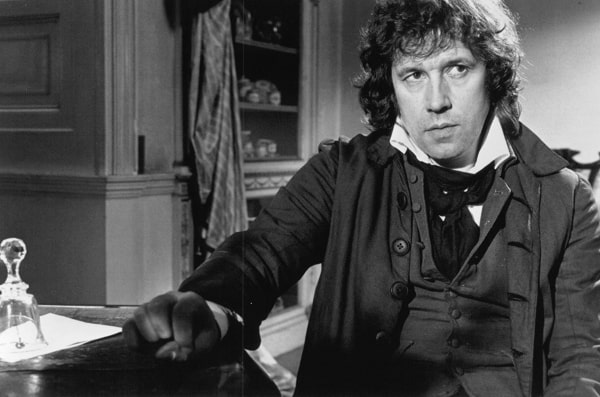 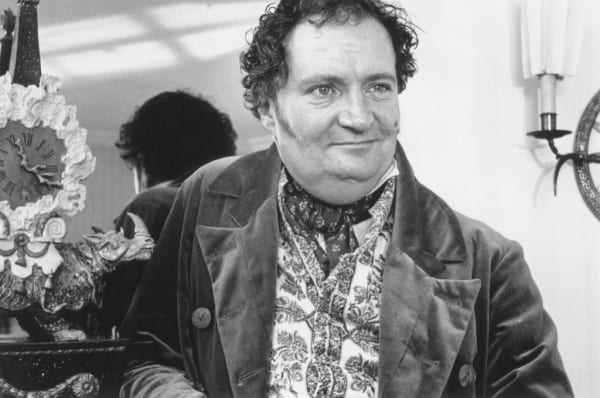 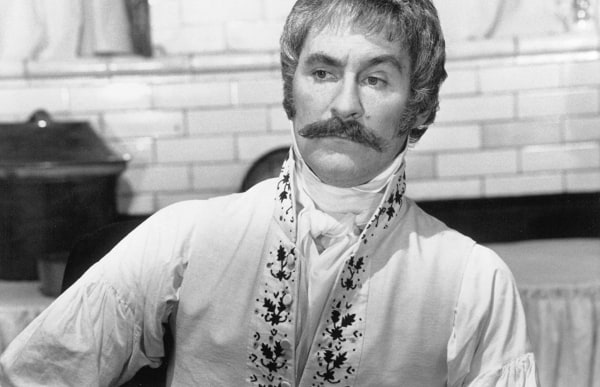 The film’s lavish sets and costumes (by Tom Rand) are the sort of culturally appropriative mash-up of 19th-century Other-ism that you’d expect from the period. Everything is beautiful, but almost none of it is grounded in any sort of reality, much like Carboo herself. Within the context of the plot, this works fabulously, building a magnificent feast for the eyes in terms of the costuming that breaks away from the usual bland Regency white dresses and gorges instead on colorful silks and outlandish jewelry and headdresses. These people have no idea what they’re doing, but gosh darn it, they’re committed to whatever it is! 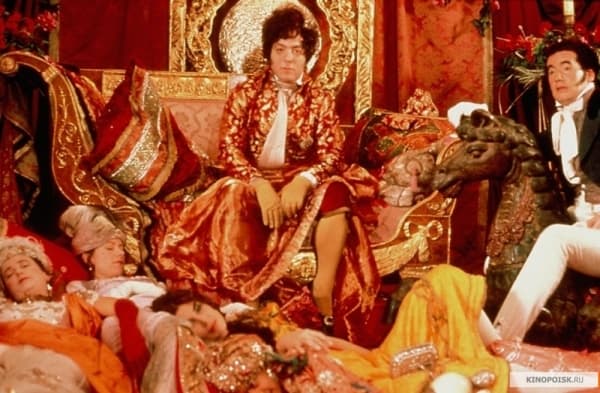 The Prince Regent, sitting upon his throne of iniquity. 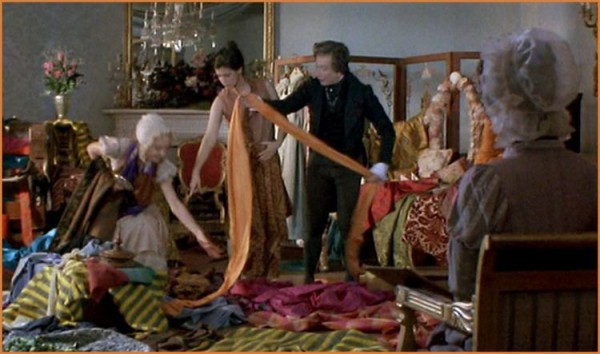 Any scene where there’s silk being thrown about has my undivided attention. 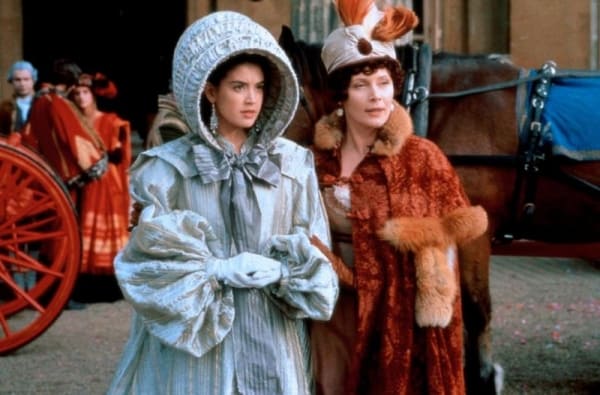 The ridiculousness of Caraboo’s outfit here makes me absurdly happy. The calash bonnet with the giant diamond earrings and poofy sleeved smock… It’s all so weird and wonderful. 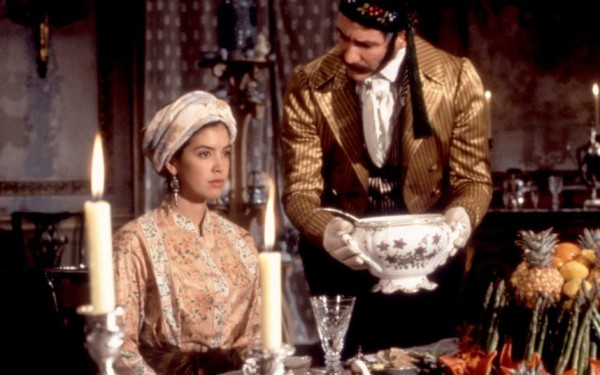 The best scenes are between Caraboo and Frixos, who absolutely does not buy her shit one little bit. It’s also no wonder with that kind of chemistry, that Kevin Kline and Phoebe Cates are married. 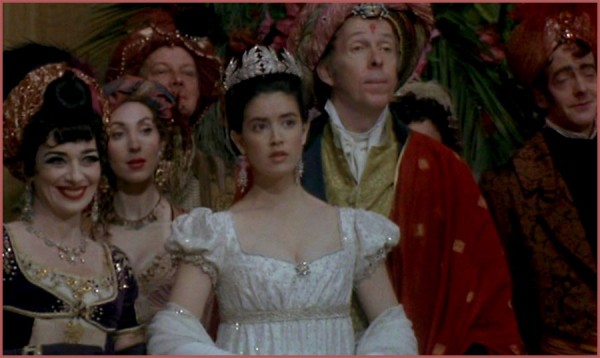 Caraboo gets some truly to-die-for jewelry in this film, including this beautiful diamond leaf tiara. 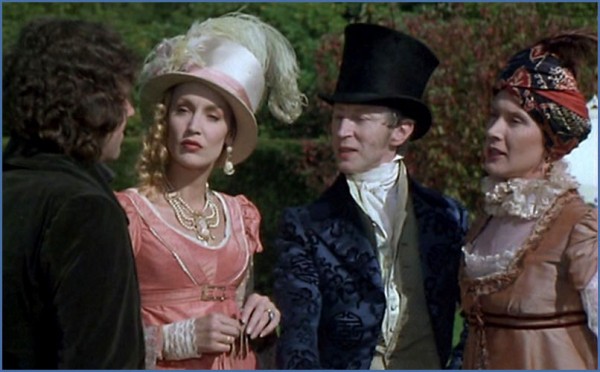 Yes, that is, in fact, Jerry Hall, the former Mrs. Mick Jagger. 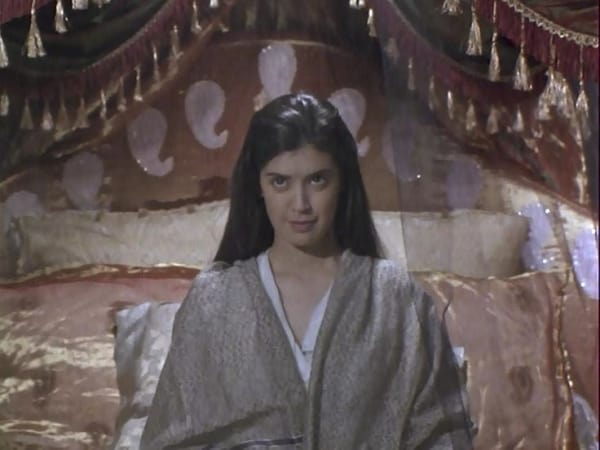 See if you can spot the number of Asian and Islamic references in the film! 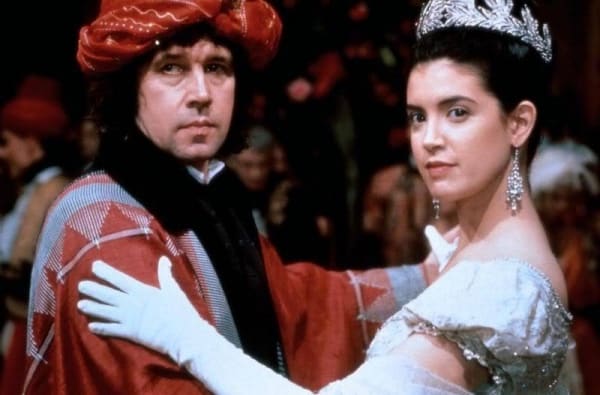