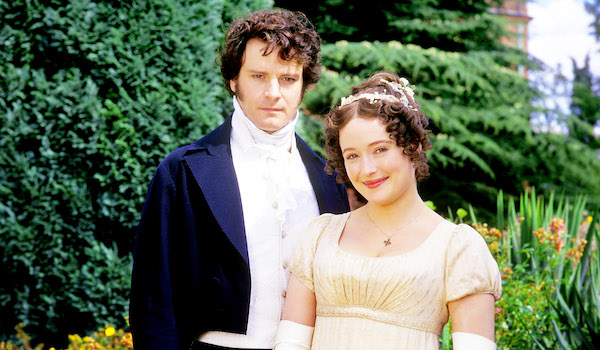 This is the 20th anniversary of the beloved 1995 Pride and Prejudice miniseries, so we’re looking back at that version and Jane Austen’s world. This is the first of many posts about this classic adaptation!

I’m always surprised when I run into people who look at me like I have three heads when I mentioned how awesomely feminist Elizabeth Bennet is.

“How can she be feminist?” The always ask. “She flat-out admits that she falls in love with Darcy because of his house.”

And that’s exactly my point. She decides that maybe Darcy isn’t so bad once she has a chance to lay eyes on his sizable grounds at Pemberley, and doesn’t feel any guilt about it. 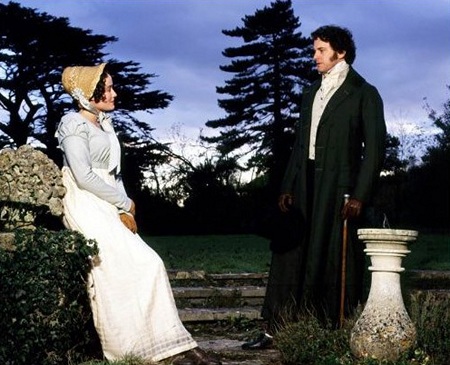 You know what they say about men with big houses…

Pride & Prejudice is not without its modern feminist naysayers, but nor is it without its feminist defenders. A quick look at Google reveals over 26,000 scholarly texts on the feminist aspects of Jane Austen’s work, so clearly we are not out on left field with the argument that there’s some serious feminist theory invested in the characters, plot, and the author of one of the most beloved novels of all time.

Of course, the difficulty with applying feminism to Jane Austen’s body of work is that she lived in a proto-feminist world, where our modern concept of what it means to be a feminist did not exist. That said, as we can tell from her letters and her novels, Austen was familiar with, and to some degree identified with, the “rational woman” put forth by her contemporary, Mary Wollstonecraft. Forgive me for being massively reductive here, but the radical departure between the feminism espoused by Wollstonecraft, and the application of said feminism in Austen’s writing is that the former went so far as to reject marriage, while the latter chose to embrace it (at least as far as her characters were concerned). 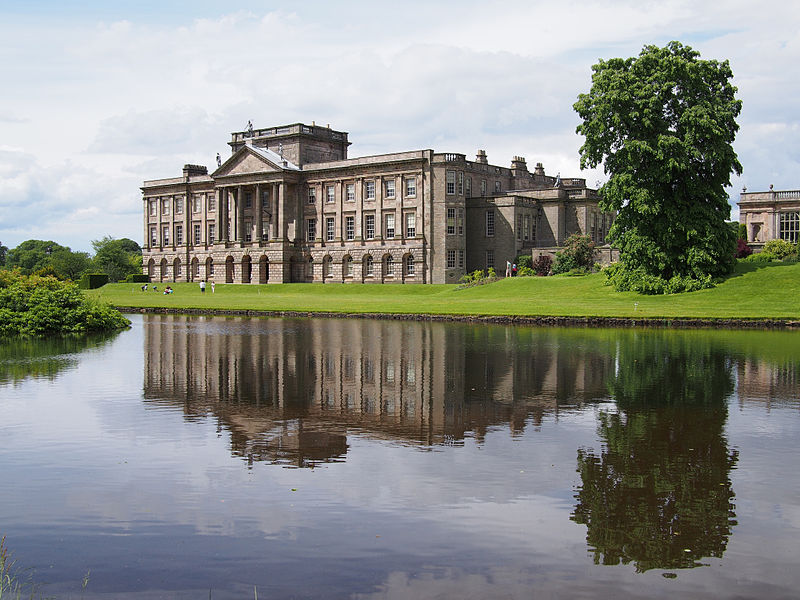 Come on, admit it. You’d marry him too.

What I find so fascinating about Jane Austen’s female characters is exactly rooted in their enthusiasm, skepticism, and even reluctance regarding marriage; these fictional women all realize the necessity of it in order to secure not just their fortunes, but their independence. Like, why is that a bad thing? Why do we modern feminists get so distraught about the implications of Elizabeth’s incredibly practical decision that Darcy is her ticket to an actualized life? In my opinion, Elizabeth Bennet confessing to her sister that she did not love Darcy until she saw his fabulous property is less a confession that betrays her feminist nature, than a statement of rational thought. As the most intellectually gifted of the Bennet sisters, she is under no illusions that a bad match is worse than no match, but that true freedom lies in the right match. In Fitzwilliam Darcy, she has the ideal rational man, someone who respects her intellectually, and by the same token, her independence.

Jane Austen knew that in her time women rejecting marriage outright à la A Vindication of the Rights of Woman was not a realistic choice for all but the most elite women of her age, and even then it was not without serious social ramifications. She understood that in order to flourish within the patriarchal system of early 19th-century England, a woman was best off if she married, and even better off if she happened to luck into finding one of those new-fangled husband models who came equipped with the “R-E-S-P-E-C-T” unit installed. Darcy, though he is perhaps not the most feminist of Austen’s male characters (I’d argue that it’s a draw between Elizabeth’s father and Darcy’s counterpoint in Persuasion, Captain Wentworth), he is definitely drawn from the sketch Wollstonecraft laid down of the Rational Man in relationship to the Rational Woman. He sees Elizabeth for who she is and, unlike Mr. Collins who rejects her rationality out of hand, or Wickham who merely sees her as a conquest, Darcy doesn’t just fall in love with her, he falls in like with her. 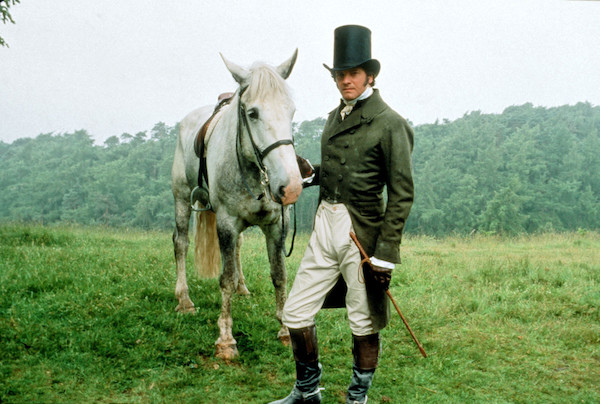 This is a picture of Colin Firth as Mr Darcy. It has little to do with the point I’m making here, but he does have a pretty nice horse.

Think about Darcy’s first botched attempt to confess his love to Elizabeth. He approaches it from a fairly typical masculine standpoint; he has a problem (he’s fallen in love with her) and he has to do something about it (propose). He even claims to be “a rational man” but only up to the point where his feelings run into his family’s expectations. This is Darcy misunderstanding what “rational” truly means, that it isn’t simply living by a series of social equations where emotion and feeling are subverted. It is seeing your partner as an ally and equal and in that, finding true happiness. Darcy has realized only that he loves her, but he has yet to like her. Liking her comes gradually, until by the time she is traipsing across the lawn at Pemberley on holiday with her aunt and uncle, it has dawned on him that Elizabeth is not just worthy of his love, but worthy of his friendship and respect (or as Austen calls it, “esteem”). And friendship can only happen when two people respect one another. 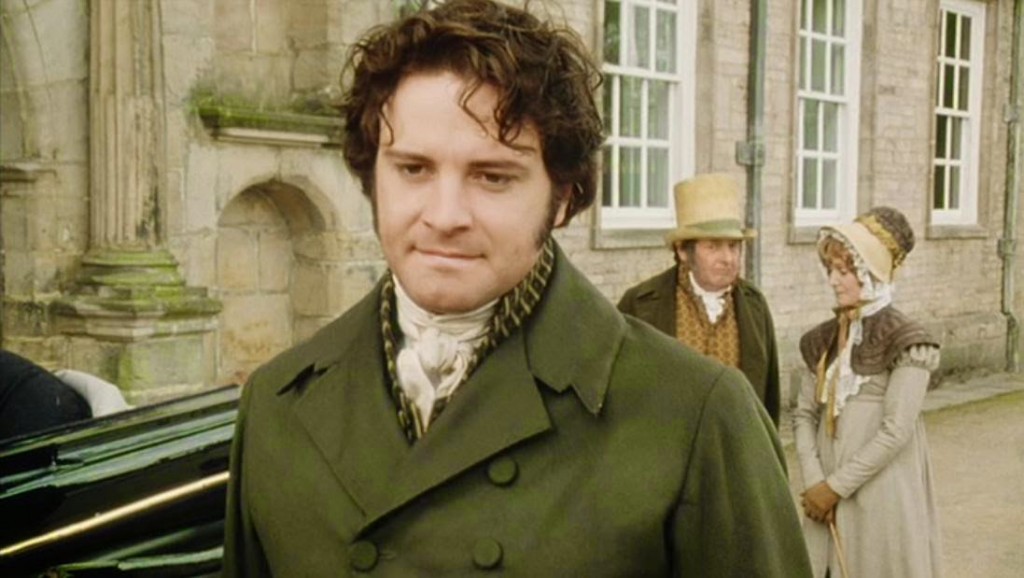 That, right there, is the face of a man who is ok with being in love.

That’s not to say there aren’t other examples of female agency in Pride & Prejudice (stay tuned for Trystan’s essay on why Lydia Bennet is actually a feminist icon), only that as the story’s central characters, Elizabeth and Darcy are the ideal Rational Couple. Though the cynical argument is that she hitched her wagon to Darcy’s ten thousand a year and rode it out of Spinsterville, I think that within the construct of the story and the era it was written/based in, with an author who knew that her heroine was a little edgy when compared to other contemporary heroines, Elizabeth comes through the pages as a relatable, and dare I say it, realistic feminist heroine. She is not rebuking suitors left and right because she needed a man like a fish needed a coach-and-four. She is also not holding out for the impossible, flawless man who, let’s be clear here, Darcy really isn’t. She weighs her reactions before acting, and her opinions, though seemingly carelessly given, are calculated to provoke thought. Most of the characters that surround her only react with bewilderment or annoyance, but Darcy doesn’t. If nothing else, he knows she is her own person, and though he may not understand why initially, he comes around to it eventually.

In closing, this article inadvertently owes a lot to the essay “Feminist Implications of the Silver Screen Jane Austen” by Devoney Looser, which was published in the excellent book Jane Austen in Hollywood. If you’ve, say, stumbled across this article in an attempt to find actual scholarly sources to cite for a school paper (it could happen!), or you are in the mood for some juicy academic explorations of feminism and gender politics at Pemberley, I highly recommend getting your hands on a copy.

Thoughts about Jane Austen’s Pride & Prejudice? Tell us in the comments!