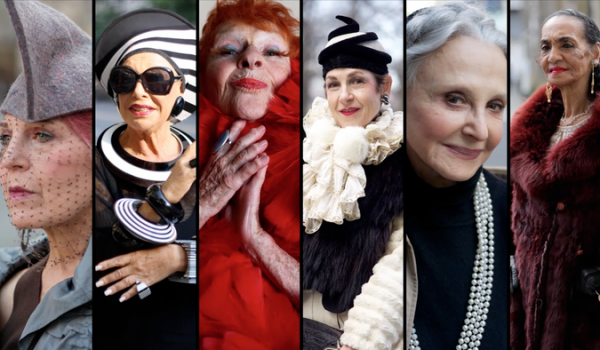 Having been an occasional reader of Ari Seth Cohen’s blog, Advanced Style, I have been looking forward to the documentary Advanced Style since I first heard that it was being filmed, way back in 2012 or so. Turns out, it’s finally got a release date: September 26, 2014. Ari found an untapped well of inspiration in the look-good-feel-good-don’t-give-a-fuck attitude of older women, a demographic typically overlooked in all areas of our culture. Which is actually kind of a wonderful thing… When no one is paying attention to you, you can do whatever the hell you please with yourself. It’s a liberation I’m fully planning on embracing if I should be so lucky to make it to “a certain age.”

Hell, it’s got it’s appeal even now, though I am fully cognizant of the pressures on a woman in her thirties to conform to some kind of mainstream baseline in terms of fashion. What I wear is a personal marketing campaign. I have to be aware of who I’m portraying myself as when I’m out in the world if I want to be taken seriously. It’s not just a matter of throwing off the expectations of a culture and saying “I’ll wear what I want!” Because, honestly, I need to maintain some kind of professionalism in my clothing or else I run the risk of being blown off.

Also, if I were allowed to wear what I want, I would probably just live in pajamas and a tank top. Not exactly the rallying cry of rebellious fashion, I’ll admit.