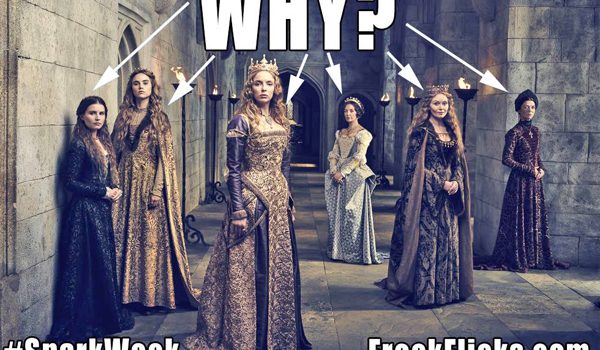 The White Princess hasn’t even premiered on Starz and I want to punch it in the face. Or at least punch the headline writer at Harper’s Bazaar who wrote this: ‘THE WHITE PRINCESS’ IS THE FEMINIST ANSWER TO ‘GAME OF THRONES.’ (And note, it may or may not be the article writer, Julie Kosin; I’ve worked at enough publications to know that heads get written and rewritten 80 times by the copy editors and managing editors before a piece gets published, in print or online).

Anyway, the casual labeling of any work of fiction with a female in the lead — or gasp multiple female leads! — as feminist is so fucking sloppy and tired that it shouldn’t piss me off, but when it’s in relation to what looks like a total schlockfest follow-up the barely watchable The White Queen (2013), I just can’t let it go. Gather round and Old Lady Trystan’s gonna break it down about what makes for decent feminist storytelling as it pertains to historical costume movies and TV. Pour yourselves a Pink Drink, you might need it.

First of all, a reminder that “Feminist” simply means the radical notion that women are equal to men. That’s it. Not better or should be protected or can’t be criticized or harmed, just equal. Whatever men get, women want it too. And whatever women have to endure, so should men. Rights is rights. OK, got that? Let’s move on.

So for a feminist storyline, all you need is for the female characters to have as much agency as the males. Note, I didn’t say screentime (being that we’re talking about movies and TV). The story determines screentime — a biopic of Winston Churchill means more of that dude on film than his mom or wife, right? Likewise, a biopic of Queen Victoria should show more of her than Albert. When I say “agency” I mean that the female characters should get a chance to make their own actions and choices as much as any male would in the same situation.

Mind you, in a historical setting, female agency will be tempered by what is factual to the period. This is why we had problems with the “lady doctor” character in Versailles (2016) and the “lady gardener” in A Little Chaos (2015). In the time period and place of those films (both 1670s-ish at the court of Versailles), women would not be allowed to take on these roles. Sexism is historically accurate, unfortunately. Not saying “yay sexism,” but I am saying if we’re going to nitpick the costumes and other parts of the storyline for historical accuracy, we can’t ignore retroactively removing sexism. There are ways modern movies and TV can comment on historical sexism without glossing it over.

Back to agency — even in a sexist historical setting, female characters can express agency and often do in ways as small as their fashion sense to as large as their choice of husband or refusal to marry, for example. Think of our faves, Elizabeth Bennet in Pride and Prejudice, who refused to marry Mr. Collins and held out for a better match, or Queen Elizabeth I, never marrying at all.

Now, what about The White Princess? Why does this irritate me so? Because Harper’s Bazaar seems to conflate “feminist” with “there are six women on the show” and “the story is about women fighting.” Based on this article, we don’t know shit about the feminist cred of this Starz series (although we do know it’s full of super shitty history, which should come as no surprise to anyone). Save the analysis for an actual show review, not a photospread, m’kay? 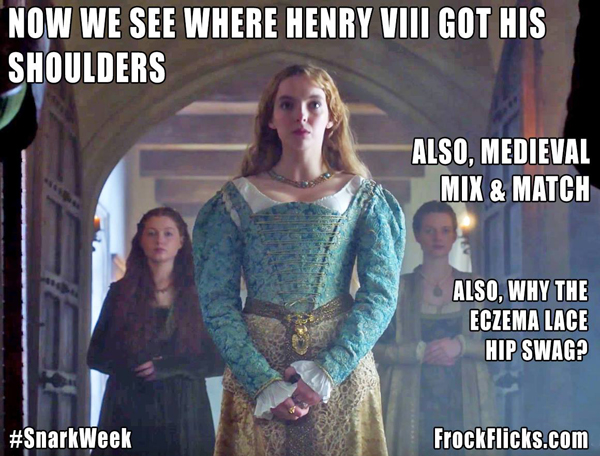 Showrunner and writer Emma Frost says: “It’s never been more timely for a show about powerful women carving out their own destinies.” Which is true, but who the hell knows if The White Princess is that show. The female characters in it were part of politically arranged marriages, so I’m not sure how they were “carving out their own destinies.” I would love to be proven wrong, but:

Yeah, it’s pretty hard to take this show as some kind of deep historical appraisal of women’s roles and relationships in the early Tudor court. I’m guessing it’s going to be more like cliched catfights and bed-hopping, all draped in poly baroque satin. If you want that, fine, enjoy the trashy fun, just stop calling it “feminist.” I’m not saying it’s necessarily anti-feminist, that remains to be seen, but having multiple queens in it doesn’t mean it’s automatically feminist. Hell, RuPaul’s Drag Race is better qualified on that count!