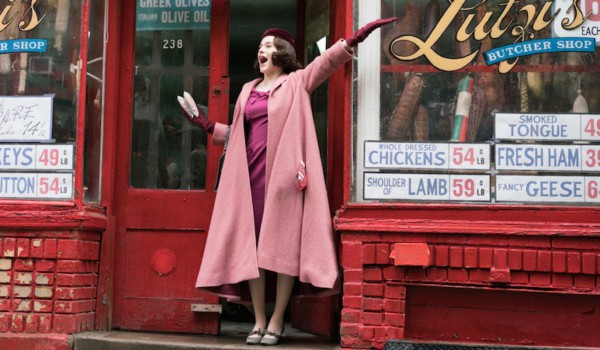 Are you watching The Marvelous Mrs. Maisel on Amazon? It’s the story of a young, upper crust, Jewish woman who gets dumped in 1950s New York and embarks on a career in standup comedy. It sounds like kind of a quirky premise, but that will make more sense when you realize it’s created by Amy Sherman-Palladino, the creator of Gilmore Girls and Bunheads (RIP to both!).

I’ve only made it through the first two episodes and already I am DYING over Midge’s wardrobe. The good news is there’s been a ton of press about the costumes, which were designed by Donna Zakowska (TURN: Washington’s Spies, John Adams, Original Sin) and are catching everyone’s eyes:

While I’m sure there are lots of fab outfits I’ve missed, let’s battle it out for which of Midge’s costumes you’d most like to run off with! Me, I’m gunning for the green dress with the ivory swing coat (LUST), or the Red Dress from dinner with Joel and all the parents.

What are you thinking of The Marvelous Mrs. Maisel?