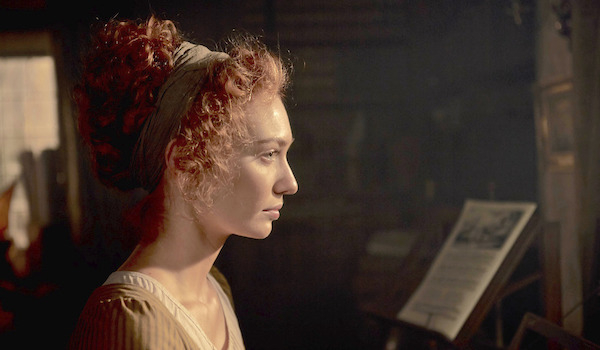 Ah, Poldark. Manly Aidan Turner brooding and scything. Lovely ladies in elegant dresses and … wait, WHAT’S GOING ON WITH THEIR HAIR? Yes, it’s part 2 of my rant about the hair in BBC’s Poldark, 2015! (Missed part 1? Read that first, because this is mostly going to be chatty, not research-y. Part 1 has all the research!). Today, let’s talk about Demelza and that ball scene and the lower-class ladies.

First, Demelza! She starts as a ragged person of indeterminate gender and blossoms into a lovely lady, and along the way, she actually ends up with more historically accurate hair than anyone else in the series! Okay, it’s still up in back, but the silhouette — and, particularly, the various ways she wears ribbons in her hair — are far more accurate to the late 18th century than anyone else. Okay, so it’s probably more 1790s than 1784-5, but I’ll take it. Part of me wonders why her hair is more appropriate than Elizabeth’s, but I guess we’re supposed to see Demelza as more romantic, so she goes tousled while Elizabeth goes structured.

But apparently Kendra isn’t allowed to be TOO happy, because after spending a number of episodes with Demelza’s hair making me feel like this:

She goes from being a rag-wearing urchin to being Mistress Poldark … I particularly wanted Demelza to look practical… her transition into a lady is much slower … we gradually change her look and make her hair more classic, and as she got grander she wore it down and free [bolding mine]. Poldark: Interview with Eleanor Tomlinson who plays Demelza in the new BBC dramatisation

LISTEN, DESIGNERS. IN THE 18TH CENTURY, SMALL CHILDREN WEAR THEIR HAIR DOWN. Remember reading Little House on the Prairie? Or Rebecca of Sunnybrook Farm? I assure you, they all had a scene where the protagonist was Super Excited because she got to start wearing her hair up which meant she was An Adult Now. Okay, so those are 19th century, and my memory is fuzzy, but whatever. If not in those books, then in something!

Thankfully at the ball, Demelza puts her hair back up and accessorizes it with a pretty yellow ribbon, allowing me a moment of respite from the flowing locks: 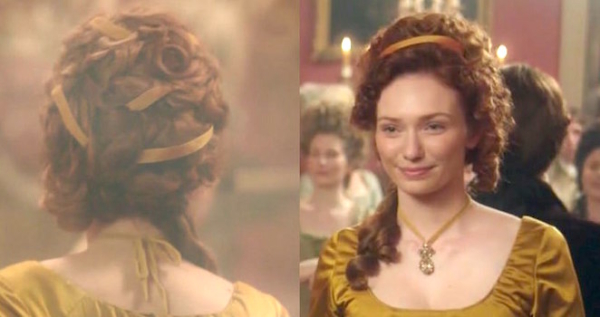 Also at the ball, George Warleggan gets his wig ON like Donkey Kong! The guy is dapper as hell in this fabulous number. He may be a twit, but I’d happily run off with him if he promised to keep wearing this wig. 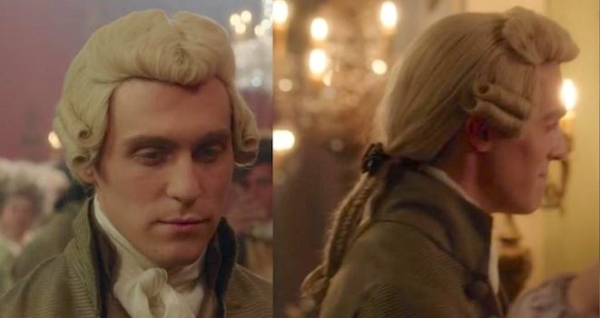 Powder! Short on top with a fabulous rolled-towards-the-parting! Side rolls! TWO braids in back! Be still my beating heart!

I did have a good time, however, checking out the hairstyles on the extras. Now, at least everyone’s hair is up, which I guess we should be thankful for. And, all of the hair looks “18th century” even if it doesn’t look like anything anyone REALLY wore in the period. Some of it looks stupid, and some of it actually pretty, so I’m not sure if we’re winning or losing here: 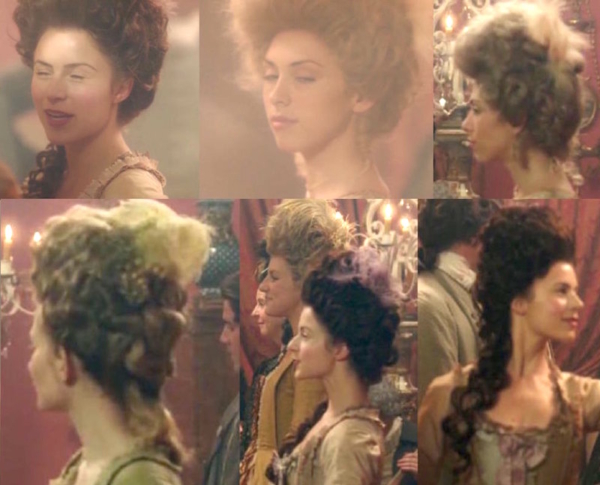 Aunt Agatha pretty much always rocks the shorter, curly, slightly puffy hairstyle covered by a cap (see the left-hand picture below). But I’d like to give major props to the hair designer who styled Aunt Agatha’s hair for the Christmas party! Instead of tousled curls, her hair has been put into organized curls in the “tête de mouton” style. This French term translates as “sheep’s head,” and it was the name of a hairstyle popular in the 1750s and 1760s, which consisted of rows of organized curls worn from ear to ear, perpendicular to the hairline. Again, this places Aunt Agatha’s style apogee in the 1750s to ’60s, which coordinates with her wardrobe, and is perfect for an elderly lady hanging on to “her” style! 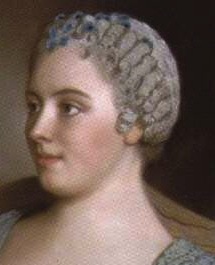 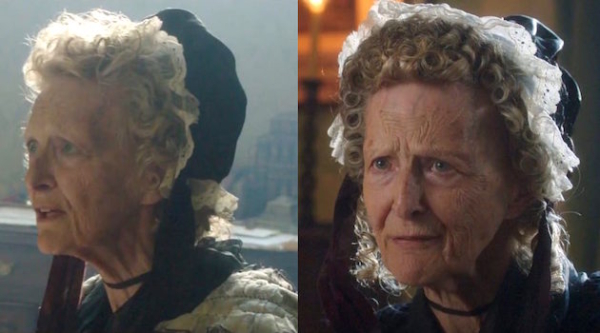 Now, let’s look at the lower-class ladies. I’m not going to get in-depth into each character — instead, I want to touch on just a few points.

First, our saucy minx Keren. You know she’s not all straight and narrow — why? Because of her perma-tousled hair! I go back and forth on whether or not this works for me, historically speaking. It’s AWFULLY messy and in the period, she’d probably be seen as crazy and/or a total slattern. But it does work, cinematically, to let the viewer know that Keren isn’t really concerned with appearing proper. 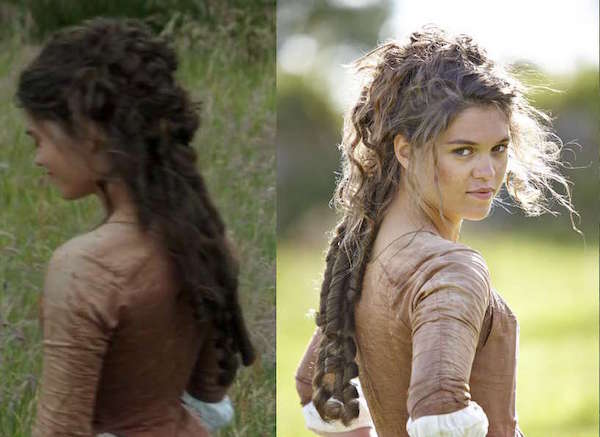 Let’s pause to appreciate her fabulously ridiculous OTT wig that she wears for the theater performance. I love it! It’s like Elizabethan on crack. 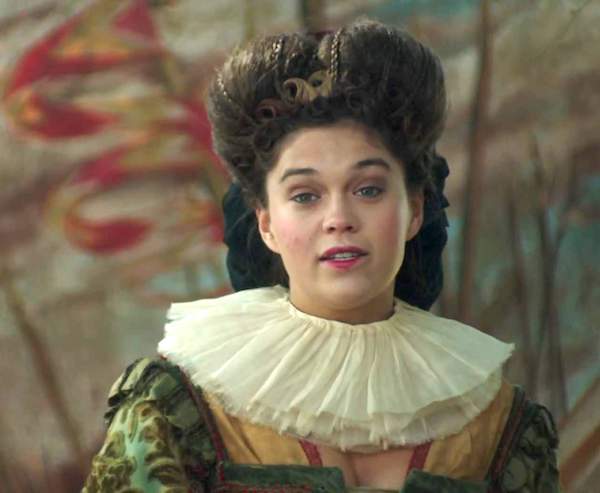 Finally, let’s look at the real down-and-dirty poor ladies. First, I’d like to show you a compilation of images of lower class ladies, most of whom are from artworks that are actually painted/drawn/set in Cornwall. Okay, probably many of them are romanticized, but at least half of them seem to be going for a gritty look. Let’s look at them and count just how many show 1) the hair worn completely down, or 2) the hair worn messy, with lots of strands and tendrils hanging out. I count two messy styles, and all the rest look pretty well up and organized.

Now, let’s compare that to Poldark‘s poor women, who have hair ALL OVER THE PLACE. I swear, if you stripped them down, they’d have hair on the soles of their feet — that’s how much messy, stringy, tousled hair is hanging around. I particularly love the second image from the left, with the hard-living fisherwomen staring out to sea. I’ll bet they can’t wait for the fish to come in, so they can get allll that hair in their eyes/mouth/face/etc. while they slice out fish guts!

What did you like when it comes to the hairstyles in Poldark, and what made you groan out loud? Share in the comments!