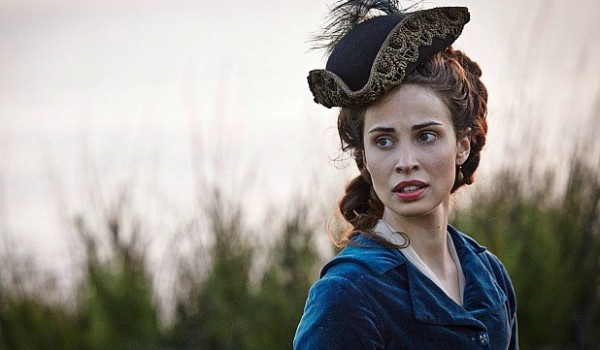 Poldark. It’s probably the current TV show that should be most up my alley, being set in the late 18th century (my favorite era of all time). And in some ways it’s working for me, and in others, it’s not. I’ve been watching Poldark (2015) on British time (read, I’m not done but I’m farther along than most of you are), and now that the first episode has aired here in the US, I can finally ask: WHAT’S UP WITH THE HAIR?

This has got to be part 1 of 2 posts, because I have more thoughts on this as the series progresses, but I don’t want to spoil anything. So I will try not to get into any plot points beyond episode 1 (although I may include a few, non-spoilery images from later episodes, just to make my point).

What Era Are We In?

But that being said, we are looking at General Late 18th-Century Hairstyles here, not early, mid- or later 1780s. Our ladies are in “18th century” updos:

Verity. I have no idea.

What SHOULD the ladies be wearing? Well, if it’s 1783-4 and they’re cutting-edge fashionable, then it should be big, frizzy styles that are wider than they are high: But you’ll say, “Cornwall! Middle of nowhere! Gentry that is struggling financially!” Okay then, how about we backdate to about 1780?

There were three main styles fashionable in England around 1780:

1) Straight-ish, loose-ish, with height on top: 2) High on top in a triangular or hot-air-balloon shape: 3) The frizzy style that’s going to be popular mid-decade, and which you can see above, but generally taller than wide: And what about the men?

A range of styles on some of the older men.

Now, this isn’t such an issue for the men. 18th-century men, particularly in England, tended to wear “fossilized” styles that were representative of their class, station, or profession. This is a big reason why men wore wigs in the first place. A style might be fashionable in the 1720s, but hang around through the end of the century as THE style worn by, say, doctors.

For example, this gent is wearing a style that was fashionable in the 1730s, but clearly he’s an older man (who wasn’t even born in the 1730s). He’s wearing a “physical” wig as an indication of his profession: a clergyman. So this wouldn’t be such an issue, except that NO ONE is wearing a fashionable 1780s hairstyle. Yes, it’s Cornwall. Yes, even the gentry in this series are struggling financially. There still should be at least one character wearing a bushy 1780s hair/wig style. But let’s look at individual characters, and I’ll try to better explain:

In flashbacks, Ross’s hair isn’t bad. It’s wavy and long enough to go into a queue (a hanging tail, here tied with a black bow, which was very common):

But now he’s back, and he’s broody, and he’s chopped off his hair into some kind of man-bob: Now, the 1780s is when a lot of things went out of the window, what with the whole effects of the Enlightenment and coming French Revolution to shake everything up. There was a big trend for “naturalism” in fashion, which translated into less wig-wearing for the younger set, and shorter, more disheveled hair. And clearly Ross is a forward thinker. So his lack of wig checks out, and I can even forgive his lack of queue (ponytail). But somebody send him to the barber for a trim, because that man-bob is just out of control!

More along the lines of how someone like Ross would be wearing his hair in the 1780s: The Rev. and Mrs. Thomas Gisborne, of Yoxhall Lodge, Leicestershire, by Joseph Wright of Derby, 1786 | Yale Center for British Art

I think what they’re going for is something like this, although note this is still a lot shorter: Ross’s true wuv has some seriously wack hair moments. I can live with her updos:

Elizabeth on the right.

Even if the back of her hair is seriously Modern Bride:

The pearls! Quick, someone pin this to your Wedding Ideas Pinterest board!

What SHOULD the back look like? There should be a portion, from the crown to behind the ears, that’s long and straight (at least at the roots). Yes, it could be braided, or put into a ponytail, or in ringlets, but it’s not worn up, Modern Bride style. (Yes, this image is French, but sculpture busts are the best source for hairstyle info!). But honestly what KILLS me is when she’s hanging out at home with most of her hair down, and just the front up. I picture that there’s a barrette up top there.

She does this. A LOT. Ross’s cousin is supposed to be a plain Jane, so it makes sense that they try to give her dumpy hairstyles. (Although as always, I am peeved on her behalf — she’s lovely! And very cute! But I think that’s the point, we’re supposed to see in her what her family doesn’t). But I’m not sure if her ‘do is Victorian or 1940s!

From the front, it’s weird but not egregiously so.

But the back? WHAT THE HELL? She’s got a braid wrapped around her head, and then her hair is wrapped up around the braid at the nape of the neck.

It reminds me of one of those 1940s scarf-rolls: (Kind of like “Thomas the Baker,” but different. Maybe she comes from a long and distinguished line of Cornish prostitutes!). You only get a glimpse of her in episode one, but I’m not spoiling anything by telling you that 1) you’ll see more of her, 2) she’s gorgeous, but 3) those goth-y magenta streaks in her hair are FABULOUS but SO 1990s:

You think I’m kidding, don’t you? That’s a ribbon in her hair, you’re thinking!

Oh ye of too much faith.

THOSE ARE MAGENTA STREAKS. They’re FABULOUS. But they ain’t 18th century. (From a later episode, but I’m trying to show you the magenta).

But Wait, There Are Things I Liked!

Most of the men’s wigs were GREAT, if you ignore the fact that none of them have a 1780s look to them (see above; perfectly plausible in the individual, just not as a whole).

There’s a nice variety in men’s wig styles as is appropriate. Ross’s banker is wearing a turned-under-on-top style.

Love that the men who wear wigs hang out in caps at home. Here’s Carly Warleggan, scheming.

I like that a few of the older men, and most of the young, aren’t in wigs. This is an era when the younger, more liberal, and more fashion-forward started to forgo wigs.

Aunt Agatha is wedded to her caps, which makes perfect sense: When she was young, caps were very fashionable, and she (like many elderly ladies) is hanging on to her younger hairstyle.

I’ve got lots more thoughts on other characters and developments, but those will have to wait until a few more episodes have aired!
What do you think of Poldark‘s hair choices?