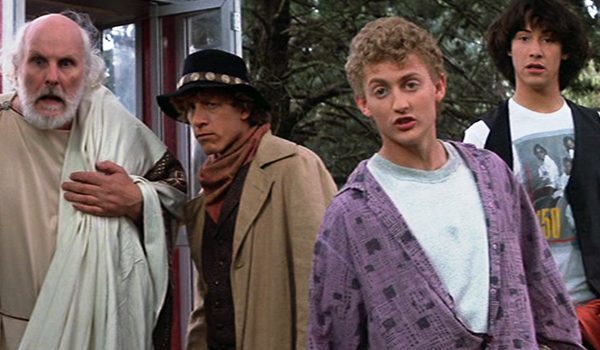 It’s been a while, but let’s return to an ongoing point-of-view series about movies playing fast and loose with history. Of course they do it, it’s not new, and it happens for plenty of logical and sensible reasons. Make sure to read the first two parts of this series (and the comments!) to see where we’ve gone with the topic.

Now, I’m going to look at why we may feel this is a problem. I mean, really, if it wasn’t a problem, Frock Flicks wouldn’t exist! We’d just watch The Tudors and Reign all day and love the heck out of it all, right? Yeah…

Historical costume movies and TV shows that play fast and loose with history really bug us. By “us,” I mean “a significant portion of Frock Flicks’ audience” plus the Frock Flicks staff. We get annoyed by a movie that says it’s set in, say, 1850 but the actors are wearing poly-baroque satin prom dresses and crappy Selix Formalwear morning coats instead of period-correct historical costumes. We cry foul when the new Tudor drama obviously uses stretch velvet and zippers and all the women’s hair is hanging straight down their backs. Just as bad, we swear a blue streak when a TV series claims to be based on historical characters but has a plot that resembles daytime soaps more than anything that really happened in the past.

But why does it bother us?

Movies and TV shows are just entertainment. They’re not supposed to be history lessons. We’re not in school. People go to the movie theater, tune in to TV, or download and stream a show for fun, in their free time, to kill a few brain cells. What’s the harm in watching something with pretty costumes and a silly storyline that riffs on history? Why does everything have to be so serious? Jane Q. Public Movie Viewer doesn’t give a crap about period hairstyles or historical dates, she just wants to to be entertained! (And in Part 2 of this series, I explained how movies and TV shows are big business, and people produce them for reasons that have nothing to do with historical accuracy).

In Part 1 of this series, I talked about how the public tends to see history as boring due to various factors. And how we here at Frock Flicks are obviously not part of that general mainstream audience with Jane Q. Public. Apparently, we demand something different from our entertainment. So much so that it really irks us to see historical costume movies and TV shows that get history wrong. Let’s look at some of the reasons why and consider if this does or does not hold water.

“They” being the filmmakers, collectively the directors, writers, producers, costume designers, actors, and studios, of both movies and TV — they think we, the audience, is too stupid to notice the history is wrong. Or we’re too stupid to tell the difference between their movie’s version of history and the real thing. Or maybe we’re so stupid, we can’t handle the truth. I’ve seen variations of this refrain of “they think we’re stupid” or “they’re insulting our intelligence” in many fans’ complaints when movies get the history wrong.

But this assumes a level of calculation on the filmmakers’ part that just doesn’t sit right with me. Movies and TV shows are big businesses, and like any other business, multiple people have input along the way and are required to give sign-offs. Various stakeholders will get their say on the final budget and the overall production design — and you can bet that not all of those folks are historical experts. So if you’re looking for “stupid,” you might well trace it back to the business that thought historical costumes for a thousand extras on shoestring budget would be easy.

Now, if you really feel a movie or TV show is talking down to you, of course, don’t watch it. But I’ve found that stupidity comes through more in a production’s writing than in bad historical costumes. There are definitely movies and TV shows that think we’re stupid, there are whole categories of movies and TV shows that revel in being stupid for stupid’s sake (think of teen-exploitation flicks, stoner films, the Farrelly Brothers’ movies). But it’s not typically about history or costume.

Then there are comedies that use history and costume as a joke on purpose, such as Mel Brooks’ History of the World, Part I (1981). It’s a pretty smart movie that assumes you actually know history — you’re not going to understand some of the jokes if you don’t. Ditto the beloved Monty Python’s Holy Grail (1975) and Life of Brian (1979). While you can laugh along with them if you don’t understand, say, Marxist theory or Latin grammar, the jokes are funnier if you get those references. Likewise, the series Another Period (2015-) purposefully mixes tropes from reality TV with a Downton Abbey-ish construct for comedic effect, and the costume designer knows what she’s doing in creating outfits for characters that are both of a historical period but act in totally modern ways. 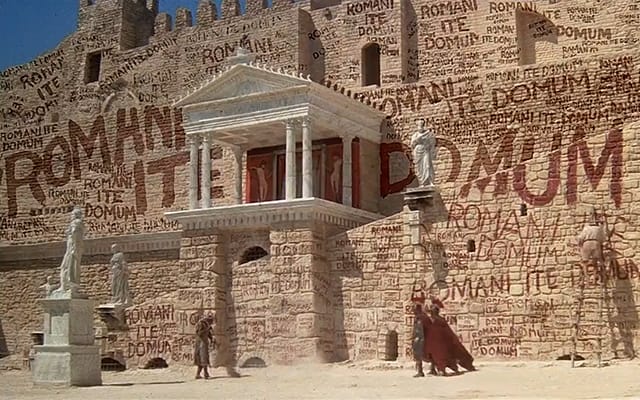 People Will Get the Wrong Ideas About History

In our podcasts, we compare how a movie or TV show depicts historical costume versus how the historical clothing would have actually been worn in the era. And if it’s a historical story (like Elizabeth, 1998, or Marie Antoinette, 2006), we discuss how the plot compares to actual historical events. We do this because we’re interested in the comparison, and we hope it’s helpful to our listeners who may not know as much in-depth history about each topic we’re covering. That said, I don’t think it’s the job of any of these films, or any other historical costume movie or TV show, to teach you about history.

Now, it is true that the images of history that movies and TV present can stick in people’s minds. Research on memory and perception suggests that, essentially, the more you repeat a lie, the more people will believe it as the truth. Whether that lie is “George Washington had wooden teeth” or “Saddam Hussein had weapons of mass destruction,” the result is the same — people get the wrong ideas about the past stuck in their heads.

Yeah, it does suck that movies and TV might be one of the main sources of historical education for a lot people. Because even the most perfectly historically accurate show will never be as comprehensive as reading a well-researched book about the topic or going to a museum of objects from the period or going to a well-preserved historical site or basically learning about the topic for yourself.

I freaking LOVE the BBC’s 1971 series Elizabeth R. It was hugely inspiring to me growing up. But, even though it’s longer than a two-hour movie, it’s only six hours and still truncates the events of Queen Elizabeth I of England’s life. Almost nothing about Elizabeth’s childhood is shown, so the series doesn’t give much background context for her and Dudley’s relationship, for example. I learned about that from Allison Weir’s biography and other books on the period.  (The amazing An Historian Goes to the Movies has a series of blog posts detailing exactly why NO filmed production can ever be historically accurate — I highly recommend you read it if, like us, you’re into bitching about historical accuracy on film!)

OK, so sins of omission are not as great as sins of commission. What about all the kids today who think that Mary Queen of Scots is a willful, dark-haired girl in Alexander McQueen gowns, shagging a curly-haired blond guy? Is that so wrong? Shows like Reign are obviously intended to be pure entertainment, with a bit of historical set dressing.

The Reign audience is teen and 20-something girls who adore the romantic fantasy of being a queen, marrying a king, living in a castle, wearing fancy clothes, and having all kinds of exciting things going on in your life. I perused Reign fan forums, Facebook pages, and Twitter (the things I do for Frock Flicks), and found that these fans love the hell out of the show, love the characters, love the stars, and really don’t think of the history at all. It’s like a fairy tale for them, except it has an air of reality because they’ve heard some of these names somewhere. They might also watch pure fantasy, such as Game of Thrones, but the idea of a queen in her own right who actually lived once upon a time and ruled two different countries, with a claim on a third? Wow, how cool is that! The story is custom-made for a soap opera.

And you know what? There may be a small portion, just 1%, of that audience who loves a show like Reign (or The Tudors or Point of Honor or whatever other totally inaccurate historical TV series or movie) and gets turned onto history. They’ll use that as a jumping off point. People do it with fantasy all the time. I’ve seen it with Tolkien, Narnia, and Game of Thrones. The Society for Creative Anachronism was started by Tolkien fans mixing fantasy with the Middle Ages, after all. Some people in the SCA get more historically accurate, while others stick with the fantasy side. Maybe some of those Reign kids will get hooked on Renaissance faires and eventually make their way towards researching the actual history for themselves. Or maybe they won’t. Is that so wrong?

It’s true that even bad historical costume movies can lead to positive results. We all love to hate on Braveheart. It was every historical costumer’s favorite thing to hate before Reign. But damn, that flick was good for Scottish tourism! In 1996, right after the movie’s premiere, Scotland counted at least ₤7 million to as much as ₤15 million in tourist revenue traced back to that movie. People interested enough in a flick to actually travel to another country might just pick up a book on the topic and figure things out for themselves — let’s face it, that level of interest is more akin to Frock Flicks’ audience than Jane Q. Public who’s watching movies for a jolly night out. So if an utterly crap historical film like Braveheart can inspire a deeper understanding, imagine how more accurate productions can serve as inspiration for learning and investigation of history.

Teachers/Historians Have to Correct Bad History

This should be a subset of the last objection, but I’ll call it out specifically because we hear it a lot. Historical costume movies and TV shows that get it wrong mean teachers, historians, and everyone who works in history-related fields have to deal with people getting mistaken ideas about history.

Frustrating? Sure. Annoying? Yep. But you know what? If you’re a teacher, historian, or otherwise work in a history field, you are an educator, and I believe this is what’s called a teachable moment. Hi, we built a web empire around this concept, you’re soaking in it. We do it with a side-helping of snark, and I realize that may not be suited to your situation, but find your niche! Consider this your personal challenge. Remember, there could be a germ of history interest in people who get it wrong due to movies and TV. They watched and paid some measure of attention if they’re parroting back a nugget of historical myth. Think of it as a cry for help. Send ’em a lifeline.

OK, these are just some of the biggies I’ve heard. Why does movies playing fast and loose with history bother you?