Our occasional series about history’s most interesting people who have been overlooked by Hollywood. See also our articles about Renaissance women, Medieval women, and 18th-century women who need movies made about them. We’ve also also nominated Rose Bertin and several of Henry VIII’s wives for specific screen treatment. 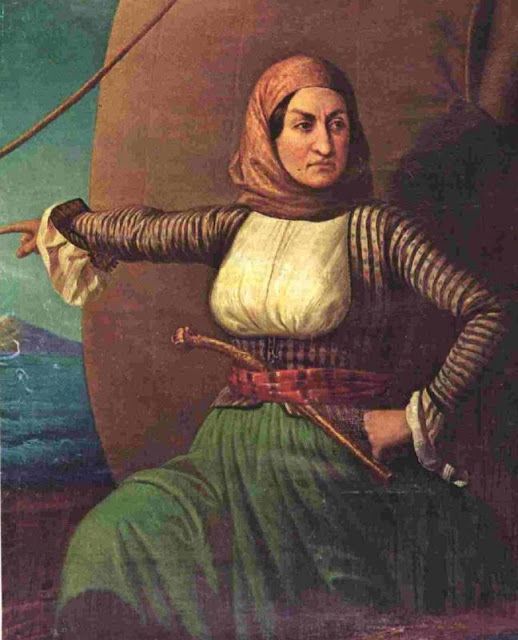 Sayyida was legitimately a pirate queen, being both a pirate and an actual queen. She was born in Granada, but fled to Morocco when Ferdinand and Isabella conquered it in 1492. By the time she was 16, she had been married off incredibly well to the Governor of Tétouan (who was 30 years her senior), and the two forged a partnership with Sayyida taking an active role in their business dealings. Widowed in 1515, she then married Ahmed al-Wattasi, the King of Fes. The one abiding passion in her life, however, was seeking revenge on Spain for the conquering of her native Granada. So, she did the logical thing and turned to piracy, striking an alliance with the powerful Turkish corsair Barbarossa of Algiers in which they raided Spanish ships, took Spanish prisoners for ransom, and generally made life as miserable as they could for Spain.

Despite having won respect from both her people and the world at large, Sayyida’s life ends on a tragic note. After a successful 30 year rule as Governor of Tétouan, her son overthrew her and stripped her of her lands and titles and … Well, we don’t really know. For someone who was so highly regarded during her lifetime, her death went unrecorded. Wouldn’t it be cool to give her back some of that fame by making a movie about her? 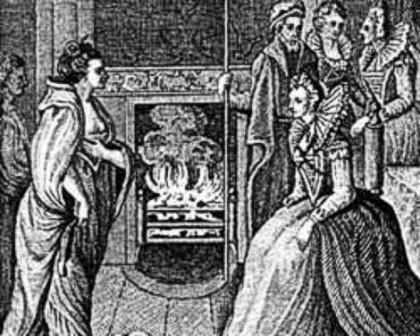 Also known as Grace O’Malley, she was a highly educated and independently wealthy 16th-century Irishwoman who inherited her father’s shipping business, and by that I mean “piracy business.” Gráinne is a major Irish folk hero, so it’s kind of surprising that no one has made a movie about her yet (although several acclaimed plays have been written about her).

Most of what we know about her is based in the myths and legends that sprang up during her lifetime and well after her death, but one rare example of a documentable exploit can be found in the story of  Gráinne negotiating with Queen Elizabeth I for the release of her two sons and half-brother, who had been captured by the English — a meeting that took place entirely in Latin, btw, since Elizabeth didn’t speak Gaelic and Gráinne didn’t speak English. 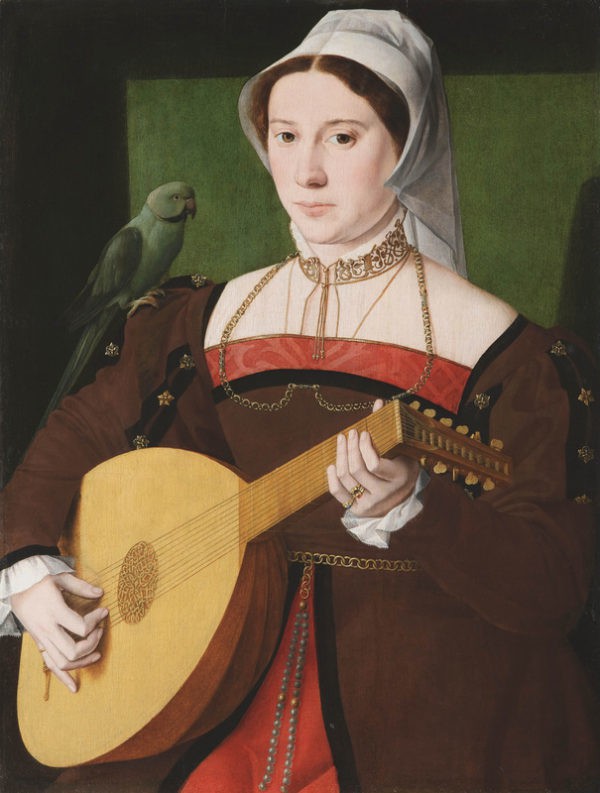 Ok, full confession, that portrait isn’t actually of Lady Killigrew, Pirate. But since there’s no portraits of her, I figured this one would do since it’s the correct era and she’s got a parrot on her shoulder. Anyway…

Mary Wolverston has the distinction of being considered a pirate, even though there’s very little evidence she ever set foot on a pirate ship. She was the daughter of a wealthy “gentleman pirate” and married Sir John IV Killigrew, who as luck would have it, happened to own a bit of land that King Henry VIII wanted to build Pendennis Castle on. As a thank you to the Killigrews, Henry bestowed the Governorship of Pendennis Castle on her father-in-law; the office then passed to Mary’s husband, and with it, the control of the Carrick Roads harbor, one of the major harbors in England at that time. Sir John exploited this by routinely picking off plum bits of cargo from ships that passed through his harbor and because of the teensy issue of legality surrounding the this sort of activity, the Killigrews both paid enormous sums to local officials to turn a blind eye to the operation. The piracy continued unabated until the 1580s, when the couple got wind of treasure aboard a Spanish ship that was moored in Carrick Roads harbor; Mary ordered the ship seized and raided, but the plan didn’t go smoothly. The Killigrew property was searched and stolen goods connected to the Spanish ship were found in their possession, so everyone was rounded up and arrested, including Mary, who was sentenced to death. She eventually received a pardon by Queen Elizabeth I and apparently faded away into obscurity, dying at some point thereafter. 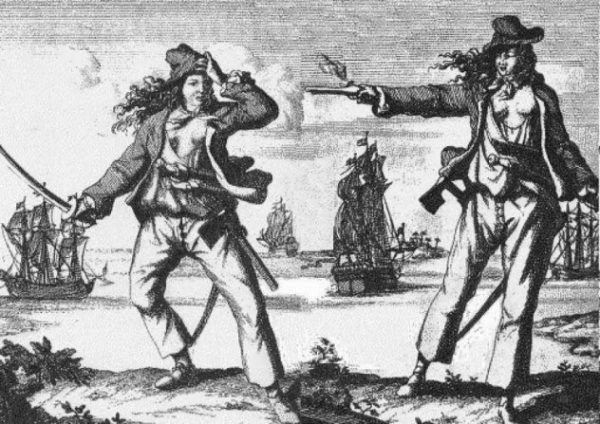 Go with me here: I know there’s a few old films about these two and Anne appears as a character in the show Black Sails, but I really want to see a modern film staring these two as the central characters.

Anne was a the illegitimate daughter of an Irish serving girl and an English lawyer. Her father took off to Ireland to avoid his wife’s relatives (who were probably not pleased with the whole lovechild thing), dressing Anne as a boy and calling her “Andy.” He later hightailed it to the Carolinas in search of better prospects, and apparently Anne resumed life as a female from that point on. Anne, who was described as a striking redhead, was considered a good marriage prospect until her temper got the better of her. She was disowned by her father after she married a poor pirate named James Bonny, and legend has it that she burned down her father’s plantation in retaliation.

Mary Read was also an illegitimate daughter who was also disguised as a boy as a child in order to continue receiving financial support meant to go to her deceased elder brother, Mark. Unlike Anne, Mary continued to pass as a man well into adulthood, joining the British Army and distinguishing herself in battle. Everything seemed cool, even after she fell in love with a Flemish soldier and was revealed to be a woman. After her husband’s death, she took up the male persona again and joined the Dutch Army, but peace was not as lucrative as war, so Mary hopped on a ship bound for the New World, where the stories of both women converge.

Mary’s ship was attacked by pirates whilst en route to the West Indies and Mary apparently found this lifestyle more to her liking, so, still passing as a man, she joined the pirates. John “Calico Jack” Rackham, notorious pirate and Anne Bonny’s lover, took Mary captive and eventually she became part of the crew of Jack’s ship Revenge. Both Anne and Mary apparently thought that the other was a man, so there was a bit of a mix-up when Anne developed a crush on Mary, and Mary was forced to reveal her true gender. Since turn about is fair play, Anne felt compelled to reveal that she, too, was a woman. Hilarity, no doubt, ensued. Calico Jack, meanwhile, didn’t get the memo right away and believed that Mary was a man who had designs on his Anne, but a bloodbath was averted when Anne revealed that Mary was a woman and everyone probably had a good laugh and/or a threesome.

Anne and Mary became forces to be reckoned with aboard the Revenge. When Calico Jack’s crew were too shit-faced to fight off pirate hunter Jonathan Barnet who had attacked the ship during a night of drunken partying, Anne and Mary single handedly (or double handedly?) attempted to defend the Revenge. Ultimately Barnet overwhelmed them and the crew was taken prisoner. Both women then “pleaded their bellies” in court in order to obtain a temporary stay of execution, since only barbarians would dream of executing a pregnant woman (a non-pregnant woman, however, was definitely killable). It’s believed that Mary died in childbirth while in prison; Anne’s whereabouts after her arrest and stay of execution is open to debate. Some say she was ultimately executed, while others believe she was ransomed by her father and given a new identity before being married off to a Jamaican official, subsequently dying of old age in her 80s.

Who’s your favorite female pirate? Tell us in the comments!