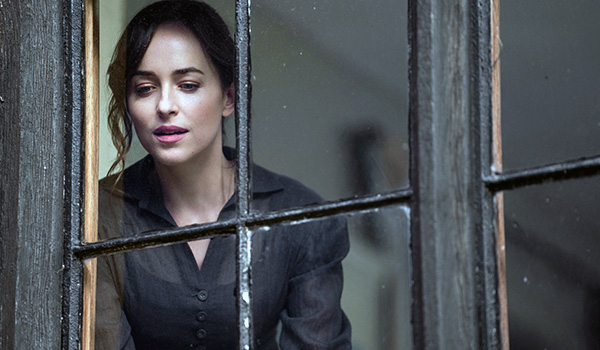 As the literary purist here at Frock Flicks, I fell on the grenade that is the Netflix attempt at Persuasion (2022). I was supremely irritated at the trailer when it threw out these bold claims:

And yet had zero actual Jane Austen content detected in the dialog, manners, and characterizations glimpsed therein.

Folks, I’m here to tell you that the trailer did not disappoint! Within 5 minutes of firing up the actual flick, I knew this was the “Jane Austen for drooling idiots who hate Austen” retelling of her tale. Dakota Johnson plays a depressed yet still spunky heroine who fills her time talking directly to the camera about her lost love! The gorgeous houses around her might be from the 1810s, but this Anne Elliot is a GenZ CottageCore social media influencer with a drinking problem. Follow her for self-care tips, dating advice, feminist virtue-signaling, and totes cute snarking on her stuffy family! She even has bunnies! I fully expected a viral dance craze to show up half way through.

This flick feels so damn try-hard, just yearning to be relatable to the Kids These Days, that all of Austen’s prose is stripped away, leaving just the bare skeleton of the story. Why remake Jane Austen when there’s no Jane Austen there? If you’re going update it, go all the way like Clueless (1995) or Bride and Prejudice (2004). Adapting Austen in her own period without her own language — and with ridiculously 21st-century language — is just fucking weird and doesn’t work. Even Austenland (2013) took the idea of Jane Austen and put that in a modern setting in a way that worked delightfully.

The most un-Austen thing about this production is how every character says out-loud what they feel and mean, constantly. There is no subtlety and nothing left unsaid. Actual Jane Austen is incredibly artful at describing social niceties, class differences, and the complex relationships between family members, friends, and lovers, all without being blunt and obvious. This ain’t that. And just like there shouldn’t have been hand-jobs in Sanditon (2019-), there shouldn’t be octopus sex in Persuasion. SRSLY.

If it weren’t for all the fourth-wall-breaking, I might suggest watching this Persuasion with the sound off and just enjoy the pretty scenery and surprisingly decent costumes. I mean, they’re not great but the worst are because of Leading Character Syndrome, where the main character gets annoyingly modernized and/or sexed-up costumes, while the secondary characters look reasonable for the period. Because we called it accurately during Snark Week, and the most egregiously bad costumes are on Anne a la: 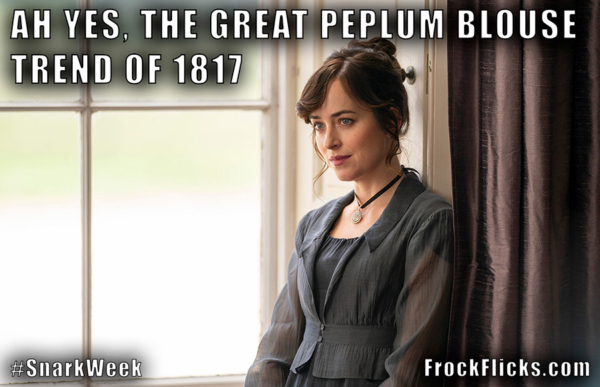 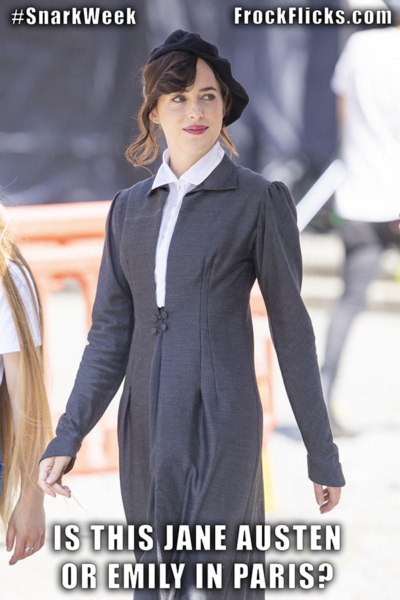 The little beret also hints at how pathetic the millinery effort is in this movie. Sure, I hate bonnets, but the 1810s are not especially known for berets and fascinators. For example Lady Russell (Nikki Amuka-Bird) is one of Austen’s great characters, and it’s a crime to give her this sorry excuse for a hat.

I guess this is all we get now? Feather ornaments ‘n shit? * sad trombone * 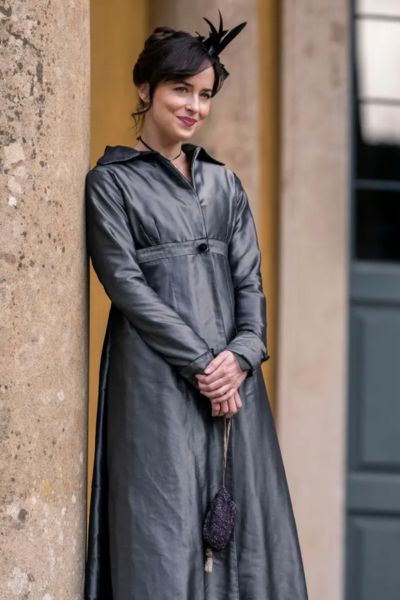 The costumes that I found better done are ones I also suspect are recycled from other productions. Lady Russell’s pink pelisse and another pink gown are both from Bright Star (2009), for example, and I wonder if the white embroidered gown Elizabeth Elliot (Yolanda Kettle) wears is from Emma (2020). I don’t see the exact one but it’s similar. 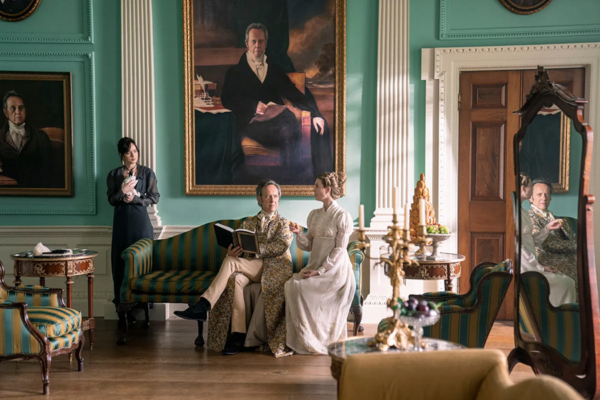 The extended Elliot family cleans up well, even if the conversation is appalling. 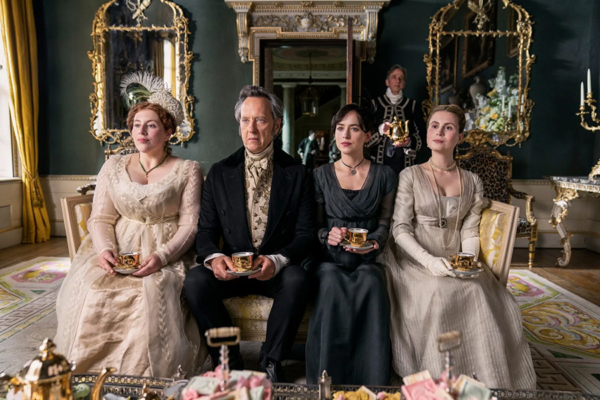 Costume designer Marianne Agertoft told Vogue that her mood board for this film was full of modern pop-culture references:

“With Dakota as Anne, her stompy boots have something of Debbie Harry in them, the shirting is quite Patti Smith and you see Audrey Hepburn in those jackets with the delicate shoulders. With the other characters, there were lots of paintings and references from the period on the mood board, but I also looked at Katharine Hepburn for Lady Russell, Vincent Cassel for Mr. Elliot, and Bruce Springsteen and Steve McQueen for Captain Wentworth.”

I don’t really see any of that, just more of the stripped-down “jeans and T-shirt” version of historical costume that’s so popular in frock flicks these days. Meaning, they’ll only use the basic historical silhouette, often in floppy, unstructured, “casual” materials, and with none of the details that made a period unique. Ho-hum. 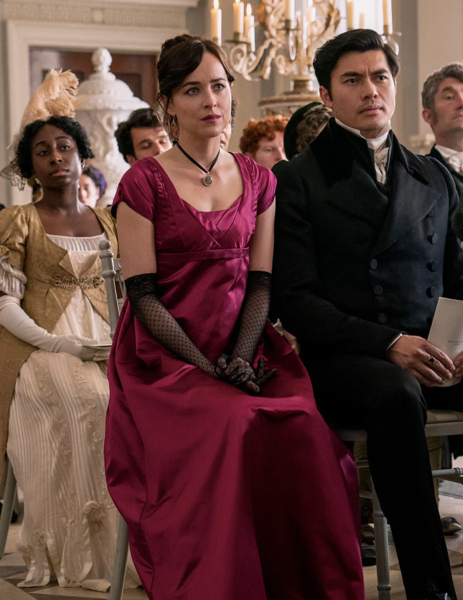 Is she going for goth Bridgerton? Because, honey, I’ve done it, & this is a sad-sack attempt. 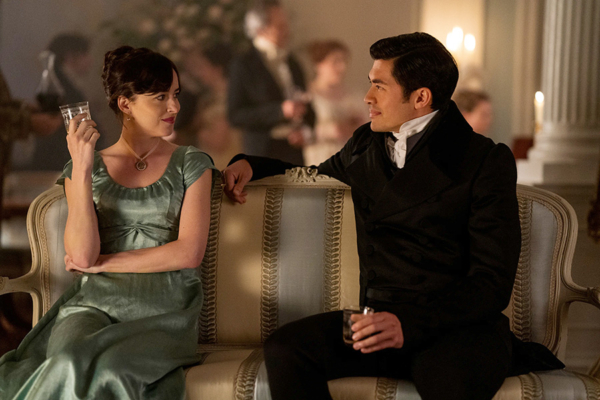 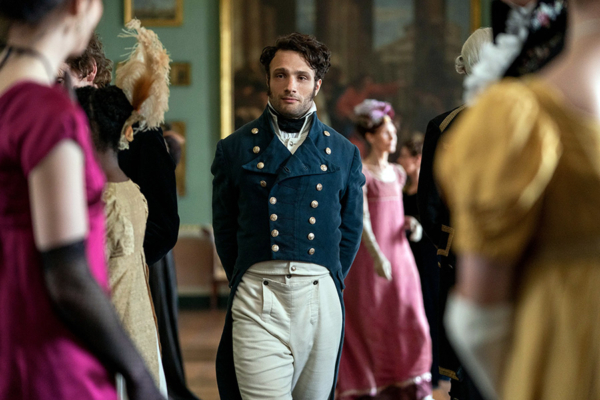 No idea why anyone would pine over Cosmo Jarvis’ Wentworth, esp. in this sorry excuse for a uniform.