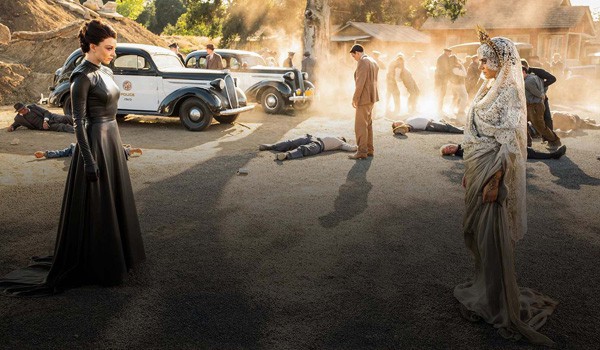 As Frock Flicks’ resident ElderGoth, I adored the original Penny Dreadful on Showtime. It was my gothic Victorian fantasy wet dream! I knew the not-at-all-sequel-just-a-thematic-second-edition Penny Dreadful: City of Angels (2020) would be spooky and dark with entirely different characters and a totally different setting. But I was NOT prepared for how fucking horrific it is in just the first episode! I don’t mean blood ‘n guts gruesome, but super nihilist with every possible bad thing happening and the world of the show going to hell all in 60 minutes.

So, um, I can’t say I recommend it because I didn’t make it to the second episode yet! As of this post, four episodes have aired, and they’re sitting on my DVR waiting until perhaps a few months after this pandemic is over and I’m not feeling quite so fragile. I’m not positive that I would have enjoyed the super-fucking-dark tone of this show in the the Before Times, but right now, whoa, it’s too much. 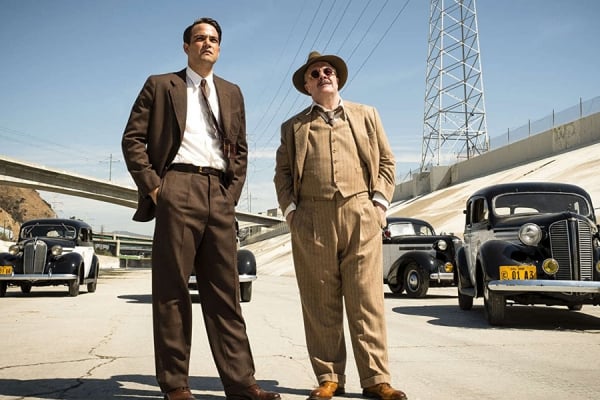 All that said, I can see what showrunner John Logan (who created the original Penny Dreadful) was going for. The storylines are a parable for our current times circa 2016-2019 in America, using historical facts of Los Angeles 1938 as a parallel, injected with a fat dose of supernatural evil. I get it, it’s pretty well done, I just don’t think I want it right now. The performances are solid, and the historical setting is beautifully created (especially the vignettes of a ’30s Chicano neighborhood), so I feel the show is worth mentioning. If you have the headspace for race war, Nazis, and demonic possession, rock on with City of Angels.

I’m just going to stick with an overview of the costumes, designed by Christie Wittenborn. She doesn’t have any historical work on her resume, but she’s done a little press for this series. One of the central characters is Natalie Dormer, who plays an evil shapeshifting demon, and she is literally playing four different people with four different looks and wardrobes! She’s barely recognizable in some of them, so props to everyone involved for the complete transformation.

There’s blond, blue-eyed, Elsa, a German immigrant with a young son. In a Saks lookbook, Wittenborn said, “I used pastels to highlight the innocence of this persona of Magda’s. There was a romanticism in her design with elements like butterfly sleeves and flutter skirts.” 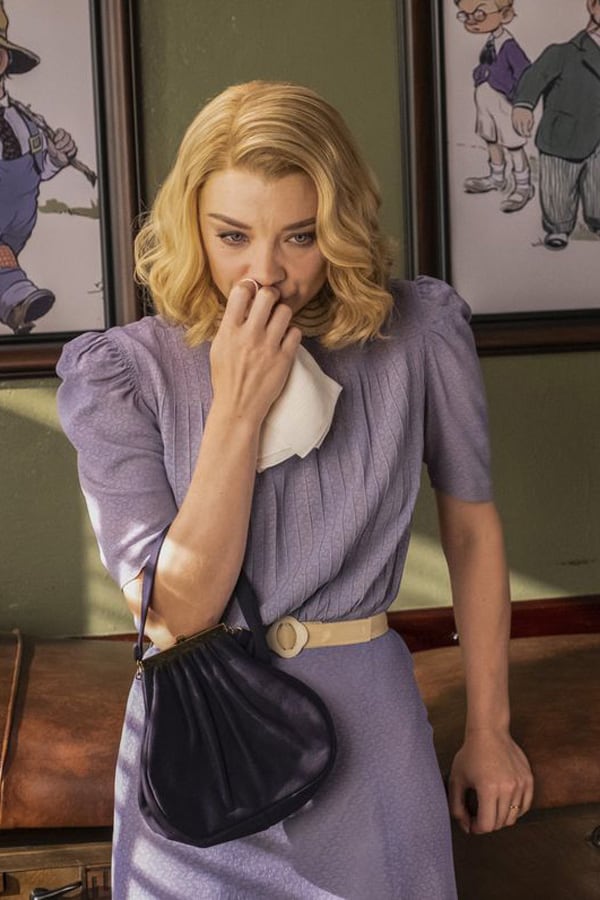 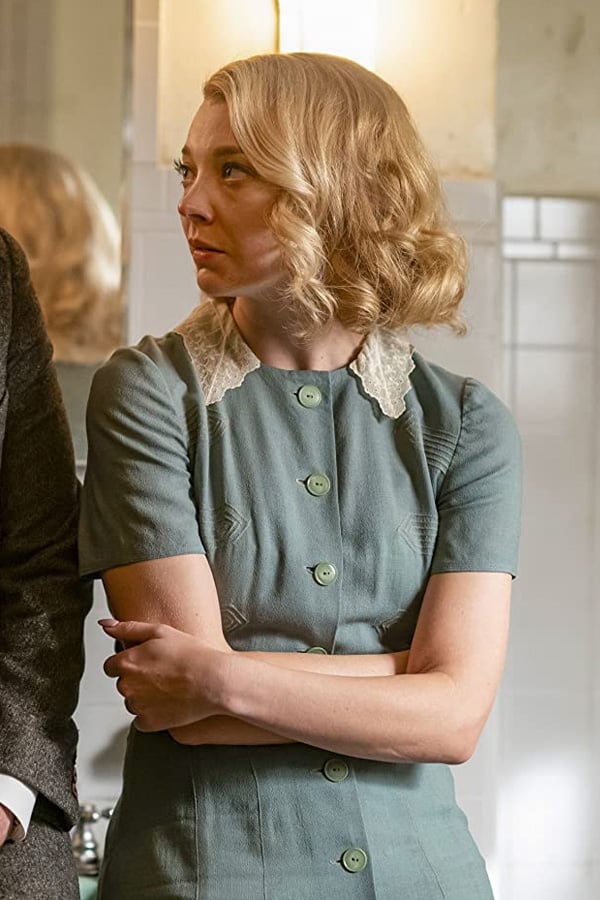 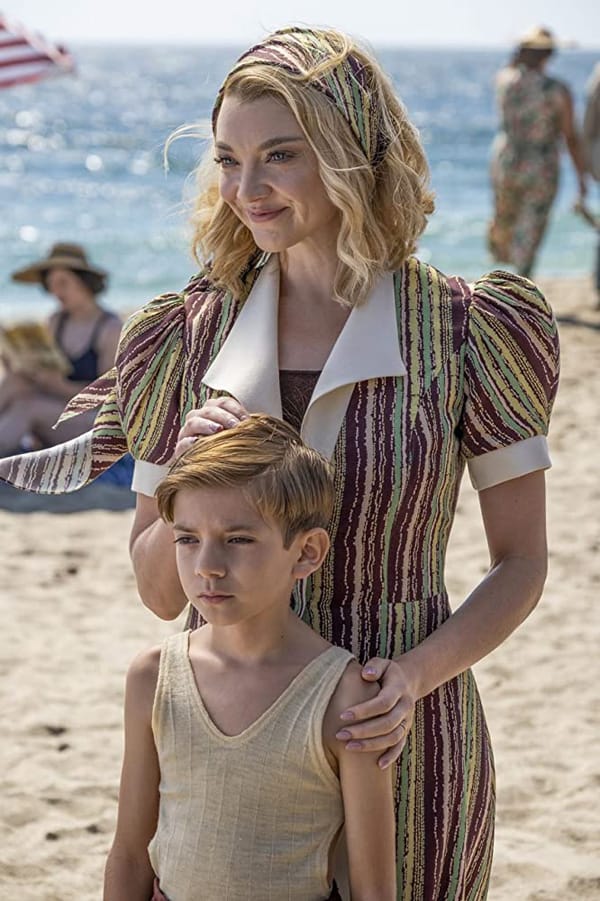 A little more color for the beach, but still very light, breezy, innocent.

There’s the conniving Alex, a political aide to an aggressive L.A. councilman. Natalie Dormer wore a mouthpiece for this character, and she insisted on being filmed from the worst angles, saying to Variety:

“A couple of the cast walked past me a few times before they realized it was me, when they hadn’t ‘met’ Alex yet. But as an actress, playing a character like that is so liberating because there’s absolutely no vanity attached. It’s like I would almost say to the camera operator, ‘What’s the worst angle? Put it in the worst, first.’” 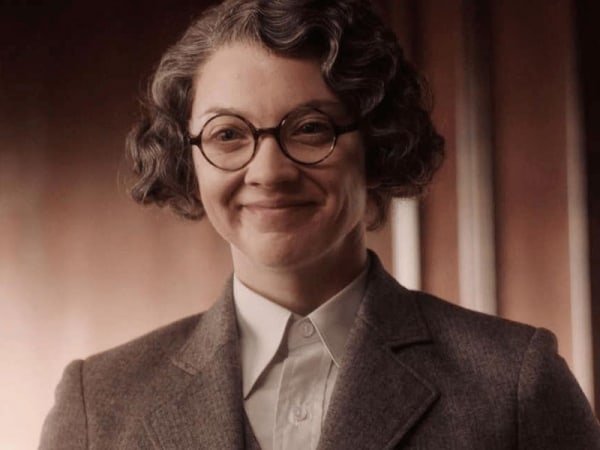 She looks so dorky in this incarnation! It’s hilarious & creepy because the character is a little shit. 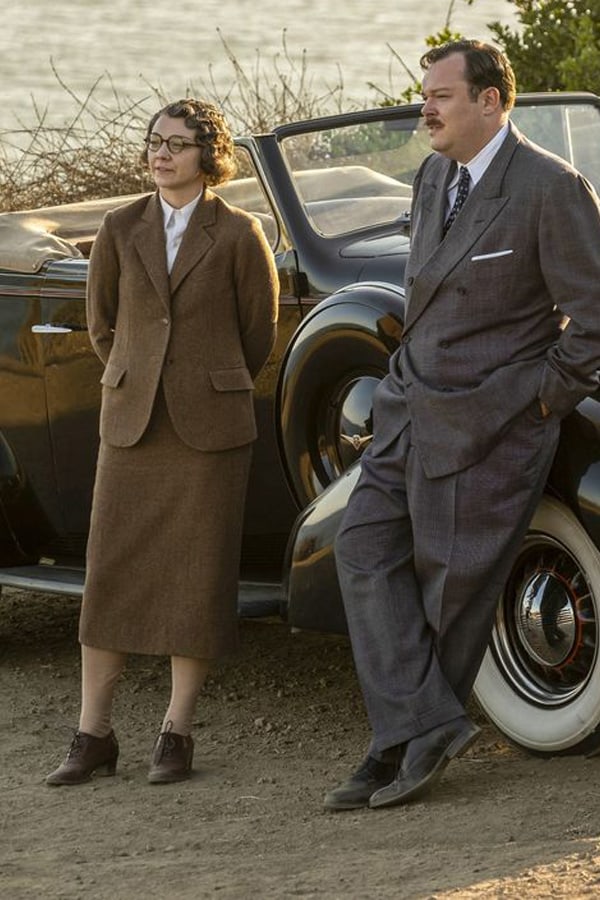 The costume is super bland, but the attention to detail is there — look at how the stockings are baggy around the ankles! That, combined with the longer skirt, makes her look dumpy.

At some point, the show introduces Rio, who’s involved in the Mexican-American Pachuco scene. 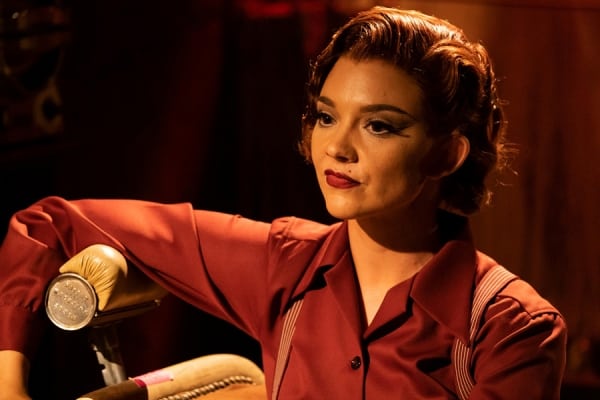 Only Magda, the actual demon, is not a historical character, although the strong shoulders of her black gown have a subtle 1940s flair. Costume designer reserved the color black for Magda’s demonic wardrobe, and she said of this dress in Variety: “I wanted her long black dress to have a liquefied, transformative feeling as she glides in and out of each character.” 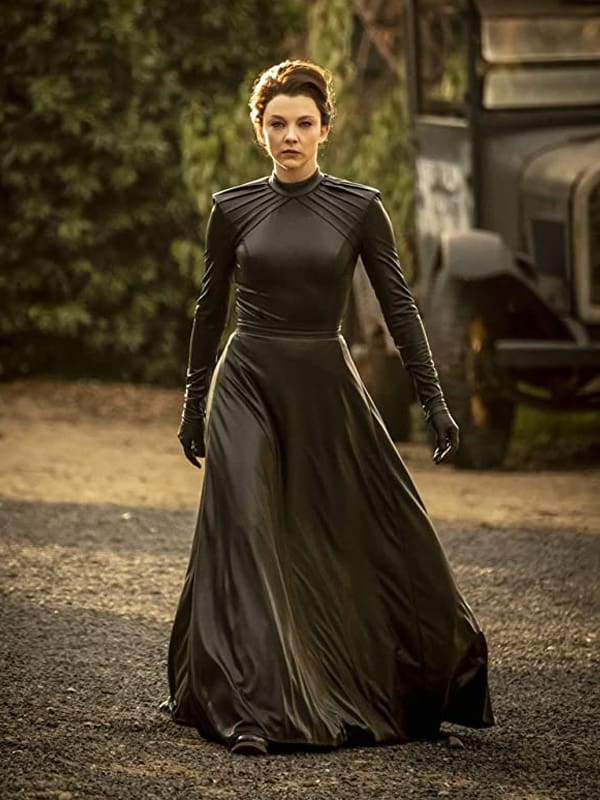 The striking black suit she wears also has somewhat ’40s lines, emphasizing her otherworldliness by being a touch ahead of contemporary fashion. 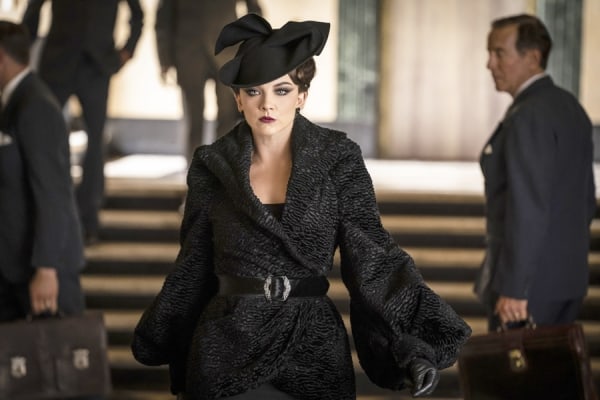 This hat was made by Western Costume Co.

Natalie Dormer was very appreciative of the costumer’s work on these very different wardrobes. She told EW:

“Costumes help because the way they all move. If you’re standing in a gorgeous Zoot suit, like Rio, you stand in a very particular way in contrast to Alex, who’s standing in an awful tweed, masculine, uncomfortable piece. Your physicality changes immediately, and [the characters] all move differently. You find a voice and a different placement in your mouth, whether it’s an accent or tone. Alex talks down here in her throat and [is] guttural. Rio is in her chest, and Elsa is up here in her nose. There is a process that happens in that hour-and-a-half, two hours when you’re sitting in the hair-and-makeup chair than is just about what is physically being done to you; you’re getting your brain into it, as well. The crew was extremely supportive in those transitions [from character to character] when I had to do them, when I did have to play two characters in one day and sit in the hair-and-makeup chair for three hours in between the process. It’s acting in its grassroots. I remember it said in [the script for] John’s pilot episode, “We meet Alex and we meet Elsa. This is not prosthetics. This is not trickery. This is acting,” with capital letters and underlined. When an actor reads that, that’s a dream to see that written down.”

Are you up for Penny Dreadful: City of Angels? If so, report back to us!