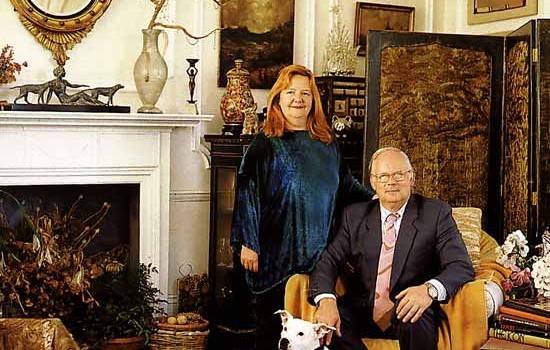 I first came across Patricia and Charles Lester, a Welsh husband-and-wife team of clothing designers, while doing research on the Fortuny-style gowns in Wings of the Dove (1997). Since then, I’ve noticed their designs (and what I think are their designs) showing up in other films.

Before we go any further, first thing’s first — I should explain who Fortuny was and why his gowns are such a big deal:

Mariano Fortuny was a turn-of-the-20th-century Spanish-Italian artist who is still admired today for his gorgeous art nouveau textiles. He’s best known, however, for his “Delphos” gowns, which were unlike anything the fashion world had ever seen at the time that they were debuted in 1907. Delphos gowns (also known simply as “Fortuny gowns”) are finely pleated, columnar dresses that echo Ancient Greek peploi and chitons. They came in a range of styles with varying necklines; long and short sleeved; sleeveless; in a variety of lengths; and with optional matching over-tunics, and were embellished with Murano glass beads and stamped silk velvet caftans. Detail of the tiny pleats and the glass bead “weights”.

The endurance of the Fortuny gown’s popularity isn’t so much that they were beautiful to look at, fun to wear, or preferred by some of the most fashionable women of the first quarter of the 20th century. It’s mainly because no-one alive today, aside from possibly Fortuny’s heirs, actually knows how the dresses were pleated. There are plenty of theories, and even the occasional patent that gives the barest hint as to how Fortuny’s pleating machine worked, but at the end of the day, how Mariano Fortuny achieved the tiny Delphos pleats in his dresses is still a complete mystery.

How the Lesters factor in:

At some point in the 1960s, Patricia and Charles Lester were experimenting with various tie-dyeing techniques and hit upon a method where the fabric was finely pleated, then dyed. Playing around with it, they discovered that if they left the pleats in place after dyeing the silk, it gave the fabric a beautiful textural quality. So, they kept experimenting with the technique and eventually began producing garments that looked suspiciously like the Fortuny Delphos gowns. According to the Lesters, they had no idea what a Delphos gown was at the time; they were simply intuiting the process of making a garment from finely pleated silk fabric.

They had not heard of the artist Fortuny whose pleated work has been compared to theirs — so to them this technique was original and indeed it is nothing like Fortuny’s work having a fluidity that is uncharacteristic of the straighter more rigid Fortuny pleating. — Patricia Lester’s website It is true that the Lesters’ couture gowns are much more fluid and use a lot of stitching to manipulate the pleats in really gorgeous ways, but their simple pleated dresses are so evocative of Fortuny’s Delphos gowns that there’s really no sense in arguing that they weren’t the inspiration. And the fact that they are used so frequently in films to stand in for an authentic Fortuny gowns just makes it harder to deny that these dresses aren’t intentionally reproducing Fortuny’s designs. I do want to reiterate that the method the Lesters use to pleat their gowns is, as far as anyone knows, not the same method that Fortuny invented. However, like Fortuny, the Lesters are pretty coy about what technique they use to pleat the fabric. I’ve heard people speculate that it’s likely something like arashi or shibori, but there’s nothing out there to confirm that suspicion. Regardless, the Lesters certainly seem to have embraced their status as the go-to for Fortuny-style gowns on film.

NOTE: The Delphos gowns featured in the final season of Downton Abbey are actually original Fortuny gowns, and not repros. Downton was known for using original garments where it could, and with a huge costume budget, it’s not surprising they featured real Fortunys. Michelle Dockery in an original Fortuny “Peplos” gown. The Peplos was a two-piece affair, whilst the Delphos gown was one piece.

But back to the Lesters. They don’t get their names in the credits for their designs, so most of the films featuring their work are verified only by a brief list on their website. However, even their website makes it sound as if there are other Lester gowns floating around film and television that aren’t listed. I’ve come across a couple that I’ve included below the list of “official” Lester gowns, but there isn’t any documentation to support my assumptions other than me thinking, “Hey, that really looks like a Lester ‘Fortuny’ gown!”

Costumes designed by Sandy Powell. She appears to the first big budget movie costumer to use the Lester’s dresses, and she will use them again in Wings of the Dove several years later. Gertrude (Julie Christie) wears a gold Lester dressing gown when Hamlet (Kenneth Branagh) confronts her in her bedroom. The film is set in the 1890s, so it’s a tad early for the Delphos gown, but I don’t think they were going strictly for historical accuracy with this scene. There are a number of Lester gowns in this film, but the most familiar to everyone are probably the two that were featured on the movie posters and video/DVD covers. This one isn’t a pleated dress, but it is another variation on a Fortuny-style, the block printed velvet kimono coat. Worn by Anne Bancroft. I have a vague recollection of watching this. At any rate, Daryl Hanna wears a Delphos-style gown by the Lesters. This is one of those films where I look at the photos and think “That’s supposed to be period?” It takes place in the late-1930s, allegedly, but you could have fooled me. This film should also get special mention for the first Jonathan Rhys Meyers film where he doesn’t make my skin try to crawl off my skeleton and hide in a bleach bath.

This one is the one I’m least sure of, but the chemise worn by Asia Argento as Charlotte Sauve when she is sent to sleep with/assassinate Henri sure looks like it could be a Lester design.

I feel reasonably comfortable that this dress (also worn by Asia Argento, coincidentally) is probably a Lester gown. Could this be the earliest Lester gown to appear on film?

Are you a fan of Patricia and Charles Lester? Have you spotted their work in other films? Share it with us in the comments!