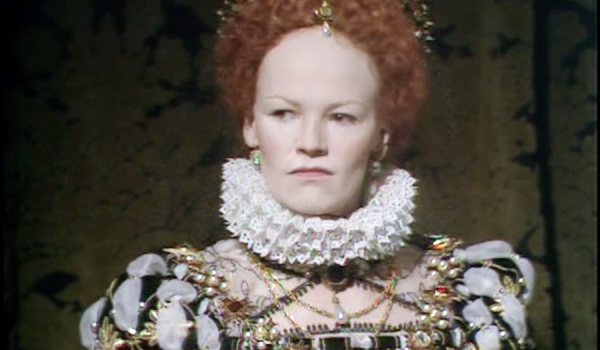 We’ve talked about this series before. We’ve praised Glenda Jackson for her portrayal of Queen Elizabeth I. But we have yet to do a proper deep-dive into Elizabeth R (1971) — the BBC miniseries that aired on PBS Masterpiece Theatre and was the gateway drug for me and countless other fans of 16th-century costume and history.

What is so great about this old series? Let me sum up: Six well-written, well-acted episodes that tell the story of Elizabeth’s ascension and reign in a factual and dramatic fashion, plus hundreds of costumes that meticulously recreate portraits of Queen Elizabeth. If there’s anything wrong with it, well, I guess you could complain that it’s on video not film, most of it is shot with tight interiors, and a total 510 minutes is a little short for over 50 years of history, plus one woman, even the great Glenda, kind of stretches credulity at looking both 16 and 70 (she was in her 30s at the time). But that’s all you can nitpick, fuckers! Otherwise, this miniseries is the gold standard against which all historical TV and most historical movies should be judged. Here’s why…