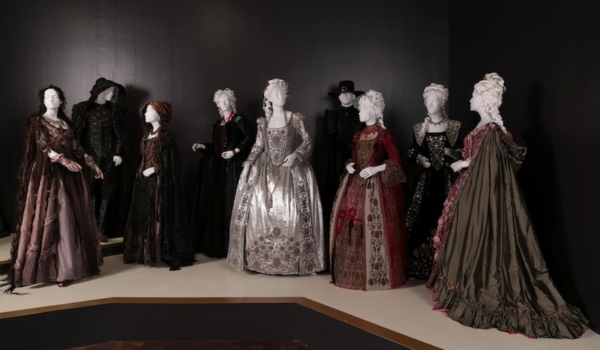 Recently, I got a chance to visit the Fashion Institute of Design and Merchandising exhibit, “The Outstanding Art of Television Costume Design,” in Los Angeles, California. Here’s my review, plus a lot of photos, of the TV costumes that were on exhibit!

But first, I’d like to take a rare moment to plug a truly worthwhile fundraising campaign. The FIDM museum in Los Angeles is fundraising to purchase the Helen Larson Historic Fashion Collection, a HUGE collection (over 1,400 pieces) of real historical costumes dating from the 17th to the 20th centuries. These are not film/TV/theater costumes, these are the real deal … and there are a couple of different reasons why I am plugging this: 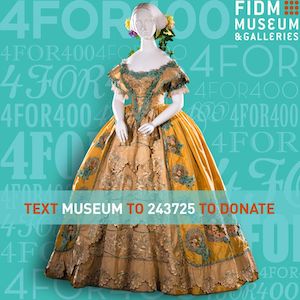 Click here to read more about the Helen Larson Historic Fashion Collection, and to donate to FIDM’s fund to purchase it.

We’re all here because we love historical costume. Let’s all help the FIDM Museum buy this amazing collection.

Now back to your regularly scheduled programming … the TV costume exhibit! The FIDM Museum does two exhibits every year, one featuring costumes from numerous movie productions and another featuring TV costumes. This year there were 24 different shows represented, including most (if not all) of the Emmy nominees. Everything from historical shows to fantasy, sci-fi, and contemporary was there (I, of course, focused on the historical and fantasy productions).

Working alphabetically, here’s what I saw and what I thought!

Agent Carter is too superhero-y for me to watch, but I liked the costumes in person! The burgundy day dress, the blue suit, and the black evening dress with rhinestones were all lovely examples of 1940s costume. I’m not, however, positive what’s up with the woman’s black and white striped suit, which reads flight attendant to me. 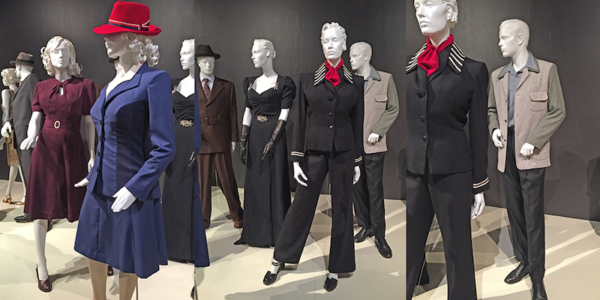 Trystan complimented the fit and styling of Bessie‘s costumes in her review, but in person, I thought they seem like purchased, faux-1920s stuff. The bandeau on Ma Rainey’s outfit (right) was pretty. 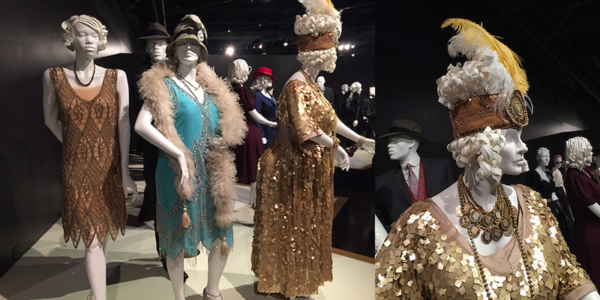 I reviewed The Book of Negroes, and it was nice to see the costumes here. Although I had some of the same thoughts as I did when watching the show on TV, the distressing on the men’s garments, plus little details on the hanging pocket on the orange and red outfit, were nice touches. 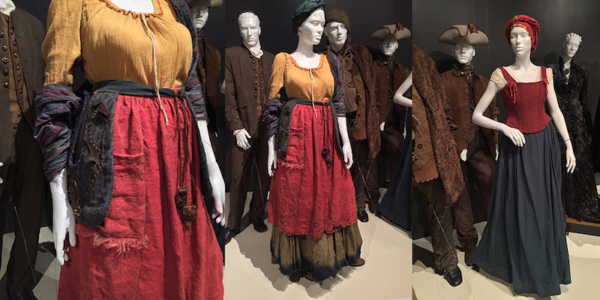 The Book of Negroes.

Trystan ran down The Lizzie Borden Chronicles for us, but I’ll admit to not having watched the show. In general, these were a mixed bag for me — I thought the shapes were nice, with the 1890s leg-of-mutton sleeves, and I liked how detailed the costumes were. I’m not really sold on the red embroidered outfit (unless it’s for a masquerade party?), but the black ensemble with the swallows was GORGEOUS. 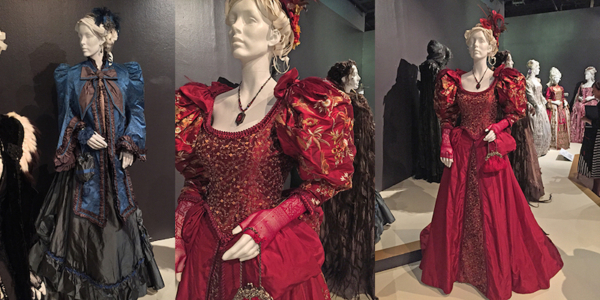 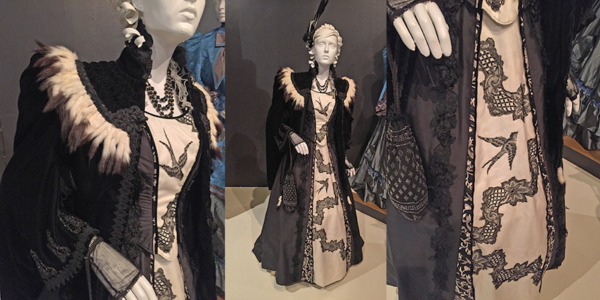 The Lizzie Borden Chronicles. I lightened the shadows so you could see more detail — in reality, the black dress is the same black as the coat. Stunning use of appliques.

I’ve tried (and failed) to get into Once Upon a Time, but the costumes were very well done in person — lots of smaller details that would look great in close-up on screen. Of course, it’s fantasy, so they can do whatever they want, design-wise! 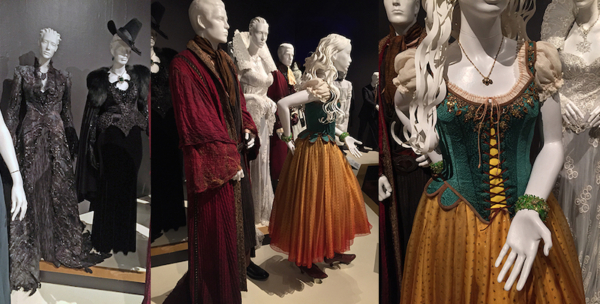 Once Upon a Time. The black outfits on the left are lightened. I loved the details on the green corset bodice. 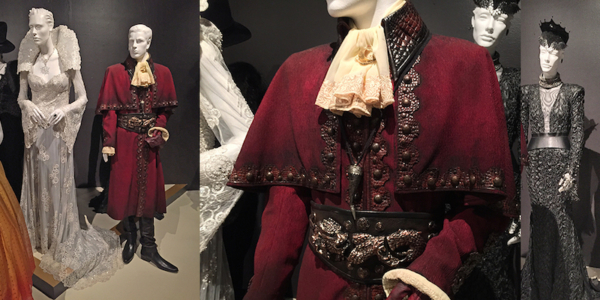 Once Upon a Time. I love the standing ruff on the white outfit, and the distressing on the red ensemble (and that trim!) are great.

No-one will be surprised that I scoffed when I saw these costumes from Reign. Okay, okay, the costumes for Catherine de Medici and “Prince Francis” (first set of pictures) were well-designed and executed. But Queen Mary’s dress (second set) was just a clunky piece of crap. Who puts a round waistline (when it’s not even required by the period) on a super-thick bodice??!! 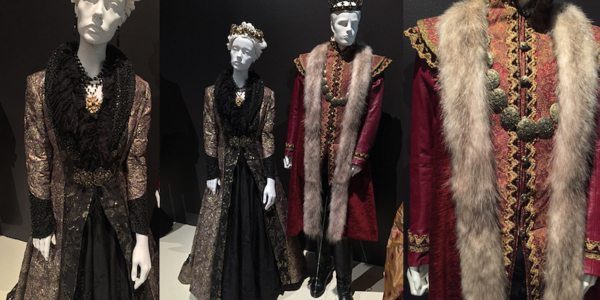 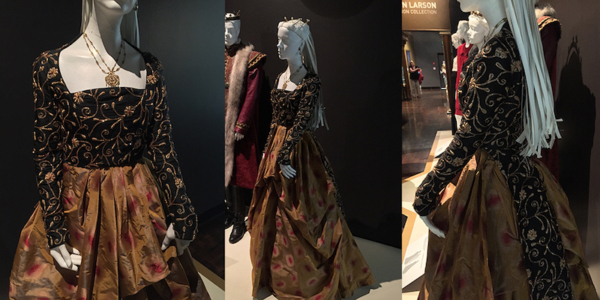 Reign. Reminds me of the good old days of Regretsy. “Hey, guys, let’s hot glue some wrinkly fabric to this high-school-theater costume bodice I’ve got!”

I have been avoiding Salem because the few photos I’ve seen looking nothing like 17th-century Massachusetts. However, I’ve now revised my stance, as — while completely historically inaccurate — these costumes were the highlight of the exhibit for me. I mean, if you’re going to go inaccurate, you may as well GO FOR IT. The costumes were a blingy mash-up of 18th century meets haute couture meets horror. Nearly every one had me double-taking as I spotted new details and elements — and from afar, it was one giant, glinty, sparkly mass of fabulous. I mean, go big or go home, right? 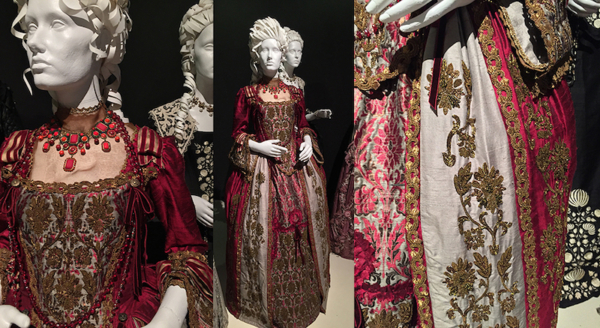 Salem. Wait, I think I see a few inches of un-blinged fabric here! 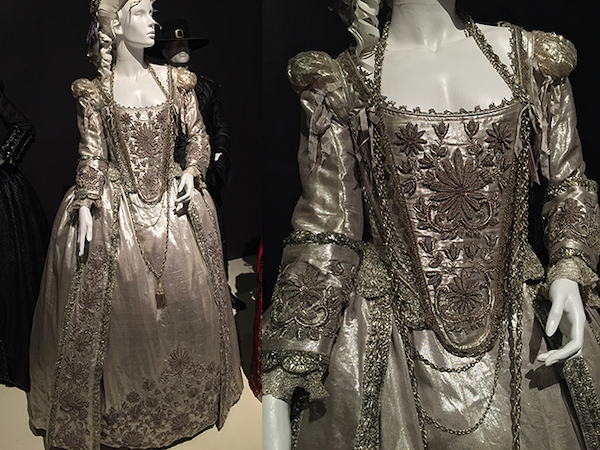 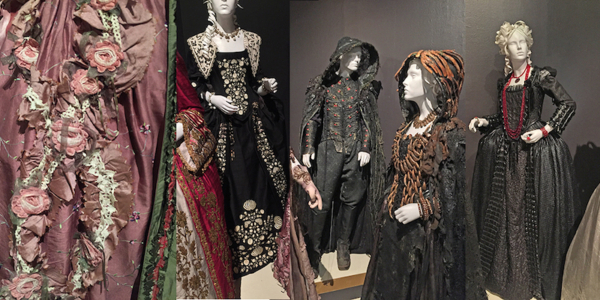 Salem. Sadly my full-length shots of the lavender gown (left) didn’t turn out, but the highlight was the layered trim. That black and white ensemble (middle) was GORGEOUS. And that’s a lot of gothy horror amazingness (second from the right) — check out the CREEPY EYES and the tusks! 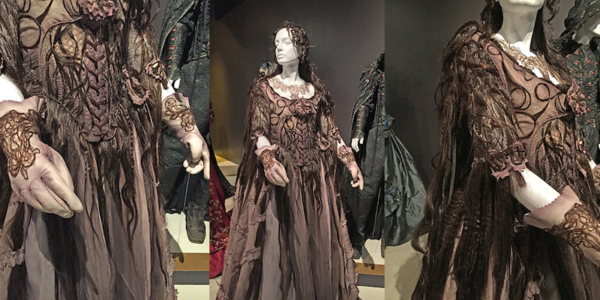 Salem. THIS WAS AMAZING. There is (granted, faux) HUMAN HAIR woven throughout the ensemble. The fabric was also treated to look like leather. AH-MAZE-BALLS.

The Knick won (to me) for highest quality — these were impeccably-made costumes that were so spot-on for the era. It was kind of the anti-Salem, but I very much applaud their choice of subtlety. (And enough people have said I should keep watching, despite the gore, that I’m going to give it another whirl). 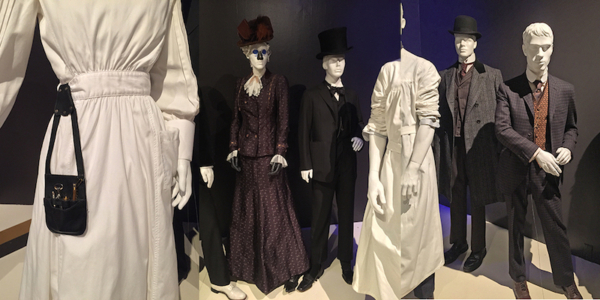 The Knick. Love all the instrument’s in the nurse’s (left) bag. 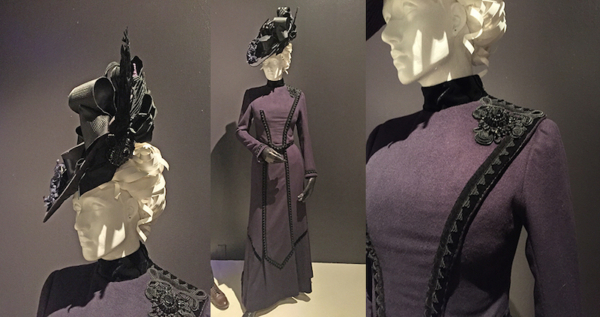 The Knick. THAT HAT.

I would like to know why TURN: Washington’s Spies feels they need the ALL-CAPS. Are they worried they’ll get overlooked? Yeah, I can see it — I’ve been putting off watching it, despite the 18th century being my era. Sadly, my men’s costume photos didn’t turn out, but the silver dress on the left was the real standout. I liked that there was actual hand-stitching showing on the center fronts of the bodice, and neither of these ensembles offended me (although why is everything silver?), so, yeah.

And now, the let down: Wolf Hall. I loved it on screen, but in person, one out of three costumes was super meh (the red one in the second set of pictures). I did overhear another attendee saying she had helped to dress the mannequins, and that the red costume specifically had been used in another production (which had overlaid the orange sleeve turnbacks in black velvet, that the dresser had then removed), so my big complaints may have come from another production: the overskirt needed some serious lining, I question the trim along the skirt fronts, and the undersleeve and forepart fabric looks SUPER Victorian to me (hello, paisleys!). 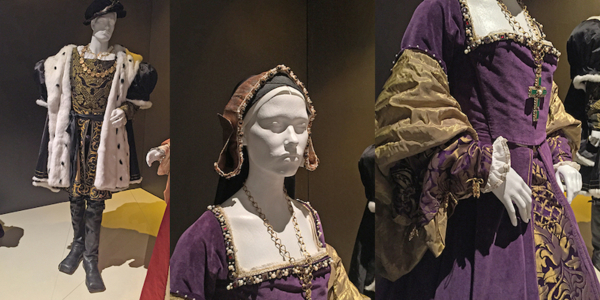 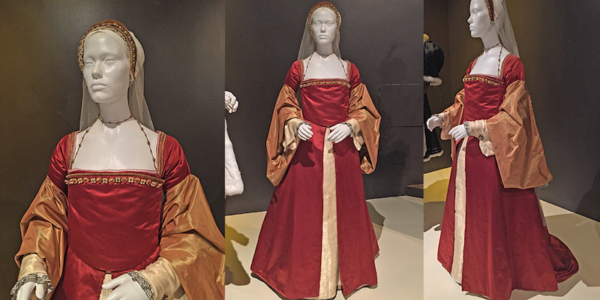