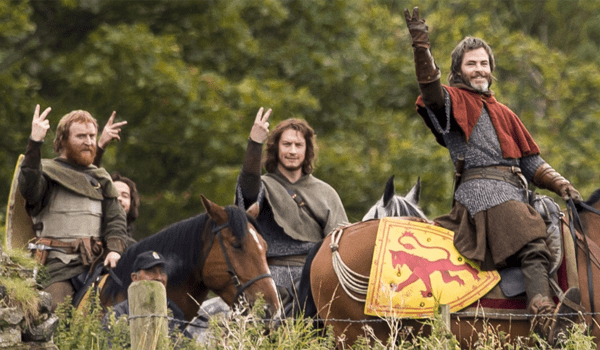 Netflix is gearing up to release Outlaw King (2018) in late-fall of this year, and so I am taking the time right now to mentally prepare myself for the momentous occasion that notably not-Scottish actor Chris Pine attempts a Scottish accent. Right away, it’s hard not to draw some parallels to Braveheart, despite the fact that I’m sure the last thing anyone associated with this film wants is to be compared to its ambiguously historically accurate Mel Gibson vanity project predecessor.

The first comparison that is unavoidable is that both films put Americans (or in Gibson’s case, Australian-American) in the starring role of a Scottish national hero. Pine is cast as Robert the Bruce in Outlaw King, which makes me kind of squinty, because hasn’t Outlander taught us that there’s actually a crapton of handsome Scottish actors out there? I’m just asking. Because it seems like there’s a lot of them to chose from. Who knows, maybe Outlander absconded with all the viable Scottish actors, and Netflix was forced to cast the main character with an American. It could also have something to do with producer/writer David Mackenzie being pals with Pine. At any rate, I raise my eyebrow at the casting choice here, because while I enjoy Chris Pine, I’m skeptical about casting him as Robert the Bruce. Not as skeptical about him as I was about Mel Gibson as William Wallace, so there is that.

“Please don’t fuck me up this time, guys.” — Robert the Bruce, probably.

The second unavoidable comparison with Braveheart, is that Outlaw King deals with the part of Scottish history that is, admittedly, only hinted at in Braveheart — namely the actual situation that lead William Wallace to fight for Scottish independence (you may be shocked to learn it wasn’t just because some English baddy murdered his wife). However, this time it’s told through the eyes of Robert the Bruce. If your only knowledge of Robert the Bruce comes from Braveheart, you probably only know him as the guy covered in furs that occasionally shows up to suck up to Wallace and/or the English depending on the situation. You would be surprised to learn that he’s actually the King of Scots, and something of a badass himself. But not so as far as Braveheart is concerned. He’s the morally ambiguous foil to William Wallace’s psychotically nationalistic woad-painted one-man murder machine. It doesn’t appear that Outlaw King is taking that approach to Robert the Bruce, since the film ostensibly casts him as the hero, and therefore we should expect a far more valorized depiction of The Bruce.

And that’s as far as I can take it without having seen even so much as a trailer of the film, at least as far as commenting on the casting and plot goes. So, let’s look at some of the shots of the actors doing their thing, and see how the costumes hold up. Right away, I’m getting the feeling that this is not going to be a pretty costume flick. It’s probably going to be more of the gritty-covered-in-dirt costume flick, which means there’s nothing to distract me from the historical accuracy of the plot (you are all forewarned). That said, I’m cautiously optimistic about the approach the costume team is taking (seriously, IMDB names at least two-dozen people associated with the costumes in this flick).

The wool tunic and hood are great. The leather strapping on the gloves strikes me as a Hollywoodized conceit, but at least he’s not covered head-to-toe in it. Maille is definitely appropriate for this era, particularly on campaign or when you’re an outlaw king trying to avoid being killed by English Baddies. That hairstyle is verging dangerously close to a historical mullet, though.

Overall, I give major props to the costume designer/director team for not sticking the Scots in kilts. Repeat after me, kilts are not historically accurate for 14th-century Scotland. You may feel free to quibble with me as to whether or not they were accurate for 14th-century Scottish highlanders in the comments, but as The Bruce was a lowlander noble, his clothing would have been very much in keeping with the rest of Western European fashion of the time. And I see that that’s the stance that the film is apparently taking here, which bolsters my hopes that we will get to see a better representation of what early-14th-century Scots wore.

Not a kilt in sight! And everyone appears to be in wool trews. So far so good … But the real proof is in whether or not our hero, played by Chris Pine, is wearing Contractually Obligated Leather Pants. His trews could be wool or suede, hard to say from this shot, but I’m leaning towards wool. And his boots even look plausibly late-13th/early-14th-century!

YAS. I love a long length cote on a man. Excellent color, too.

As for the female costumes, who the hell knows? So far, there have been very few shots of the women in the cast, which is not exactly surprising since I have the distinct feeling they’re basically window dressing to the main story, which is ALL ABOUT THE MENZ. Seriously, this is the only shot I’ve been able to find of an actress in costume, associated with this film.

An extra in her natural habitat. Notice the mobile device in her right hand and the paper coffee cup on the ground beside her. Also note the potted plant.

I’ll be back with more as soon as Netflix releases a trailer or more photos of the actors surface! Until then, cross your fingers that this will end up paying better lip service to Scottish history than its Mel Gibson-y predecessor.

Will you be watching Outlaw King?