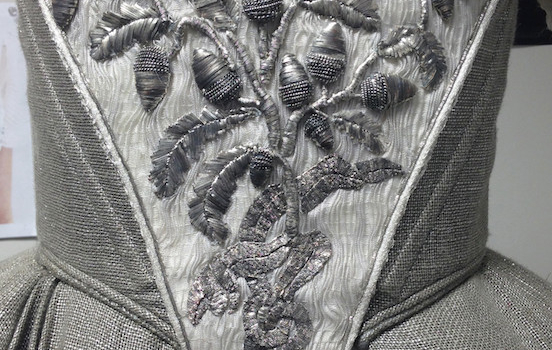 I don’t know if I have anything to add to the discussion of Outlander! The Wedding! The Dress! that we haven’t already said, but seeing as I started talking about this show, I’m going to keep going! 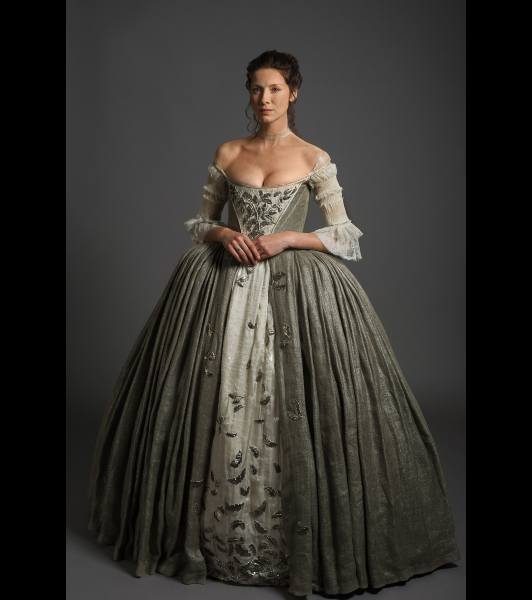 American Duchess has done a post talking about the dress from a historical accuracy point of view, and I think she’s spot on in what she identifies as being “accurate” and “inaccurate.” There’s an interesting conversation that happened in the comments with the show’s costume designer, Terry Dresbach, about authenticity and the expectations of fans. Commentor Rowena says,

“I think much of this breaks down over the definition of “as authentic as possible.” Your “as possible” is likely very different from those nitpicking your choices. I understand that your producers and the constraints of film limit possibility in that regard–it only takes glancing back over a century of film to notice that “historical” costume comments more on contemporary aesthetics than historical accuracy. Your “as authentic as possible” takes into consideration constraints that, say, a living history costumer does not have to consider. However, “as possible” to a reenactor, costume historian, or giant nerd like me would mean choosing only the documentable — not the potentially plausible. No robes de cour in Scotland that you can document? Then using one would be “against the rules” of authenticity. So would other artistic choices you made. So when people criticize the “authenticity” of the piece, they’re doing so from their own definition of authenticity — the documentable only. Reproduction of documentable stylistic and construction choices only. No fun, ever (kidding … mostly).“

And I think she makes a really good point. Many of us online costume people are in some way connected with reenactment or the perspective of historical recreation. So even if a costume is 99.9% “historically accurate,” we’ll notice and comment on that .01% that’s “wrong.” But costume design for television, movies, and theater is a different animal. There, you’re not just trying to simply recreate a specific or representative ensemble that is trying to be as much out of the past as possible. You’re balancing history, budget, audience expectations, and storytelling. Terry writes (again, in the comments),

“You serve a lot of masters. Historical accuracy, which contrary to what some think, I am very committed to, studios and networks commercial interests, a general audience who knows nothing about the 18th century, time and shooting constraints, available materials and their cost. We do not have unlimited time, money or resources.”

So yeah. Academics would look at this dress and say, “Pfff, a French court style worn in the Scottish highlands? With modern-layout silver leaves floating on it? There’s no sources for that!” Whereas a film/tv/theater costume designer might say, “Yes, but it COULD be possible, and besides it’s pretty, and it needs to look good in candlelight, and it needs to evoke a particular emotion, and modern audiences need to think it’s pretty, and…”

Also, side note that “French” court styles were worn in England (don’t know about Scotland) for the most formal occasions (like coronations) by members of the royal family and super high ranking nobles. See, for example, this “French” style court bodice worn at the coronation of George III.

So if this dress were being made for a museum, or a historical reenactment, or something else academic, yes, I’d want to tweak it. For a TV series, I’m really quite happy with it! It’s pretty, it’s impressive, the embroidery is stunning no matter how you look at it, and I’ll keep saying the same thing: I am just so thrilled that they are trying to keep this show “historical” rather than going the Reign/Tudors/throw-everything-out-the-window-and-put-them-in-prom-dresses route. 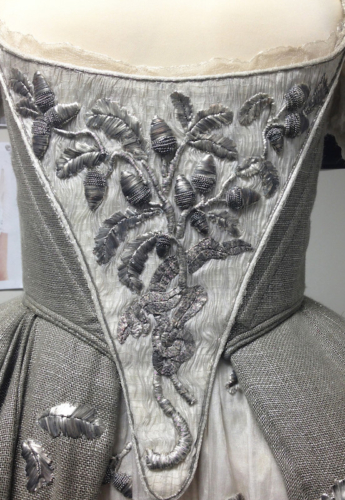 It’s also worth noting, for those of us who thought the neckline was too low (including myself!), that there was originally a bit of sheer fabric that covered Claire a bit more, but it didn’t survive filming. Terry says,

“You can also see what happened to the top of our bodice. there was another piece to the dress, a band of very translucent silver fabric, that bordered the top of the gown, bringing the neckline up a few inches and leaving her less bare. But when we were shooting, the taking off and on of the cloak, totally destroyed it. it was just too delicate to withstand the dragging of that heavy wool off and on. We stood on the side of the set dying a little, every time it went off and on, but they are never going to stop shooting so you can repair something like that. too time consuming.”

There’s LOTS more interesting information about the dress available at Terry’s blog, this Glamour video, and these articles at Yahoo! TV and Variety.

I also thought that Claire’s stays were very pretty, appropriately since she spent so much time in them on the wedding night! I liked the lacing rings used to close the stays in front, and the embroidered fabric is gorgeous. I was also interested in the petticoat, which was quilted around the hem. It looks to me like something else was worn (a larger hoop?) to support the wedding dress skirt, but we didn’t see it uncovered. I haven’t seen only-quilted-at-the-hem in the period, but it would be a great way to support a big skirt. 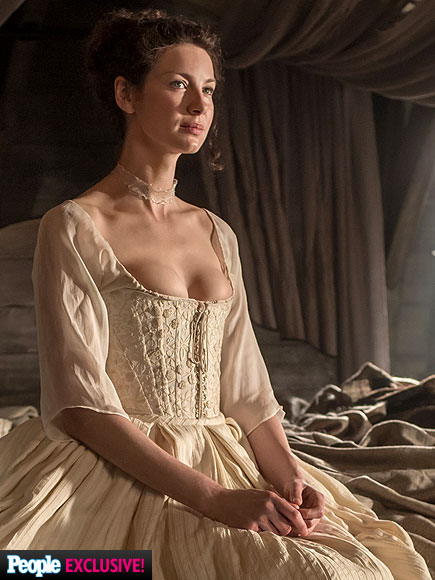 And the episode itself? I have only watched it twice (don’t worry, there will be many more viewings). On the first run-through, I was annoyed at the flashbacks used to tell the story… because the high point for me wasn’t going to be The Ceremony, it was going to be The Shagging … except then the costumer in me kept thinking, “Well, are we going to get a wedding dress? Or are they just skipping that, since it’s the wedding night that’s more interesting the book?” Needless to say, we got a dress … and we got shagging. As Jezebel pointed out, THAT is how you do female gaze. Take note, Hollywood. On my second viewing, I was really really happy with it. Mostly because, shagging. But also, they captured Claire’s inner turmoil, Jamie’s naivete and hunkiness, and the growing intimacy between the two.

A further thought: in the next episode, apparently, we’re going to catch up with Frank and see how he’s handling Claire’s disappearance. That’s one thing that’s different from the book: they really spent time establishing a strong relationship with Frank, and are more invested in keeping him a viable option. And it’s interesting to the adult in me, because it’s allowing a slightly different take on things. But the 5-year-old in me who is Team Jamie just keeps wanting to say, “Frank? Who is this Frank of which you speak!”

(Oh, and confession time: I broke down and am rereading the books, starting with book 1, obviously. It’s been a number of years since I’ve read the first few. Right now, we’ve just time traveled and met Jamie and company. It’ll be interesting to refresh myself on the details. Already, I am remembering how enjoyable Claire’s wit and sarcasm are, which doesn’t come through as well in the TV series — I hope they can emphasize that more in coming episodes!)