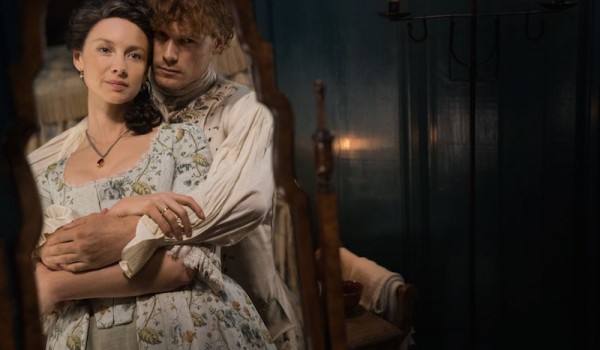 Outlander season 4 (2018) is upon us, and I’m doing everyone a solid by watching/covering it for Frock Flicks. We’re back with 1940s-60s Claire, who has time traveled to 1740s-60s Scotland, and, now, the American colonies. At the end of season 3, she and her Scottish husband/hunk Jamie were shipwrecked in Georgia. Season 4 starts with them in North Carolina, starting a new life.

I’m not really in the mood right now to watch a perfect couple be perfectly in love, but luckily things aren’t going perfectly smoothly for Jamie and Claire, so thanks for that, Diana Gabaldon!

The costumes are very much in line with what we’ve seen in previous seasons — no major deviations. This is the last season to be designed by Terry Dresbach; I did notice another costume designer mentioned (along with Terry) in the credits, but didn’t catch the name. I wonder if that will be season 5’s main designer? As far as I know, the season 5 designer hasn’t been announced yet.

(Note: We also have daughter Brianna and potential boyfriend Roger stressing about Life in the late 1960s/early 1970s, but I’m not going to talk about those costumes, because while they’re cute, they’re not that exciting).

Here’s my thoughts on specific costumes (and hair), join in in the comments! 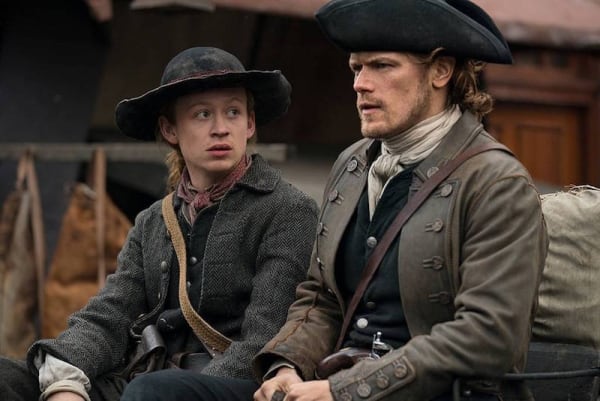 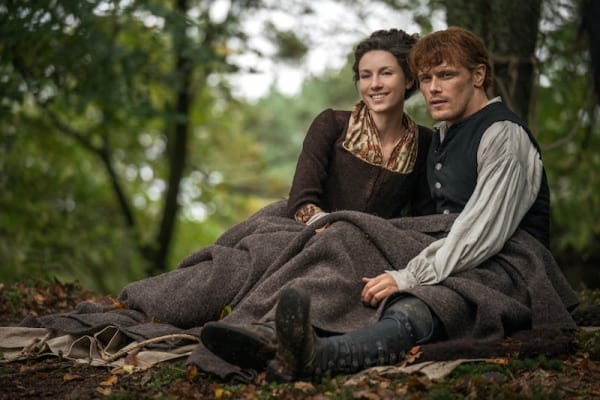 JAMIE’S BANGS ARE DRIVING ME CRAZY. IN EVERY SCENE, HE IS THE ONLY MAN TO HAVE BANGS. WHY? WHY????? (Oh yeah, there’s some practical clothing worn this season for traveling ‘n shit) 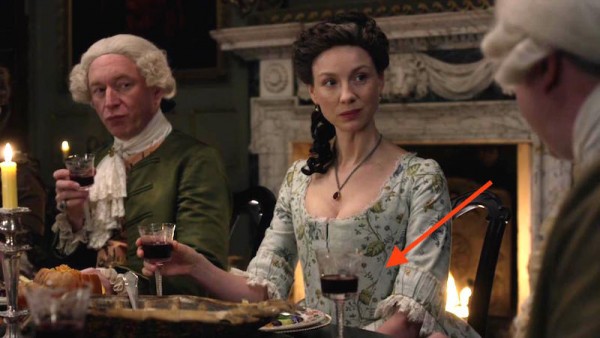 Claire is concerned this dress makes her look like mutton dressed as lamb. I’m far more concerned about the modern princess seams … but hey, maybe she suggested them to her dressmaker? 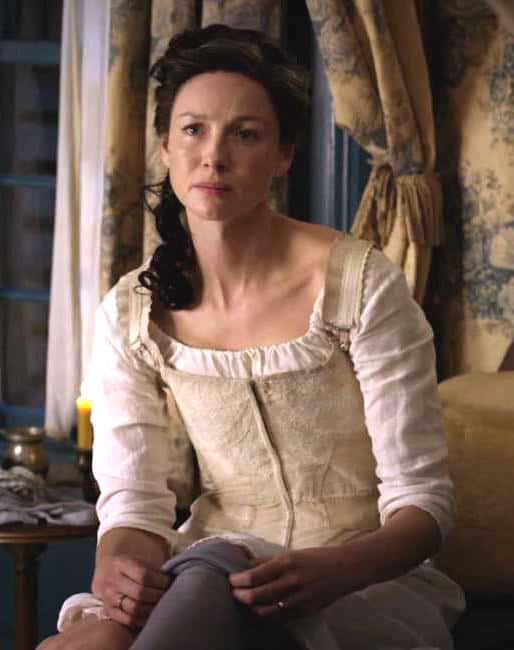 Is this Claire’s homemade corset from the 1960s? Because otherwise, I’m going to need someone to explain the garters as straps (seriously, those are elastic straps with metal clips at the end), and the fact that the below-the-hip portion isn’t split into tabs. 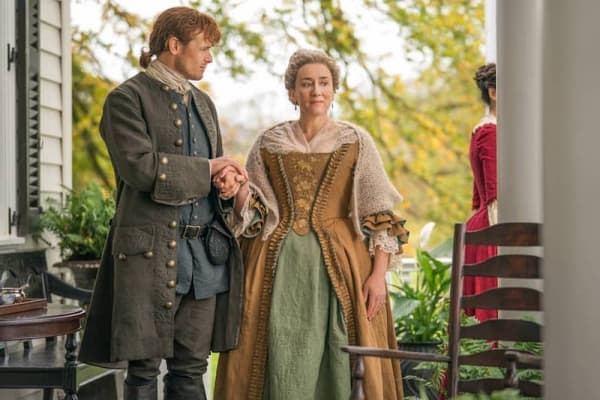 Auntie Jocasta (the fabulous Maria Doyle Kennedy). From a modern perspective, I love the stacked pleated trim with the hint of green poking out. Doesn’t seem very 18th century, but it’s NBD. I do note, however, that they’re very into pleated trims instead of gathered, which I wish we saw a bit more of. 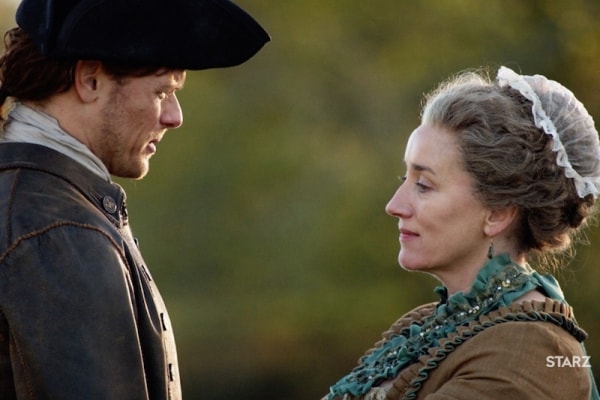 Jocasta gets some good caps, and she has this weird neck thingie. 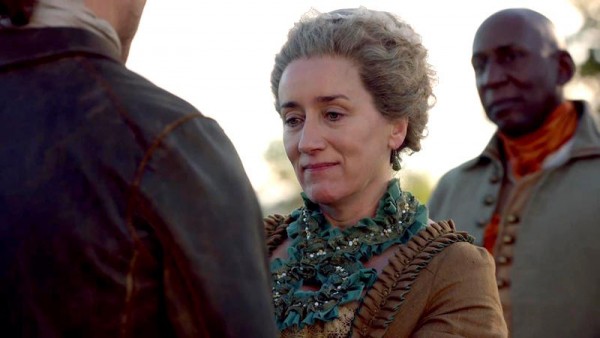 It’s clearly decorative and used as a fill-in. 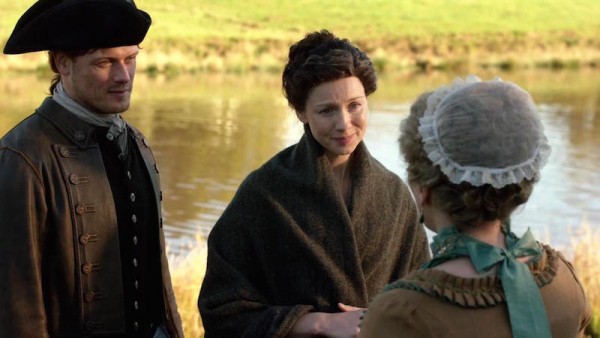 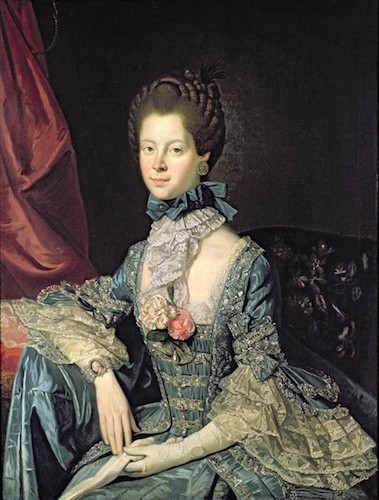 I’m used to seeing this kind of neck frilliness, but it’s usually in white lace, like this | Johann Zoffany, Charlotte of Mecklenburg-Strelitz, queen of Great Britain and Ireland, 1766, Holburne Museum 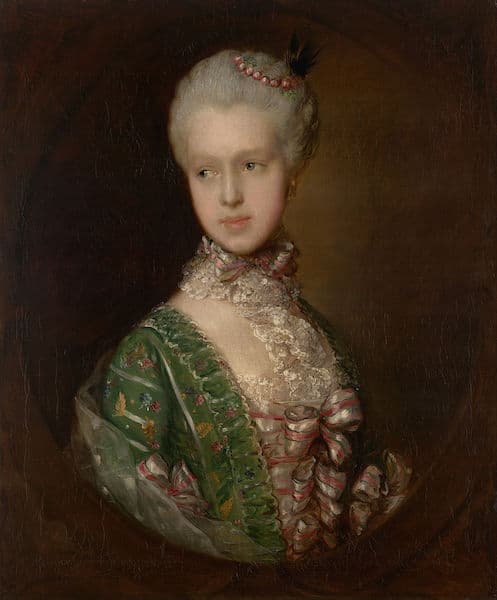 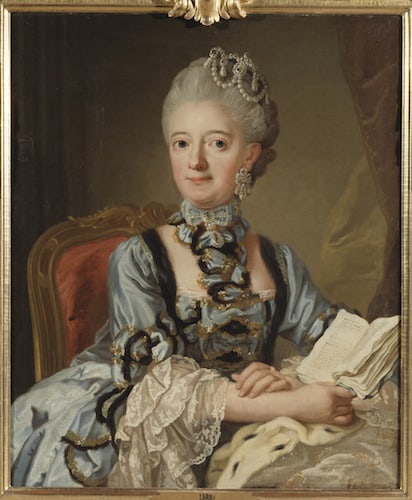 Okay, so I did find some examples where it WASN’T white lace, but then it usually matches the gown… | Lorens Pasch the younger, Lovisa Ulrika, 1720-1782, prinsessa av Preussen, drottning av Sverige, 1768, Nationalmuseum 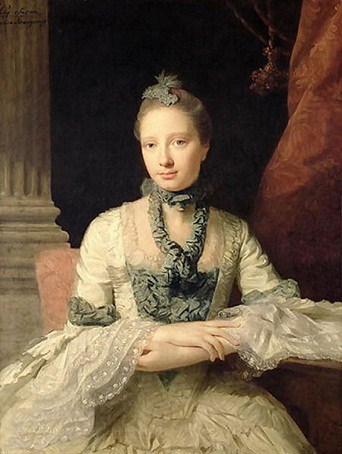 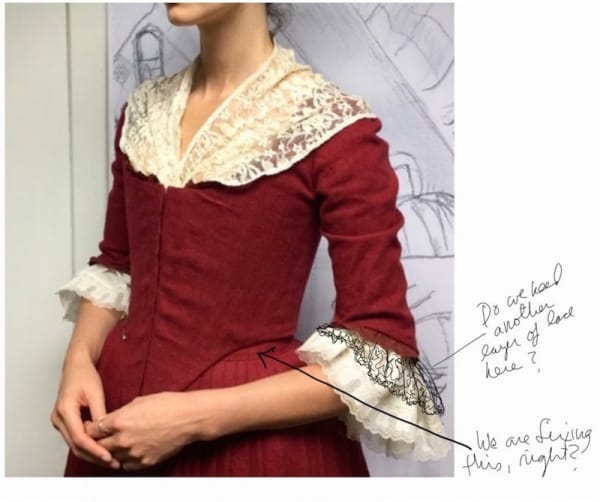 Whoever added this note about the waistline gaposis (“We are fixing this, right?”), I love you. 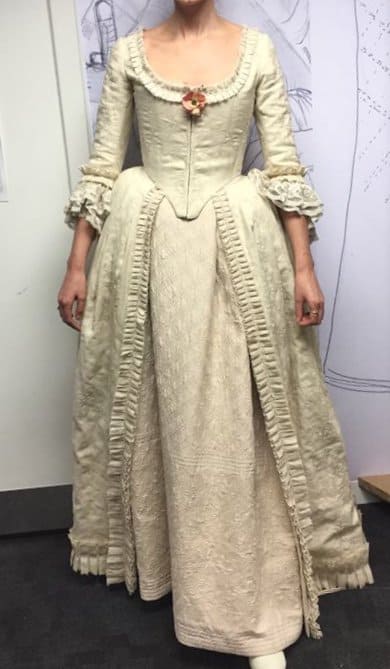 Claire’s party dress, storyline-wise altered from one of Jocasta’s dresses, before some puckering was fixed. 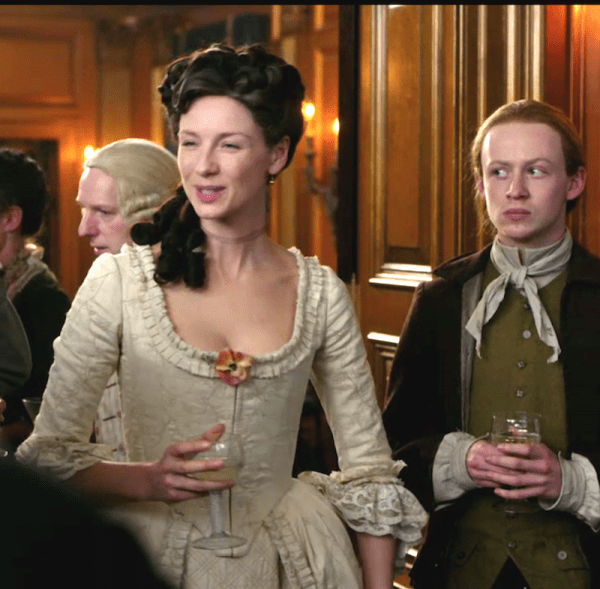 I’m pretty sure there’s some anachronistic princess seams in there, but I’m far more horrified by CLAIRE’S HAIR. SIDE PARTS WERE NOT DONE IN THE 18TH CENTURY. Another character snarked Claire’s hair in an earlier episode, they should have saved it for this. Yes, it’s very 1940s, but Claire just came from the 1960s, so where’s the bouffant (which would be much more in line with 1760s than this)? 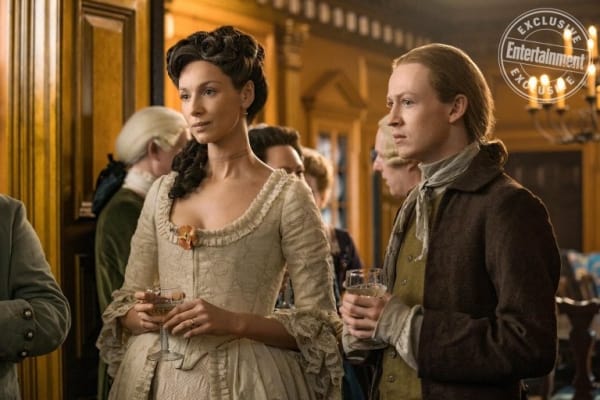 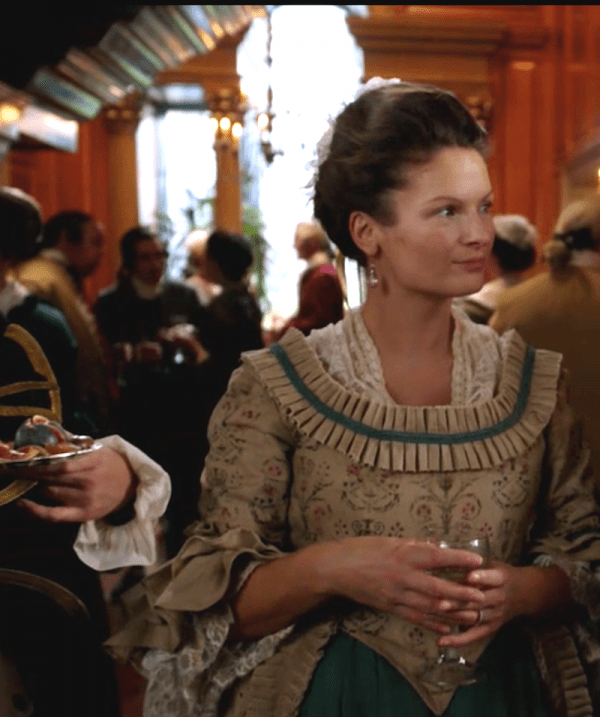 I just had to point out this extra from the party scene, with her too-high neckline, clunky neckline trim, and can’t-see-it-but-it’s-there back lacing. 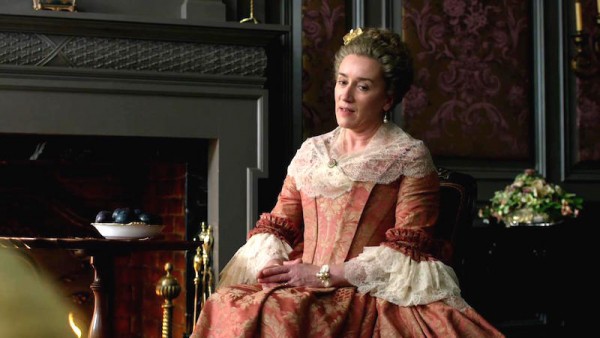 Jocasta’s party dress was lovely, even if the damask pattern is too 16th century. 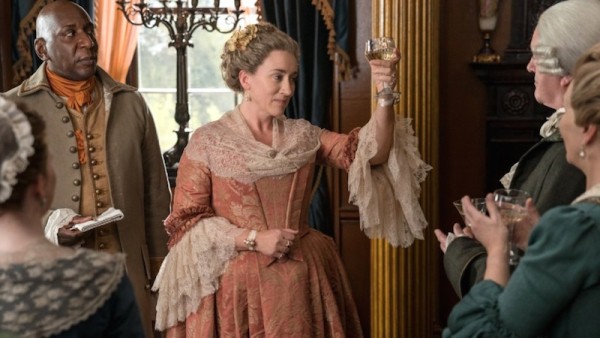 I loved all her fichus and accessories. 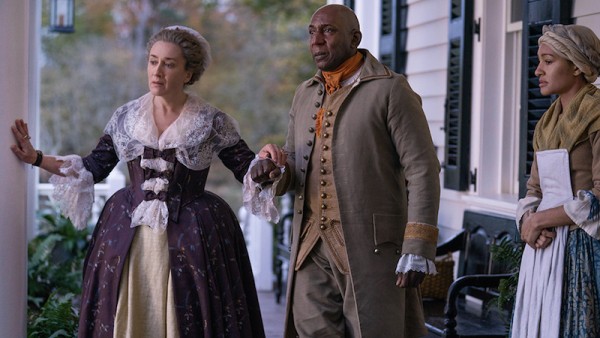 This dark purple outfit was SO great on screen. It’s totally evocative of period portraits… 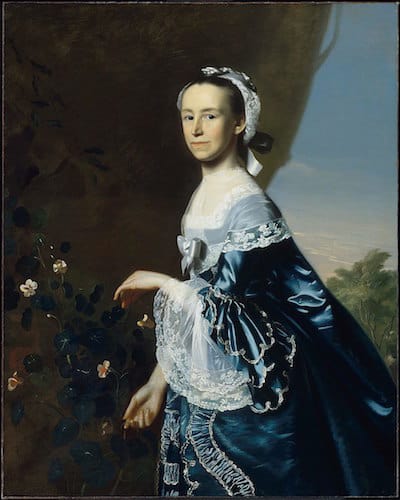 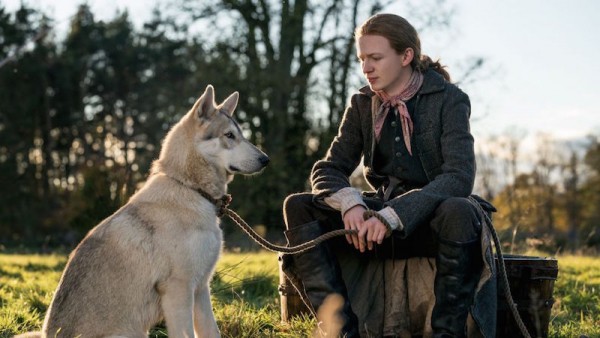 Who’s a good dog? Rollo is!

What’s your thoughts on the start of Outlander season 4?