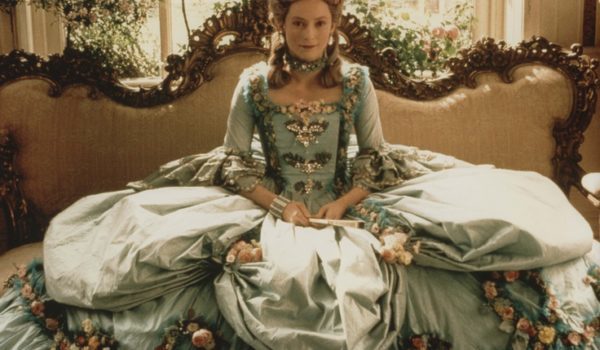 Recap from the first installment and second installment in this series: Orlando (1992) is based on Virginia Woolf’s 1928 novel Orlando: A Biography. Directed by Sally Potter and starring Tilda Swinton as Orlando, the story floats dreamily across 300 years of Orlando’s life, first as a man and then as a woman. Orlando never appears to age, owing to a magical slumber that happens every century or so, when he (then she) awakes refreshed in a new era. The film is broken up into segments with the years given to establish Orlando’s place in history at any given moment. This timeline is one of the reasons that this film has long been a costumer favorite, as the costumes, designed by Sandy Powell, range from the end of the Elizabethan age through to the modern era (well, the early 1990s at any rate). It is chalk full of eye-candy at every turn, but when I set out to write this post I realized that I would need to break it up into separate posts dealing with each of the eras, lest I overwhelm myself (and everyone else with me).

This isn’t necessarily the longest segment of the film, but it is the portion that has always received the most press, because the 18th century always sells. Also, Orlando is shown in only two different gowns, as opposed to the four from the 1600-1650 segment, and approximately six costume changes in the 1650-1700 segment. We also reach the portion of the film where I think the costumes take a bit of a hit in terms of balancing theatricality versus accuracy. Whereas in the first installment of this series I praised Sandy Powell for managing to preserve the historical aesthetics of the late Elizabethan Age even with a theatrical approach, I found that that the 18th-century costumes held up less well overall, treading dangerously close to Amadeus territory.

The section begins with Orlando, who had been living in Constantinople for the last however many years, having just reawakened from one of his naps to discover … He is now a she! 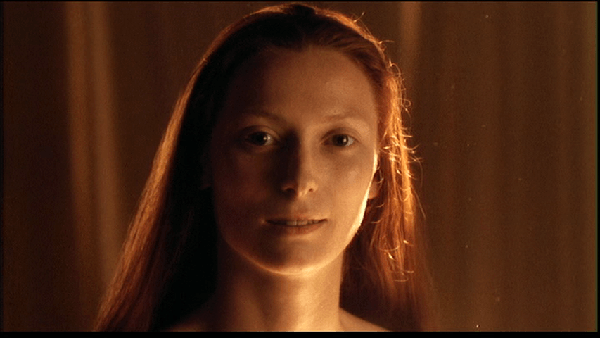 “Same person. No difference at all… just a different sex.”

In the book, Orlando joins a Bedouin tribe for a time, but then runs into issues with her moral upbringing conflicting with the conservative culture of the tribe, so she decides to return to England. The film omits this entire portion, but does show Orlando riding off into the desert on a camel, draped in black, headed for home. 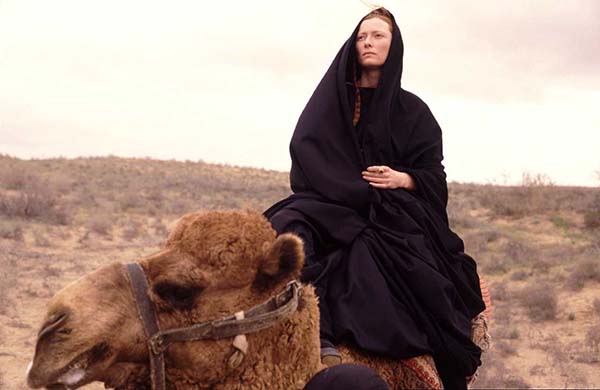 Back in England, Orlando seems to adapt to womanhood without much commentary (again, this dealt with at length in the book, but the movie barely gives an indication that she finds the clothing restrictive and difficult). 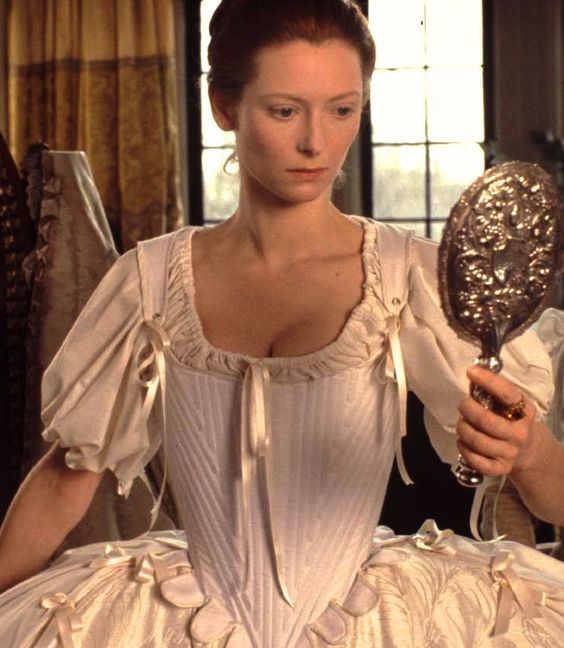 The stays look pretty similar to the ones in Period Costume for Stage and Screen: 1500-1800 by Jean Hunnisett. Wouldn’t surprise me at all if Hunnisett’s pattern was used. 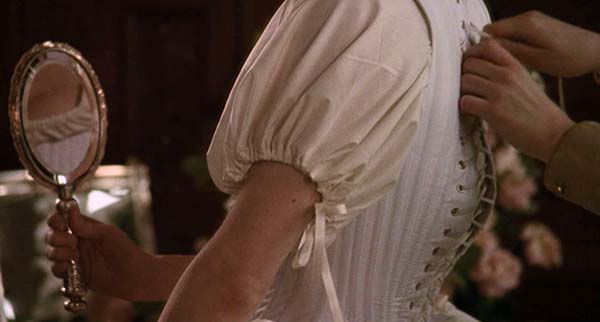 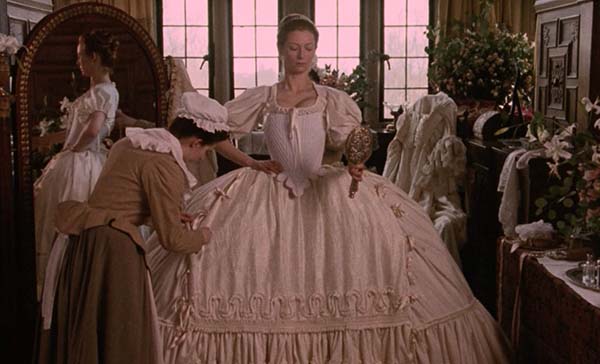 Orlando seems to just effortlessly glide into the role of an 18th-century noblewoman, though she does still have something of a “mannish” quality in her interactions with the male characters, namely Archduke Harry, who reappears and is surprised and intrigued by her metamorphosis.

I am honestly trying to refrain from too many “in the book” observations, but this is another simplification that Pointer made with the plot; Archduke Harry was originally Archduchess Harriet when Orlando firsts encounters her as a man and she decides to pursue him. It’s part of his justification for leaving for Constantinople, just to try to get away from Harriet’s unwanted advances. When Orlando reawakens as a woman, Harriet is now Harry, and still interested in Orlando; the implication being that Harry is also able to switch genders and move through time. It’s kind of a neat plot point that would have made for an interesting story arc in a film, but I get that Pointer left it out because it competed with Orlando’s story.

However, the one thing I enjoyed about the treatment of Orlando’s sex change and immortality is that it is acknowledged by other characters as only problematic in terms of her owning property. The fact that her property was entailed to her as a man (and likely with the “heirs male” stipulation), and that she is now a woman and, at this point, over 200 years old and therefore legally dead, is mostly just a matter of paperwork. 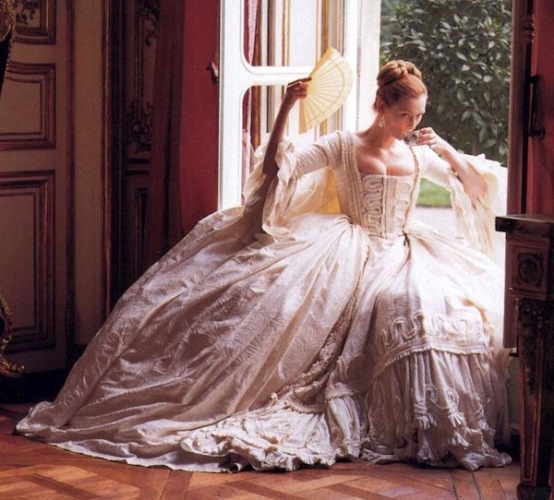 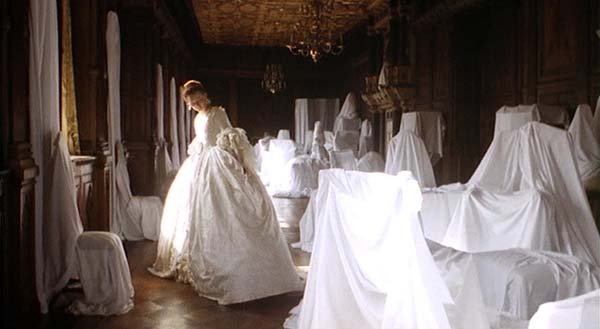 Orlando learning how to maneuver in enormous panniers. Panniers this size were worn, but usually only for special occasions such as court. 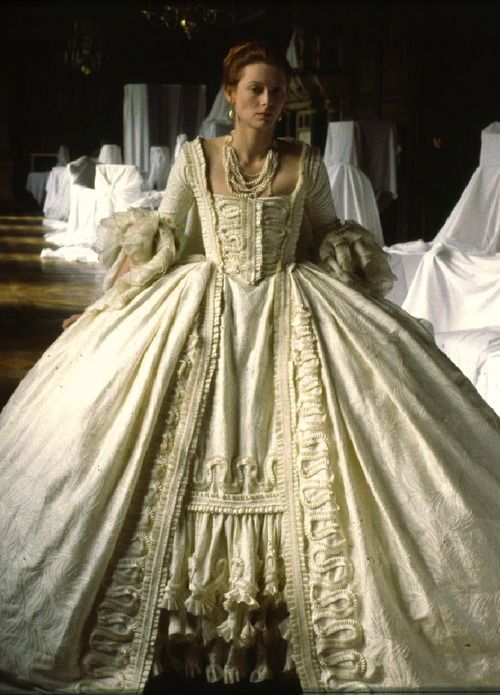 I’m on the fence about this dress, honestly. Something about the trimming on the petticoat just doesn’t sit well with me, especially when she’s in motion. 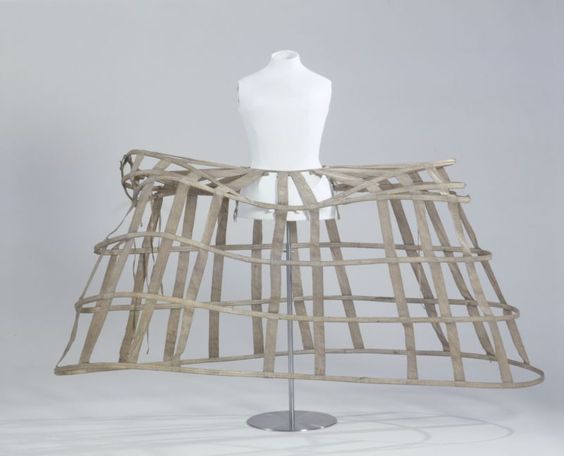 Orlando is still very passionate about poetry and literature, and attends a literary salon with the likes of Jonathan Swift and Alexander Pope. She hopes that she will be able to participate in the intellectual world, only to be disparaged to her face by the men, who think that women are basically idiots. She calls them on their hypocrisy in referring to their muses as female and then turning around and trashing womankind in general, but it doesn’t seem to phase them. Fed up with their bullshit, she leaves.

One of the timeline inconsistencies that is most obvious between where the plot identifies her versus what the costuming claims is here in this scene, where the gown Orlando wears is pretty solidly 1750-1760s in shape, but her hairstyle reflects the height of the 1770s. I doubt anyone thought about this choice as deeply as I am right now. 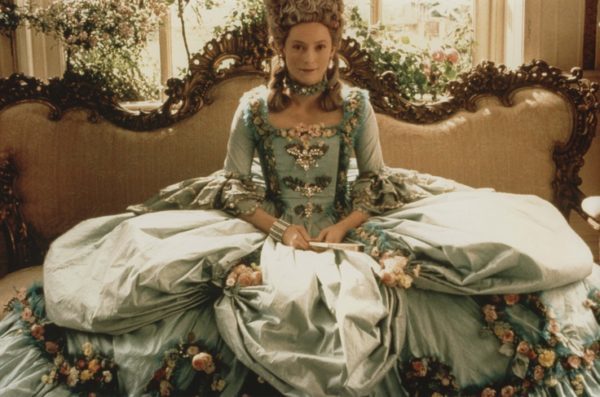 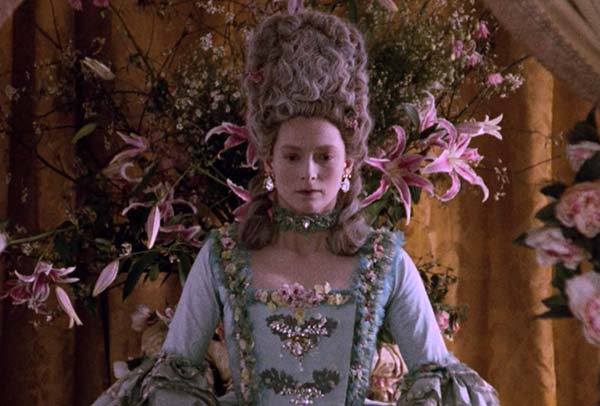 This is also the part of the film where there are some seriously questionable trimming choices being made on all of the costumes. 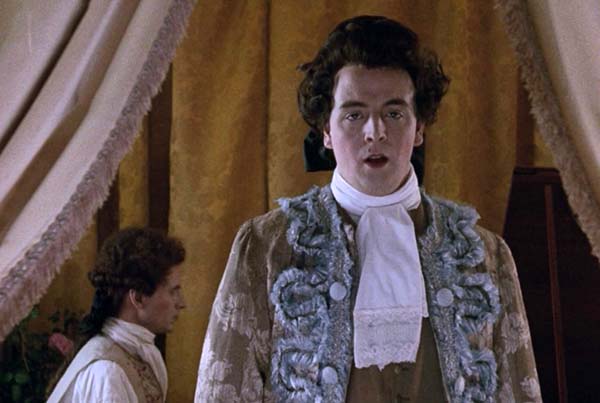 Ruched trim like this was something I’ve only seen on women’s clothes from this period, but I was like “Ok, it’s on the counter-tenor, maybe they’re just trying to make him extra effeminate.” 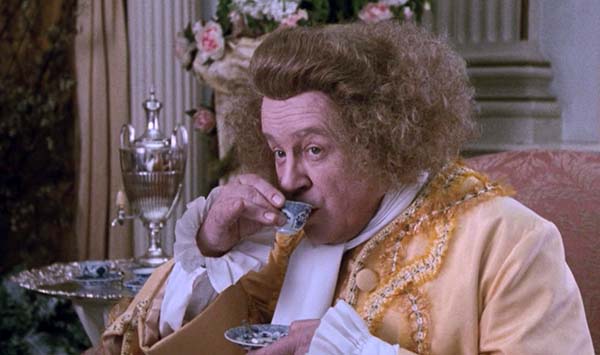 Except, it’s being done on almost all the male costumes. Hm. Not sure how I feel about it. 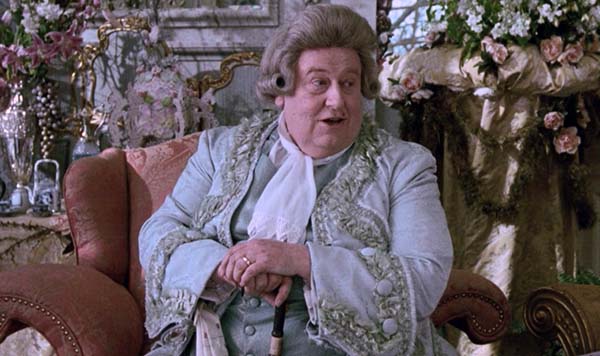 And here’s more ruching on Jonathan Swift’s jacket. I’m sure the decision to do it was to set this group of idiotic men apart, especially compared to the more restrained costume being worn by Archduke Harry. 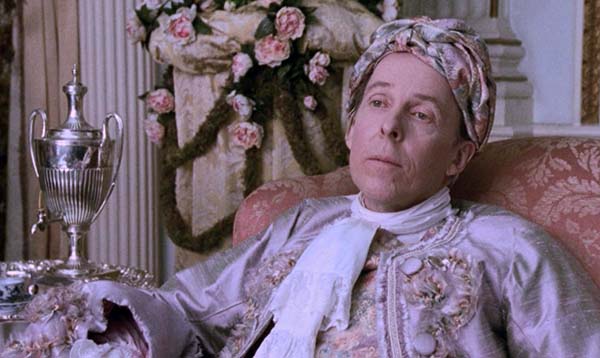 Meanwhile, Pope is wearing a turban that, I am dead serious, is out of the same fabric as my mother’s couches c. 1988. 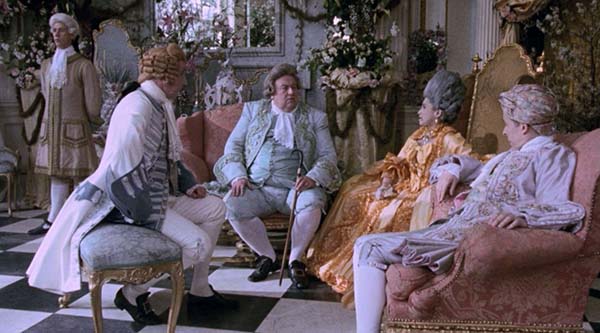 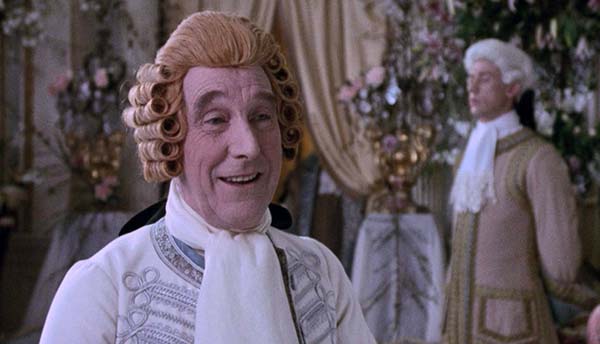 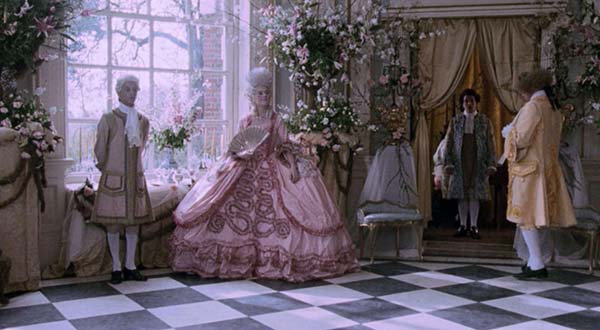 Plastic wigs on the extras. Sigh. 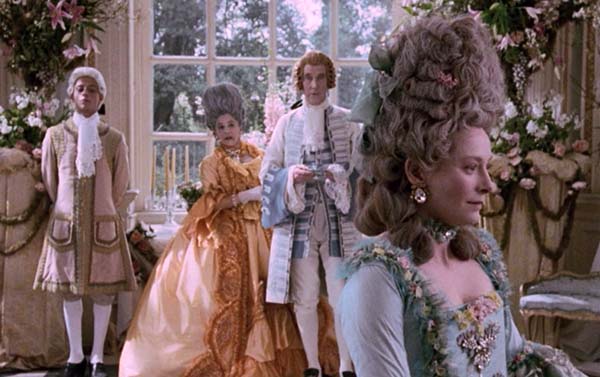 I do love Orlando’s wig, though. You never get a good look at the back, unfortunately. 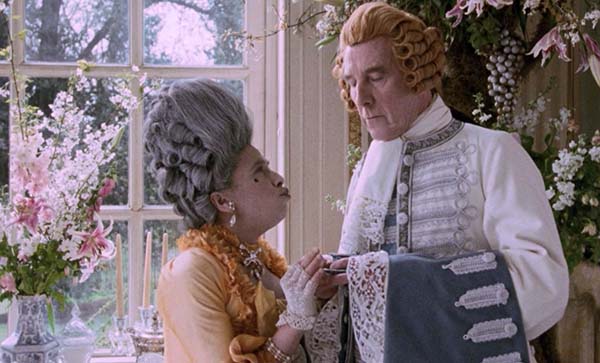 The Countess reminded me of a little toad in an orange sherbet dress. 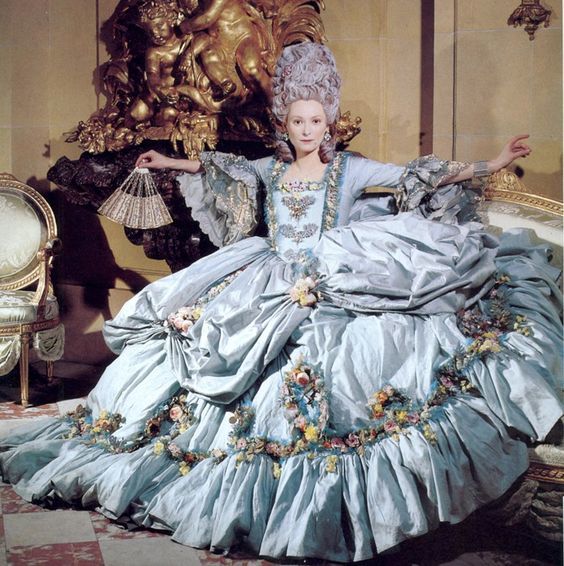 Having her intelligence insulted isn’t much fun, so Orlando bails on the salon, pursued by Harry. He is there when attorneys arrive and tell Orlando that she is now legally dead and can no longer own property in her own right; this leads Harry to propose to her, declaring: “Orlando, to me you were and always will be, whether male or female, the pink, the pearl, and the perfection of your sex. I’m offering you my hand.” 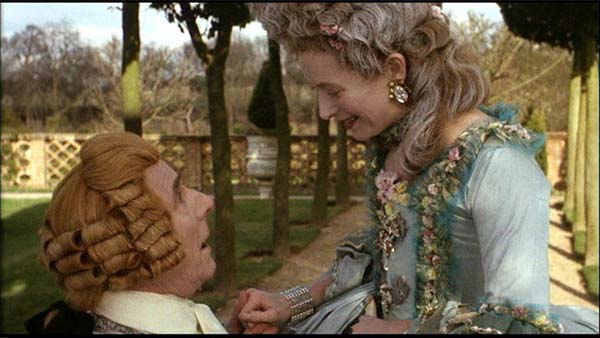 Harry is aghast at Orlando’s rejection and tries to berate her into accepting his proposal. However, Orlando has other ideas. She hikes her skirts up and starts running, straight into the labyrinth, in one of the film’s most iconic scenes. 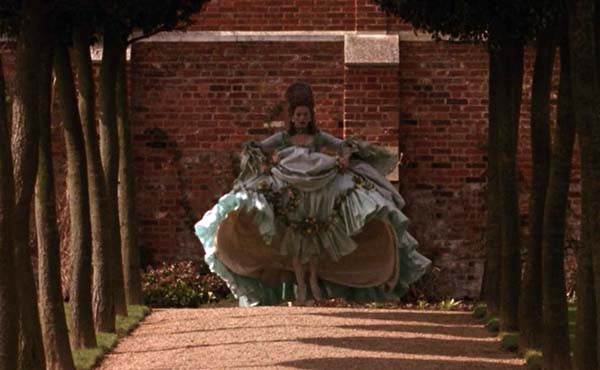 The only time when hiking a skirt is appropriate is when you’re trying to outrun a suitor who won’t take “no” for an answer.

And that’s where we will conclude this post, because the next period we end up in is the 19th century!

What did you like or hate about the 18th-century costumes in Orlando? Tell us in the comments!