With seemingly endless hours of historical costume movies and TV shows on Amazon Prime, Netflix, broadcast TV, actual movie theaters, et. al., we spend way too much time in front of a screen, trying to get through our backlog. Alas, not every flick set in the past is worth our time (though for ones we DO review, use the search box or menus to peruse the archives!).

Here’s a little behind-the-scenes info: There are a lot of snoozy historical costume movies and TV shows out there! We’re not talking Snark Week-worthy travesties — we LURVE watching those. But some stuff is too sad sack to bother with. These are boring movies, the dull shows, the ones with mediocre costumes and stories that can’t even rise up to the level of camp entertainment. Or the ones that are mildly entertaining, maybe have ‘good-enough’ costuming, or are moderately snark-worthy, but we can’t be arsed to work up a sweat about it. 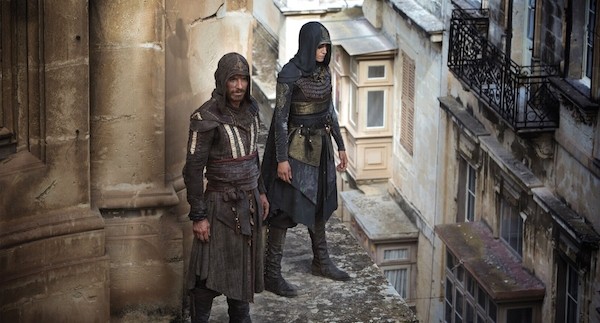 I’m sorry, I shouldn’t have even tried to watch this — and on a plane to boot! Michael Fassbender and Marion Cotillard are both hot as always, but all I got was boring action sequences and ridiculous conspiracy theories before giving up about 30 minutes in (I know, don’t watch an action movie if you don’t want to watch an action movie). The only “historical” costumes I managed to see were the classic Assassin’s Creed Hoodies(TM) in two different flashbacks to 1492 Spain (how do the Templars not know that there are Assassins lurking about, when the Assassins are always wearing the same hoodies?). — Kendra 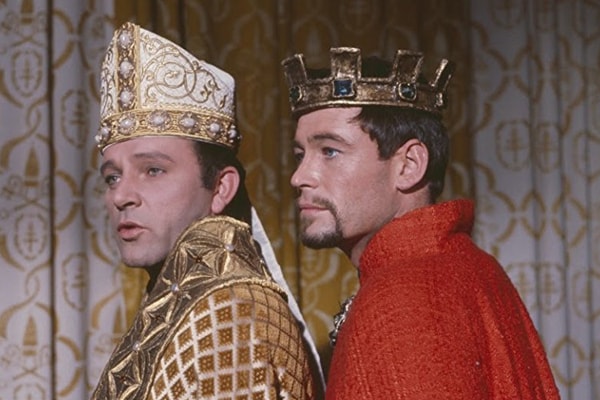 This is actually an excellent Oscar-winning movie, based on the play of the same name. Peter O’Toole plays King Henry II of England to Richard Burton’s Thomas à Becket, and they chew the scenery equally with brilliant dialog. This film is all about the words, so when it came to a Frock Flicks review, I got nothin’ costume-wise. See it when it shows up on Turner Movie Classics or download it for a good time! — Trystan 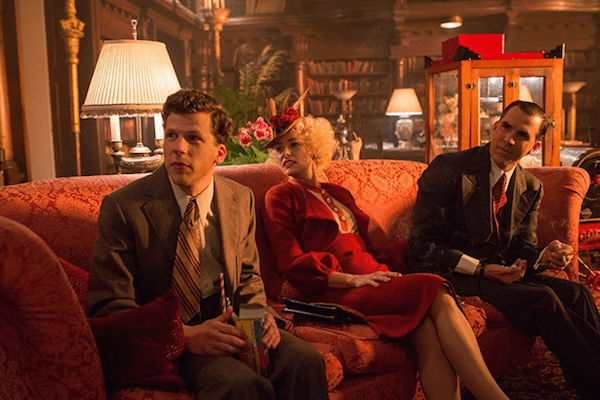 Another attempted plane watch (why do I make such bad choices?) that I aborted about 20 minutes in. Woody Allen’s look at 1920s Hollywood, in which thankfully he doesn’t act but still annoying employs a surrogate to essentially play himself as the lead. If I want whining, I can just listen to my own thoughts, thanks! — Kendra 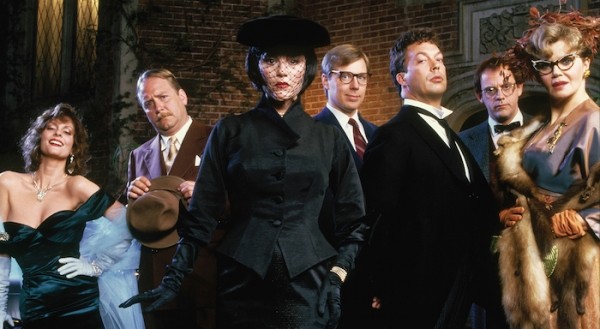 So apparently Clue is a cult classic? I saw it back in 1985 when it came out but have zero memory of it. Realizing it’s set in the 1950s, I thought I’d give it a whirl for Frock Flicks purposes… only to get about 20-30 minutes into it and realize I wasn’t even mildly amused. It’s too bad, because it’s got a great cast — Madeleine Kahn! Tim Curry! And I was pleasantly surprised that the costumes were actually quite decently 1950s — I was expecting a total ’80s-fest. In particular, I looooved Kahn’s black Dior-esque jacket. But that didn’t make up for the fact that I: 1) hadn’t even thought about laughing once and 2) didn’t care about any of these characters. — Kendra

I co-sign this review 100%. Apparently, I watched it when it came out and liked it, the cast is fab, but it doesn’t hold up. — Trystan 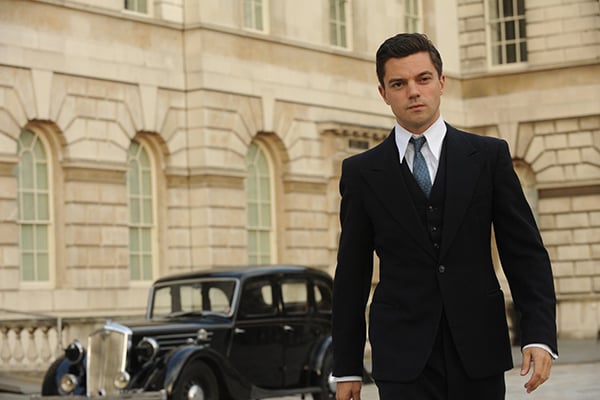 Miniseries purporting to tell the “true story” of the writer behind the fictional James Bond. But if Ian Fleming was at all like this, he was just an arrogant, sexist jerk. Which, honestly, is what Bond acts like and is only sometimes semi-acceptable in a campy sort of way, so watching the same actions set as a biopic is irritating. Pass. — Trystan 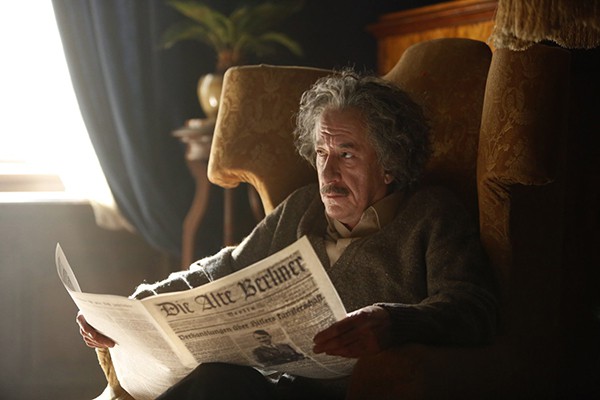 The first season of this NatGeo biographical series was an in-depth look at Albert Einstein, and at first I thought, cool, because I dig a combo of science and history. Plus, there was a neat promo video focusing on Einstein’s first wife Mileva Marić, who was a physicist and some suspect deserves partial credit for his early work. But the first episode of this series was all about the ugly old dude banging his hot young secretary (bonus for Kendra, he’s Geoffrey Rush!), and I don’t care how accurate that may be, it’s not a trope I care to indulge in. NatGeo announced that the second season of Genius will be about Pablo Picasso, so really the show should be titled “Genius Horndogs.” — Trystan 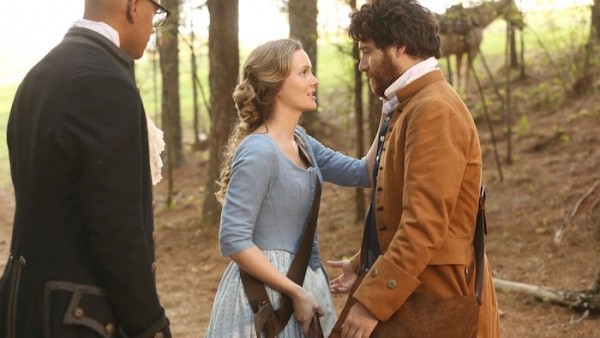 Guys. I’m totally down with the comedic-take-on-history, and I will admit to having a weakness for (decently done) bro humor. So when I heard about Making History — essentially, a comedy take on the whole time traveling to fix history à la Timeless — and the fact that it starred Adam Pally who I LOVED on The Mindy Project, I was in. Well, I made it through two episodes and I can tell ya, just don’t bother. The humor is lame (oh ha ha! he drank from the chamber pot!), the history is wrong, the fact that it’s set in New England but clearly filmed in Southern California drove me crazy, and Leighton Meester as Deborah Revere (daughter of Paul) has the SHITTIEST, princess seam-iest costumes as well as your platonic ideal of princess hair when you were 12. — Kendra

Kendra is a stronger woman than me. I made it through 15 minutes of the first episode and noped-the-fuck out. No shock the series was cancelled. — Trystan

The Marquise of Darkness aka La Marquise des Ombres (2010) 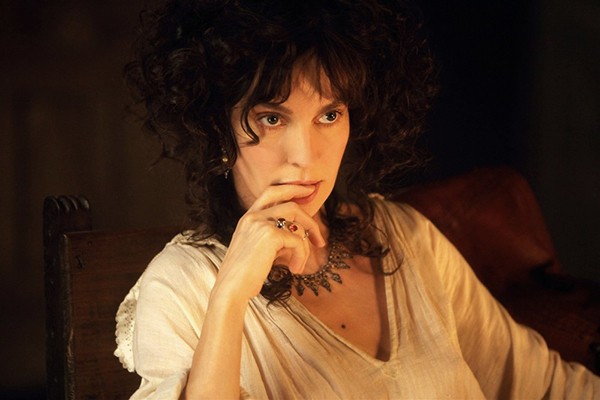 Based on a true, supposedly fascinating story of Marie-Madeleine Dreux, Marquise of Brinvilliers, who was executed in 1676 for poisoning her father and two brothers with the help of her lover. Some pretty costumes here and there, a lot of hair flying around, but slow as mud story. Anne Parillaud, as the title character, is flat and inscrutable, not passionate or calculating enough to make sense doing any of the things she does. There’s a couple of weird sex scenes, but I didn’t find them hot enough to make the film worth my time. — Trystan