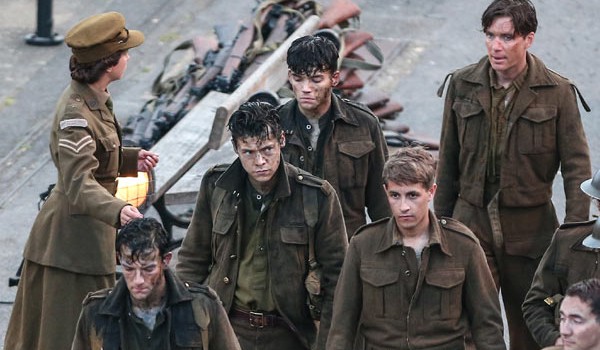 A great many historical costume dramas are war films, like Dunkirk (2017), with TV costume dramas about wars being only slightly less common. Yet we hardly ever review them here on Frock Flicks for two main reasons that are at the core of what we are interested in doing day in and day out.

We are three women, and we enjoy watching historical movies and TV shows that tell our stories too. 99% of war films focus on male soldiers, men fighting, men’s dramas. Women have been involved in wars since the beginning of time, on the battlefield, either fighting or nursing or aiding in other ways, and on the homefront — but women’s wartime POVs don’t get told very often on film. Just one example: Dunkirk has a cast of 45 men and 2 women, who play the nameless roles of “nurse” and “stewardess.” UGH.

I appreciated series like The Crimson Field (2014) and ANZAC Girls (2014) for focusing on nurses during World War I (both produced as part of all the WWI centenary content in the UK). Mercy Street (2016) tried to do a similar thing by showing an American Civil War hospital, but the ratings weren’t impressive. The problem is that so few attempts are made, one high-profile failure like Mercy Street makes a negative impact.

Btw, there are plenty of real stories about women who disguised themselves as men to go to war, dating back centuries. Hey, Hollywood and the other Powers That Be, why not try that for a movie or TV miniseries for a change? Just an idea.

Uniforms don’t give us much to talk about

Even if / when we do watch a war movie, we’re not going to have much to say about it for the blog. What we do here is discuss costumes, and the main costume in war movies is military uniforms. None of us are experts in uniform details, and even if we were, there isn’t a ton to say because there isn’t a ton of variety in the historical costumes. It’s pretty straightforward stuff.

Recreating a military uniform requires researching the specific uniform and getting that outfit correct. Done! I’m NOT saying it’s always done right or it’s necessarily easy (military types will nitpick the issue to death!), but I am saying there’s no room for interpretation on whether it’s historically accurate or not. That’s not a matter of debate. It’s more like a catalog of “nope, that’s not the right insignia, that’s the wrong band on the hat, blah blah blah.” The issue is fairly black and white.

Whereas civilian clothing has a lot of wiggle room. You can research the time, place, social status, and say a character could have worn something like XYZ, but other than recreating a specific actual historical person from a photo or painting, there’s a lot of room for interpretation and creativity. That’s where we have fun of commentary, critique, debate, and snark! That’s pretty much the space where this blog lives.

And let’s not forget that uniforms, by the very definition, are there to make people look the same, so we’ll have less to talk about. You have your good guys and your bad guys and the different ranks within them. OK, done. Compare to civilian clothing, even in one period, one geographic area, one social class, you can still have nearly infinite variations of costume to choose from for a family or town. More stuff to look at, more stuff for us to write about.

Are you a fan of historical war movies or not?