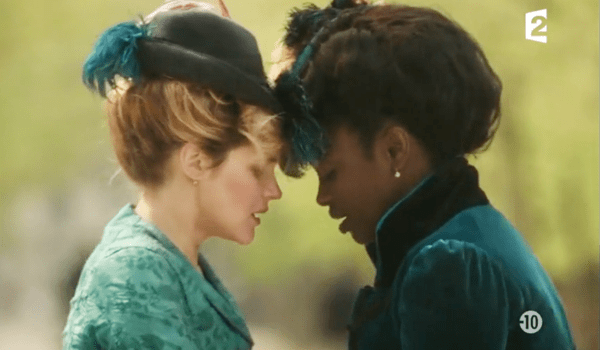 Yes, as Mystère à la Tour Eiffel (2017) is ‘the Victorian interracial lesbian murder-mystery movie you’ve always wanted,’ just like The Mary Sue, Medieval POC, and everyone else has said. This French-language TV movie certainly delivers on both a classic murder-mystery story and an interracial lesbian romance set around 1890. The only problem I can admit to is the trouble you’ll have finding it to watch. I’m not usually one to promote an illegal download, but that’s how I found it, thanks to one of our readers sending us this link here, which is buried in comments on our site somewhere and I’m just bumping it up a bit. You’re on your own for figuring out the player and how to make the subtitles work (note: that took me only a short bit of googling :). But I think this frock flick is worth it!

At about an hour and a half, the story moves along at a sprightly clip, introducing Louise, a divorced artist and the daughter of one of the architects who worked for Gustave Eiffel on the Eiffel Tower. While she’s trying to avoid another dull marriage foisted on her by her father, she flirts with an exciting magician’s assistant, Henriette. However, a series of murders begin around Louise, the first being a co-worker of her father, then her father, followed by another of her father’s co-workers. The police suspect Louise, although Henriette attempts to distract her enjoyably. Alas, Louise is thrown into a lunatic asylum, where a sympathetic doctor hypnotizes her to help her remember what happened at the time of the murders. She escapes the asylum and tries to prove her innocence with Henriette’s help, and you’ll have to watch for yourself to see what happens. Though I can say there’s satisfying ending. 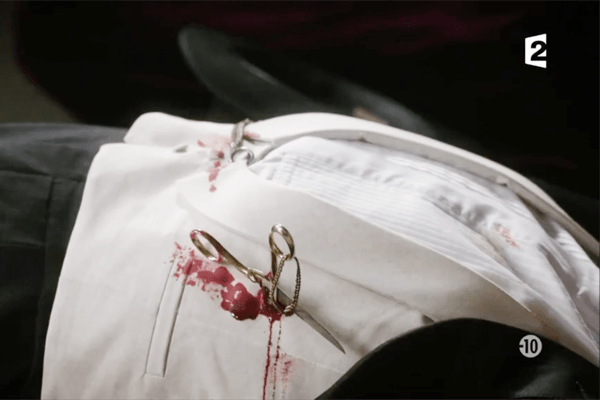 I adore that the first murder is by scissors :) 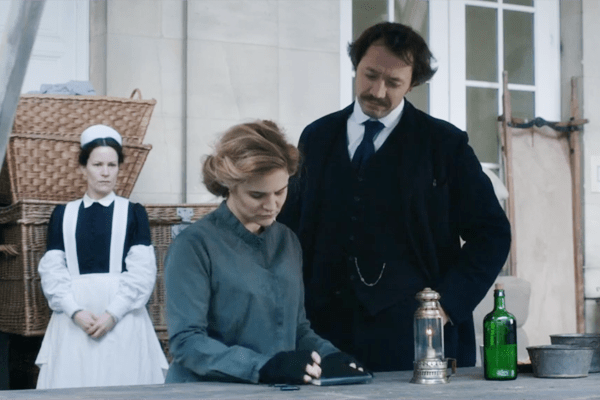 The asylum scenes are appropriately grim, but there’s the one doctor who’s all up on the latest science-y matters. 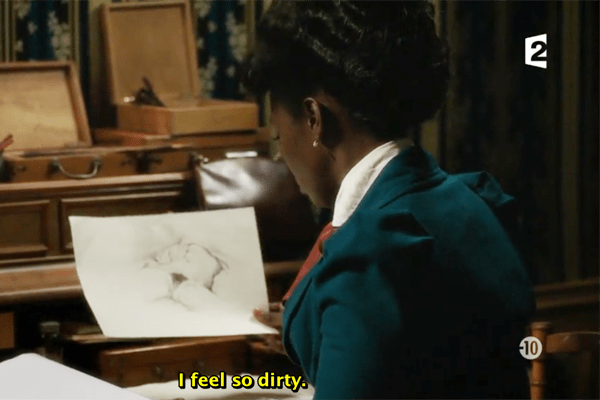 We get a quick peek at Louise’s art portfolio, and it appears she had some kind of girl crushes before Henriette came along. The caption is Louise referring to her time at the asylum, but really.

Two women walking arm-in-arm in public would be NBD in the 19th century, but in this story, it has added meaning. 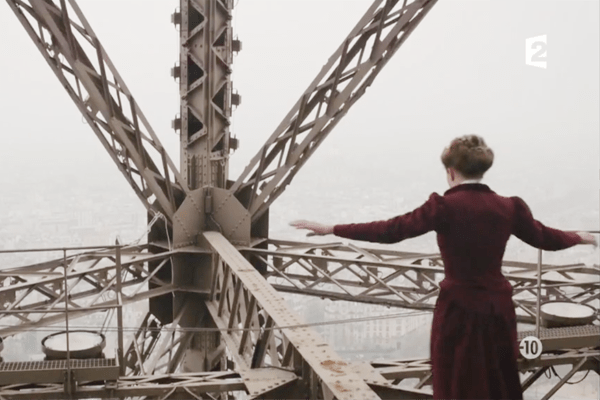 There’s an exciting conclusion on the tower beams…

Pierre Canitrot designed the costumes for this and the TV movie Mystère à la Opera (2015), another in this series of historical murder-mystery films set around famous landmarks. Likewise, key hairstylist Sylvain Lemarcis worked on both movies. There is a solid level of workmanship to the late Victorian costuming and hair throughout this film, which is impressive for what doesn’t appear to be a big-budget effort. I suspect there were a lot of rentals used, but they were well-chosen and properly accessorized. The only quibble is that Louise tends to not wear a hat very often outdoors, when she typically would (and when other women are shown wearing hats, including Henriette). It’s kind of a main-character thing. At least her hair is beautifully styled for the period.

Henriette wears an purposefully “exotic” stage outfit, but she points out that it’s “for the tourists” and referencing the 1889 Exposition that the Eiffel Tower was created for. Millions of tourists came from all over the world to this event, which featured exhibits from 35 countries. The village nègre (negro village) contained at least 400 indigenous people as a display of colonial power. It’s a practical choice to cater to the Exposition crowd with an African-esque stage outfit, and luckily Henriette’s everyday clothes are not tokenized.

In fact, Henriette’s outfits are perfectly ordinary, as are those of the other lesbians at the club she takes Louise to for a drink and a dance. There’s none of the cliched attempt to dress any of the women in more “masculine” or “butch” clothing. All of them, Louise, her friend Charlotte, women passing by on the street, are wearing typical 1880s-ish fitted walking suits or bustle gowns. None are especially fancy or frilly because this movie has no formal dinners or balls, and all the characters are of solid middle-class, so there’s no need for extravagant high fashion. The clothes aren’t dull, just proper and smart without trying to convey any hidden meanings. 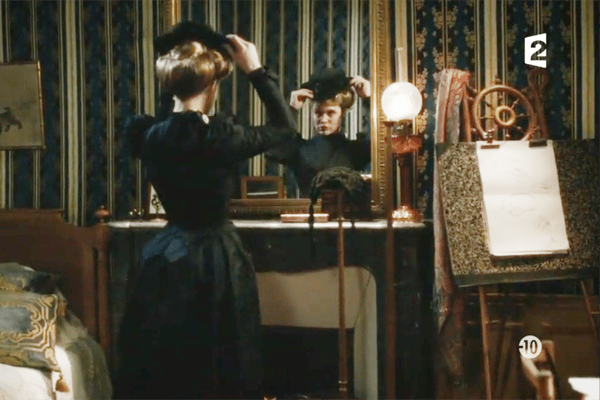 Louise tries on two hats, but doesn’t put them on when she goes out for the evening. Huh? 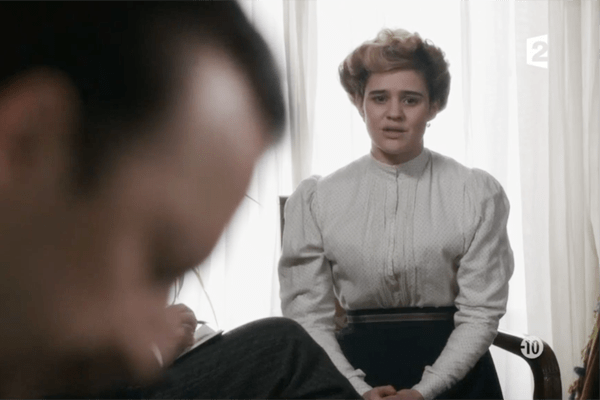 She wears this sort of pigeon-front blouse with a walking skirt and a fitted jacket most of the time. 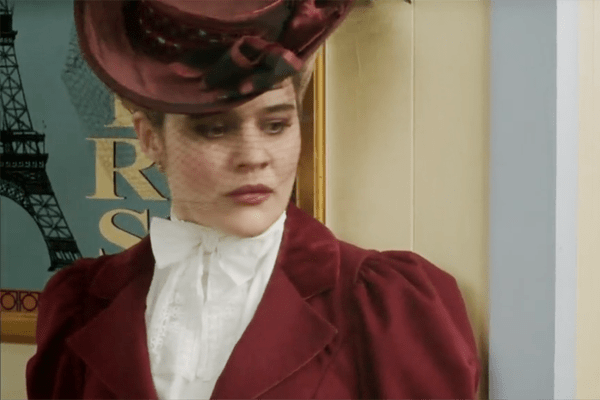 And in red, finally with a hat. 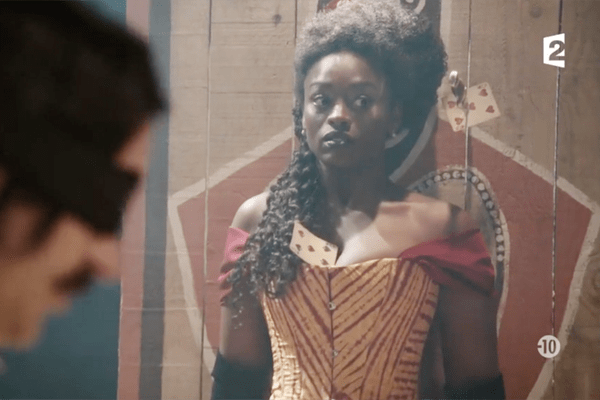 Even though it’s a stage outfit, I do think she would be wearing a chemise of some kind (those red bits are just attached to the corset). 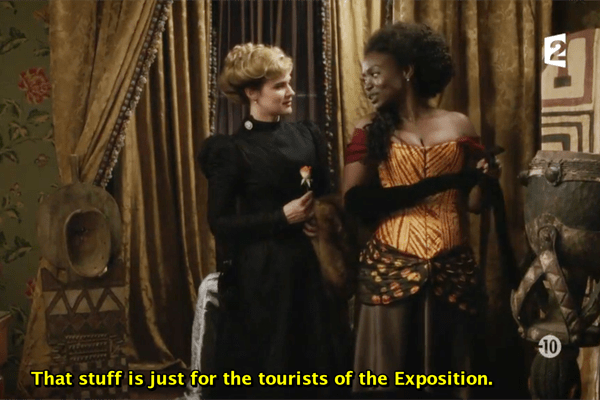 Henriette explains her outfit and the other faux-African paraphernalia. 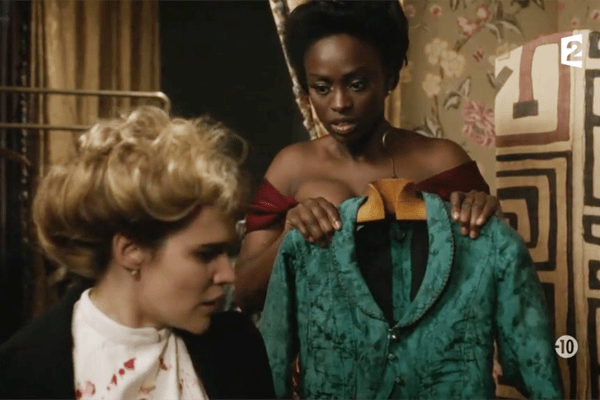 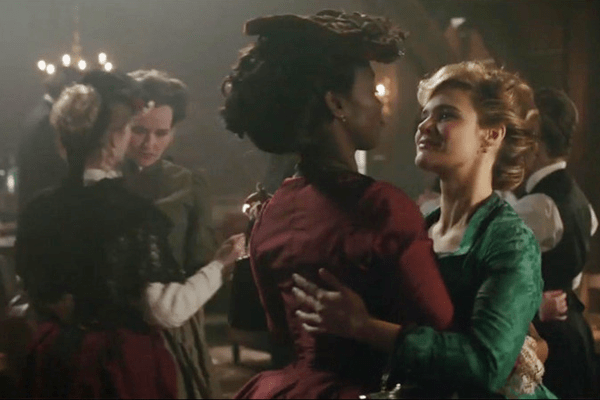 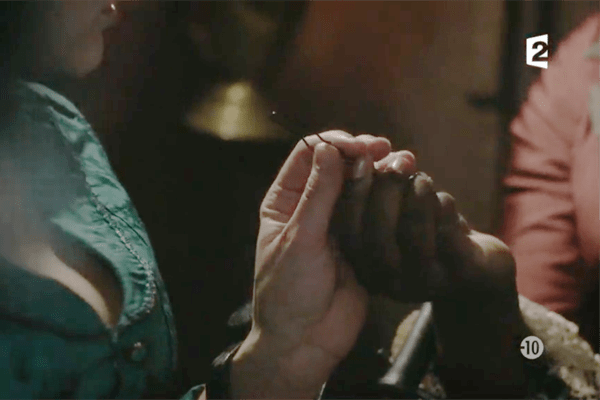 In a key scene, Henriette uses a hairpin to pick the locks of their handcuffs. SEE? Hairpins are useful for so many things!

The pair are trying to get past the police back to Louise’s father’s house — this gives a good view of their outfits too!

Mystery! Romance! Period costume! What more do you want?

Will you be bothering to download Mystère à la Tour Eiffel too?