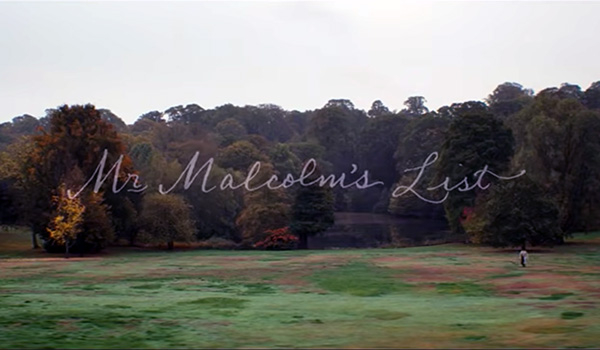 We somehow missed the short film Mr. Malcolm’s List (2019) when it first came out. Well now filming on the full-length film has wrapped an it’s in post-production, with a tentative release in 2022. The short film is a charming preview of the feature film, although Constance Wu will take over the part of Miss Thistlewaite, played by Gemma Chan here.

For about 10 minutes of frock flick, there’s actually a lot of frocks to talk about here! There are several changes of clothing for the main characters, we see proper undergarments, and the hair is mostly dressed in period fashion (with one glaring exception). 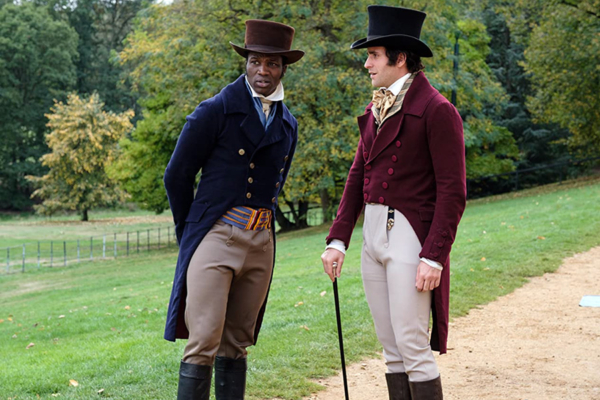 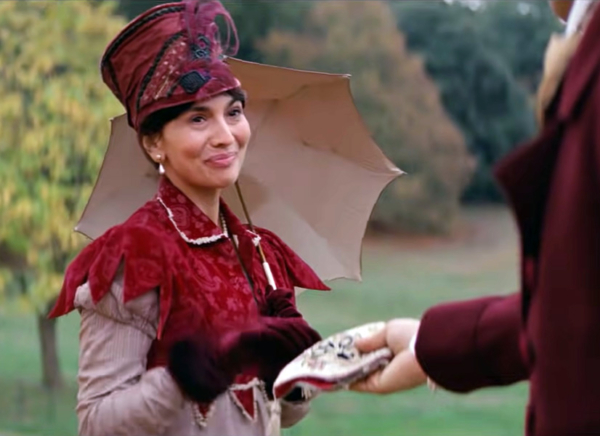 This lady tries to get Mr. Malcolm’s attention. I’m checking out her hat & capelet.

Mr. Malcolm is the main gentleman of interest, a Miss Thistlewaite tries to secure his affections. She’s rich, spoiled, and has sassy maid and footman. 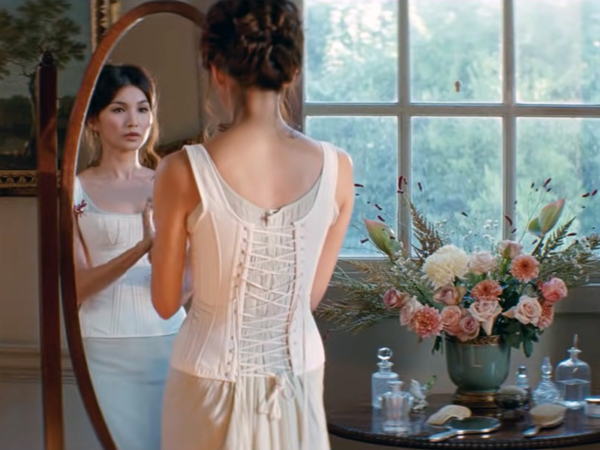 Correct Regency corset with a smock underneath! 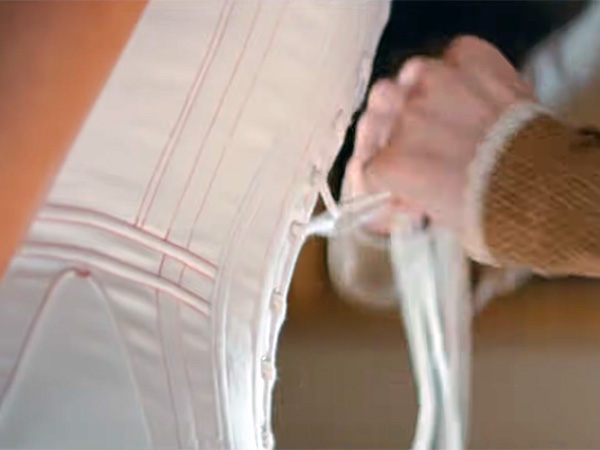 But *nooooo* she tells her maid to pull the laces tighter, when this isn’t a tight-lacing era & this style of corset isn’t built to withstand tight-lacing :( :( :(

Oh well, she does look nice at the opera, in this gown that’s been recycled from other frock flicks. 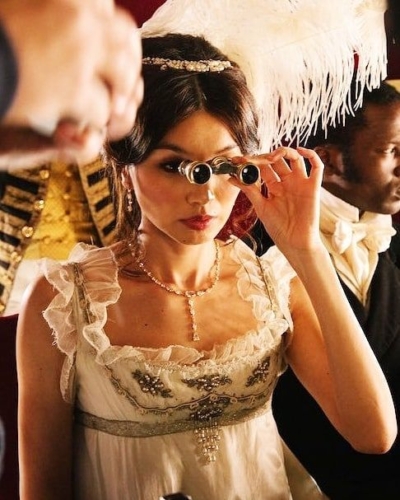 Then she gets snarked on by a mom who’s pushing her dullard daughter out on the marriage market. 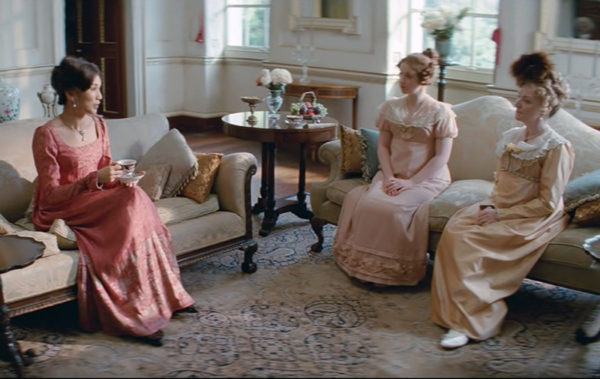 I’ll guess that these are also recycled costumes, but they look sharp & are accessorized well.

Between that and hearing from Malcolm’s friend about his notorious “list” (although we never hear exactly what’s on the list), she decides to get revenge on the dude by … inviting her country cousin to town? IDK how that’s supposed to work … 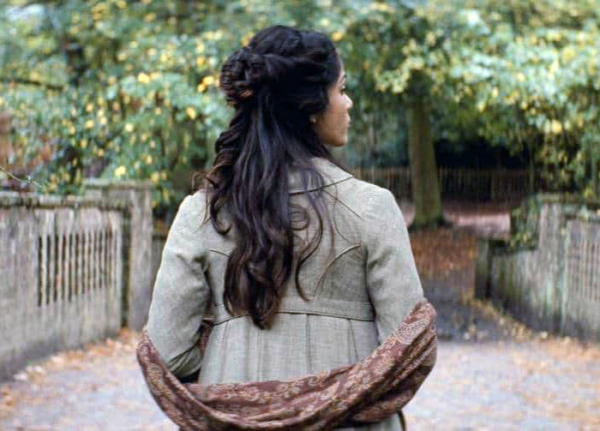 She’s from the COUNTRY, where they have no hair pins, of course! 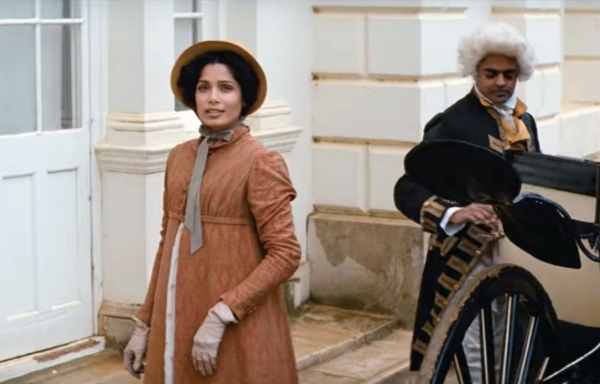 Thank goodness she finds a few pins & a bonnet so she can go to town, whew. 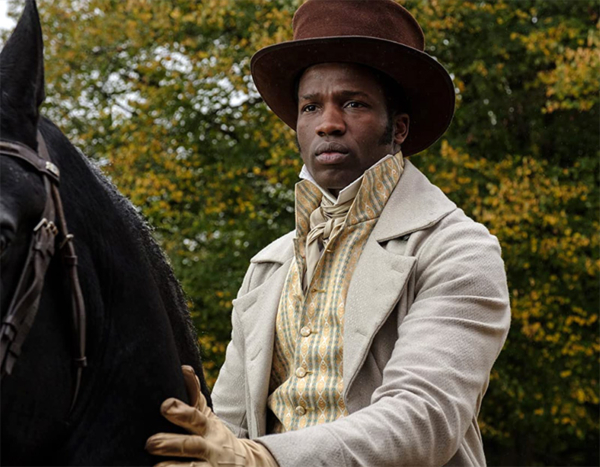 While I’ve just talked about the costumes and plot, it’s also nice to see diverse casting in this short film (and the feature length version seems to have the same diversity). Lest someone whine about this being ‘woke,’ director Emma Holly Jones said in Free the Bid how she and her team were grounded in historical research:

“We wanted to make the look of this film fresher, but still authentic. We researched 19th century West Africa, China, India and inserted elements into costume, production design, hair and makeup. I wanted to create what Julia would have looked like if she were British-Chinese in 1818, which, on another note, is not fiction — there was great diversity in 1818, it’s just that movies and TV have painted it differently.”