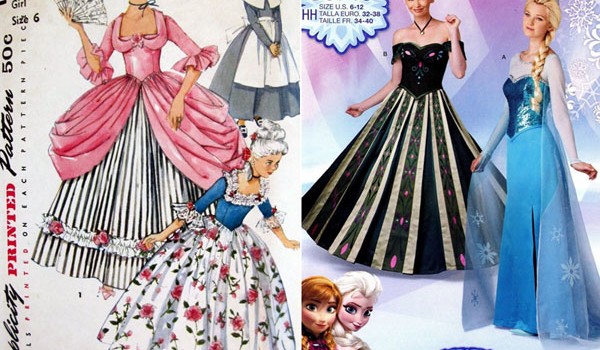 You may think that patterns inspired by movies is a relatively recent thing, but it’s really not. For just about as long as there have been both pattern companies and Hollywood, one has been referencing the other to some extent. Here’s a trip (in more ways than one) down memory lane in the form of vintage patterns inspired by film. 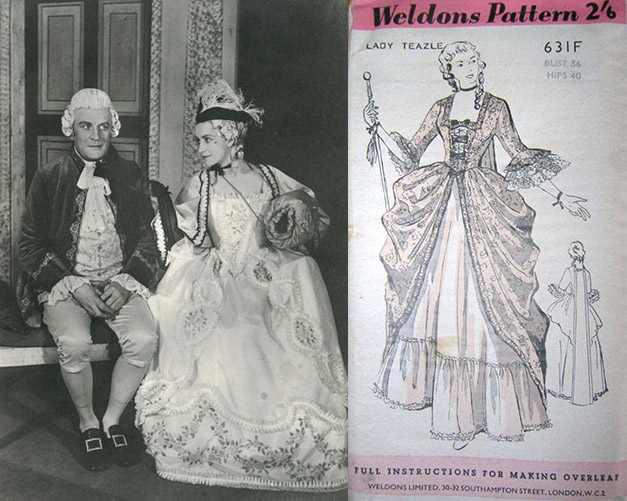 While the 1930 pattern above is probably a direct result of the 1930 film version of The School for Scandal, starring Madeleine Carroll as Lady Teazle, I opted instead to use an image from the 1933 stage production starring Peggy Ashcroft. Mainly because there’s hardly any still images of the costumes from the 1930 film, as pretty much all footage is lost aside from some promotional stills. What few stills there are out there are very much locked down by the British Film Institute (you can view them here). At any rate, The School for Scandal was one of those enduring plays-turned-films that mysteriously has fallen out of favor in the last few decades after a, literally, 200-year run. Written in 1777, it is pretty darn raunchy and ribald, loaded with sexual innuendo that often times is not exactly subtle. It probably deserves a revival. 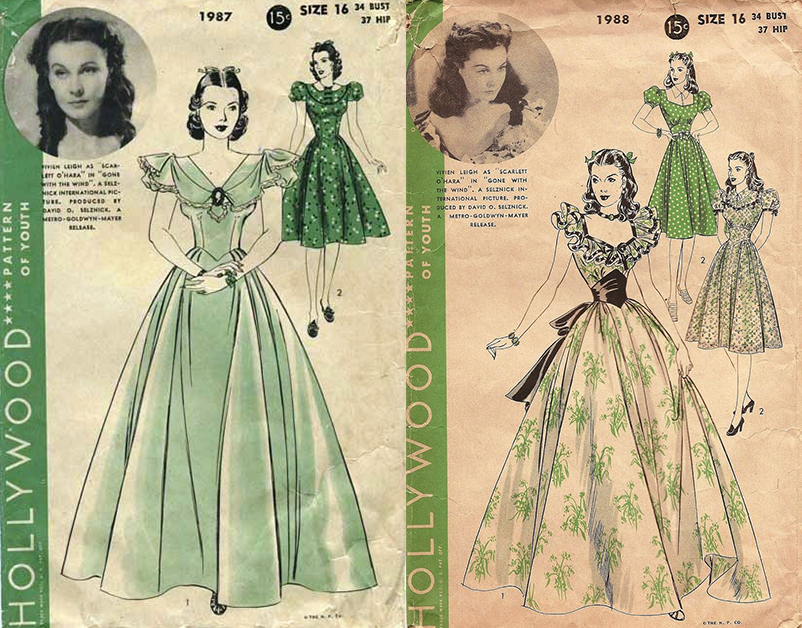 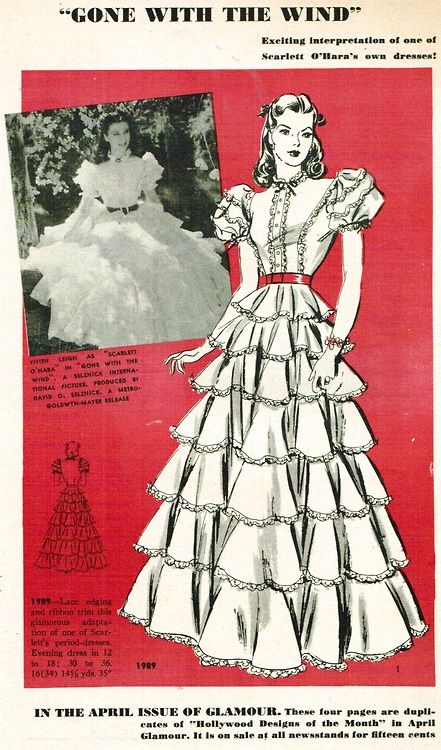 The 1930s and ’40s saw several pattern lines launched with specific tie-ins to popular stars at the time. Hollywood Pattern was by far the most committed, producing patterns associated with virtually every starlet who was popular from the late ’30s to the early ’50s. Most of the Hollywood Patterns were actually not historical costumes, but more modern, either based on something the featured actress wore in a popular film or something inspired by the fashionable clothing at the time. One of the biggest exceptions, however, was Hollywood Pattern’s “Gone With the Wind” line, which featured these three looks inspired by costumes from the film. The patterns included both full-length gowns and shorter modern interpretations. 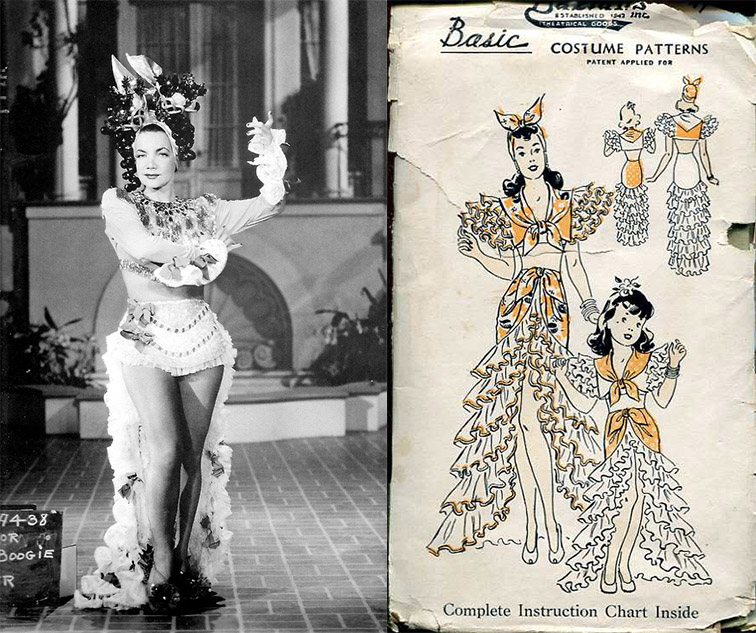 This is just one example of a number of Carmen Miranda-esque patterns that were released in the 1940s and 1950s. It’s more loosely based on designs than a direct copy of any single costume Carmen wore in any of her numerous cameos during the WWII era. However, the famous I Love Lucy episode “Be a Pal” (1951), where Lucy wears the Carmen Miranda get-up, looks a heck of a lot like this pattern. 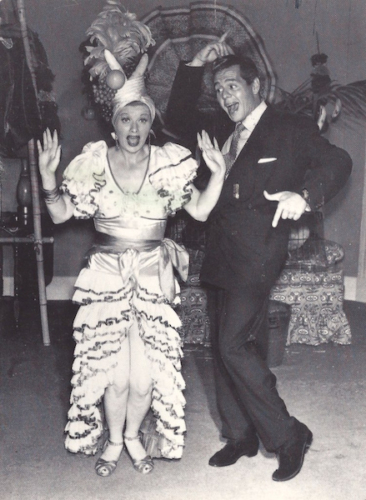 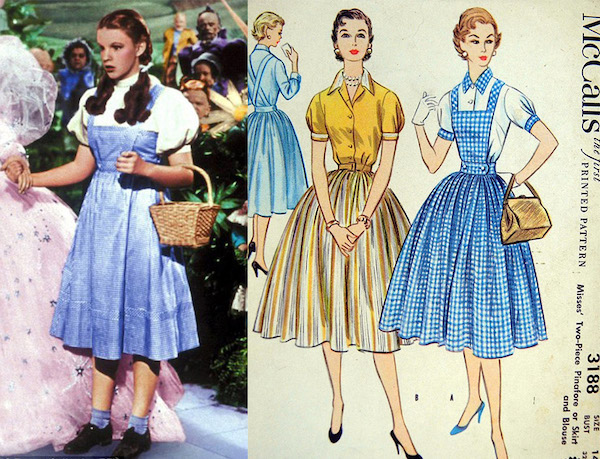 One of the things I discovered about The Wizard of Oz (1939) when I started this little project was that even though it was such a major Hollywood success, there was NOTHING in the way of pattern tie-ins in the few years after it premiered (unlike it’s competitor that year, Gone With the Wind). The first direct reference to any of the costumes in The Wizard of Oz that I was able to find is actually the 1950s pinafore you see here. The undated McCalls pattern is TOTALLY referencing the iconic blue gingham frock worn by Judy Garland as Dorothy and yet there’s no actual connection to the movie anywhere on the pattern. Not that there really needs to be, but for it to be such an obvious tie-in without any branding is interesting. There may have been a re-release of the film in the mid-’50s that inspired the pattern with an updated 1950s silhouette, but again, no connection here aside from the fact that everyone on the planet born in the last 100 years knows this is TOTALLY THE SAME DRESS. 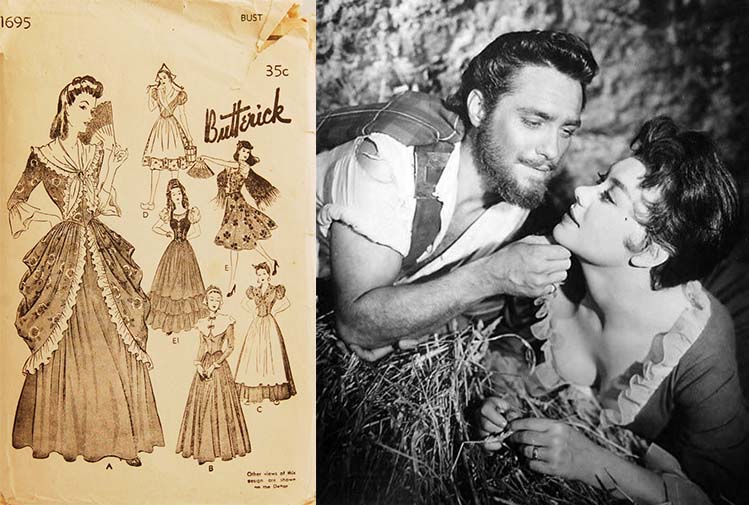 There were a spate of 18th-century themed films that came out in the early 1950s, but one of the most memorable ones was Disney’s Rob Roy: The Highland Rogue, starring Richard Todd as the eponymous highlander. While this Butterick pattern doesn’t directly tie itself to the film, it was released around the same time. Similar patterns by Simplicity were also released between the years 1952 to 1953, indicating that the market value of this particular era was pretty high at the time. 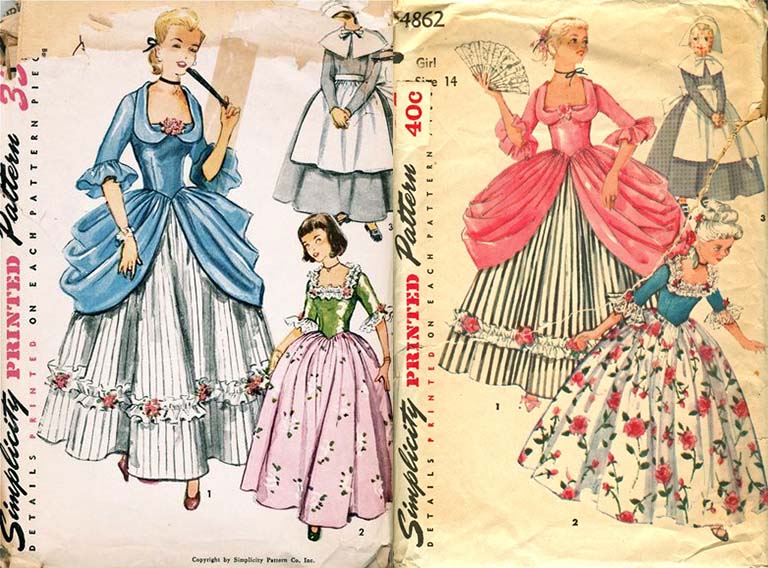 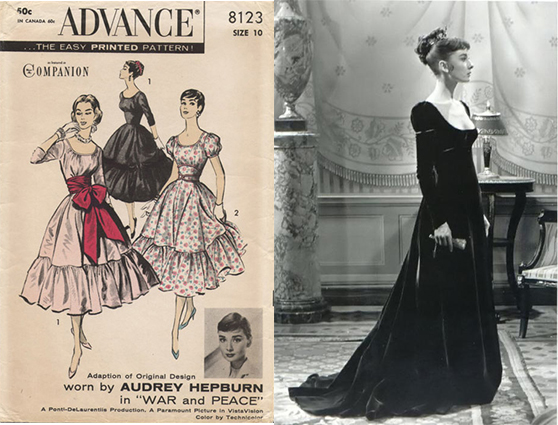 Not quite sure how these designs relate to the film, which is set in the Napoleonic era, but whatever. You can see how the pattern company cleverly made “Adaptation of Original Design” much smaller than “worn by AUDREY HEPBURN in ‘WAR and PEACE’,” making it look to anyone not familiar with the movie that it was actually something worn in the movie. Nope, it’s just inspired by it. Sneaky pattern company. 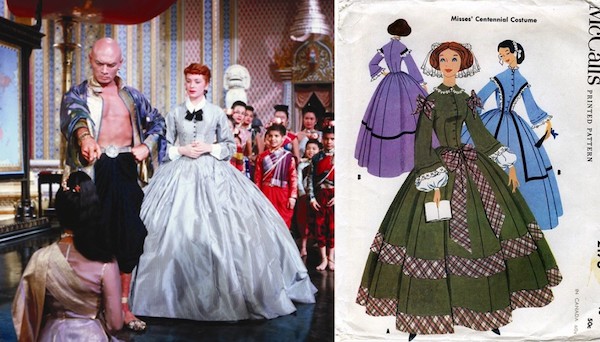 Boy, oh, boy. This one was a biggie, and I almost neglected to include it. So, the 1950s, particularly the middle to the end of the decade, saw several big-budget Civil War/1860s era films released, but none of them became the cultural juggernaut as Rogers and Hammerstein’s The King and I. Starring Deborah Kerr as the feisty and independent Englishwoman who sails to the exotic land of Siam to bring Western Education (TM) to the gorgeous court of the Siamese king, played by the gorgeous Yul Brenner, this was a big, BIG film. Part musical, part forbidden love story, and 100% fantasy, the entire production is sweeping and grand and pretty much as Hollywood as it gets.

It also sets us up for… 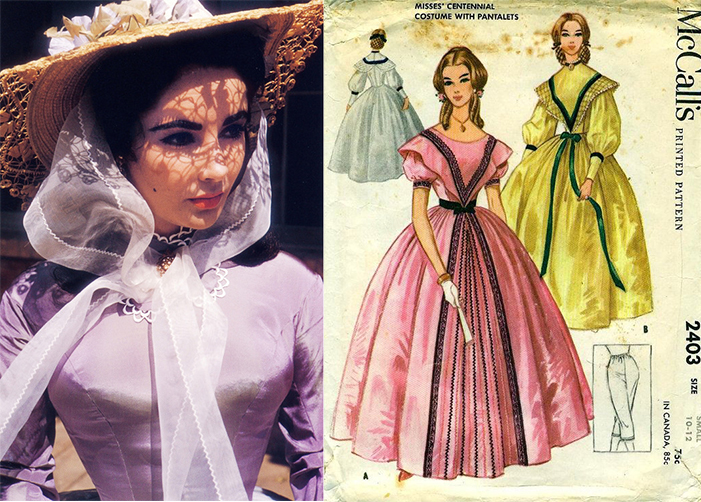 While not a single movie exactly, it’s rather several movies that were issued marking the 100 year “celebration” (I guess?) of one of America’s bloodiest wars. Raintree County (1957), How the West Was Won (1962), Disney’s telefilm Johnny Shiloh (1963), and Shenandoah (1965) all contributed to the general national excitement over the Civil War, not to mention the entire Spaghetti Western genre (of which my parents were particular fans. They went to a drive-in for their “honeymoon” and saw The Good, the Bad, and the Ugly before Dad shipped out to Vietnam. Like you do). So, while this pattern wasn’t based on any one particular film, it definitely follows 1960s America’s interest in the 1860s was developing into more areas of historical costume than previously. 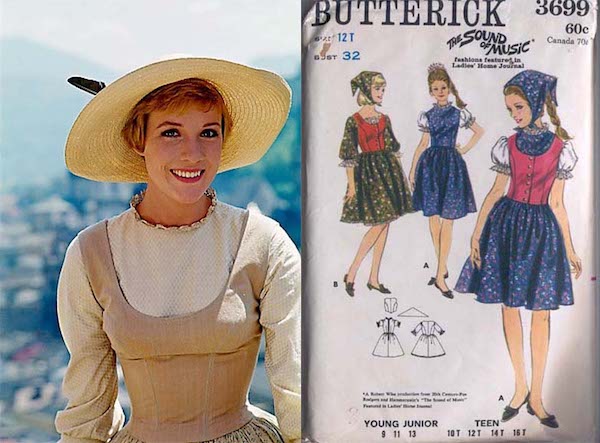 So, in case you weren’t aware, this was this little film called The Sound of Music that came out starring this chick named Julie Andrews, and she runs around the Austrian mountainside being all irrepressible and charming with a pack of children. There was some singing a song about deers and getting packages tied up with bows and a flower or something, but yeah, no one really paid much attention to it, so you’ve probably never heard of it.

Butterick introduced this pattern based (loosely) on the quasi-national dress of Austria as a tie-in with the film version of the musical. I wonder how many of these patterns were modified for renaissance faire costumes in the mid-to-late ’60s?

If you thought the Civil War Centennial was a big deal, OH MAN, you have no idea what it was like to be alive during the run-up to the American Bicentennial (1776-1976). In fact, I fully confess that I actually missed the bicentennial by a couple of years (I was born 1978), but I can assure you that the seismic waves of national pride were still being felt well into the 1980s to such a great extent that I feel like I really didn’t miss it. I must have seen the video of the July 4th, 1976, fireworks display over the Statue of Liberty at least a thousand times before I hit puberty. And whatever we may have tried to bury in our collective memory, the 1990 move Spirit of ’76 wouldn’t let us forget just how insane America went for its 200th birthday.

Anyway, to mark the occasion, several films and TV miniseries were put out during the ’70s. Everything from the musical 1776 (1972), to the BBC’s Poldark (1975), to the critically acclaimed US miniseries Roots (1979). Accordingly, there was a sudden glut of 18th-century “colonial” patterns on the market to chose from. Some of them were simply reprints of earlier patterns with updated package art, while others were created specifically for the celebration. If you want a good idea of how many patterns were marketed for the bicentennial, just check out the Etsy search results for “bicentennial patterns.” Forty years later and we’re still trying to dig ourselves out from under the avalanche of bicentennial branding. 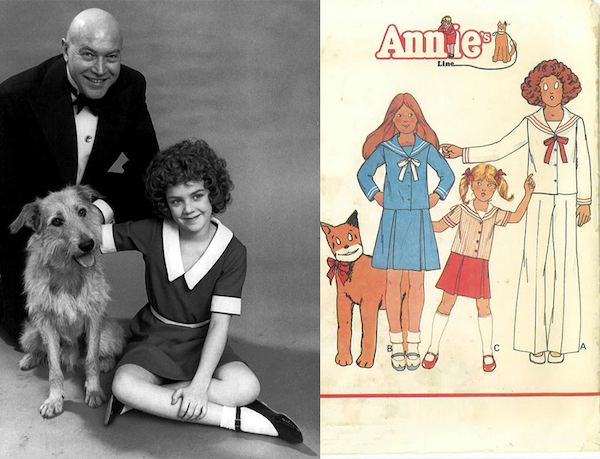 The musical Annie debuted in 1976 to insane levels of acclaim. The film version followed in 1982 to even more insane levels of acclaim until the entire planet was pretty much had “The Sun Will Come Out Tomorrow” as a permanent earworm. As someone who was entering prime Annie-consumerism territory by 1982, I personally owned an Annie dress and an Annie wig and knew every single song off the record like it was part of my DNA. McCalls released two pattern lines in the late-’70s, ahead of the film release, called “Annie Clothes Line” for girls and “Annie Too!” for women. The designs were basically late-’70s everyday wear, and it wasn’t until the film was released that actual screen/stage costumes were reproduced by the major pattern companies. 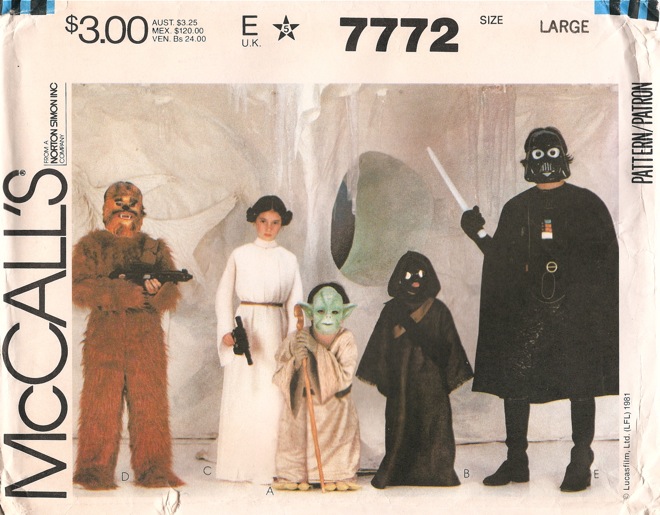 There are no words.

If you enjoyed this little trip down memory lane and want to learn more about the patterns mentioned here, check out the Vintage Patterns Wikia for more info!

Did you actually have a costume made from any of these patterns? Share it with us in the comments!