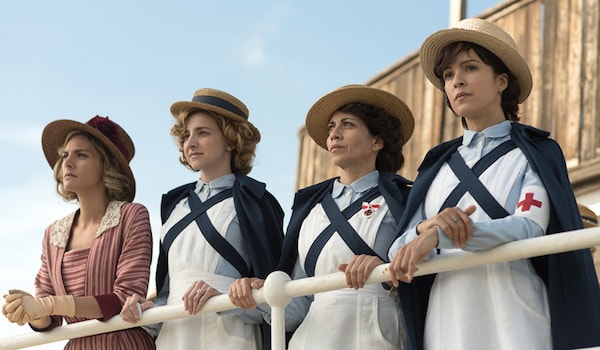 Morocco: Love in the Time of War (2017) is the clunky English title given to Spanish production Tiempos de Guerra, which recently premiered on Netflix. The TV series tells the story of some Spanish nurses who are serving in Morocco during the Rif war (1920-27). The Rif war took place in a region of northern Morocco and was basically Moroccans from that region fighting against Spanish colonial takeover (France later got involved, it’s complicated, google it if you want to know more).

The series starts in 1921, when the war is getting bad and medical staff are desperately needed. Main character Julia has just volunteered to be a nurse — her brother and fiancé are fighting. Just as she signs up, her unit is sent into service and her brother and fiancé’s battalion go missing during a battle; she basically sneaks onto the train and talks the head nurse into letting her serve.

None of the nurses have any real war experience, so although Julia is the least trained, there’s lots of “oh holy crap what are we doing here” going on. 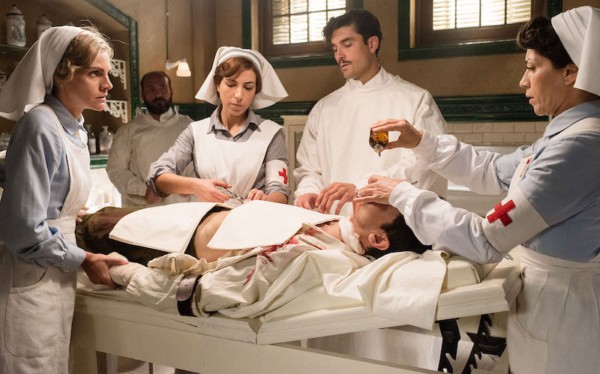 Yes, there’s some of this…

Of course, the plot thickens as Julia has an instant connection with hot (engaged) doctor Fidel, fellow nurse Magdalena (all ditzy blonde and also engaged) has an instant connection with Moroccan Larbi, and Pilar is confronted by the man who left her at the altar eight years ago. On top of everything, extra-competent and badass head nurse Carmen has a mystery illness that she’s keeping from everyone. Soap opera, here we come! It’s well filmed, well acted, and so far I’m entertained. (Side note, I was horrified to start watching it and hear OTT American accents, then very relieved to realize there were multiple audio tracks, and I could watch it in its original Spanish audio with English subtitles as, you know, any civilized person should do.)

Here’s what you need to know about Morocco: Love in Times of War:

The Boys Are HOT

First, and most important IMHO, the main male love interest characters are HOT HOT HOT HOT HOT. Okay, so I have a thing for dark-haired, Mediterranean men. Seriously, I am ready to throw my undies at the TV screen for: 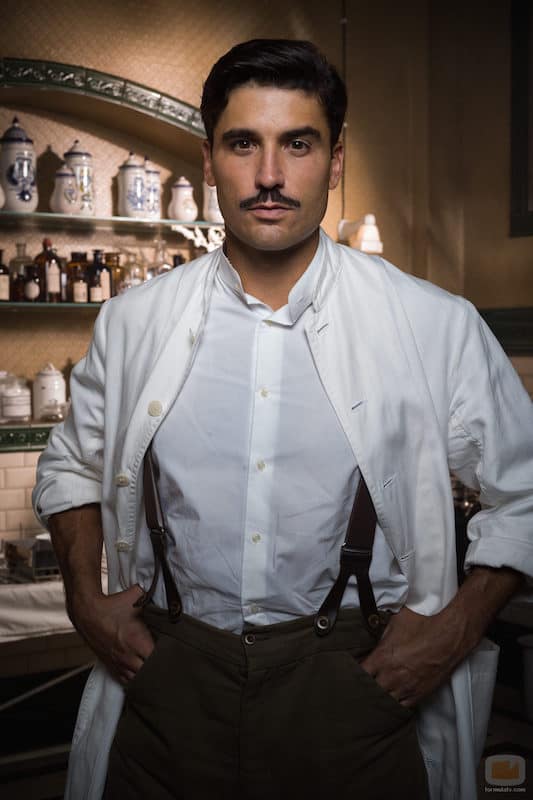 Doctor Fidel, who is drawn to Julia as she is to him… 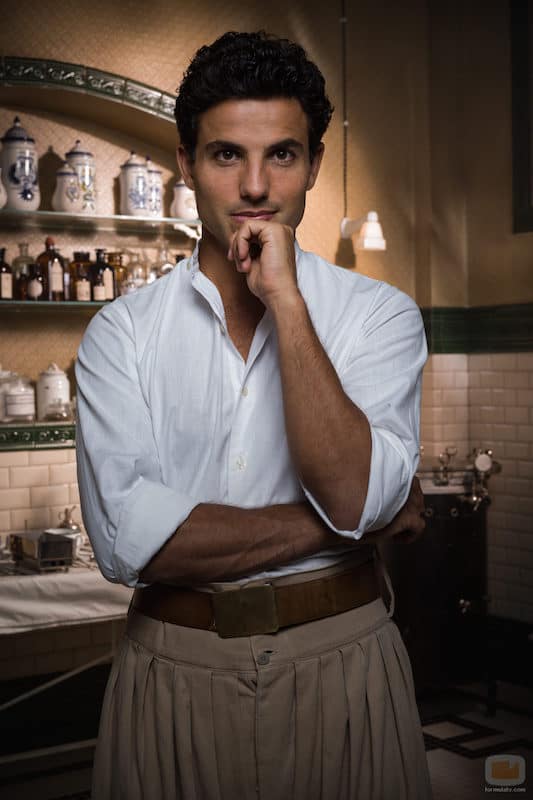 Larbi, Moroccan connecting with Magdalena when he should be CONNECTING WITH ME. 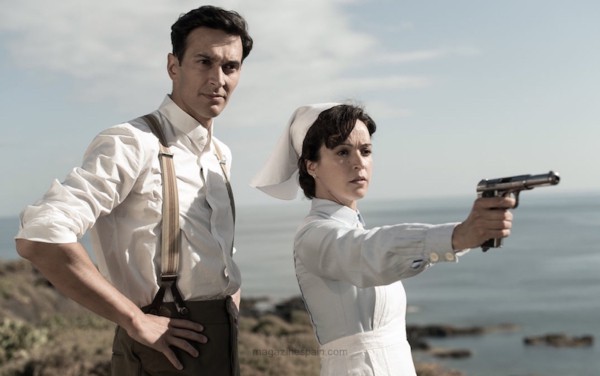 Luis, doctor and ex-fiancé to Pilar, whose height and floppy hair are keeeeling me!

Now that the most important stuff is out of the way…

The Costumes Are Pretty Good!

The series starts in 1921, and I’m glad to see an appropriately early 1920s look — no mid-1920s dropped waists and short skirts here, what you’ve got is appropriately much closer to a late teens look than your mental image of “Twenties.” The main issue I have is that most of the dresses don’t use enough fabric. The big change you get between late teens and early twenties is some loosening of the overall silhouette (and a little bit of hem rise, but not much). Now, of course, I can imagine that despite being very upper class, these ladies’ wardrobes might be slightly out of date given that there’s a war on. But…? 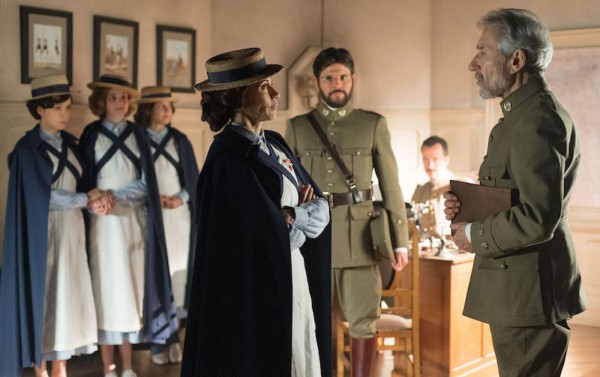 Okay, so you’ve definitely got a lot of uniform scenes. 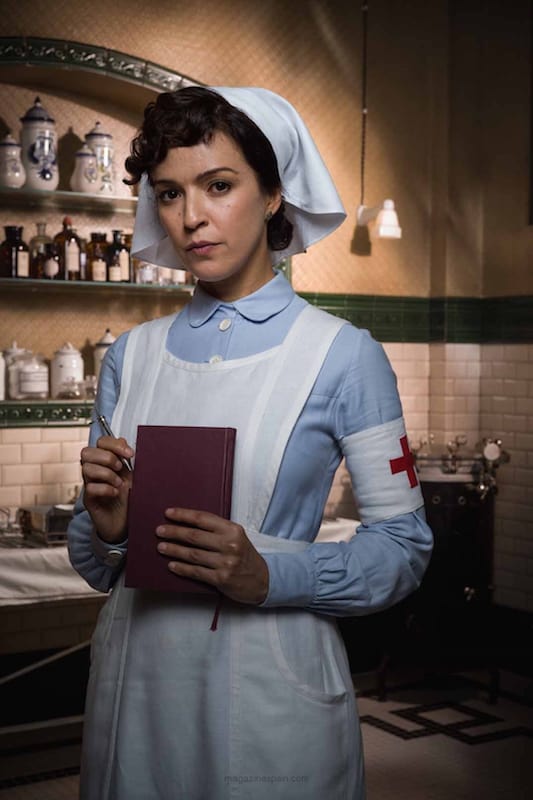 And I have no idea how accurate they are and I don’t care! 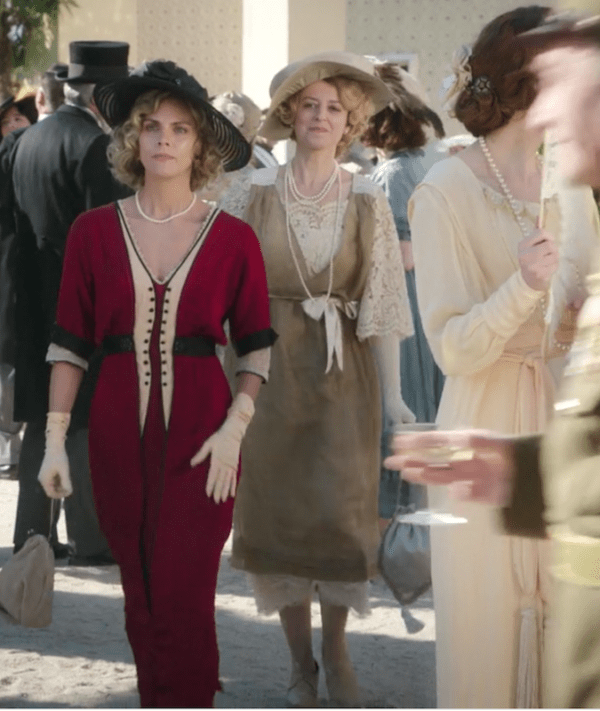 These are all upper-class ladies. Here’s lead Julia (red) with mom in tow. Why is mom’s hemline so much shorter than her daughter’s? 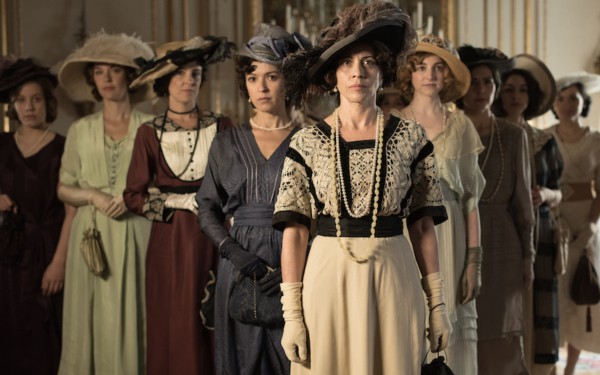 That’s badass head nurse Carmen in front. Lovely dresses that could totally pass for late teens, but that’s right on for the era. 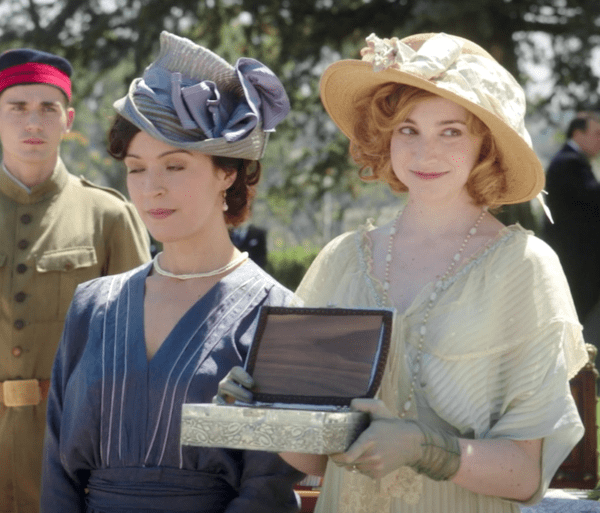 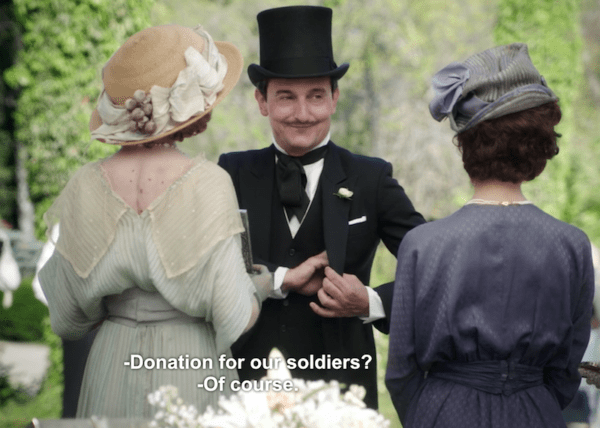 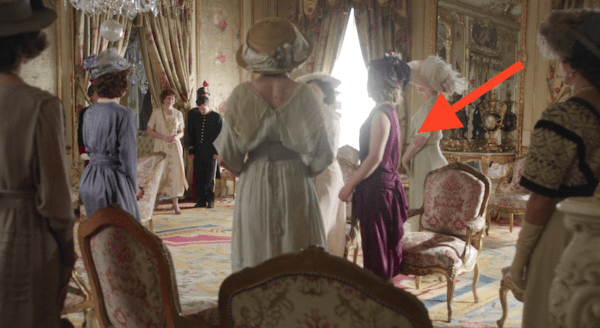 So far I’ve only spotted one clunkily dressed extra! Did she think this was a “flapper” murder mystery dinner? You can’t see it, but her hemline is about 4″ higher than everyone else’s. 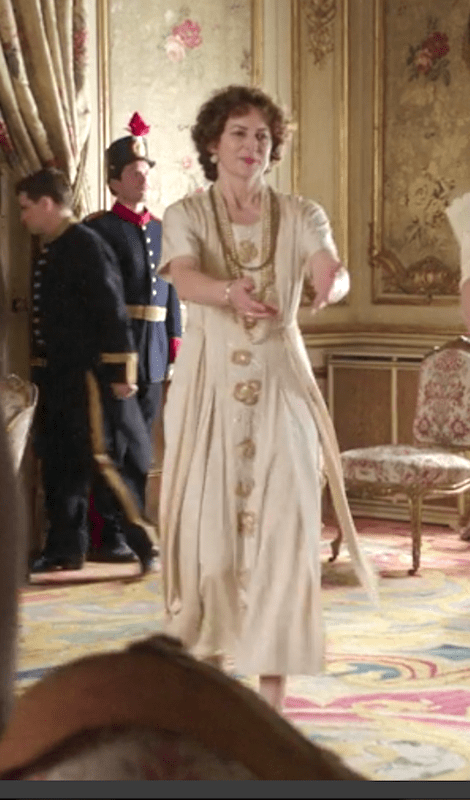 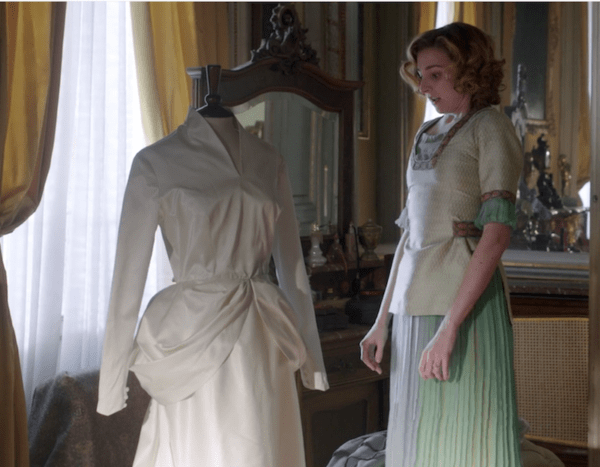 I loved this tunic-y look on Magdalena, although her wedding gown (on the dress form) looks awfully late 1940s New Look… 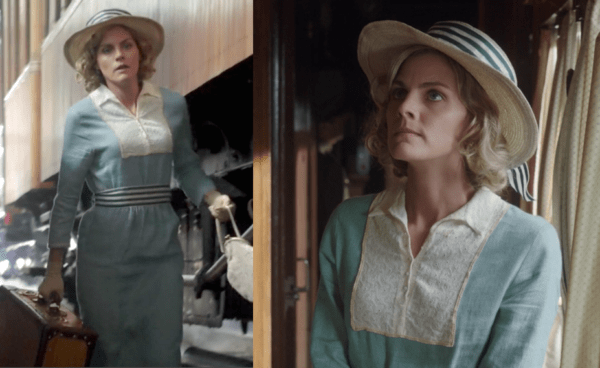 Here’s where we start getting into Not Enough Fabric Land — mostly on lead Julia, so maybe it’s Leading Lady Syndrome? 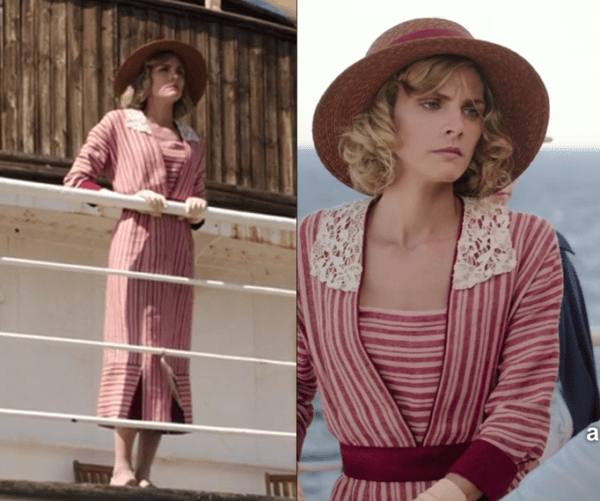 The skirt should be much fuller imho! 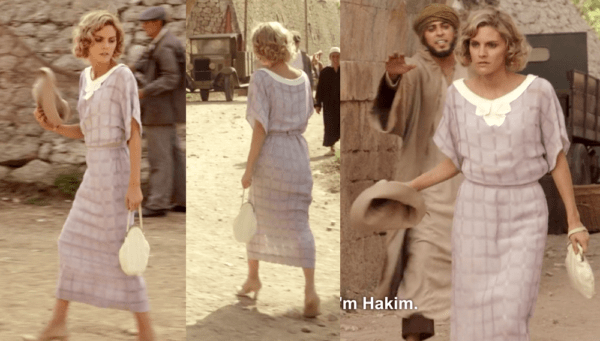 This one in particular just seemed 1930s maybe? 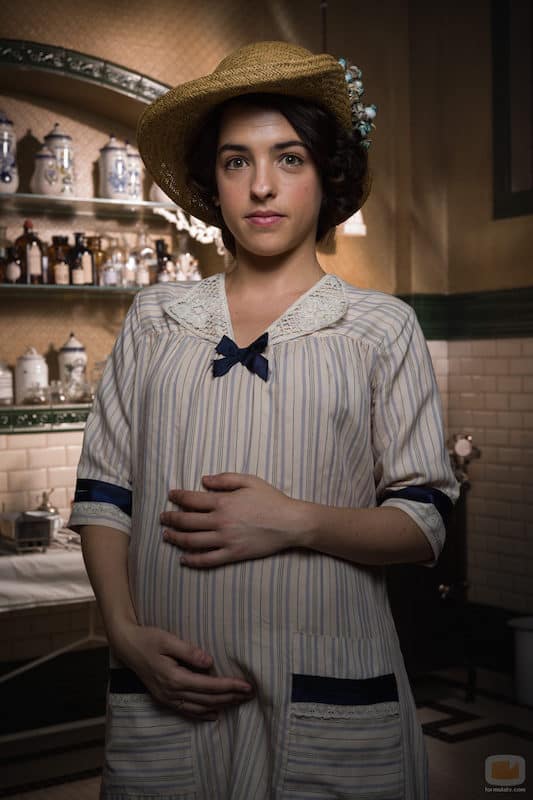 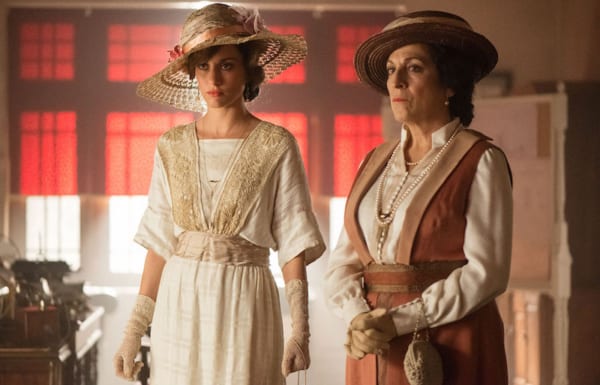 The Hair Is a Mixed Bag

The bob meets beachy waves! They’re KIND OF going for a Marcel wave on some of the ladies, but really it’s a slightly more done beachy wave, and they’re not fooling me. That being said, some of the ladies still wear long hair, and it’s styled very nicely in that faux-bob updo thing that’s totally right for the period. 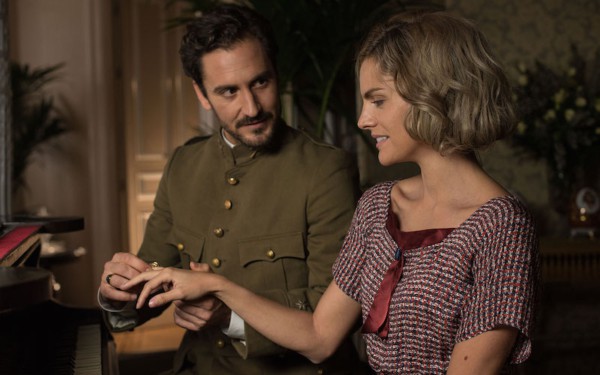 That is not what a Marcel wave looks like. 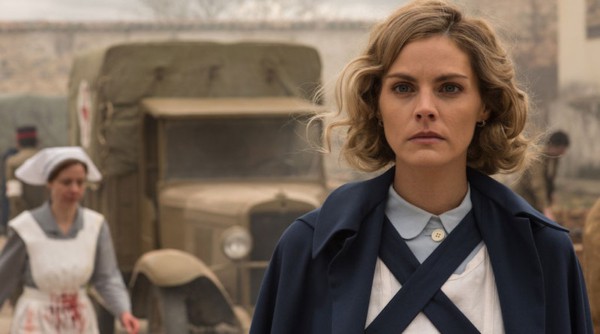 I mean, points for a strongish wave at the temple, but that’s it! 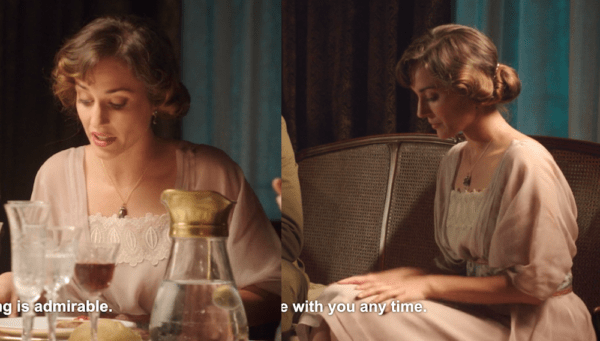 On the other hand, Susanna’s faux-bob updo is right on!

Are you watching Morocco: Love in Times of War?